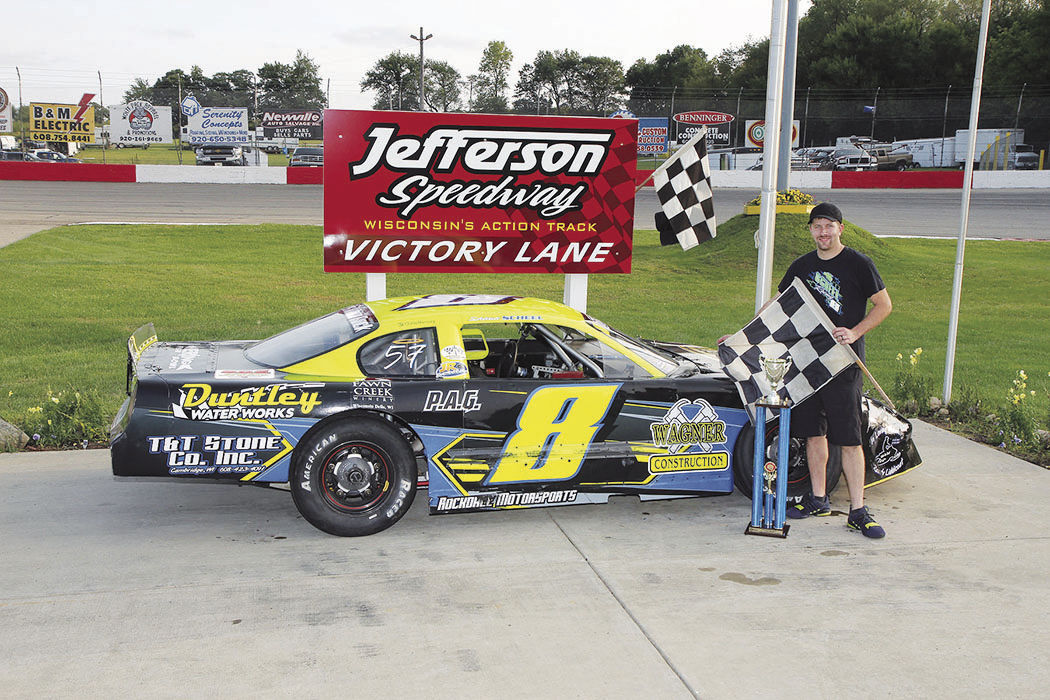 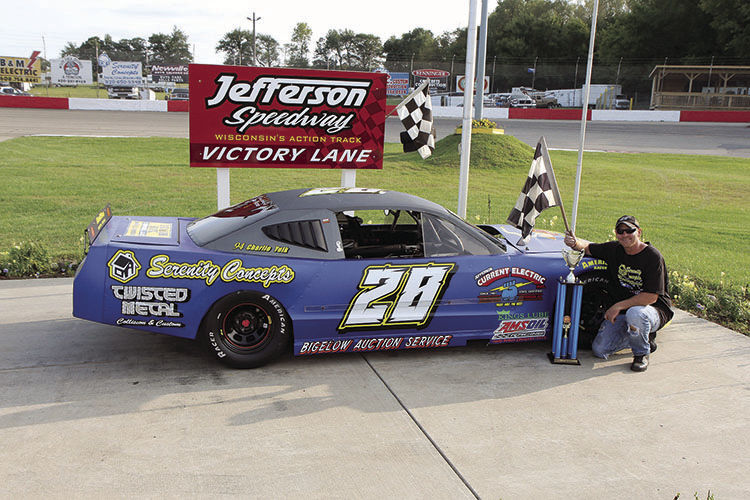 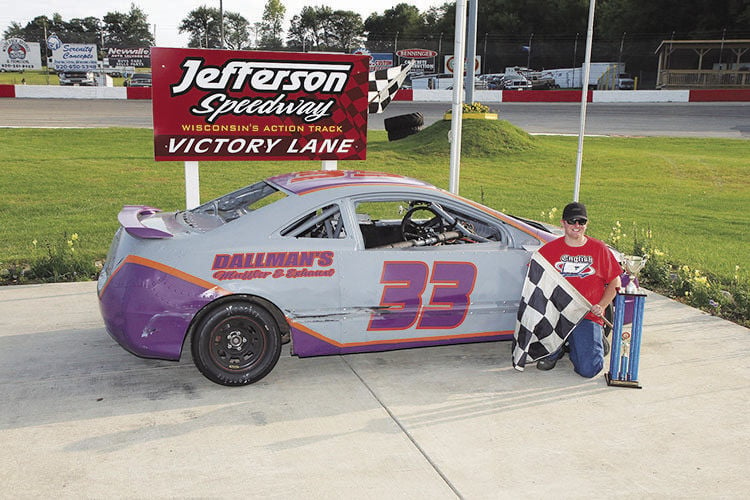 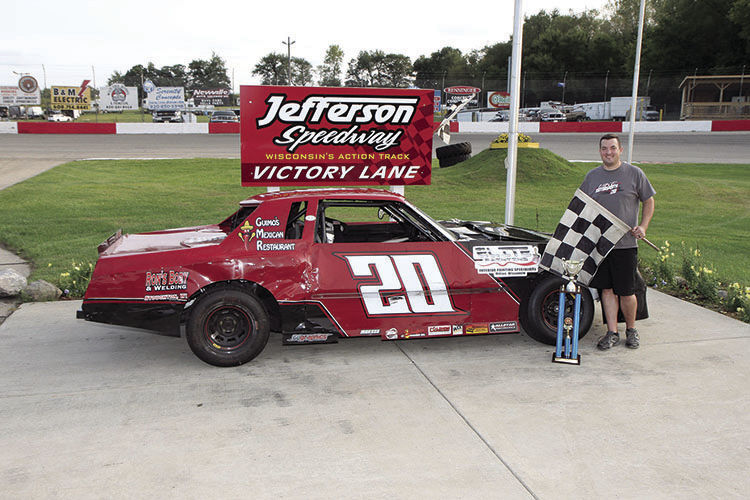 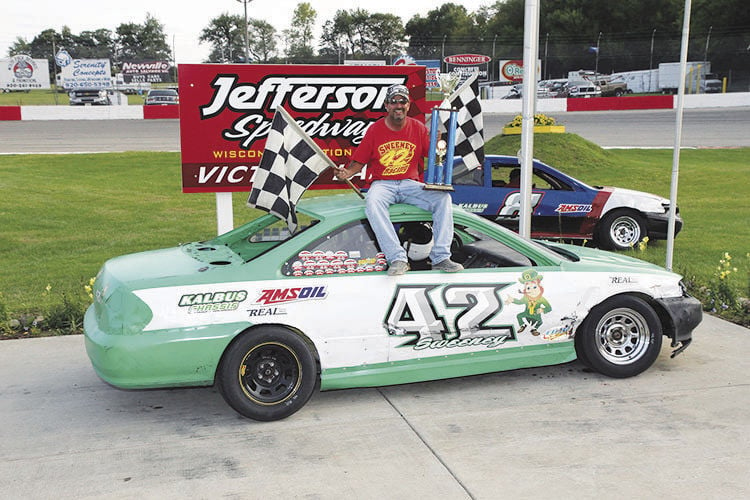 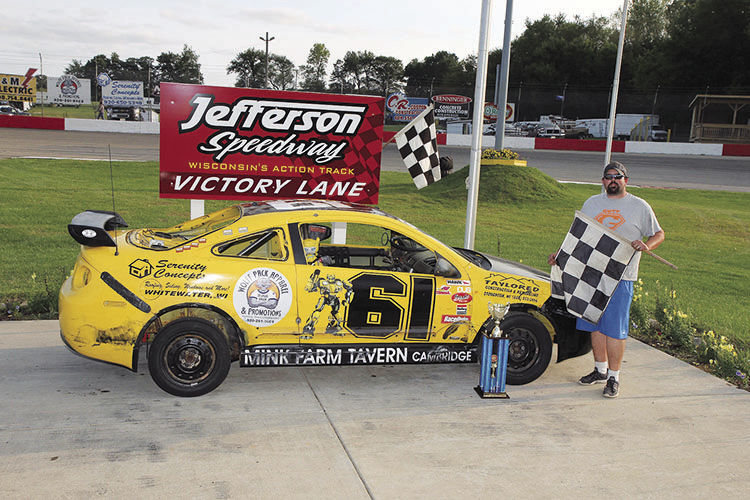 CAMBRIDGE— While Shaun Scheel was putting the finishing touches on the 2020 Late Model track championship, it was Cambridge driver Dale Nottestad, who laid claim to the Griffin Ford Lincoln season championship 60-lap feature event. With Scheel’s third-place finish in the main event, he wrapped up his second consecutive Late Model crown at Wisconsin’s Action Track.

The 2020 Season Championships started on Saturday, but had to be finished Sunday due to rain.

Kyle Taylor and Lincoln Keeser paced the field to green as they battled for control in the opening laps. On lap four, contact between the two competitors resulted in the first caution period of the races, sending both to the rear of the field for the restart. Kyle Smith and Craig Phillips led the pack back to green with Phillips moving to the lead on the restart. Chris Chenoweth and Dylan Schuyler slipped by Smith for second and third with Schuyler quickly challenging Chenoweth for second. On lap nine, contact between Smith and Chenoweth forced another yellow as they also collected Jason Erickson.

Phillips once again moved out front on the restart with Shaun Scheel sliding up to third. Two more quick cautions on lap 11 set up Phillips and Scheel on the front row for the restart. This time, it was Scheel getting the jump as he drove his machine into the lead. On lap 20, Dale Nottestad charged up alongside Phillips to grab the second position away and begin closing in on Scheel at the front. By lap 31, Nottestad was pressuring Scheel, getting under the leader as they entered turn one. A lap later, Nottestad cleared for the lead as the leaders raced toward the checkers. But a final yellow flag on lap 52 set up an eight lap shootout to the finish with Nottestad and Scheel restarting side by side.

After a brief battle once racing resumed, Nottestad moved back into control while Scheel dropped back into a battle with Seth Reamer for second. Reamer took the position on lap 58, but Nottestad was already on his way to the checkers to collect the win. Reamer finished second ahead of Shaun Scheel, Stephen Scheel and Luke Westenberg.

Starting on the pole, Lambert jumped into the lead as the green waved over the field. Craig Henning and Tytus Helgestad battled for second with Helgestad taking the spot on lap two. Jim Taylor followed into third and began to work on Helgestad for second. On lap nine, Taylor drove under Helgestad, grabbing the second spot a lap later and bringing Bobby Selsing Jr. along for third. Selsing began to shadow Taylor while Lambert remained in control out front.

On lap 30, contact between Selsing and Taylor forced Taylor to check up and allow Selsing to get by. Taylor crossed over in an attempt to reclaim the second position, but Selsing kept him at bay in the closing laps.

At the checkers, it was Lambert for the convincing win with Selsing coming home second. A last lap altercation allowed Chris Jones to move up to third with Mark Deporter and Robert Hansberry Jr rounding out the top five. With his fourth-place finish, Mark Deporter of Fort Atkinson laid claim to his second consecutive Sportsman championship as well as his fourth title overall.

Josh Rusch led early from the front row. After an early caution, Mark English moved up to second with Stark quickly charging through the field toward the front. On lap 15, Stark returned to the point with Tyler Deschaine up to battle English for second. Deschaine made the pass on lap 20, but ran out of laps to catch Stark at the front.

At the checkers, it was Stark for the win followed by Deschaine, English, Josh Marx and Nick Schmidt.

Shane Radtke grabbed the early lead on lap one as he began to stretch his advantage over Chuck Egli and Scott Riedner, who were battling for second. A caution on lap four slowed the pace, pitting Radtke and Egli on the front row for the restart. Radtke moved back out front while Janssen began working the high side in an attempt to move forward. Janssen pulled into second just before the second caution waved over the field.

Radtke and Janssen paced the field back to green. Radtke returned to the top spot with Janssen trying to mount a charge back alongside the leader. On lap 14, Radtke got out of shape in turn two, allowing Janssen to slip by for the lead. Jared Vike followed a few laps later with Brandon Riedner in his tracks. Vike and Riedner waged war for the second position in the closing laps with Riedner getting the spot.

But Janssen crossed the stripe first to secure the win. Riedner was second followed by Vike, Radtke and Jim Tate Jr. With his third-place finish, Jared Vike of Lannon claimed the 2020 Hobby Stock track championship.

In Road Warrior action, Watertown’s Bill Reynolds came out on top after the 15-lap feature event.

Reynolds grabbed the lead on lap one with Bill Sweeney quickly up to challenge. Sweeney got a look under Reynolds on lap five, but was unable to complete a pass, falling back into second with AJ Accardi up to third. The top three ran single file over the remaining laps with Reynolds crossing under the checkers first for the win. Sweeney was second with Alex Noel, Jim Ronspiez and Accardi rounding out the top five.

While Nick Schmidt was laying claim to the 25-lap Bandit feature event, it was Fort Atkinson’s Chris Gottschalk picking up his first-career Bandit track championship.

Jon Petit led early with Ashlynn Jarlsberg up to challenge for the lead on lap seven.

At the checkers, it was Schmidt for the win followed by Stark, Jarlsberg, Petit and Gaven Smothers.WISCONSIN STATE CHAMPIONSHIPS

Next weekend, September 18-19, is the 40th annual Wisconsin State Championships with a full slate of racing on both nights. Please check out jeffersonspeedway.com for more information. Jefferson Speedway is located halfway between Jefferson and Cambridge on Hwy 18.