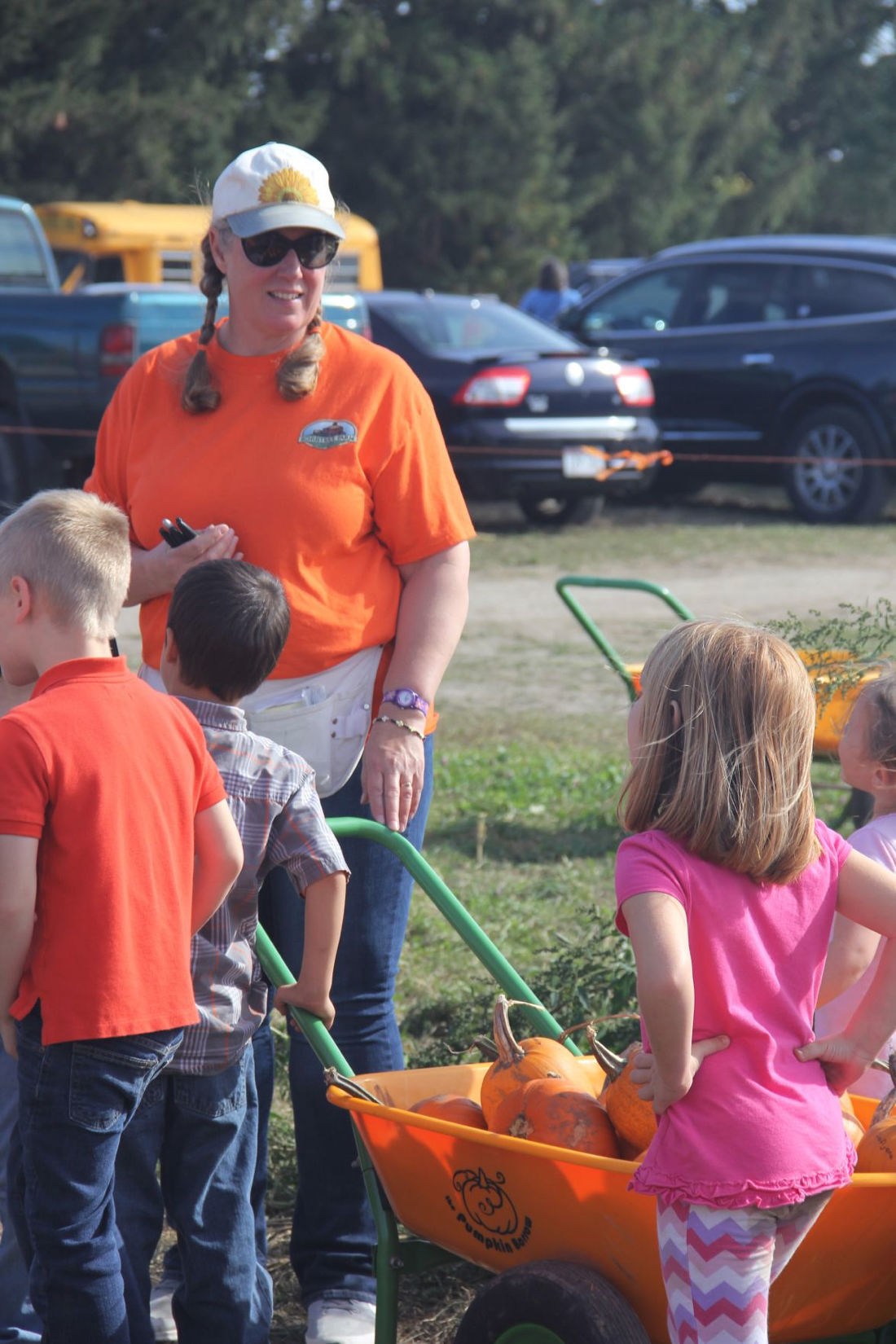 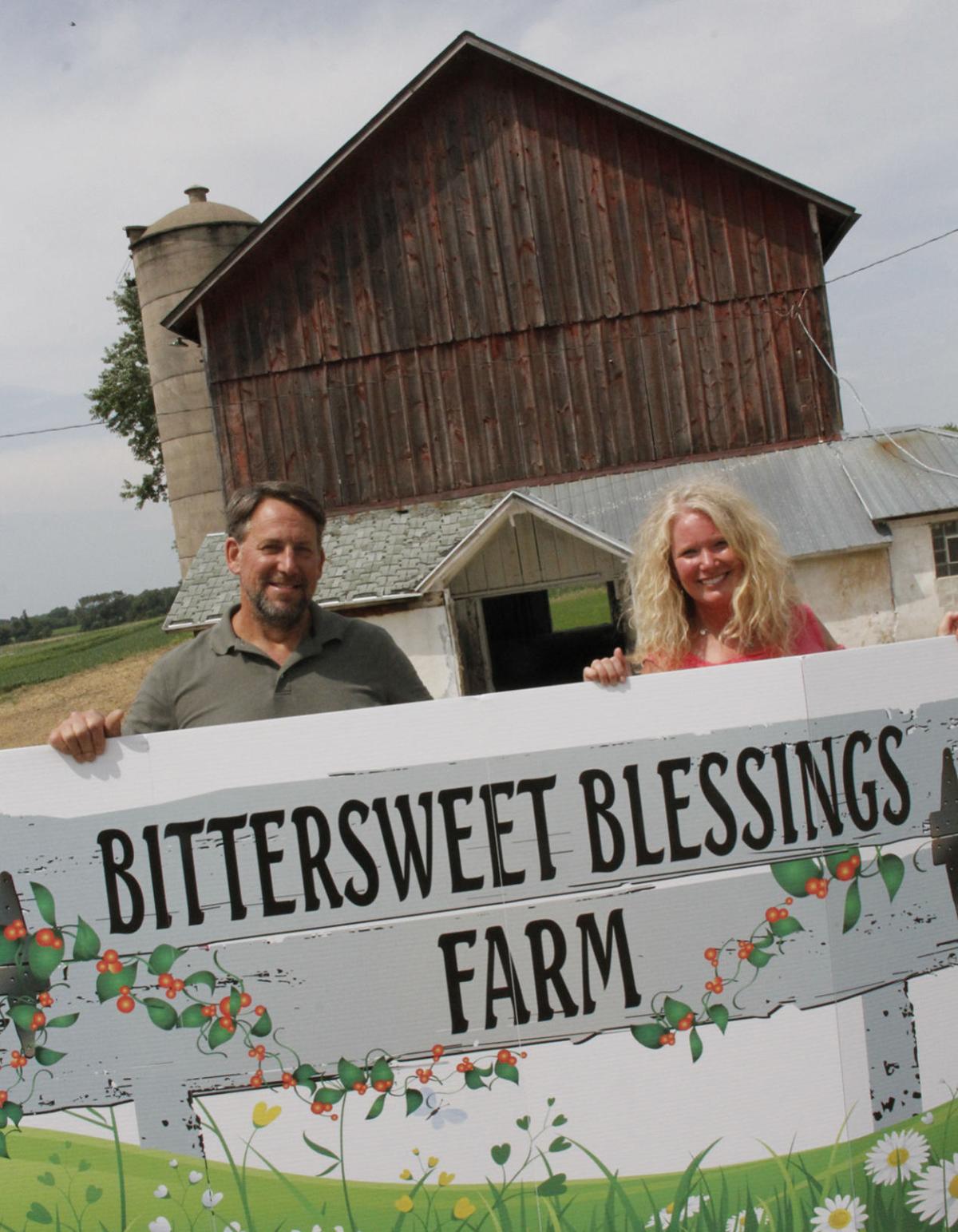 Jeff Moerke and Elizabeth Tebon-Moerke get set to host more than 100 vendors at their Deerfield Market Expo, set for Aug. 4, 2019, on their farm near Deerfield. The farm has canceled two summer Market Expos for 2020 due to COVID-19 but is still planning on hosting a Deerfield Apple Fest in October. 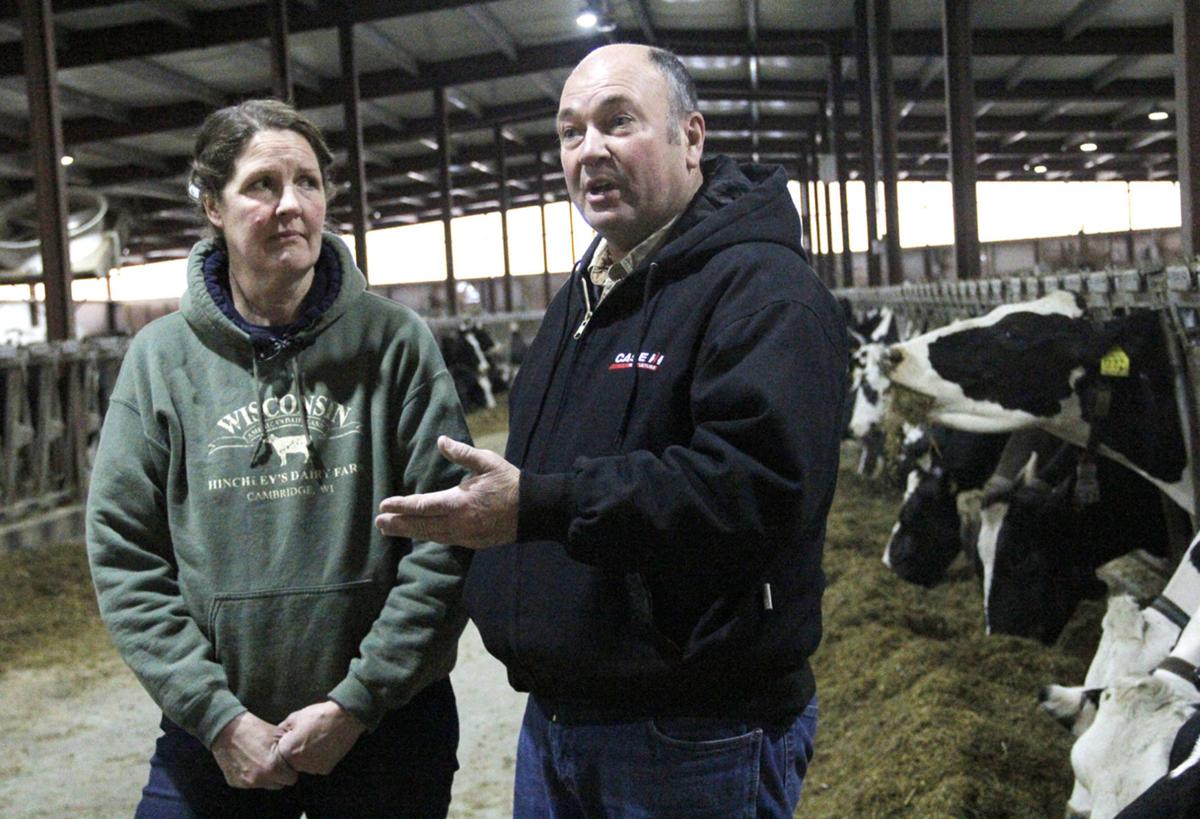 Tina and Duane Hinchley speak at their Cambridge dairy farm Jan. 29, 2020, about how the new United States-Mexico-Canada Agreement may benefit Wisconsin dairy farmers. 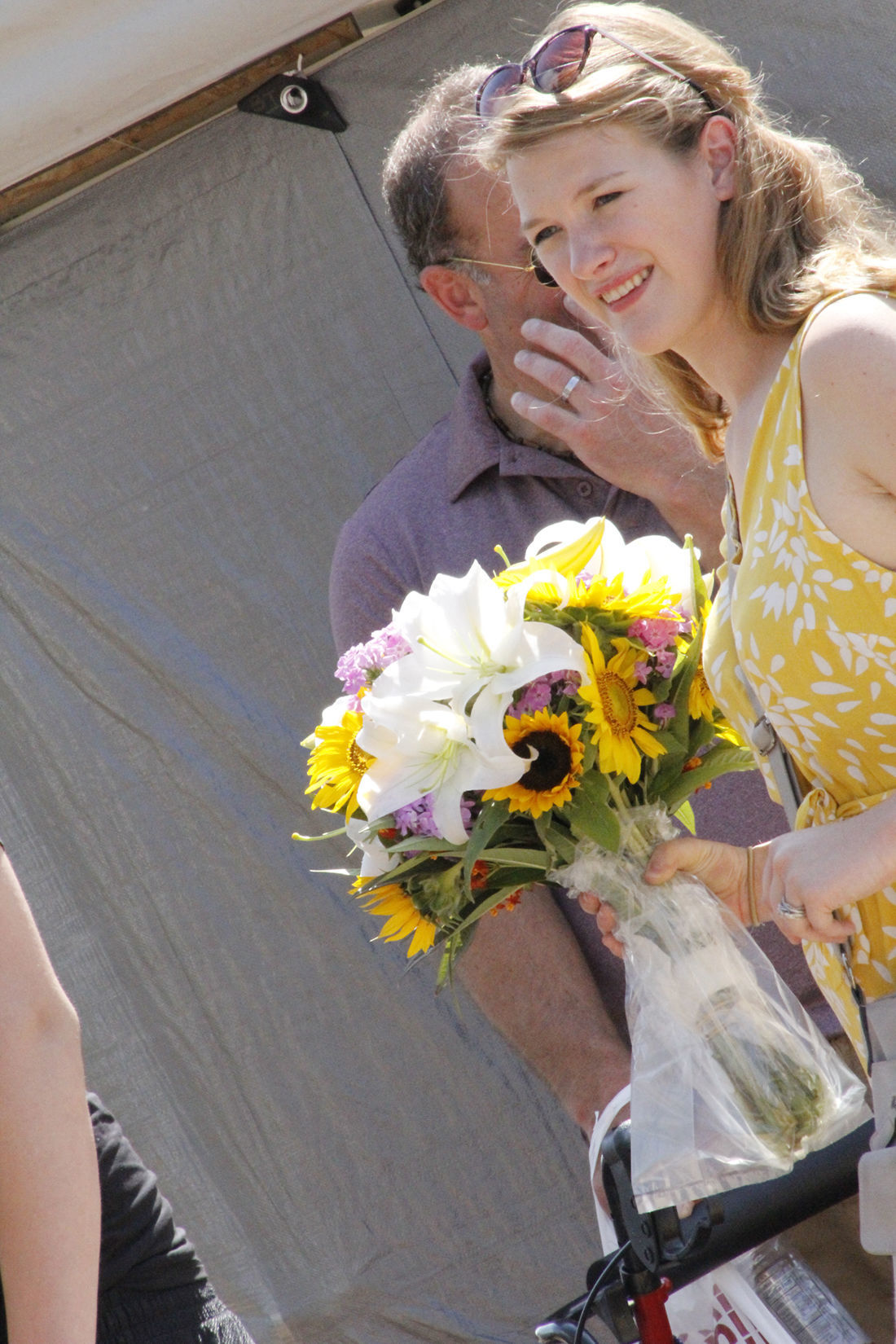 Right: A visitor buys a flower bouquet at the Deerfield Market Expo in 2019. Above: A school tour enjoys Schuster’s Playtime Farm in 2017.

Jeff Moerke and Elizabeth Tebon-Moerke get set to host more than 100 vendors at their Deerfield Market Expo, set for Aug. 4, 2019, on their farm near Deerfield. The farm has canceled two summer Market Expos for 2020 due to COVID-19 but is still planning on hosting a Deerfield Apple Fest in October.

Tina and Duane Hinchley speak at their Cambridge dairy farm Jan. 29, 2020, about how the new United States-Mexico-Canada Agreement may benefit Wisconsin dairy farmers.

Right: A visitor buys a flower bouquet at the Deerfield Market Expo in 2019. Above: A school tour enjoys Schuster’s Playtime Farm in 2017.

Don Schuster says he’ll plant pumpkins in May as always, and put in the corn for his corn maze, two key pieces of what draws thousands to his family’s Deerfield farm every fall.

“As of right now, we are going full steam ahead,” with plans to open in late September, including having a haunted forest, in hopes that COVID-19 restrictions on large gatherings will have been lifted by then, he said.

Schuster and his wife Theresa have operated Schuster’s Playtime Farm on U.S. Highway 12-18 for more than 25 years, with a large regional draw.

Meanwhile, two other local farms with tourism focuses, one that has long hosted school and bus tours, and another that would have opened in June for its second season of outdoor vendor markets, are waiting until late summer and fall to again welcome visitors.

Tina Hinchley, owner of Hinchley’s Dairy Farm Tours on State Highway 73 near Cambridge, said she’d normally be booked solid in May with school tours and would be starting to anticipate summer bus tours.

Those have been completely halted due to COVID-19, she said, with her next tour bookings not until in August. The Hinchley family additionally announced last week that the annual Dane County Breakfast on the Farm, that they were to host on June 13, has been rescheduled to Aug. 1.

And the owners of Bittersweet Blessings Farm on U.S. Highway 73 north of Deerfield, who drew large crowds to their first-ever Deerfield Market Expo in August 2019, have now canceled two summer events but are still hopeful that a fall apple fest will go on.

In an interview this week, Don Schuster said he is proceeding “as if we are going to be open,” on schedule with seasonal hiring for farmhands and haunted forest actors still expected to happen in August and early September.

If restrictions on large gatherings aren’t lifted by its normal, late September opening date, the farm could operate on a limited basis, Schuster said. That might include a drive-through pumpkin patch and a bakery with curbside pick-up, he said. Even the haunted forest might be possible under social distancing rules, with limited numbers and tickets purchased in advance, he said.

As is typical, he said planning for this year’s haunted forest has been underway for a year. The cancellation of a major haunt convention in St. Louis in March, where he and farm staff annually get ideas and buy from vendors, has made those preparations more challenging, Schuster said.

The vendor sales have moved online, but purchases now include shipping, which can be significant, he said.

Schuster said he’s got some ideas for spacing out corn maze rows to allow for social distancing, if it comes to that, although he admits to not being excited about them.

“It’s only the first week of May, so I’m pretty optimistic,” he said. “We won’t be cutting our corn maze for at least a month and a half, and we’ll have a better idea by then of what is going on.”

“Everything’s on the table; if you’re not flexible during times like these you’re not going to make it,” Schuster said.

Schuster’s backed away about two years ago from hosting weddings but still hosts corporate events.

Schuster said he’s proceeding as if corporate parties already booked for August will happen but he’s still working out whether a more public entertainment event he’d been hoping to book will go on. And he’s still weighing whether to expand to Thursday nights this fall, something under consideration before COVID-19.

Schuster said calls are coming in from schools, about booking fall field trips.

“We just got one (call) today. They want to get their dates set,” he said.

In a recent letter to vendors, Bittersweet Blessings Farm owners Elizabeth and Jeff Moerke announced that, “sadly,” it was canceling its June and August Deerfield Market Expos but said it was going “full speed ahead” with an Oct. 4 Deerfield Apple Festival.

The Apple Festival is envisioned to include art and craft vendors, live music, a farmers market, food stands and apple-related family activities including cider pressing and apple butter making. The farm was once a longtime, well-known apple orchard, and the apple trees are still on site.

Jeff Moerke said the June and August cancelations “have just been really difficult,” for the farm owners and Market Expo participants.

“Vendors are really thirsty to get out and do something; they have been making things all winter and are looking for a venue to sell at,” he said. “There are many people for whom this is their livelihood, this is how they support their families and pay their bills, and this has been really tough on a lot of them.”

He said he hopes the Deerfield Apple Festival will bring a crowd back.

In the fall, “we need shoppers to come out, we need vendors to come out. They go hand-in-hand for a successful event,” he said. “With 112 acres we can spread people as far out as they need to be,” to meet social distancing rules if those remain in place, he said.

Beginning in March, the bottom fell out of that.

She said most schools that had booked spring tours never even called to cancel; there was simply a mutual understanding that they were no longer going to happen.

She called the summer bus tours, from as far away as Canada, “a huge part of what we do,” and said those cancelations will go down as just more loss in a series of recent years that have seen milk prices drop precipitously and corn prices now drop as ethanol use falls due the pandemic.

“We thought 2020 would be the year that milk prices went up, that this was going to be our year of recovery,” Hinchley said. Instead, “this is the year that everybody hurts,” no matter their industry, she said.