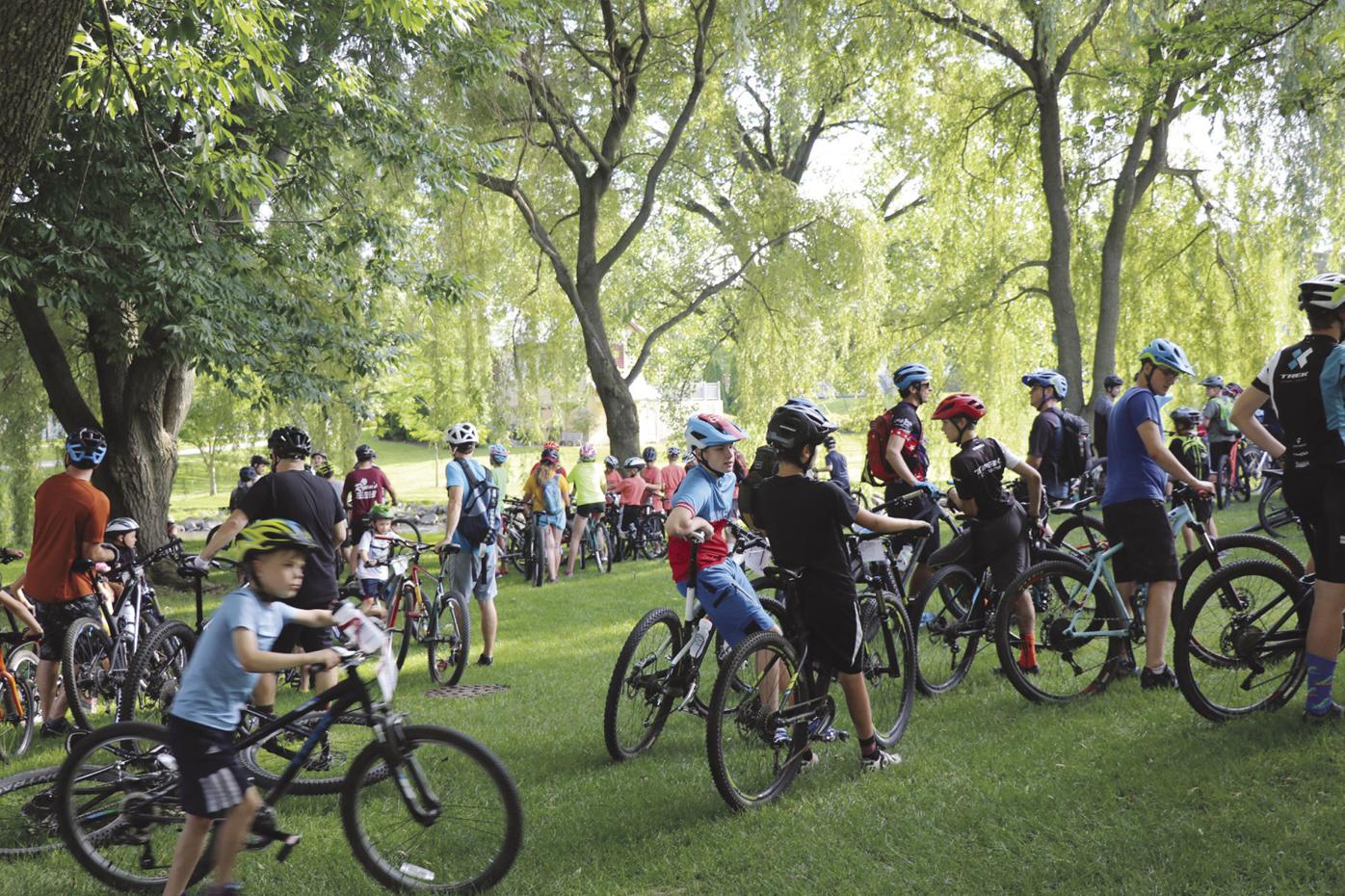 A group of young mountain bikers gather behind CamRock Cafe and Sport in Cambridge last week for the final meeting of this year’s CamRock Youth Mountain Bike Club. 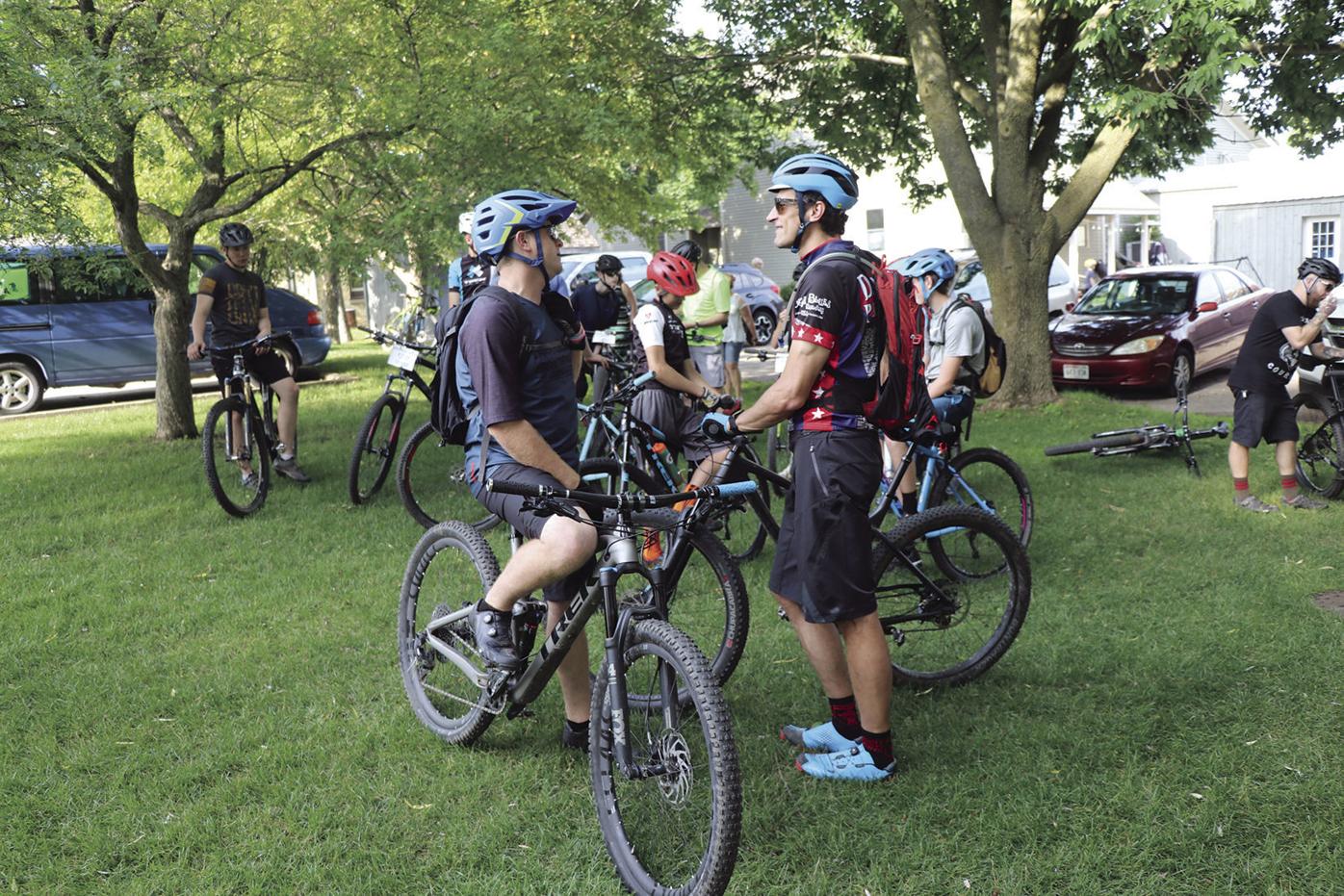 The CamRock Youth Mountain Bike Club’s coaches are all volunteers, many of whom work for Trek, and a significant number of parents participate in the club each week of its duration. 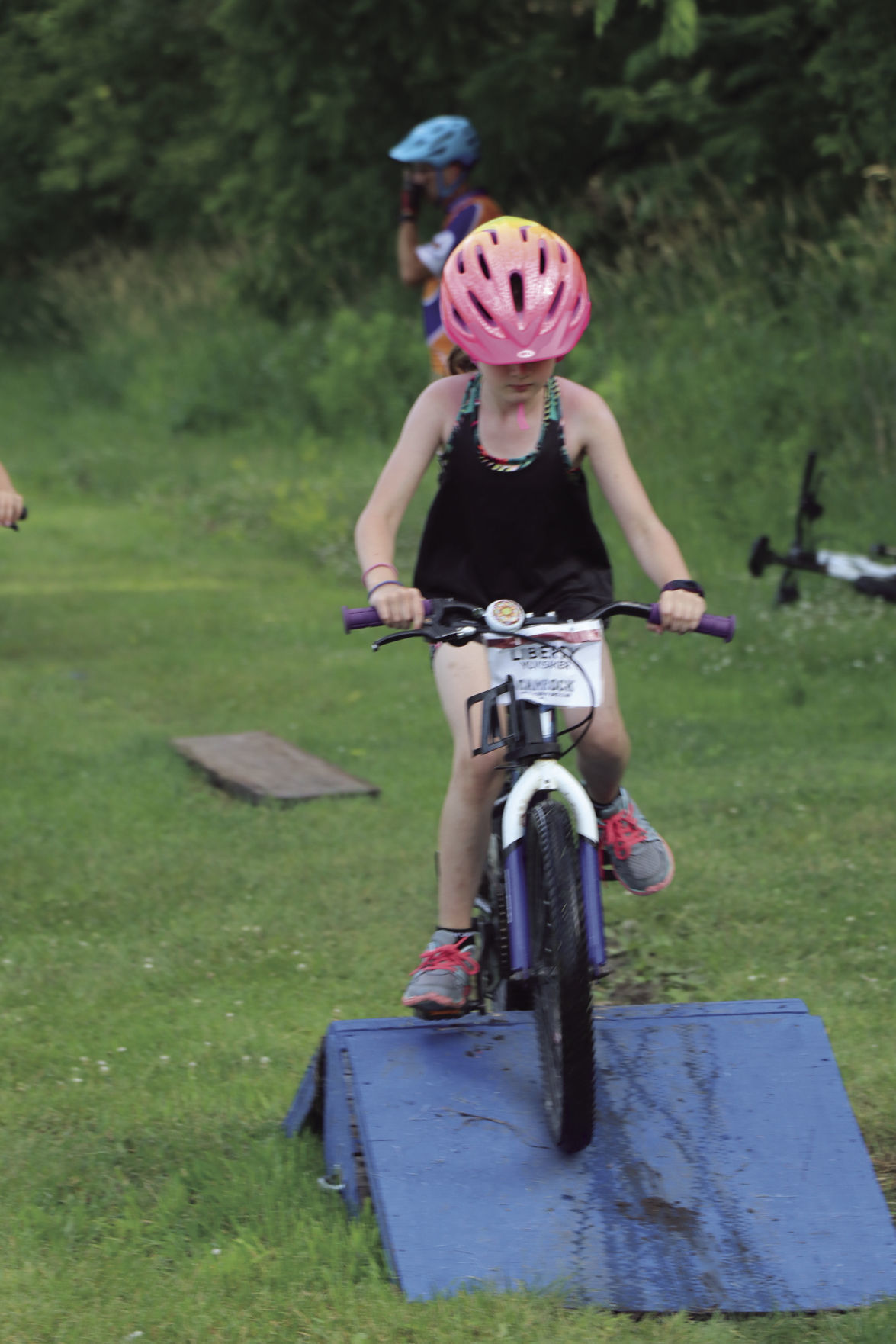 One young rider learns the best way to handle a berm while on her mountain bike in preparation for eventually competing on trails.

A group of young mountain bikers gather behind CamRock Cafe and Sport in Cambridge last week for the final meeting of this year’s CamRock Youth Mountain Bike Club.

The CamRock Youth Mountain Bike Club’s coaches are all volunteers, many of whom work for Trek, and a significant number of parents participate in the club each week of its duration.

One young rider learns the best way to handle a berm while on her mountain bike in preparation for eventually competing on trails.

Hardly a summer day goes by in a small town without seeing a child somewhere riding his or her bike.

But if you’re in Cambridge on a Wednesday night during the late spring or early summer, you see quite a few children on bikes.

For the past five years, thanks to a group of Cambridge-area parents, a substantial number of young biker riders have had the chance to learn more about a different sport: mountain biking. The CamRock Youth Mountain Biking Club meets every Wednesday evening behind CamRock Café and Sport from early May to mid-June.

According to CamRock Youth Mountain Bike Club coordinator Sherie Nelson, anyone comfortable on a bike is welcome.

“We have everyone from five and up,” she started. “If they can confidently ride a bike, we will allow them to ride. If they do not have any mountain bike skills, they need to be at little older.”

The club hosts children in kindergarten who are just learning the basics of trail etiquette to varsity riders who compete on a national level.

One of those riders is recent Cambridge graduate Ashley Pernsteiner, who will start at UW – Madison this fall in pursuit of a degree in mechanical engineering and is continuing her love of the sport via coaching.

“I’m kind of a new coach,” she said in interview. “I just came out of high school, so I’m not the one with the whole control plan. Every single night, we have a specific thing we practice. Last week we did climbing and descending hills, and the body position for that.”

Each week has a specific curriculum for each of the different groups meeting at CamRock Café and Sport.

Pernsteiner explained her group will work on skills for approximately 30 minutes each week before heading out onto the trails to hone new talents. The recent Blue Jay graduate said she has been biking since just before her freshman year of high school, when she discovered a summer school class on the sport.

Her middle-school curiosity turned into a sincere love of biking, and she will be working as an intern coach with the local high school riders in a few weeks when the varsity season starts.

Some groups will hit the trails to learn more about the rules and handling things there. Others will head to the “Mayor’s Playground,” a playful reference to coach, Capitol Off-road Pathfinders trail steward, and former Rockdale mayor Chuck Hutchens.

The playground looks something like a skate park for mountain bikes, and features berms, a wooden plank bridge, and some obstacle work for younger riders to learn more about how to handle such items on a trail.

Nelson said one selling point of the small park is parents can stand in one of the parking lots across the street and see their children at all times.

“Hopefully, at some point, we’ll have more berms and a pump track,” she said of the playground, explaining there are fundraisers in the works to build the space up more for younger riders.

The club coordinator said all the coaches are volunteers, many of whom are completing community service work hours for employer Trek in Waterloo. It seems the coaches are not too pushy on children becoming top-notch riders.

“That’s the beauty of it, it doesn’t matter – your skill level -at all. They’re just happy to see you out there, riding and having fun,” Nelson finished.

The CamRock club has existed for five years and was the brainchild of Kathy and Aaron Mock. Nelson said she was asked to take over shortly after Mocks started the club so Kathy could focus more on her duties with the Wisconsin High School Cycling League (WI League), the state chapter of the National Interscholastic Cycling Association (NICA).

There were 103 riders in this year’s CamRock club, and Nelson said the Wisconsin Interscholastic Cycling Association itself has doubled in size each year of its existence. Right now, most of the varsity-level competitors in the area are part of a composite team that features riders from Lake Mills, Cambridge, Fort Atkinson, and other area communities.

The sport has become so popular in the past few years, and that Lake Mills High School and Cambridge High School now offer varsity letters to competitors in the sport.

According to the NICA website, the organization was founded in 2009 to “develop interscholastic mountain biking programs for student-athletes across the United States.”

The site also indicates NICA has a vision of seeing every American youth having the opportunity to build a strong body, mind and character through cycling. The organization promotes skill development, teamwork, professionalism, and respect for the community and environment.

The Wisconsin Interscholastic Cycling Association (WIN) was founded in 2013, and laid the groundwork for the sport by hosting an inaugural state championship race; it later gained affiliation with NICA to become WI League. It serves middle and high school students and is committed to a positive cycling experience.

According to the CamRock Youth Mountain Bike Club, the group strives to provide children who have a desire to mountain bike the coaching and sense of community that will help achieve both competitive and non-competitive goals in a safe, fun way.

Those interested in learning more about next year’s club meetings can contact Sherie Nelson at 608-423-2111, or checking the club web page at http://camrocksport.com/camrock-climbers-youth-mtb-club/.