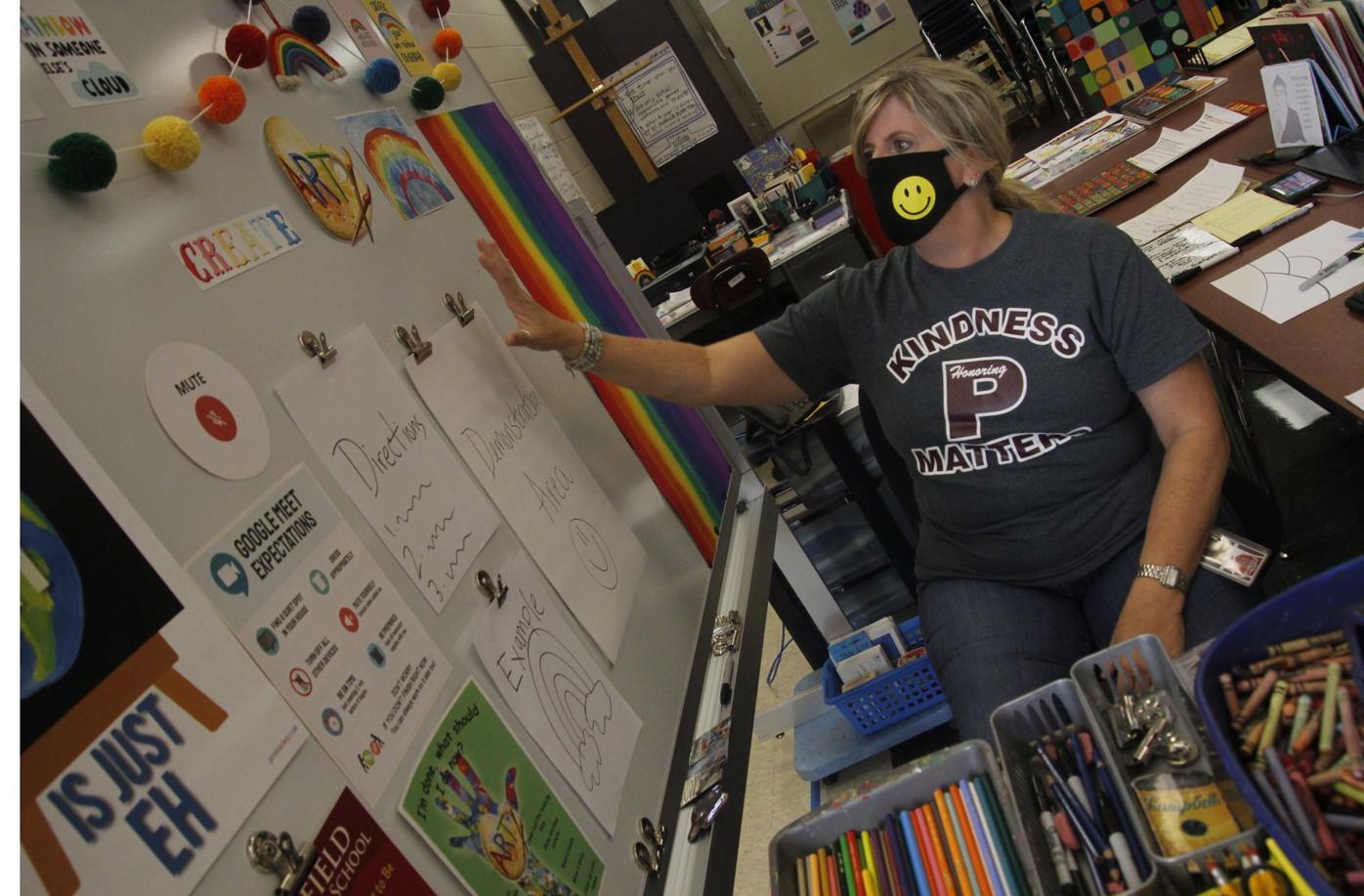 Deerfield Elementary School art teacher Tammi Henke preps for a virtual start to the year, due to COVID-19. 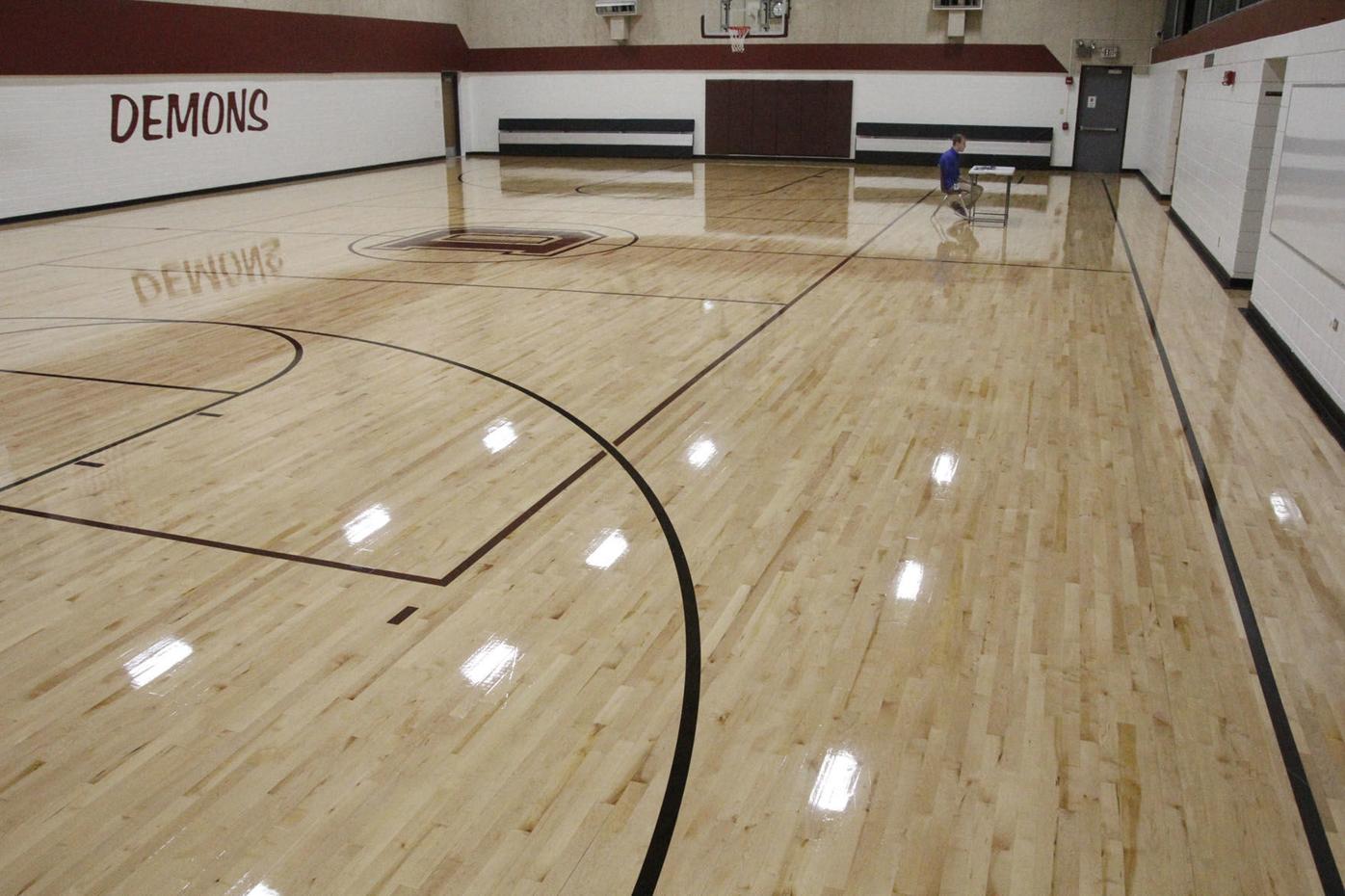 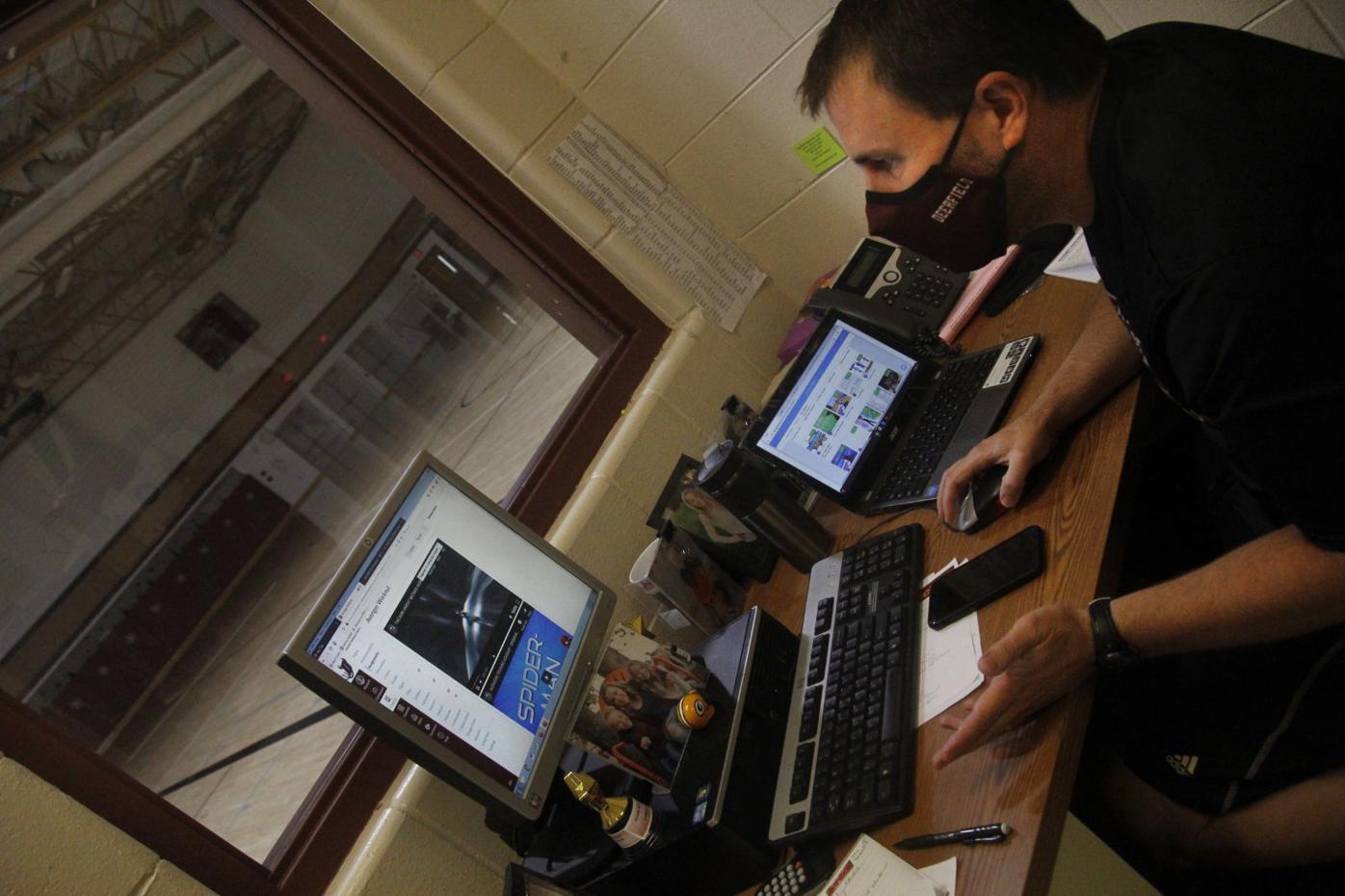 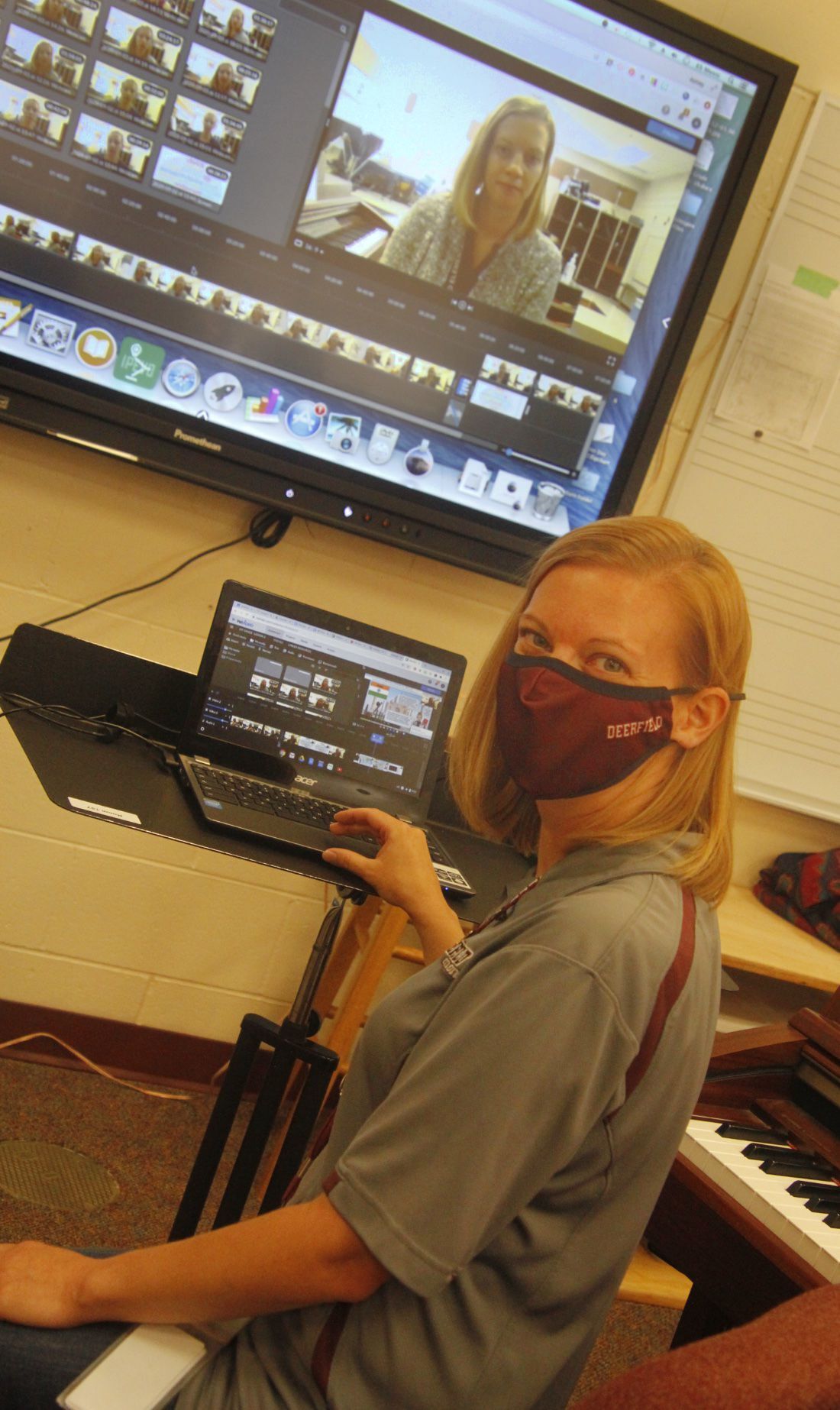 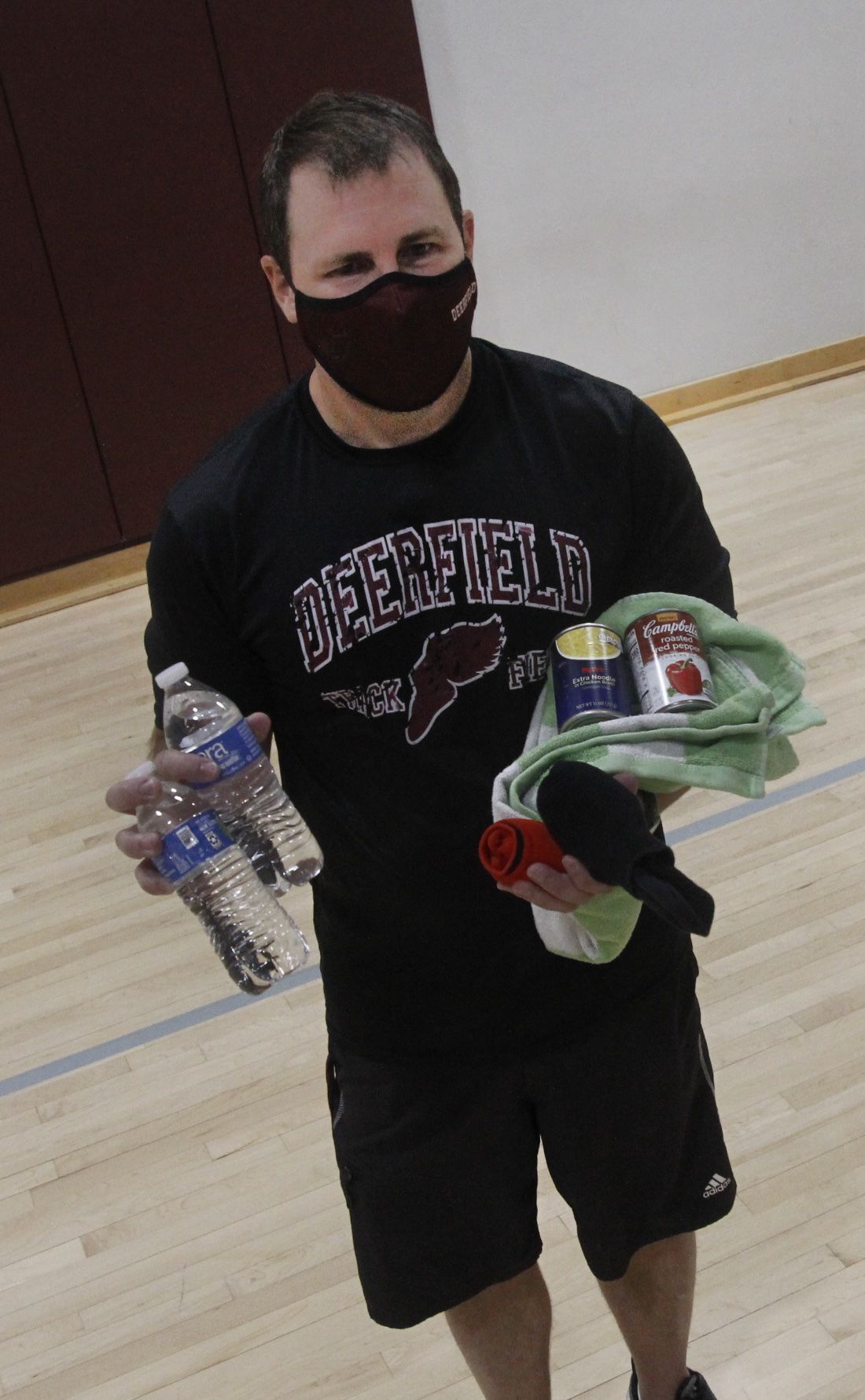 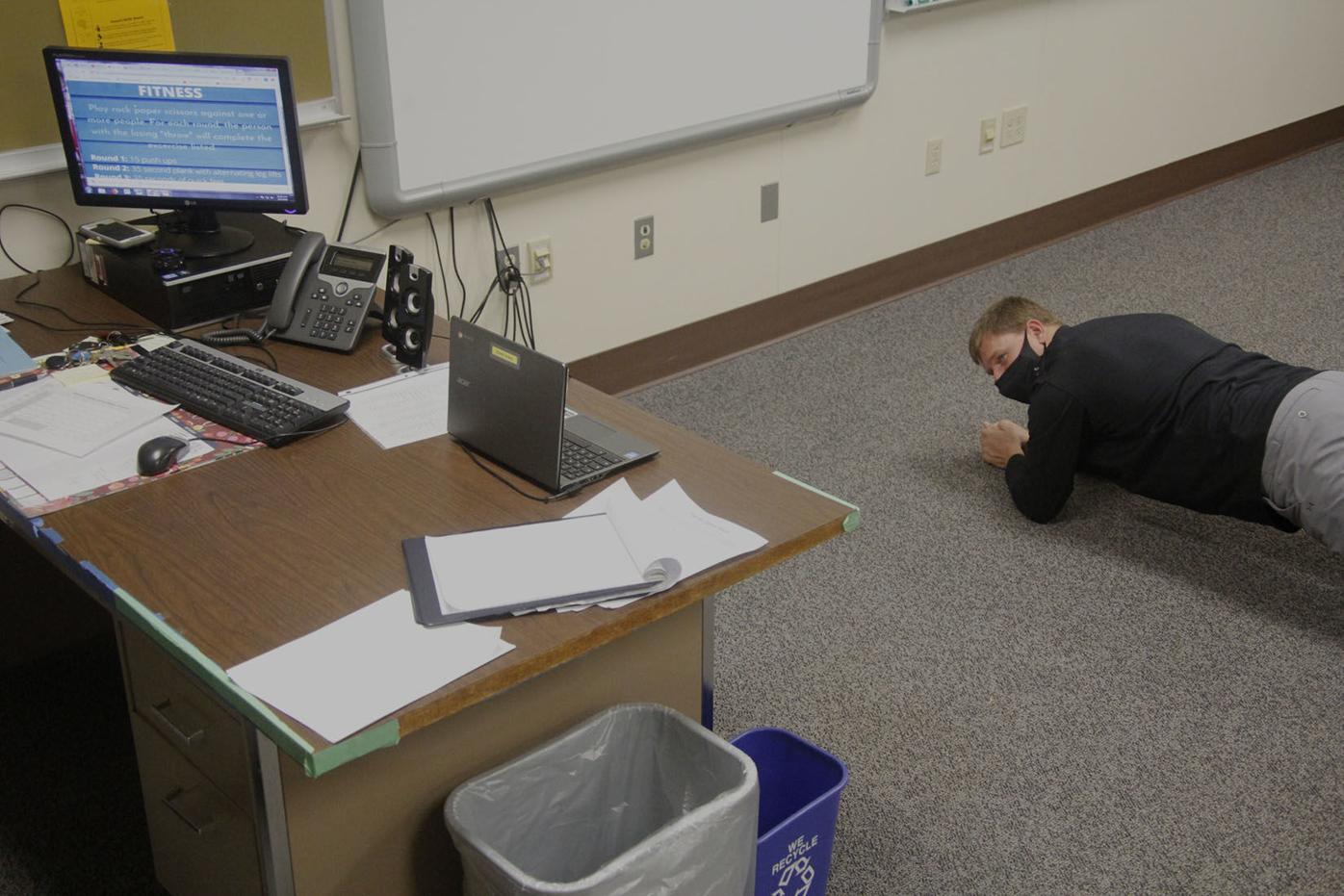 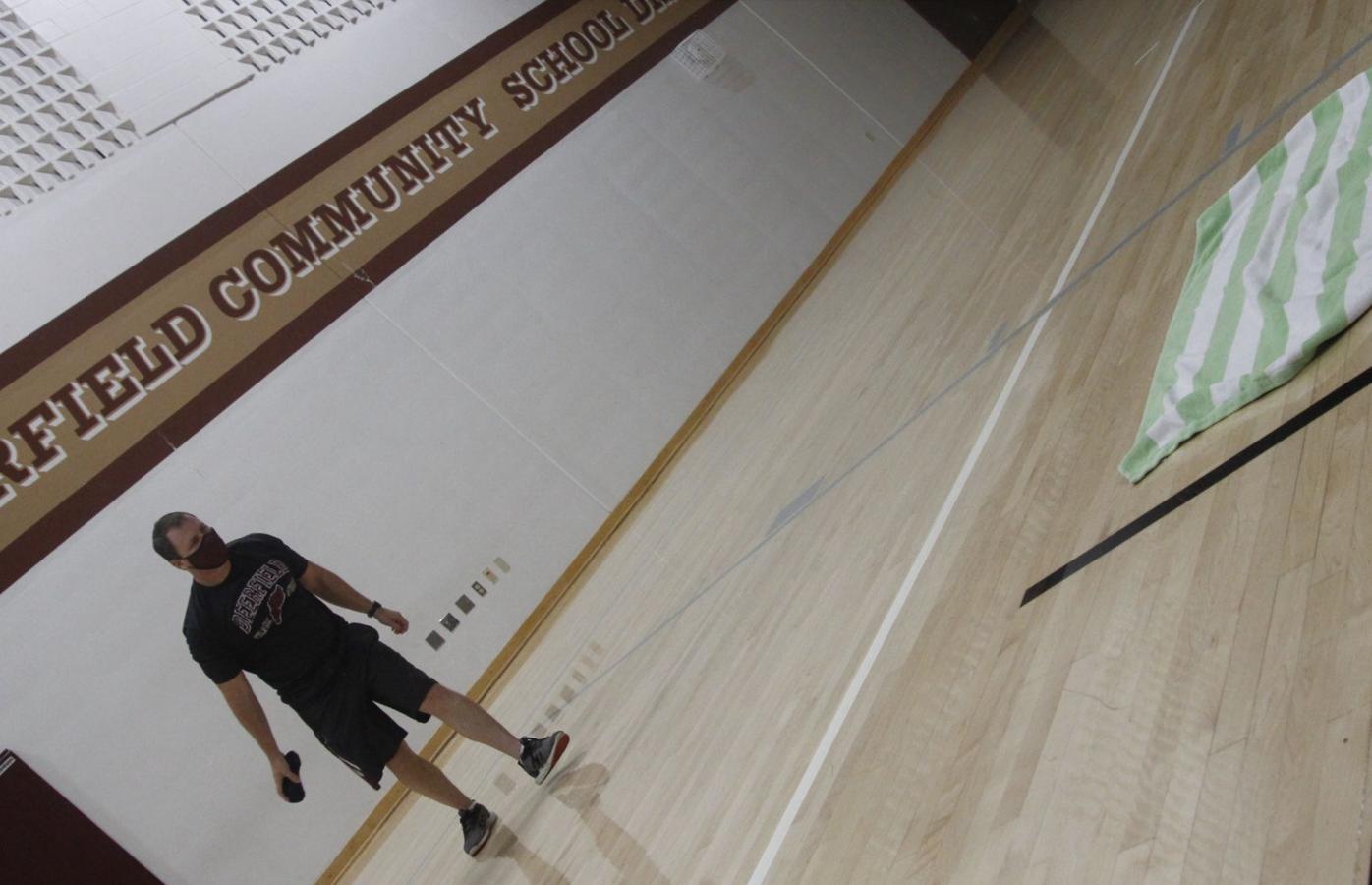 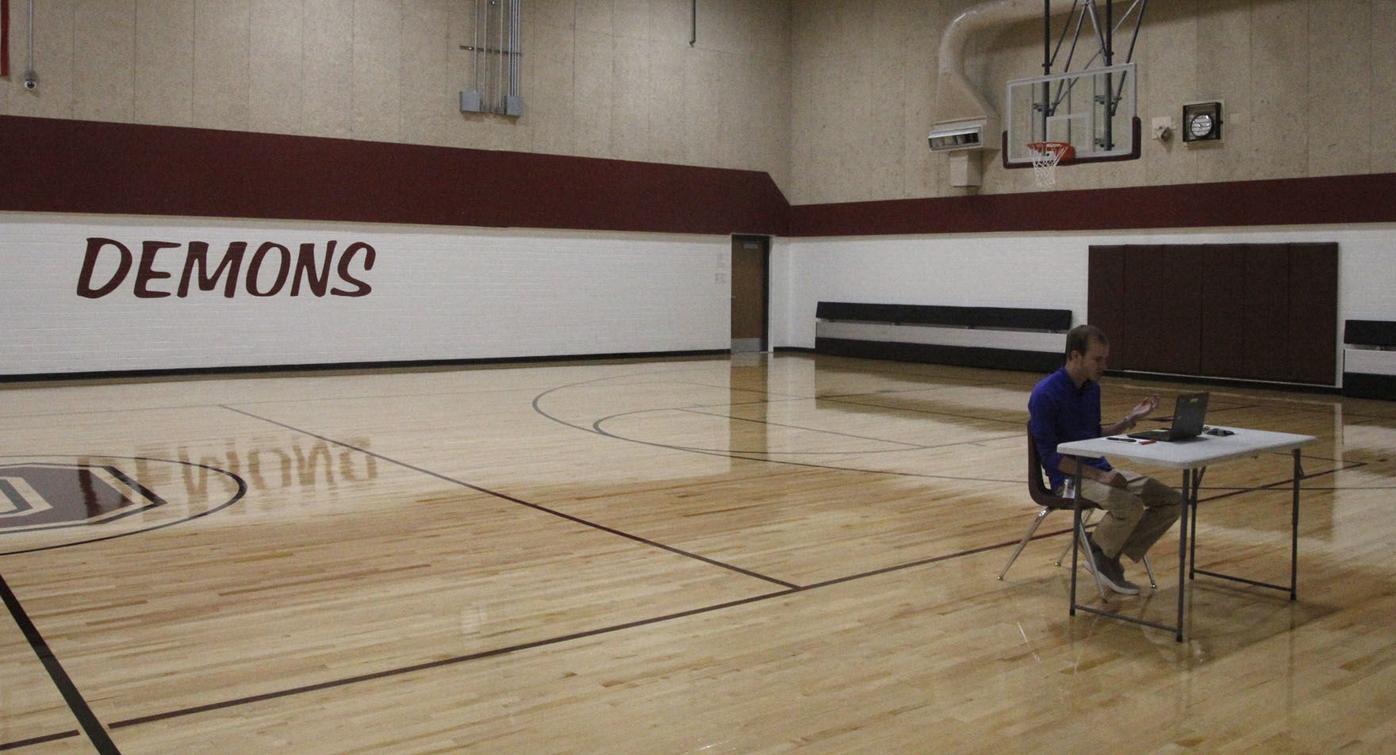 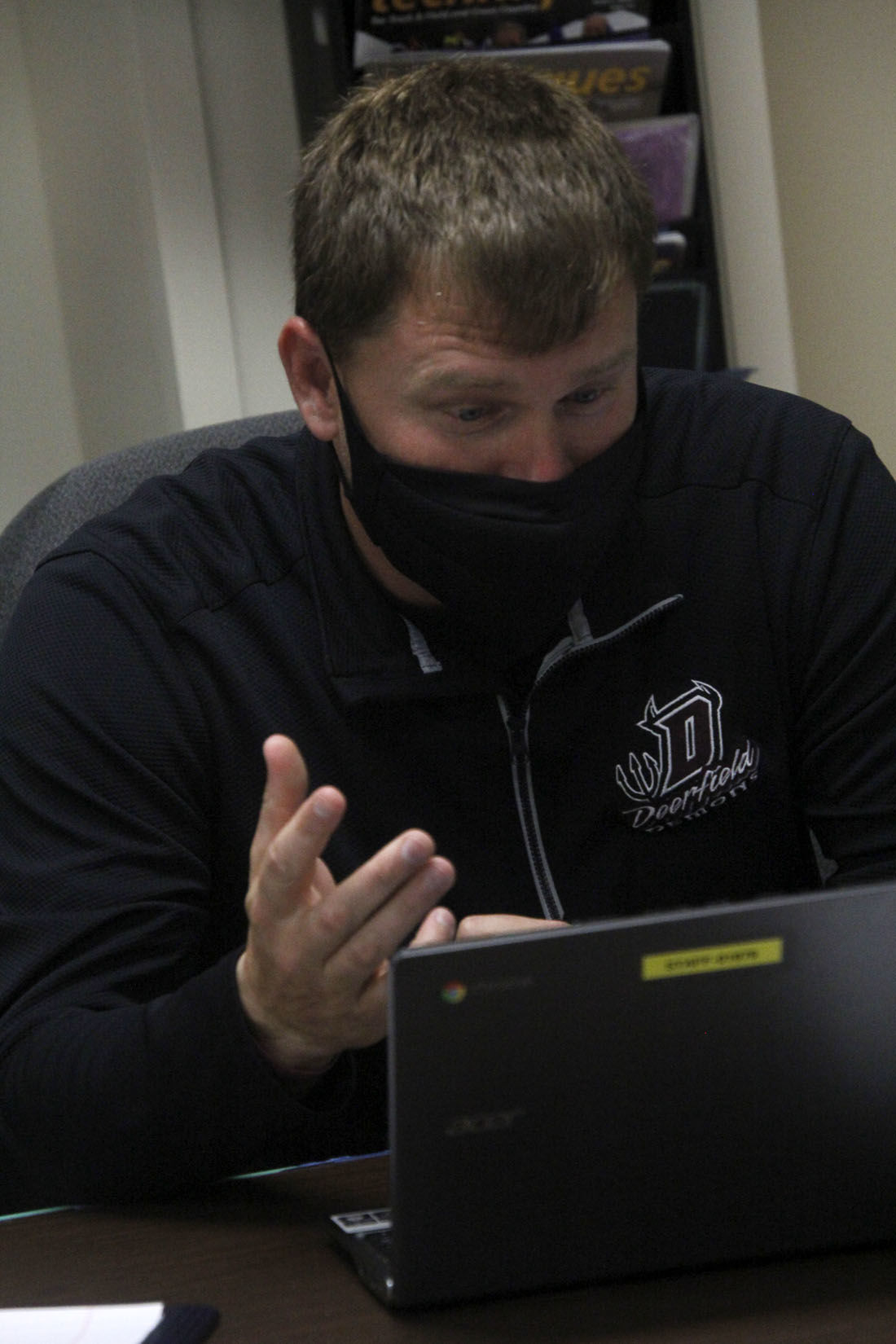 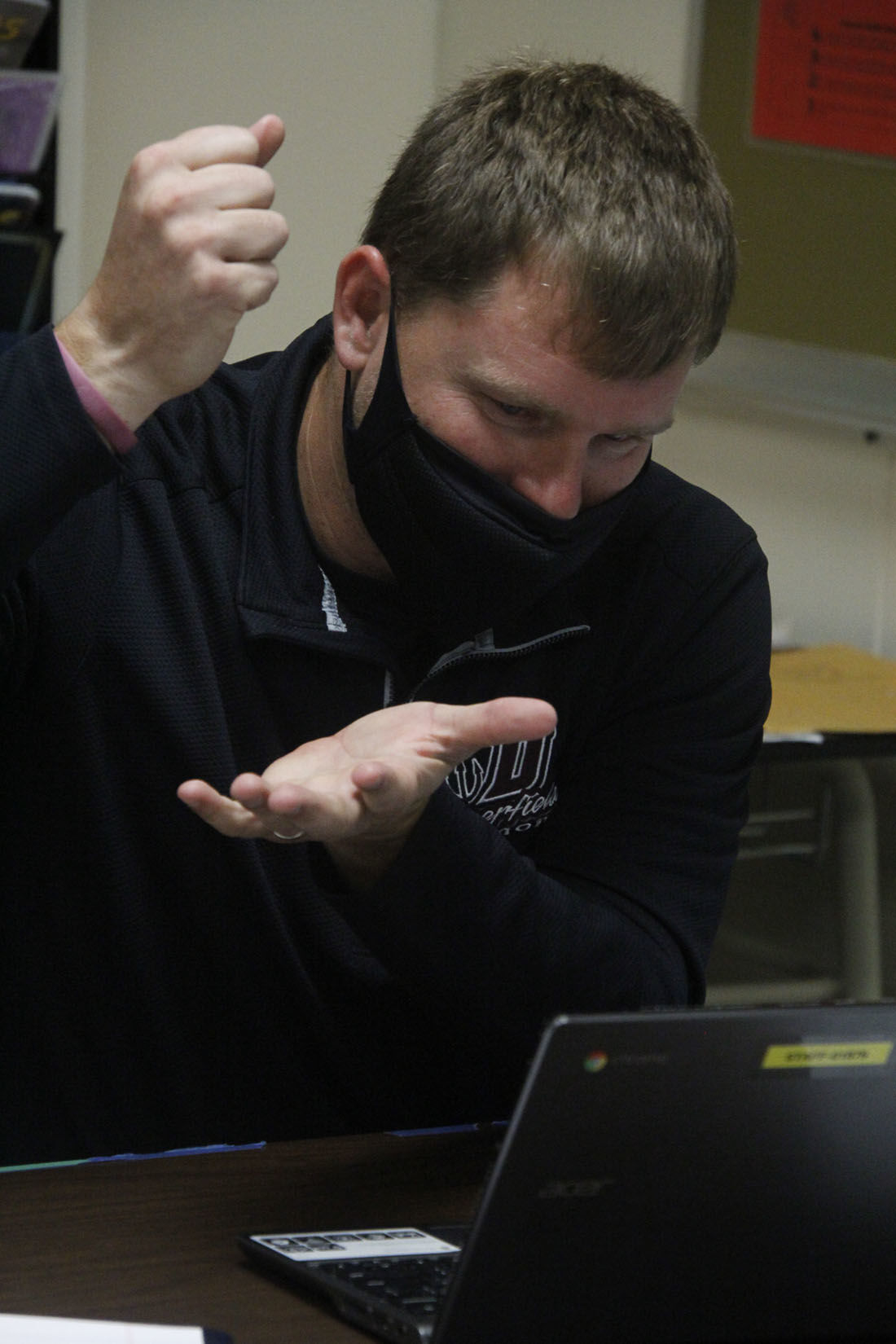 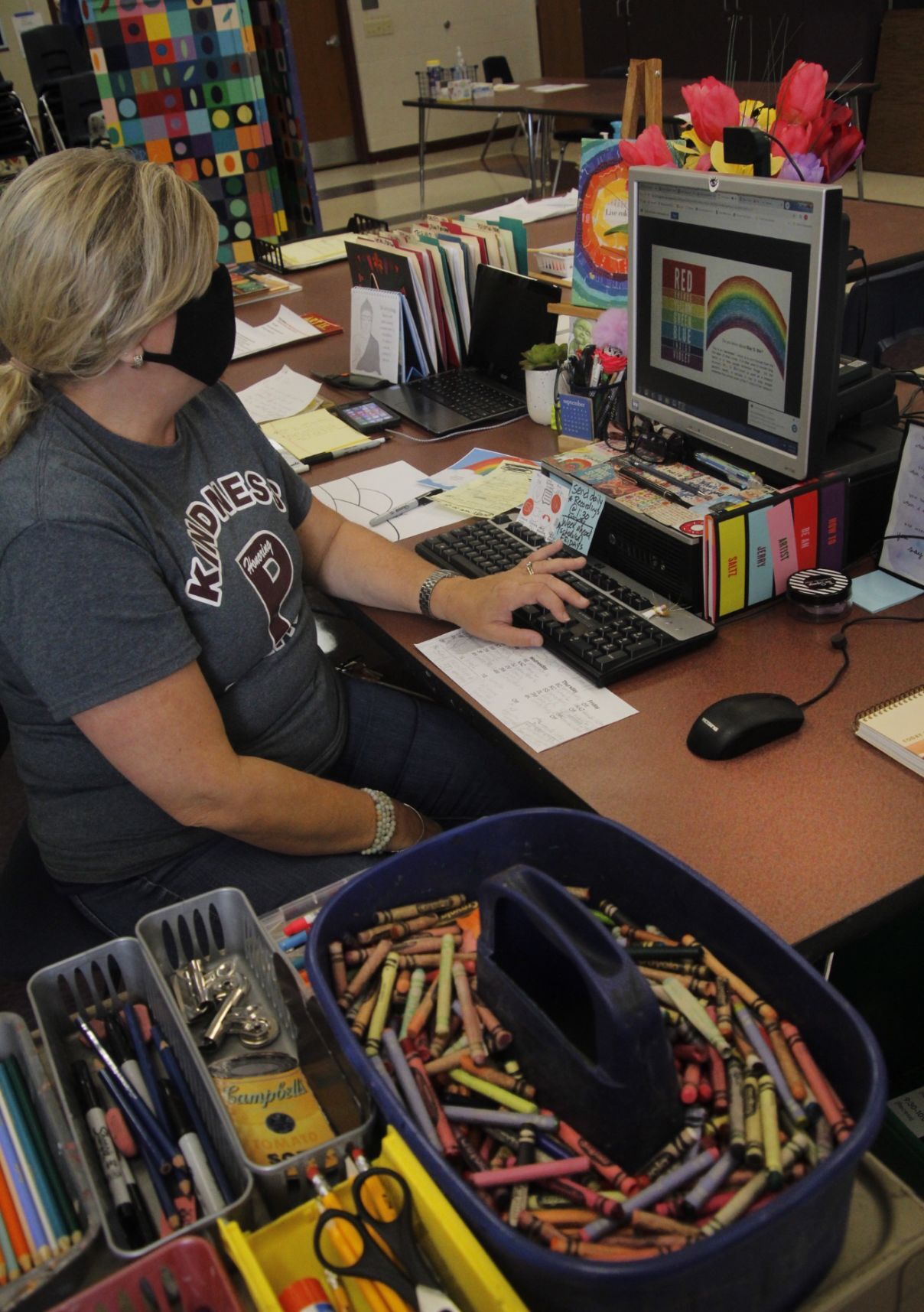 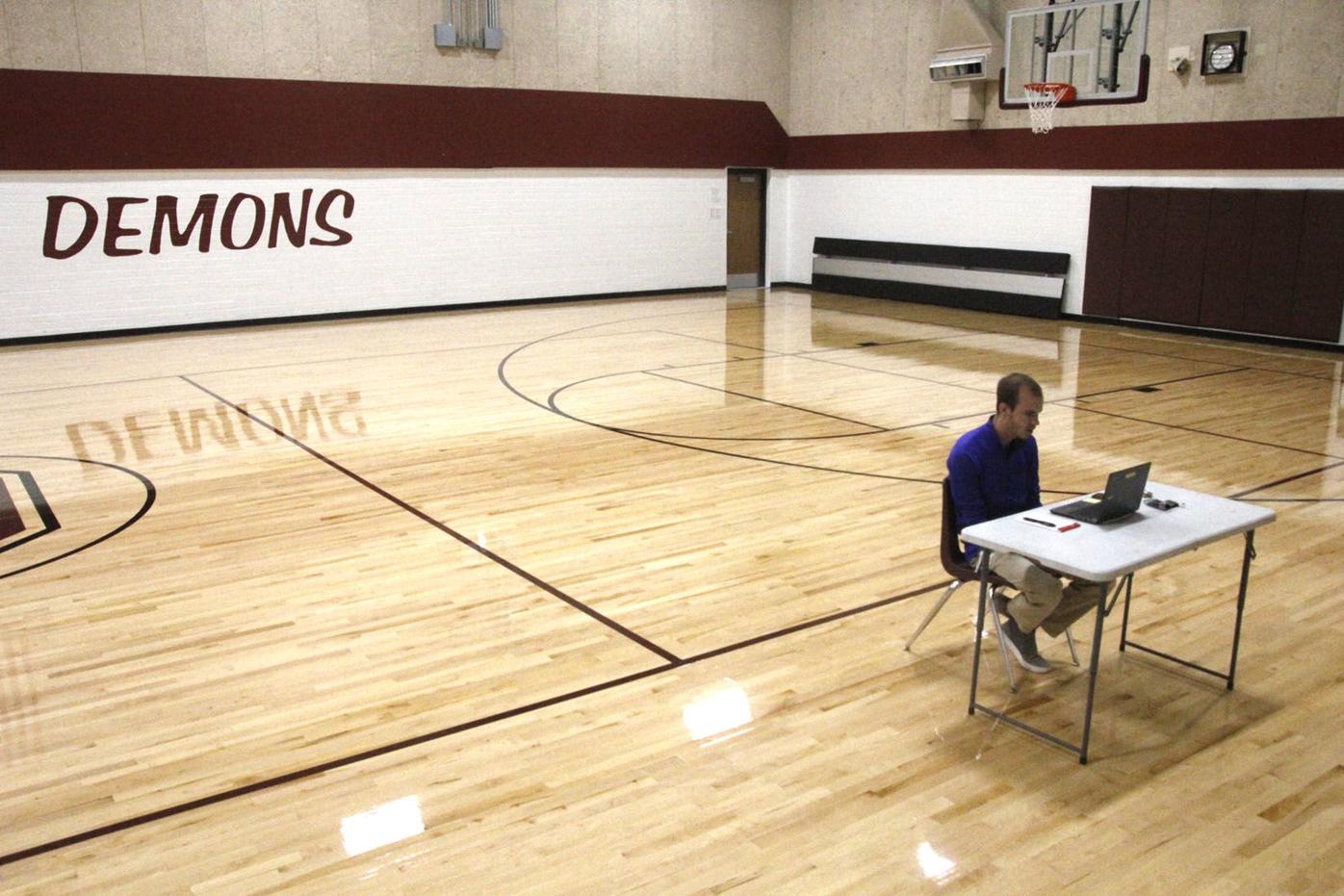 Deerfield Elementary School art teacher Tammi Henke preps for a virtual start to the year, due to COVID-19.

Bret Wepking has an equipment closet at Deerfield Elementary School crammed with scooters, jump ropes, soccer nets and every kind of indoor and outdoor play ball.

As he prepped for this week’s start of virtual school, amid the coronavirus pandemic, the DES physical education teacher left all that packed away.

Instead, he was planning for balled-up sock throwing games alternately involving plastic grocery sack and beach towel targets. He was brushing up on his water bottle flipping and thinking about soup-can scavenger hunts and soup can weight-lifting. And he was looking for pre-recorded kids’ yoga videos and exercise routines requiring nothing but a child’s own body strength, to supplement his live-streamed lessons.

As classroom teachers have also experienced, “specials” teachers of subjects like art, music and physical education have upended their curriculums for virtual learning, that began on Tuesday, Sept. 8 in Deerfield.

At least through November, all Deerfield students will have a mix of live-streamed classes and pre-recorded lessons, interspersed with other material like educational videos. The pre-recorded material is important for families whose home schedules don’t mesh well with daytime virtual school hours.

In thinking about what would work online, Deerfield high school physical education teacher Hunter Jensen said tried not to forget the top objective of in-person classes.

“What I really tried to do was find ways kids could be active,” said Jensen. His his offerings will include building obstacle courses with “anything around their house,” and Minute-To-Win-It challenges that can be done in small spaces.

Run around the house three times? Maybe, maybe not. There’s no guarantee every student can run around outside their house safely, said Jensen and middle school physical education teacher Jason Weirzba.

Alternatively, students might jog in place, said Wierzba, who began his first middle school classes on Tuesday with a rock-paper-scissors challenge, in which students were placed in teams of two, and the loser had to do sit-ups, a plank or some other fitness challenge.

Last week, in her room at DES where she teaches general music and fifth-grade band, Ashley Meyer was preparing for a fall without group singing.

While tempting, internet speed delays and the chaos of unmuting an entire class of elementary schoolers makes group singing impossible, she said.

There will, however, be singing in portions of her lessons that are-pre-recorded, and watched individually at home, Meyer said, sharing one video in which she directs children to echo her in a good-morning song. Children who have previously gone to school at DES will recognize the song.

Meyer said she is focusing more on music exploration than she might at the start of a typical year, such as having children listening to a variety of music from around the world.

And some students will have music-making tools to play with on their new Seesaw virtual learning platform, including ways to record their voices and to make their own music videos, that can be shared with Meyer or with the entire class.

“All of those things will allow them to express themselves,” Meyer said.

Meyer said she expects this fall “to be a learning curve for all of us, as we figure out what kind of activities work well and what is not conducive to a virtual learning environment. I think we all have to be patient with each other.”

Deerfield Elementary School art teacher Tammi Henke, meanwhile, was practicing last week demonstrating drawing on a sketch pad tacked up vertically behind her, rather than at a table with a class gathered around her in-person. The latter is an everyday scene in her classroom in normal times, that Henke said builds community.

For virtual school, the board behind her desk will be picked up by the camera on her desktop computer. Set within arm’s reach at her desk were boxes of crayons and markers, and other supplies that Henke said she normally would keep in various corners of the room. But in virtual school, she can’t just walk off screen to grab a supply, Henke said.

“You have to think about how to change things,” Henke said.

Henke said she plans to start out exploring colors and rainbows using basic markers, crayons and pencils that students either received in supply kits ordered last spring through the PTO, or that were on school supply lists families were to purchase.

Henke said it is “absolutely” possible to make art with limited supplies.

Grand expectations will be limited, too. She expects to start the year slowly.

“The first day of class is going to just be a time to talk with each other,” Henke said. “’This is what it’s going to look like for a while. It will be okay, and we can still have fun and still be able to be together.’”

Mark Pendl, who teaches middle and high school art in Deerfield, says replicating in-person connections with students is going to be challenging.

Normally, he might start a class by saying “we are going to work on our drawing or watercolor painting and I am going to walk around the classroom, giving one-on-one instruction,” he said.

This fall, he said his goal “ is to make up for that as much as possible,” but he said there’s no knowing how successful that will ultimately be.

Pendl’s art students have picked up a bag filled with a textbook, pencils, markers “and even some paper, in the hope that we could just get them started,” Pendl said.

Future supply pick-ups might happen in a few weeks, he said. A future pick-up might include modeling clay, the best replication of a normal experience with a pottery wheel.

“If we cannot have a pottery wheel then what can we have?” he said.

In a normal year, “we would start with drawing,” and this fall is no exception, Pendl said. “Drawing is basically the beginning of any experience,” he said.

DHS has a dark room, and normally art students learn how to develop film, Pendl said. This fall, the focus will be on digital photography and digital photo editing, he said.

Pendl is prepared for students’ feelings about the pandemic to be reflected in their art.

“Art is a form of communication,” and emotions are likely to come out in the same way that the emotional state of musicians and writers influence their work, Pendl said.

A postcard design project he’s planning for this fall has the potential to bring out some of that, he said.

Students will be asked to “paint something that is relevant to them, something they are thinking about.” He expects COVID to be a central theme.

“’I drew that because we didn’t get to go on vacation, or we didn’t go to the waterpark so I did a painting about how ticked off I was about that,’” he said.

“Being at school is part of students’ identity, and they are missing out on that right now,” Pendl continued, which he said “affects them in all different ways.”

Recognizing those challenges, he said he might let some days purposely be low key, “let’s just be together and try to make some art.”

Jensen said his pre-recorded material will include mindfulness activities and breathing exercises, that he hopes will help students get though an overwhelming time. And in general, “just being active is going to be so healthy for their minds,” Jensen said.

Jensen’s high school strength and conditioning class will keep an exercise log with activities of their choice, from walking their dog, to biking on a trail or just walking around the block.

Deerfield specials teachers admit the start of virtual school has challenged them. The instructional pivot has made him feel “like a first-year teacher again,” Wierzba said.

But they said they are determined to model positivity.

“I am going to make it the best I can make it,” Jensen said. “If I show kids I am positive about it, I think it will help them.”