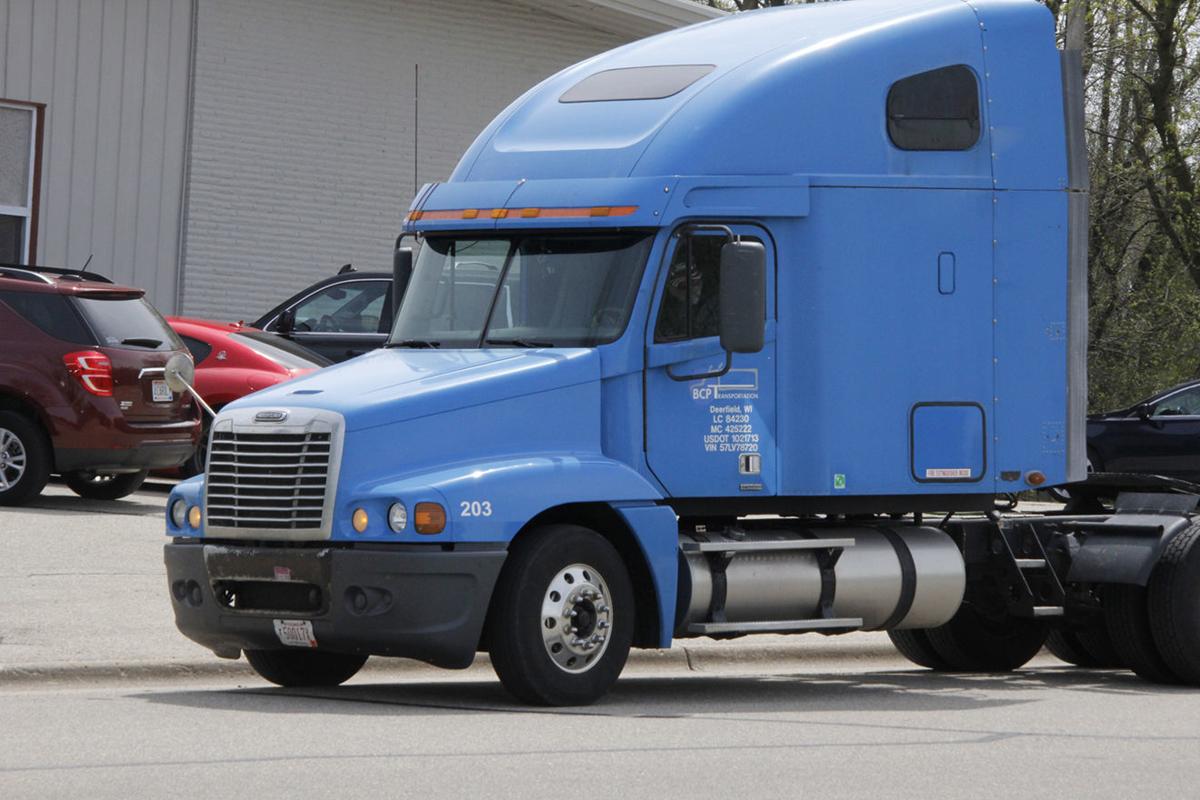 A semi-truck leaves BCP Transportation in Deerfield on Monday, May 5. 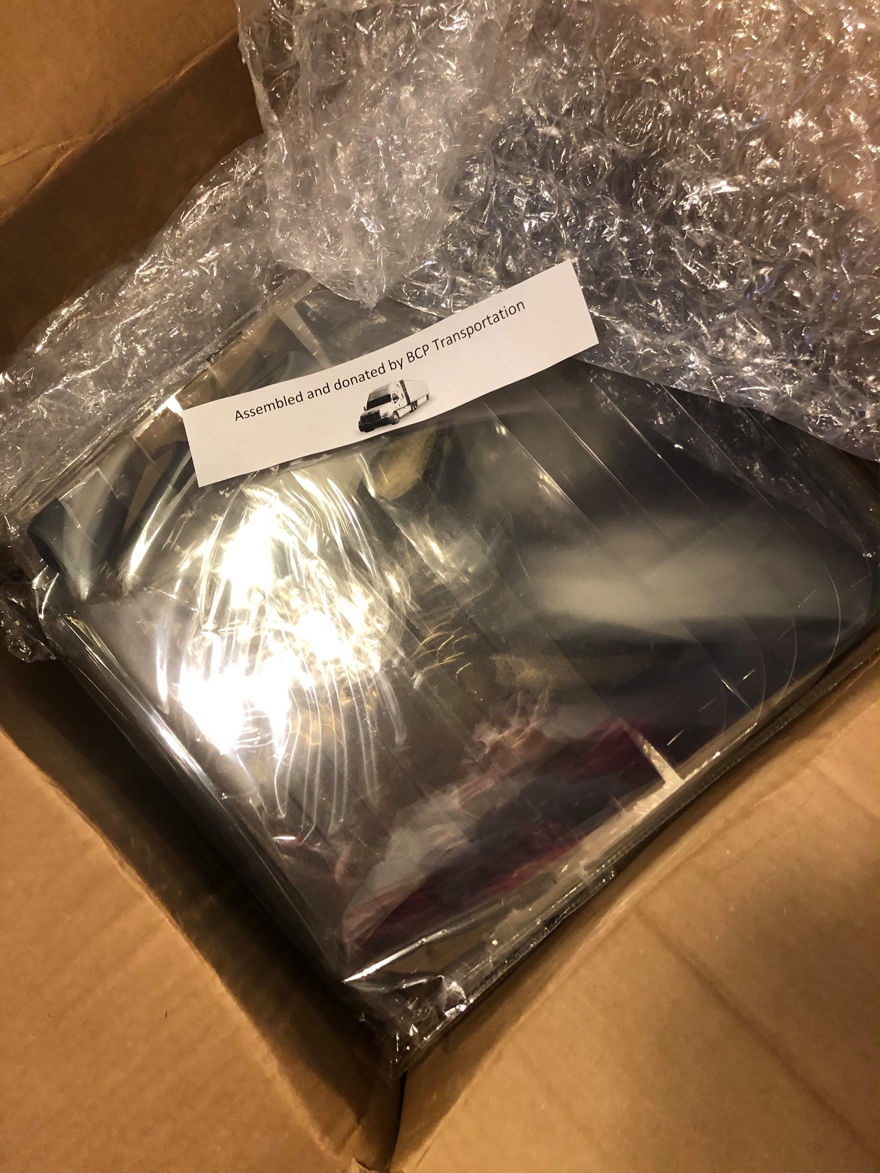 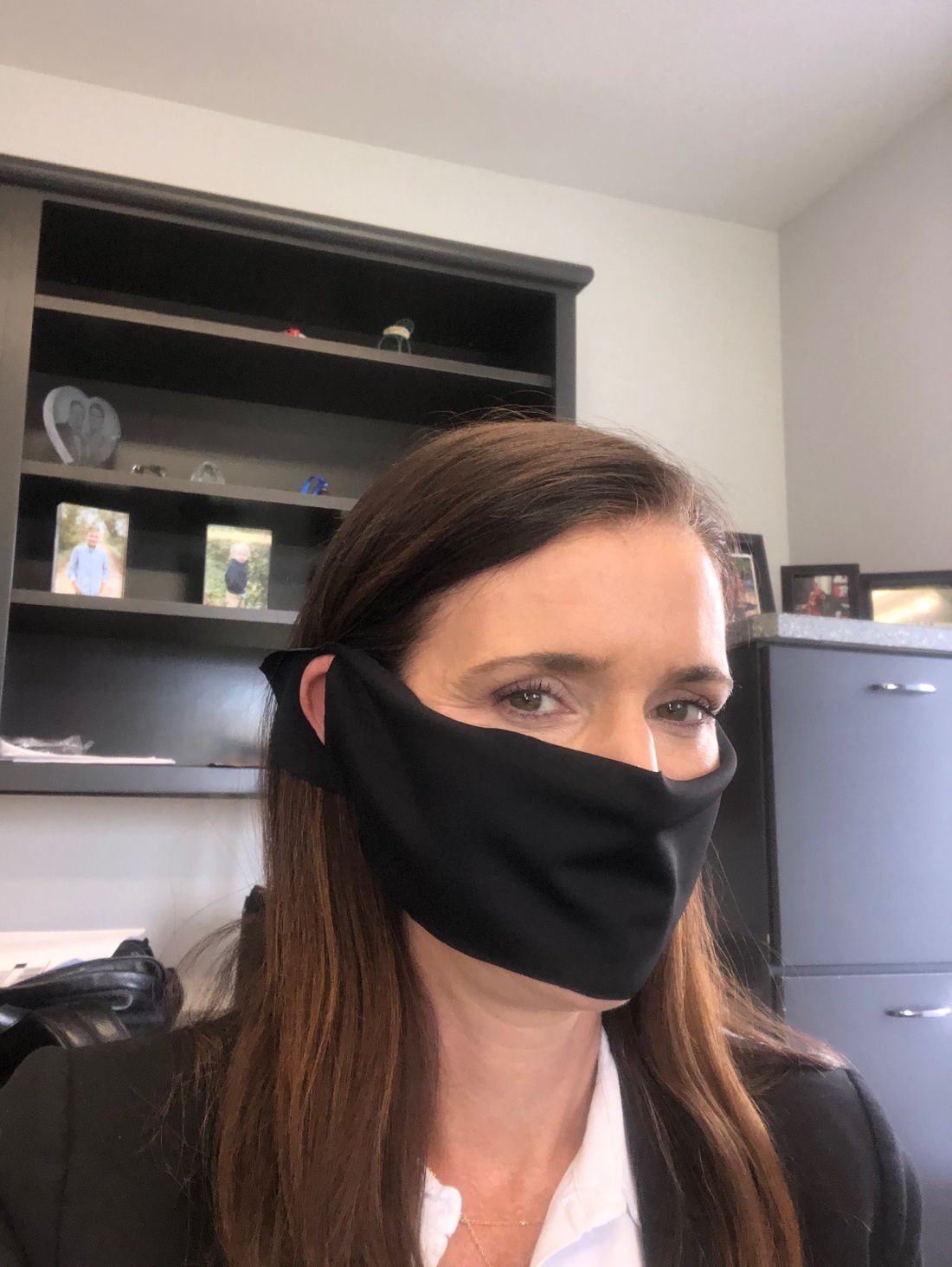 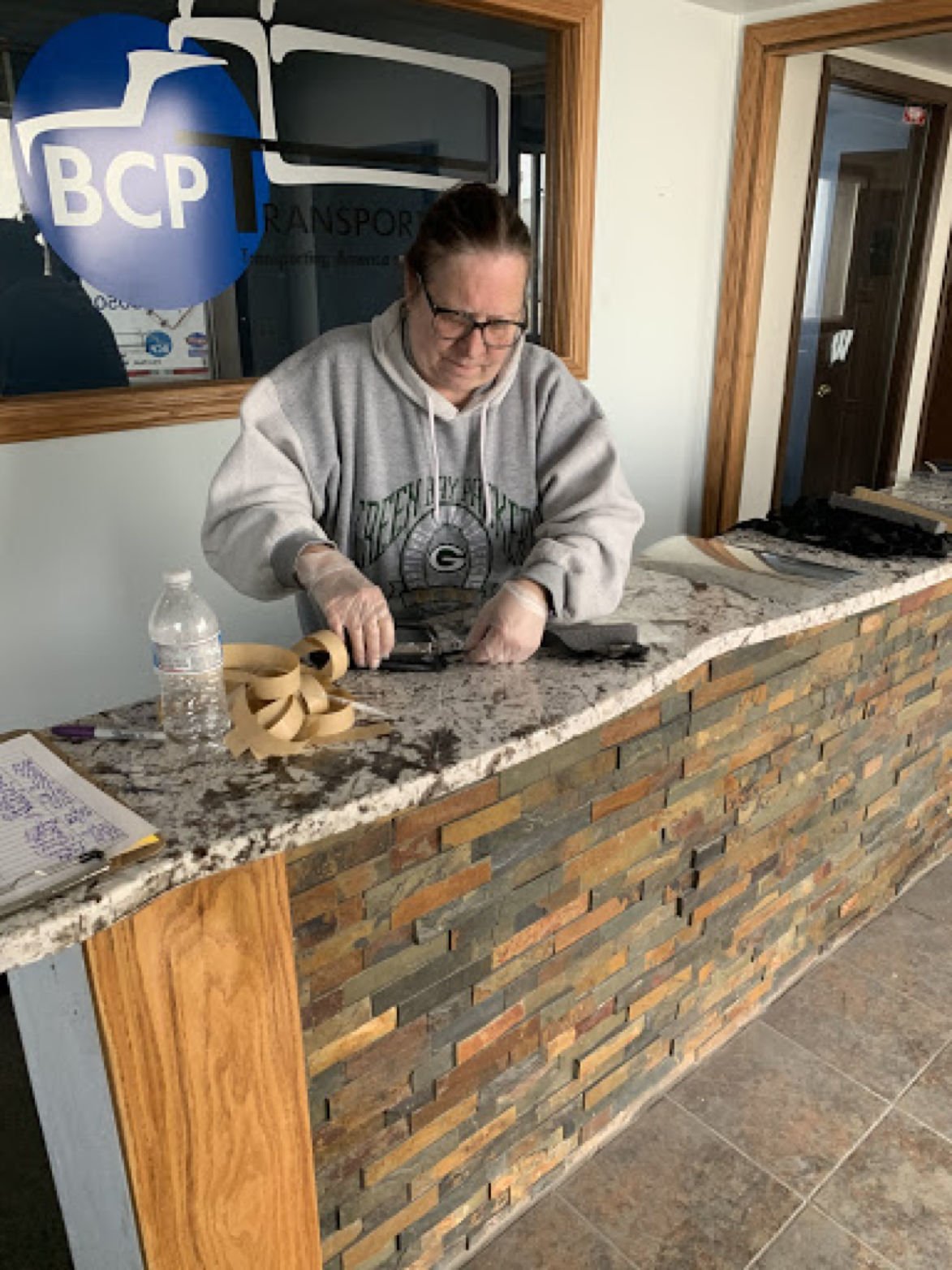 A semi-truck leaves BCP Transportation in Deerfield on Monday, May 5.

Deerfield has two longtime trucking companies whose staff and contracted drivers have kept on crisscrossing the United States during the COVID-19 pandemic.

In recent interviews, drivers said it’s been a weird time.

They spoke of eerily empty interstate highways and shuttered restaurants, that has forced them to eat, more than ever, alone their rigs.

They spoke of worries about getting their families sick and deep appreciation for the support they’ve had from the companies they drive for. And they reflected on how it feels to be called a ‘hero.’

BCP Transportation in Deerfield’s Industrial Park has 106 drivers, that are a mix of staff and contracted owner-operators, said President Nancy Spellsberg. The company, founded in Deerfield in 2011, also has office and warehouse staff in Deerfield.

Tom Gullickson, Inc., whose headquarters are on State Highway 73 just south of the Village of Deerfield, has 40 full and part-time drivers said Mike Gullickson, a third-generation owner whose family founded the business in Deerfield in 1948.

Tom Gullickson, Inc., also has about a half-dozen office staff in Deerfield. It hauls food products in refrigerated, freezer and tanker trucks, including milk, frozen meat, cheese, sausage, eggs and cream. Some of the products it hauls are store-ready, bound for grocers, and others are raw materials headed to production facilities.

Drivers have taken their duty during COVID-19 “seriously,” Mike Gullickson said, recognizing the importance of getting food across a shut-down country.

Gullickson said there is still a demand for food products and all of its drivers and office staff who are available to work, have done so.

“Nobody has said they don’t want to work,” he said. “These guys are basically risking their health to supply food to the customers we work for, and the people that buy it. They are front-line workers, and they take a lot of pride in that,” Gullickson said.

Spellsberg similarly said all of BCP's drivers that have been available to work, have been. BCP has been able to find loads for its drivers, though more sporadically than normal, she said.

“Our Top 20 customers are all open right now,” which has helped, Spellsberg said.

At BCP’s warehouse and office in Deerfield, where business has also been sporadic, employees have been assembling COVID-19 face shields in their down time. Those are being donated to hospitals and nursing homes nationwide.

BCP purchased the materials for the face shields in cooperation with UW Hospital, Spellsberg said. So far, BCP employees have assembled more than 1,000 face shields, and have enough materials to make 4,000, she said.

“We have good employees, we want to avoid layoffs. To the extent that we don’t have enough work…they are free to assembly face shields,” Spellsberg said.

Steve Hipwood has been driving for Tom Gullickson, Inc. for 25 years. He said he’s appreciated the company’s efforts to keep drivers employed as deliveries to typical customers like restaurants and schools have nose-dived.

Hipwood, who spoke from California where he was delivering a load of frozen meat, said the number of individual “drops” he’s making as he crosses the country has fallen significantly.

And life on the road in general has been dramatically altered, he said.

Hipwood said truck stops are open “because they are vital to the industry,” but sit-down restaurants are hard to find. Truck drivers have been left with carryout and not always satisfying fast-food options.

At drop-off and pick-up docks, Hipwood said instead of typical personal interaction, “there’s a lot of head nodding, acknowledging that you’re there, but other than that not a lot of talking.”

Only occasionally, he said, “you run into somebody that will still talk.”

“There’s a lot less traffic on the road,” he continued. “I’ve gone through a couple of places where I swear I was driving through a ghost town.”

Driving near Kansas City, he said he didn’t see one other vehicle on his side of the highway for more than 15 minutes. On other similarly lonely stretches, he said it’s felt like an apocalypse movie.

“It kind of made you wonder, ‘did somebody drop an atomic bomb up here?’“ he said.

Paul Schumacher has driven for Tom Gullickson, Inc., for 20 years, hauling food products like milk and liquid eggs mostly in the Midwest and southern states.

Speaking April 5 from Michigan, where he was dropping off a load of cream, Schumacher agreed that he’s been “eating a lot in the truck,” and has been bringing more of his own food with him, with fewer available restaurants.

He’s said he’s appreciative of his job, with so many other people laid off nationwide.

The Gullicksons “have been keeping us pretty busy,” Schumacher said. “I think they are really doing what they can to keep everybody working under the circumstances.”

On the road, Schumacher said he normally tries to avoid rush hour through big cities.

“You don’t have to do that right now,” Schumacher said. “You can zip right through Chicago.”

But some of what he sees along the way has felt strange.

“You drive by hotels, and they’re pretty empty right now,” he added.

Joshua Wilburn has worked in the trucking industry for more than 30 years and has driven for BCP Transportation for about five years.

Normally Wilburn, who lives in Missouri, will bring a load up to Deerfield and then head out west with a new load to states like California.

At docks recently “the shippers and receivers don’t want you in their facilities,” so waits for loads feel very different, Wilburn said, speaking from a truckstop in Reno, Nevada.

The sudden nationwide decrease in availability of freight loads, and lower prices being paid for loads, has made an impact, Wilburn said.

“Everyone is fighting over the same loads,” he said. “I have driven 500 miles over to Tennessee to get a load. That’s part of freight tightening up, and that’s all over the country.”

Wilburn said having to carry food back to your truck to eat mostly works logistically; most trucks are set up with small refrigerators, microwaves and other ways of heating up food.

But the isolation has been hard, he said.

“We really need to get out of these trucks sometimes,” he said. “I’ve been staring at these same walls and windows for a month.”

Nicole Reeves lives in Texas and has driven for BCP for nearly five years, mostly to western states like California. Her husband travels with her.

She said with restaurants closed, they’ve made due with a toaster oven, microwave and Instapot in their truck.

“Normally we don’t go out to eat much, but we have not sat down in a restaurant since this thing started,” she said.

At truck stops across the country, she said she’s been taken aback by having to stand on an X on the floor to wait for her food, and not being able to pour her own coffee.

She said truck stops have, however, kept showers and restrooms available.

“I haven’t had a problem getting a shower,” she said.

Driving through Los Angeles recently, she noticed that in addition to a lack of traffic congestion, the air quality was noticeably better.

Mike Csaplik lives in Ohio when he’s not on the road and has driven for BCP for about two years. He said he “can’t recall the last time I was in a traffic jam,” and recently drove through both Philadelphia and Jefferson, Georgia “without even slowing down.”

That lack of traffic, “is very surreal,” he said.

The father of two young daughters, Csaplik agrees that, for truck drivers nationwide, having to eat all their meals alone in recent months “has really affected us more than we think.”

Mike Gullickson said his company’s office staff have put together bags for drivers to take on the road with them, with hand sanitizer, snacks and latex gloves.

BCP, too, has been sending drivers back on the road with bags of snacks, homemade masks and hand sanitizer.

And some of what drivers are now hauling has brought them pause.

Through a contract with a company in Portage, that typically assembles truck bed liners and is now assembling portable hospital beds, BCP drivers have been hauling hospital bed parts, and mattresses, and some finished beds.

“It’s been kind of a neat thing,” Spellsberg said. She said she has heard from drivers that it has helped give them a “sense of purpose,” during the pandemic.

“There is a greater good…and there is gratification in that,” she said.

Reeves has hauled hospital trauma beds to Portage for BCP, with the understanding that they would ultimately be bound for the East Coast.

“I feel like I’m contributing to the betterment of society by hauling something like that,” she said. “I don’t like being praised for what I do, I’m not used to that…but feel good about it.”

Spellsberg said BCP is paying their drivers a little more per mile during the pandemic, calling that “hero pay.”

“I wish we could do more, but we did what we felt we could financially manage,” she said.

The freight market “is not as bad as it was two or three weeks ago, but it’s still pretty bad,” Spellsberg said. “It might be the fourth quarter of this year before things are back to normal…if anything has a normal after this.”

“We’re trying to support them the best way we can,” Spellsberg said, adding that “if I had a ton of respect for truck drivers before, I have a ton more now. I’m blown away by their professionalism and their commitment to their job. I am in awe.”

Csaplik called Spellsburg and BCP co-owner Todd Jourdan “the best people I have ever worked for, they have always taken care of us. I am thankful for my job right now and thankful that I work for Todd and Nancy.”

“It’s cool to be recognized,” said Wilburn, who has seen the billboards and heard the radio messages that are holding truck drivers up as COVID-109 heroes alongside hospital and grocery store workers.

His response to that is modest.

Spellsberg said drivers deserve every bit of the ‘hero’ title.

“They are helping to preserve a way of life, that without them would have ended up in an apocalyptic, doomsday scenario,” she said. “There is a level of bravery there; they are driving into hotspots like Seattle and New York City. That is what makes them heroes… just showing up.”