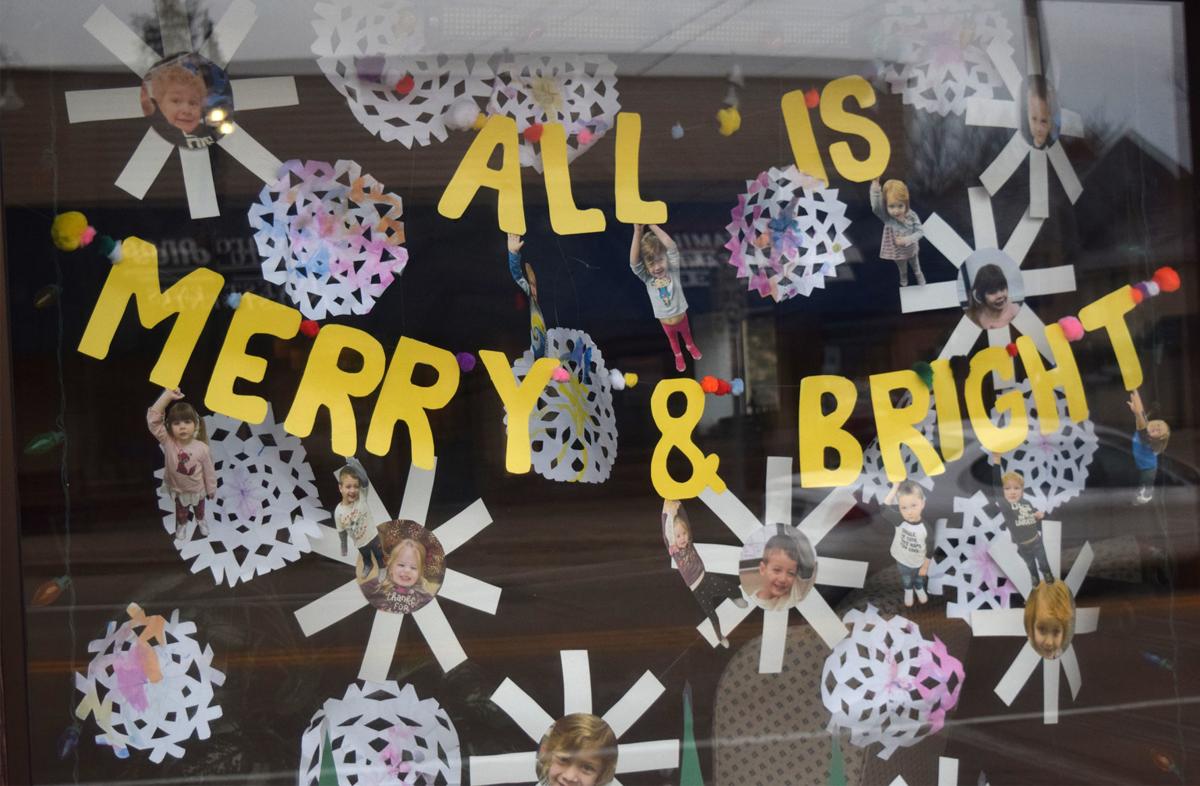 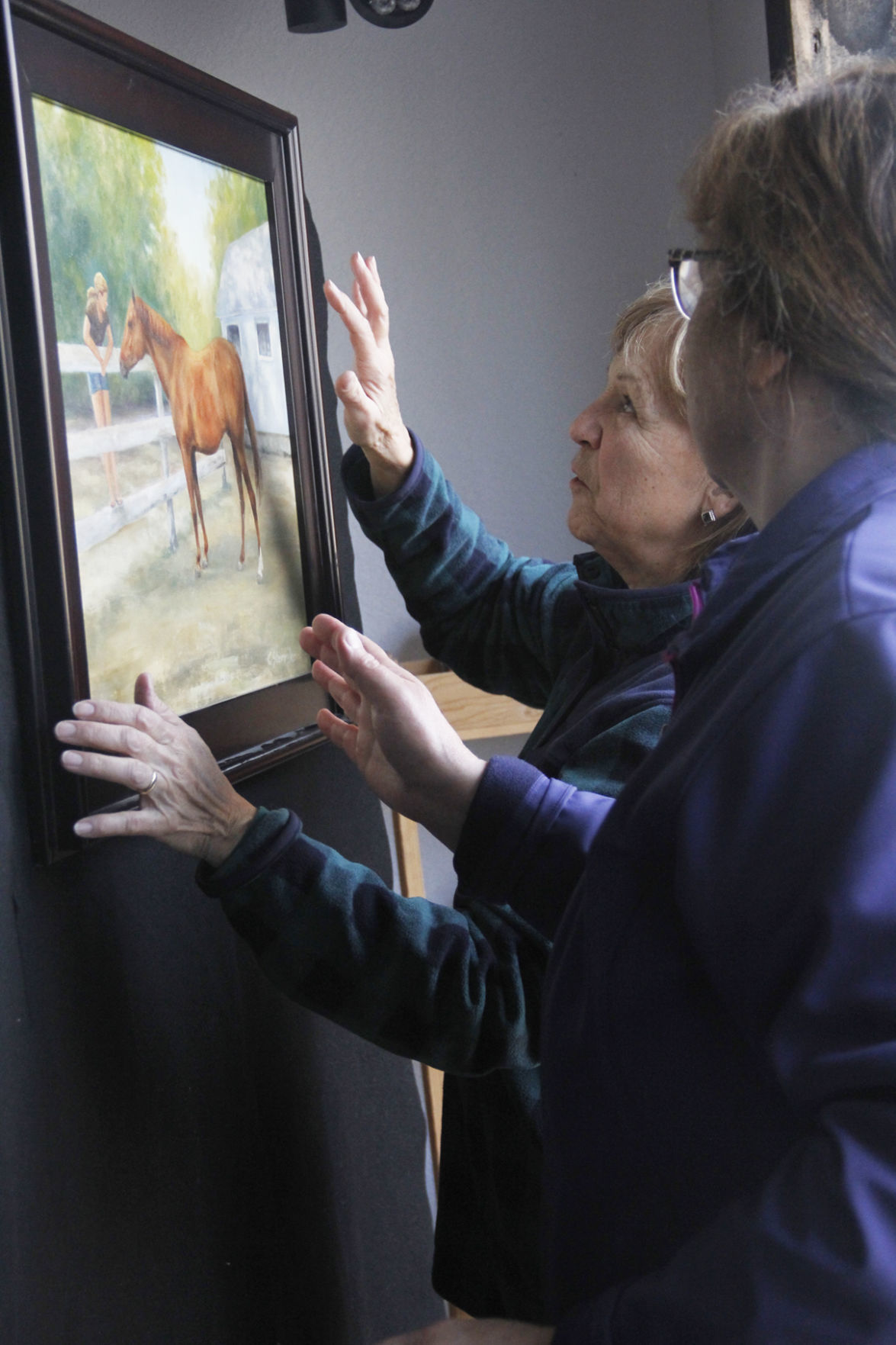 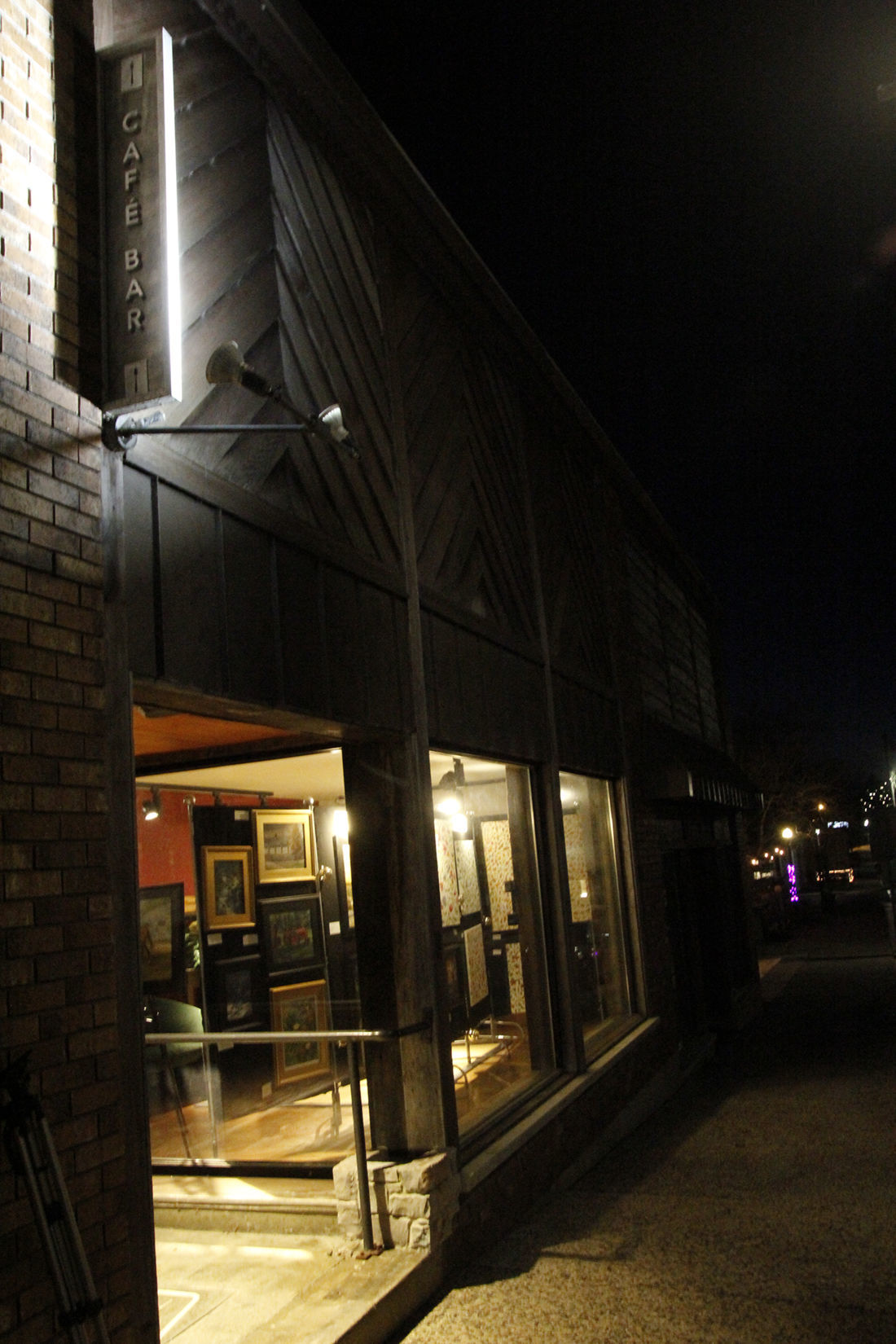 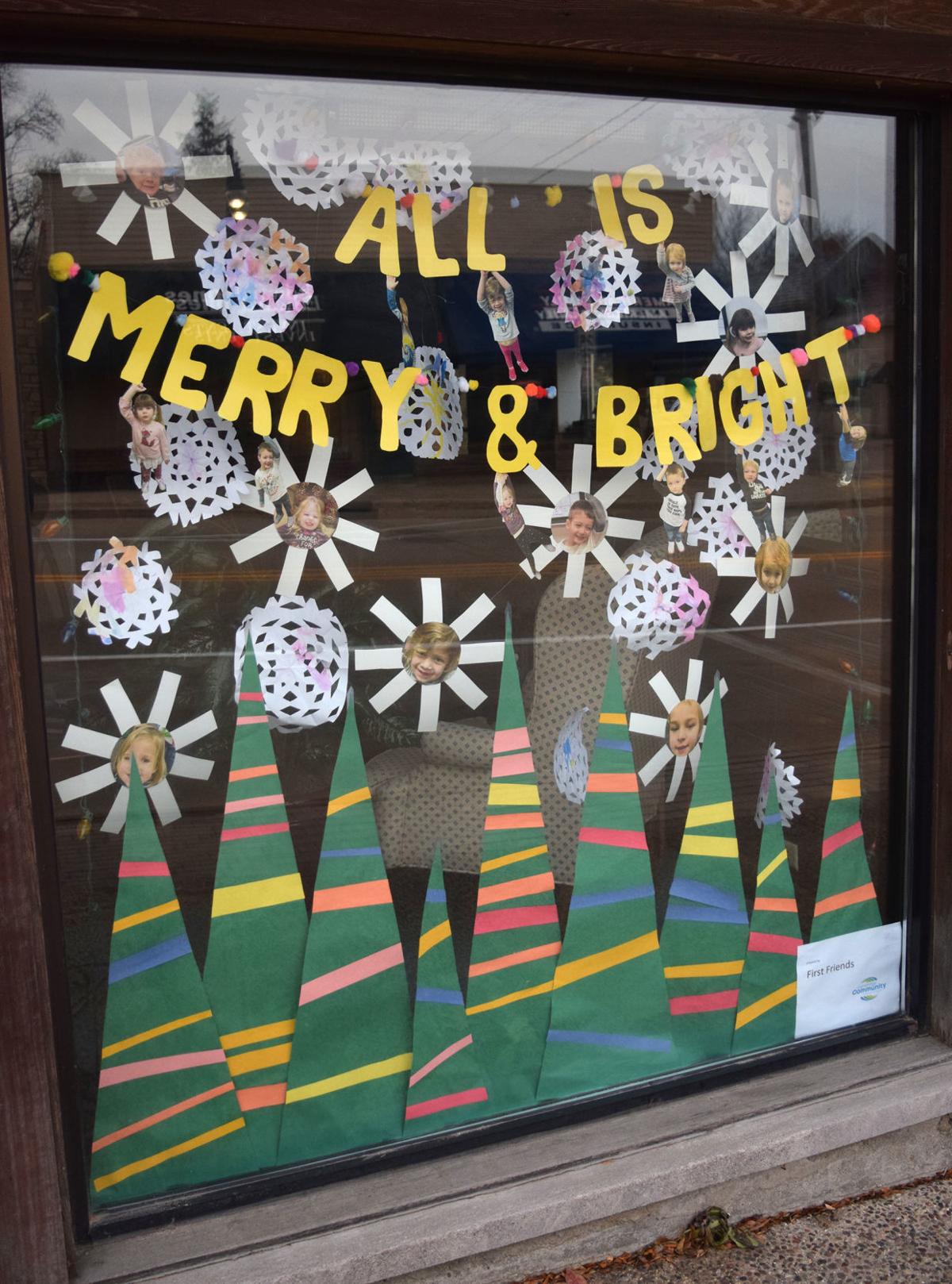 The Nov. 28 print edition of the Cambridge News and Deerfield Independent incorrectly identified Jeremey Jacobson as Jeremy Allen. We regret the error and it is fixed in the online version below.

Some long-vacant buildings are lighting up for the holidays along Cambridge’s Main Street.

Artwork and other festive touches that began appearing in storefronts this week, and upcoming special events, are only temporary measures, though, with no immediate plans to reopen any of the retail spaces after December.

Similarly, retail buildings owned by Charles Fiesel in the 100 block of West Main Street, out of which once operated Prescott Mall/Ward’s Mercantile and The Wood Shed, have passed through a string of holiday seasons in which their windows have remained dark.

And in the 200 block of West Main Street, the former Matt Kenseth Museum that Fiesel also now owns has been sitting empty since being shuttered in 2017.

But in the past week, a plan has rapidly emerged to light up all of these vacant properties through December.

It began, say “Artfully Yours, Cambridge,” organizers Sheila Palinkas and Jeremy Jacobson, with a social media post about a similar, successful effort in Durango, Colorado

The idea exploded from there.

In the past few days, the Cambridge Arts Council has given $100 in seed money to buy supplies like paint, and artists and community groups have offered their talents and their artwork for sale, and displays have begun to appear in long-empty windows.

While the effort to brighten vacant windows is corresponding with Cambridge’s Classic Christmas weekend Dec. 6-8 it isn’t limited to that, extending for the entire month of December, Palinkas said.

It’s not all visual art either; actors may become involved, too.

At the shuttered Wood Shed, 101 W. Main St., for instance, Fiesel hopes to stage a live Nativity in the front window.

“You could have people standing here, you could have a little manger,” he said, stepping into the window enthusiastically as he talked about where participants might pose.

Fiesel said he’s also toying with showing a looping video of “It’s a Wonderful Life,” in the same window with sound projected into the street. By Monday, Nov. 25, Palinkas had posted on social media that she was seeking a DVD of the iconic holiday movie and live nativity participants from local churches. By that afternoon, at least one person had positively responded.

But the doors of the former Wood Shed, located across the street from Veterans Park where a community tree lighting is scheduled as part of Cambridge Classic Christmas, will remain locked other than to let in actors, Fiesel stressed.

Fiesel also noted that he isn’t funding the window displays or the pop-up at the former Kenseth museum either, just opening the doors. Organizing is being done by Palinkas and Jacobson and cash donations are being funneled through the non-profit Cambridge Arts Council.

Fiesel said he’s happy to unlock the space but said that’s all he can currently do, given his time pressures of family and operating Plow.

“I’ll open the door, but I need someone else to do the heavy lifting,” he said. “I only have so much time and ability.”

At the shuttered Ward’s Mercantile, local en plein air — French for “in the air” or “outdoor” — painters Chris Steinmiller and Janet Nelson were busy on Saturday morning, Nov. 23, setting up a display of their work in a window. It was the first window to be decorated as part of “Artfully Yours, Cambridge.”

Prices of their artwork and their contact information will be visible through the window for potential buyers, Nelson and Steinmiller said, but no one will be present selling anything.

And it’s not just adult artists who are getting involved. On a window at Prescott Mall, a display went up Sunday, Nov. 24 of artwork from First Friends, a local preschool program.

Though Palinkas has a tentative vision for temporarily opening up Ward’s Mercantile, 149 W. Main St., to sell coffee and treats, that isn’t certain yet to happen, she said. The space still contains furniture and equipment from a former coffeehouse, the Daily Grind, that closed a few years ago.

What is certain, however, is that a local artist pop-up shop will be open Friday and Saturday nights in December at the former Matt Kenseth Museum, 210 W. Main St.

Palinkas said at least a half-dozen artists have now committed to selling their work during the pop-up hours and possibly also doing demonstrations. Steinmiller and Nelson said they may be among the artists participating.

Fiesel said the holiday season pop-up is a benefit for more than shoppers. He said events like this “give artists the ability to put their foot in the water without a lot of risk,” without long-term space leases or commitments in general for more than a few weeks.

Jacobson and Palinkas, who were meeting with an artist on Nov. 23 just before being interviewed by a reporter, said they’ve been a bit blown away by the past week’s response.

“This is what, day four or five?” and plans are significantly gelling, Jacobson said. “The ball is rolling really fast.”

Jacobson said the hope in lighting up the vacant storefronts is to inspire passing motorists to stop, or to come back downtown on a subsequent day.

“If we can get one person to stop over the holidays and shop because they saw something in the windows, we have done our job,” said Jacobson, who grew up in Cambridge, is an artist himself and is the father of a young son.

The 26-year-old is part of an emerging new generation of local residents who want to see a return to the downtown Cambridge they remember, and they are motivated to work it get back there.

Jacobson said he remembers going downtown at Christmastime with his grandmother, spending hours just looking at the windows and popping into Carpenter’s Village Bakery.

“I want that back so badly,” he said. “I want to be able to walk down the street with my son and have him experience what I experienced when I was a kid growing up in this town.”

Palinkas says she has a photo of children peeking into downtown windows one past Christmas, and also wants to bring that magic back.

“You’re transported to a magical spot; I want other people to feel that,” she said. “That is one of the biggest gifts you can give a child, the opportunity to see, feel, hear, smell the things that will impact them for a lifetime.”

Longtime local relationships are, in part, spurring the current effort.

Carpenter said he agreed to participate because he has for many years personally known the two artists who will be working on the former Village Bakery’s windows.

“It’s always more fun when you know the people, and you know their background, especially on the artistic side,” Carpenter said. “I know they’ll do something very nice and appropriate for the (historic) building.”

As with Fiesel’s Wood Shed, the former bakery’s doors won’t be open. Carpenter said the interior has recently been in a “state of construction,” as he’s made safety and other upgrades.

Carpenter recalled a time, a decade and more ago, when he reveled in decorating his downtown buildings, including the Village Bakery.

“We used to go all out on my buildings: garland, big bows, big red bells,” he recalled.

He said as the local economy has recovered from the Great Recession and U.S. Highway 12 reconstruction of the early 2000s, there has evolved, “a certain amount of people in town that want a reset,” to a time when Cambridge commerce thrived and downtown regularly drew large crowds of shoppers. “That includes me,” he added.

“I don’t think people are watching their pennies as much as they did 6, 7, 8 year ago,” Carpenter continued. While he said he has no plans to again sell donuts, he said he is considering a future use for the former Village Bakery building that he is keeping under wraps for now.

Until that can come to fruition, he agreed that dressing up the vacant windows during the holidays, “showcases our little town not only to people in the community but also to people that travel through it.”

Fiesel, too, said the time feels ripe for a resurgence.

“I think Cambridge is a different place now,” Fiesel said. “There are more businesses open than before.”

And yet, he said, too many motorists still simply pass through.

“You have to give them a reason to stop,” he said.

Nelson moved back to Cambridge about two years ago, after living for a few years in New Jersey. As she worked with Steinmiller to set up the window at Ward’s Mercantile she, too, said she feels a change happening.

“Cambridge has gone through some ups and downs, and I see that they are coming back,” she said.

Jacobson said local artists interested in participating in the pop-up at the former Matt Kenseth Museum may contact him for more information at (608) 501-7267 or by email at jeremyallenj9@gmail.com.

Volunteers are needed to help staff the pop-up hours, Jacobson noted. Palinkas said other questions may be directed to her at sheila@lmsdevelopment.com.

To make a cash donation, reach out Palinkas or the Arts Council directly by email at: cambridgewiarts@gmail.com.