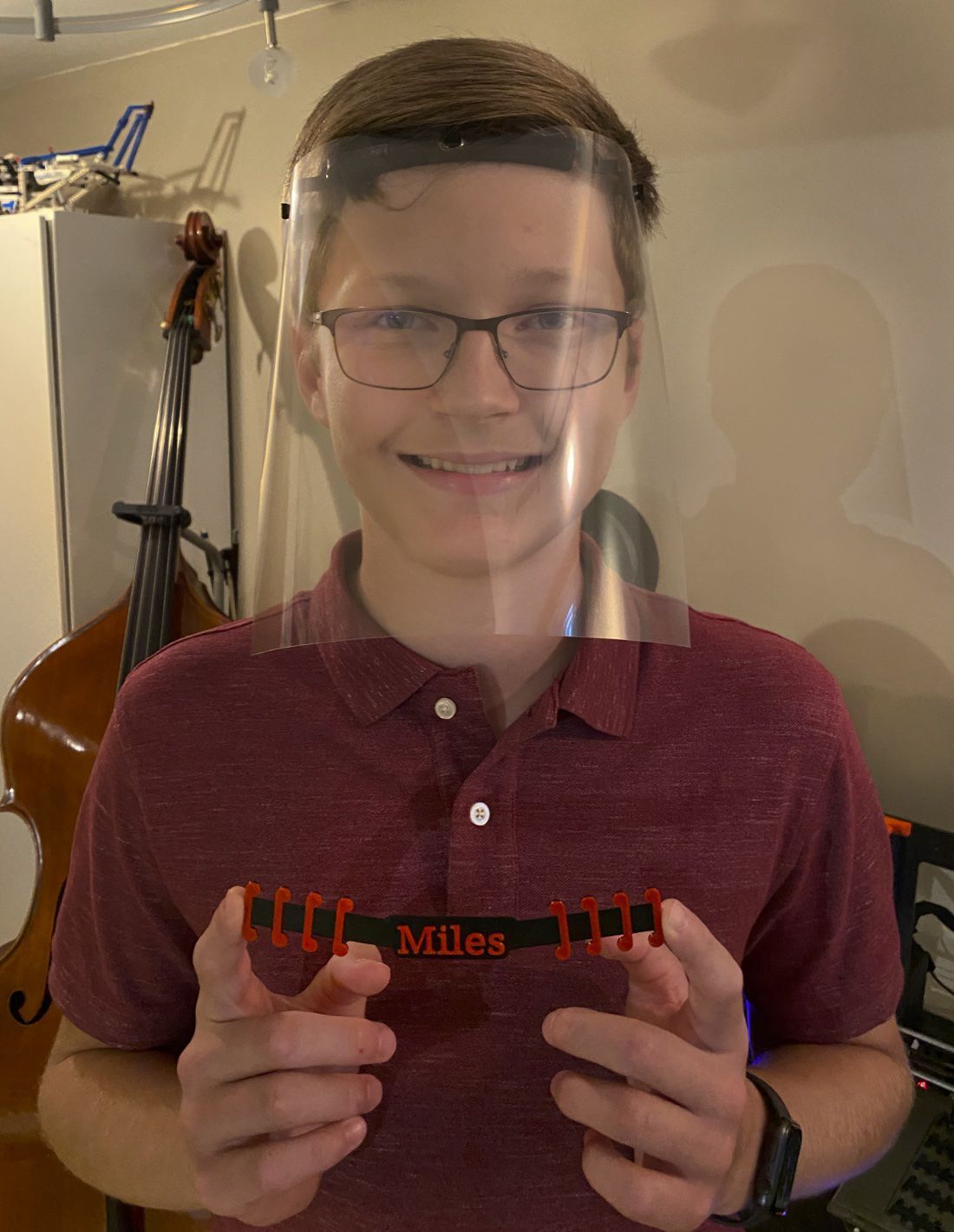 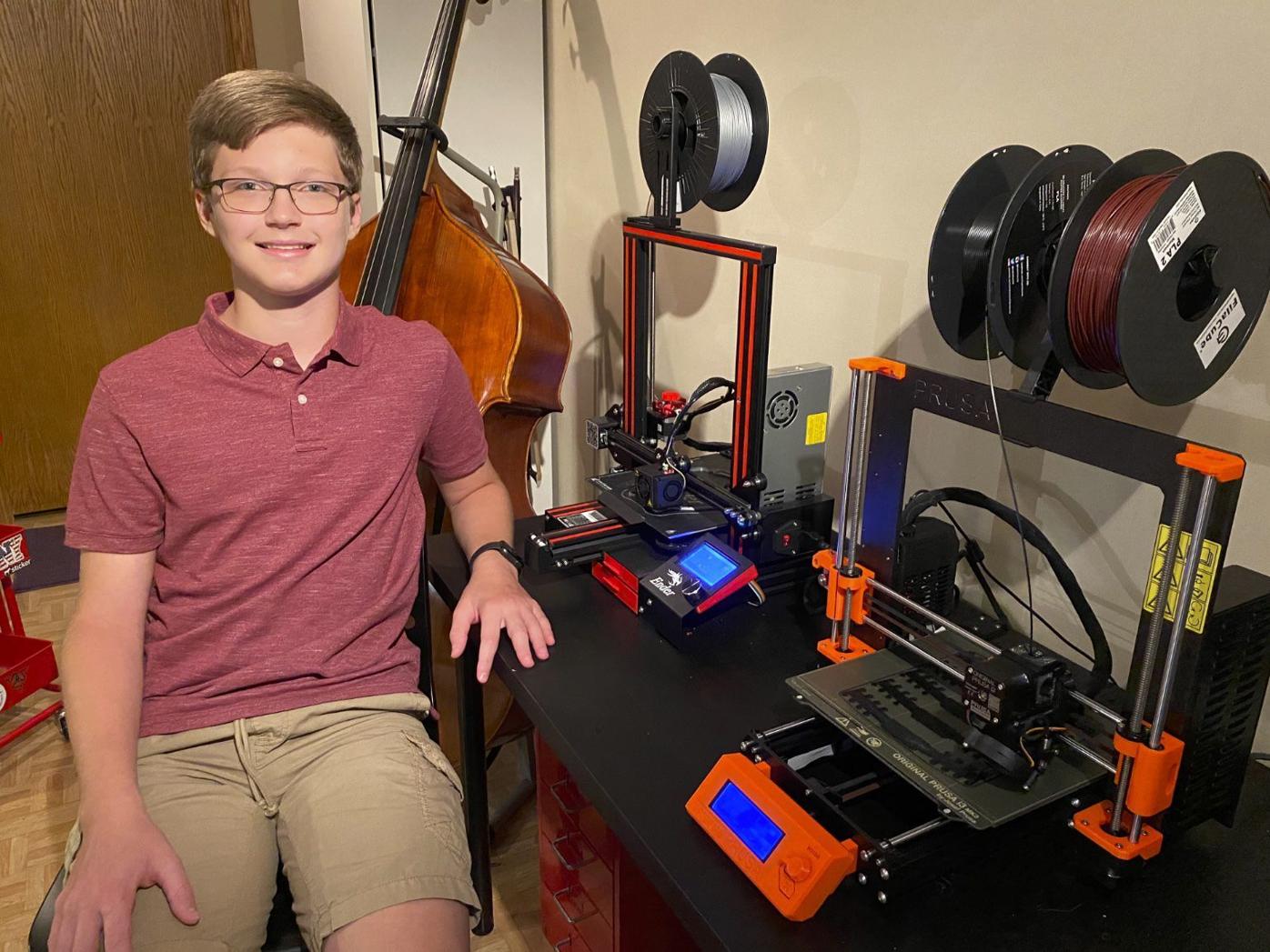 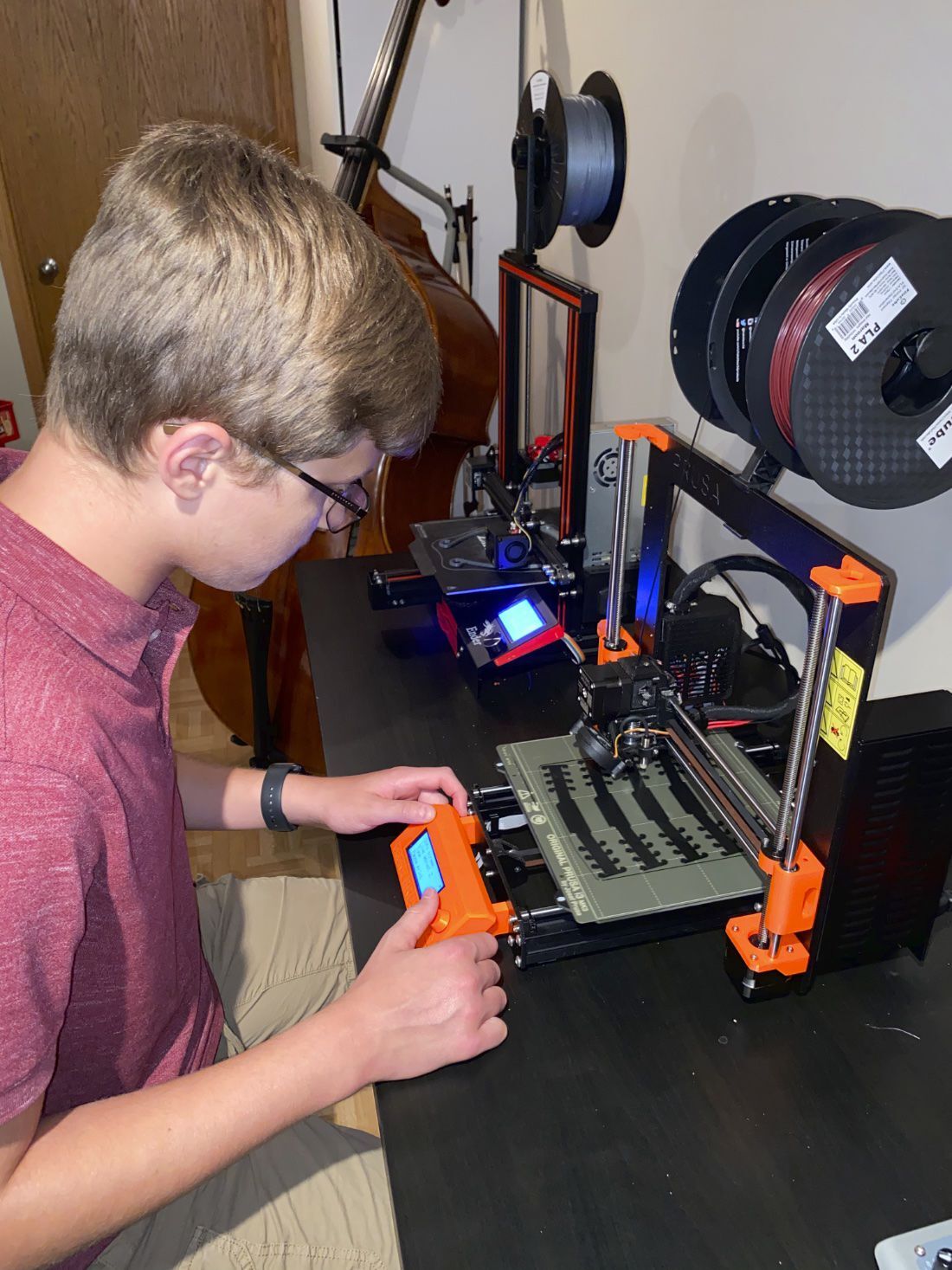 Stuck home in a pandemic, Miles Petersen had a 3D printer and a lot of time.

The 15-year-old, who will be a sophomore this fall at Deerfield High School, thought he could do more useful things with the printer than producing cell phone stands, keychains and small toys.

Since April, Petersen has assembled about 100 face shields for local workers by joining a head-band-like piece of 3D-printed plastic, that sits tight against the wearer’s forehead, to a 3-hole-punched transparent sheet of plastic that shields the wearer’s face. In a bygone educational era, the plastic sheets were laid on overhead projectors.

Petersen prints the headbands, purchases the transparent sheets, and assembles the finished face shields at his family’s home in Cottage Grove. From there, they’ve been donated to hair stylists, grocery and convenience store workers, dentists, an array of medical clinics and others.

Petersen has also used his original printer, plus a second printer that was a recent birthday gift, to produce about 500 small devices he calls “ear savers.”

Ear savers are a piece of molded plastic that stretches across the back of a person’s head. Looping the elastic bands of a coronavirus facemask over the plastic piece, rather than over a wearer’s ears, takes pressure off the ears. Petersen said that’s especially important for people who need to wear a mask for long hours at work. The ear savers are adjustable, Petersen notes, allowing a mask that is too tight or too loose to be adjusted for a better fit.

As with the face shields, Petersen has given the ear savers away for free, including to area schools. He said the Deerfield school district, where his father, Ryan, is the longtime middle and high school band director, has been a special recipient. He’s produced ear savers for Deerfield school staff with their names printed in maroon, the school’s colors.

And that’s only what he’s produced for local use.

Additionally, this spring, Petersen connected with Operation Shields Up, a group working to get CAD (computer-aided design) plans for face shields into the hands of owners of 3D printers across the United States. Petersen said the idea was for 3D printer owners to all work from the same design, for consistency, and print the pieces at their homes.

“Who knows where they are now,” he said.

“He started with just the ear savers, but when he found out about Operation Shields Up, he wanted to be part of a bigger initiative and was interested in printing something new,” Ryan Petersen said.

Mostly, Ryan Petersen said, “he was just looking for ways he could help out while stuck at home.”

“Our PPE are 100 percent donation based and not for sale, so we depend desperately on others to help keep us supplied and running,” the website said

On its website, Operation Shields Up said it distributed 32,000 face shields nationwide through early June, before it wrapped up its effort.

Locally, demand for the ear savers and face shields surged in late spring and has since remained steady, with no sign of slowing, Petersen said. He said he expects to keep printing and donating items even after school resumes this fall.

Petersen estimates that one of his face shields costs about 30 cents to produce. He has begrudgingly accepted some donations from recipients who have insisted on paying for them, he said. All of those donations have gone to buy more printing supplies.

Knowing his production cost, he said he’s been amazed to see face shields for sale online for $12 or more.

“They are a lot cheaper to make than buying them,” he said.

Both printers are in constant production, Petersen said. He has set an alarm to awaken throughout the night, to remove one finished item from a printer and to start another one. It takes 2-3 hours for one face shield headband to print, which he admits requires “a lot of patience.”

With both printers running, he said he can produce about 15 ear savers in one hour.

With most activities still canceled due to COVID-19, the nighttime schedule hasn’t posed a problem, he said.

“I don’t really have anything going on besides this,” Petersen said.

He said he viewed his first 3D printer mostly as a toy. He became interested in having one after learning about them in middle school science class.

“It’s just fun to play with a 3D printer,” said Petersen, who’s exploring the idea of studying engineering in college.

But as the pandemic intensified, he decided “I wanted to give back. I felt I could really help people that needed these things,” he said.

Petersen said the feedback he’s received from recipients has been gratifying.

“Just hearing from all these happy people, seeing that this made their life easier, that sticks out and motivates me,” he said.

Petersen’s mother, Becky, said the effort has been a way for him to support essential workers, and to stay busy over many months when there’s been little else going on.

“It’s been nice to have something that’s motivating and relevant and useful to fill his time,” she said.

For more information on Petersen’s face shields and ear savers, email him at: miles3dprints@gmail.com