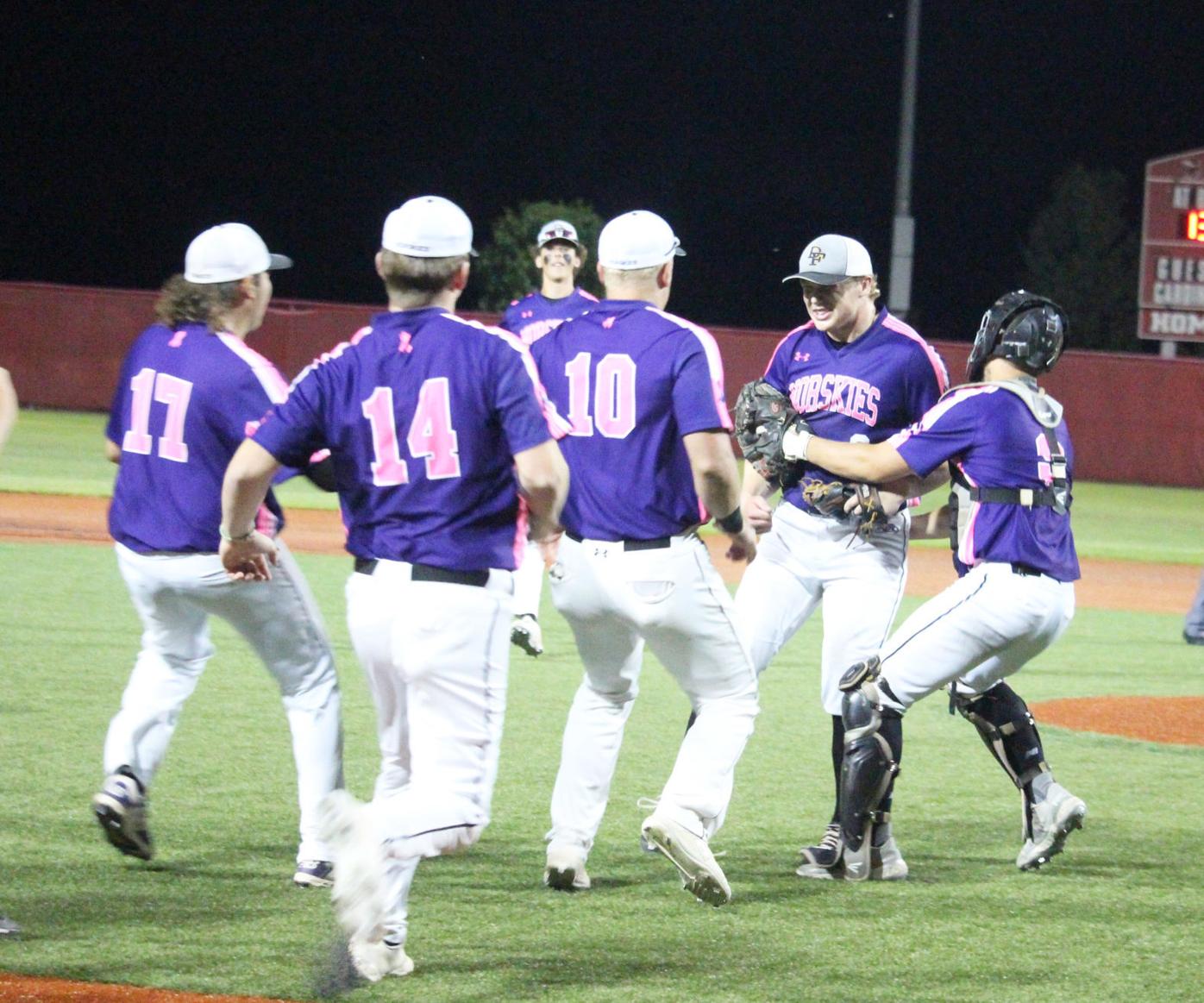 The Norskies surround pitcher Mason Kirchberg after he struck out the final batter in DeForest’s 8-6 regional semifinal win over Madison West. 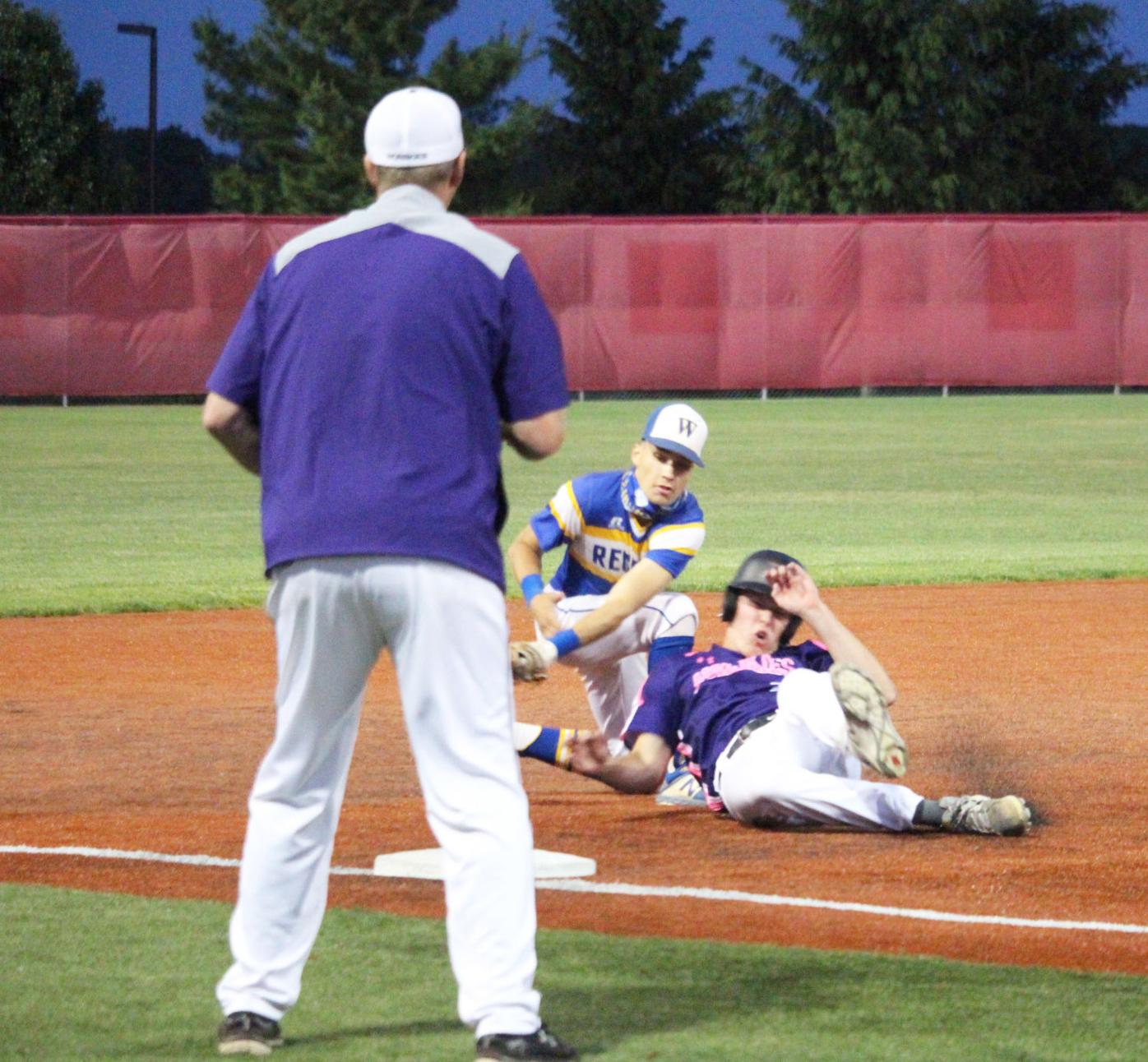 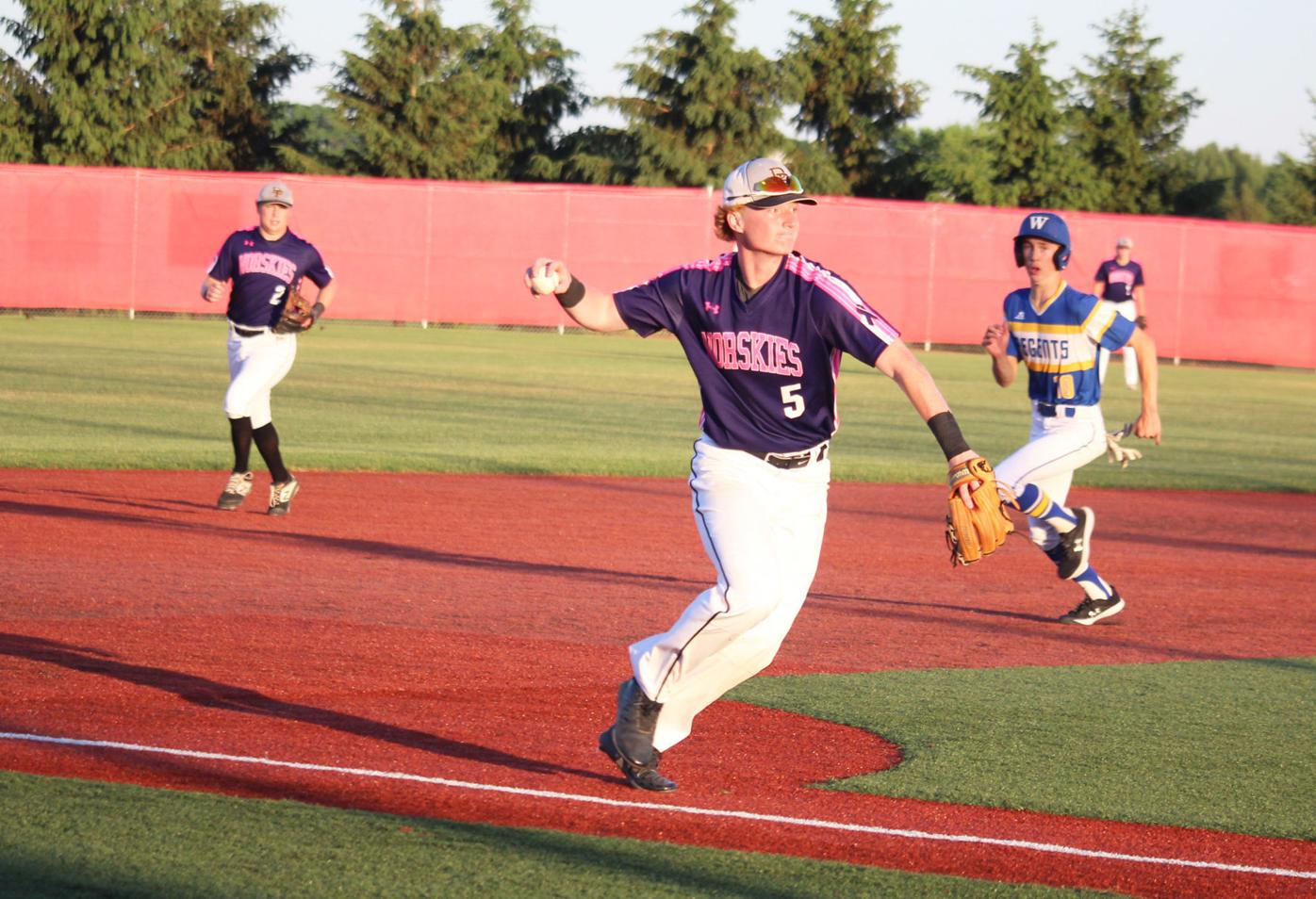 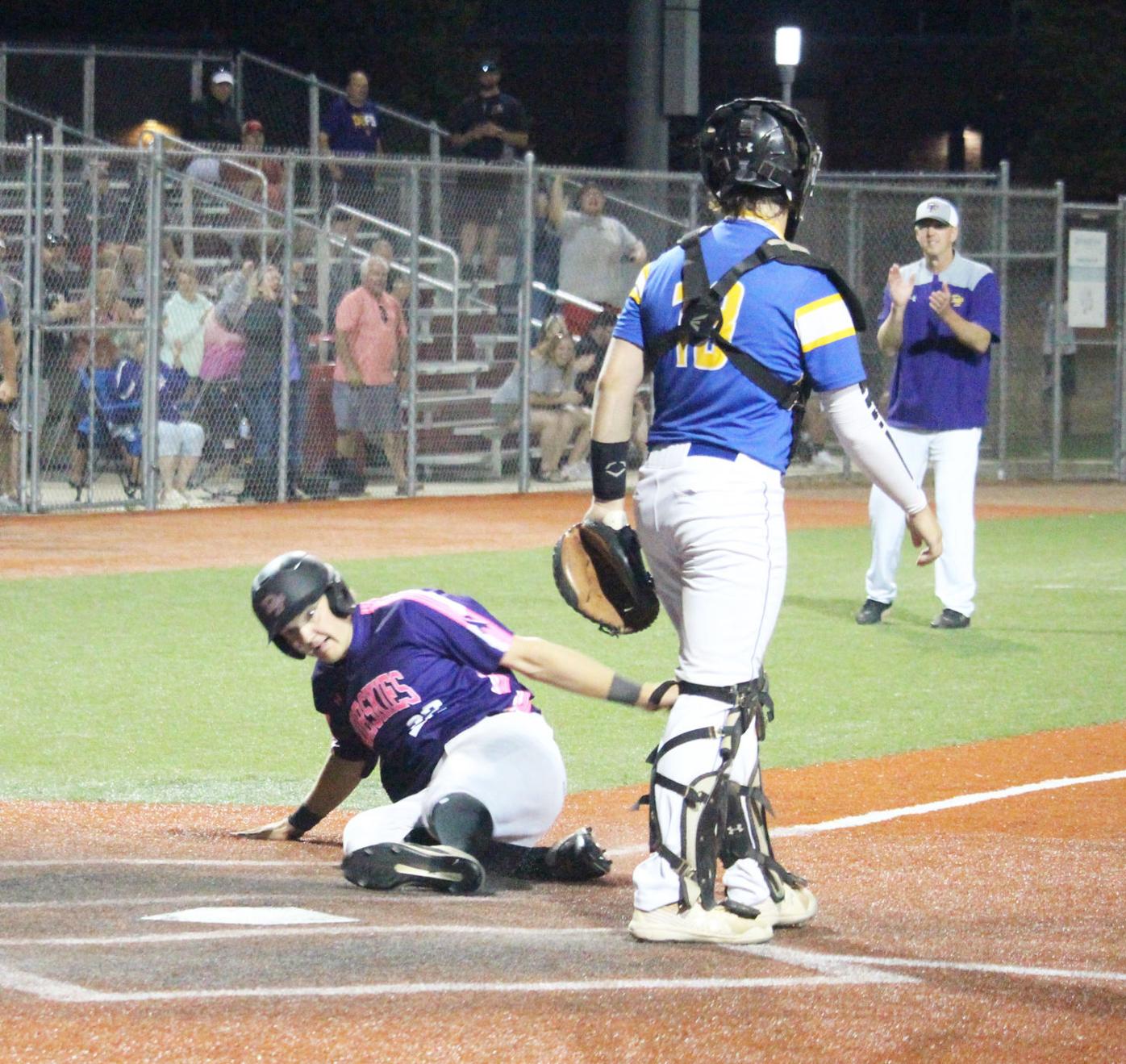 Justin Hausser scores during the fifth inning of the Norskies’ come-from-behind win over Madison West. 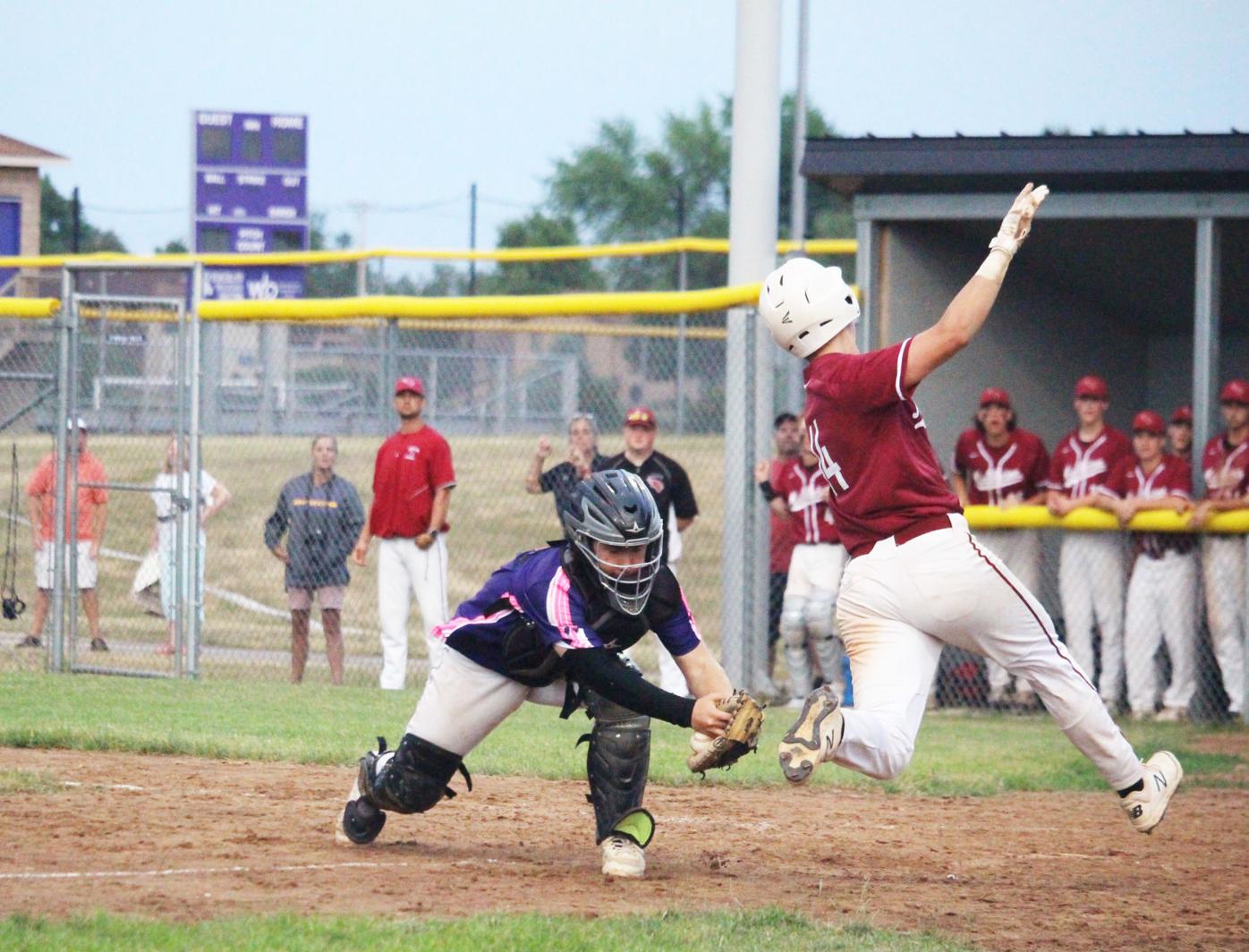 The Norskies surround pitcher Mason Kirchberg after he struck out the final batter in DeForest’s 8-6 regional semifinal win over Madison West.

Justin Hausser scores during the fifth inning of the Norskies’ come-from-behind win over Madison West.

The DeForest prep baseball team had a lot of momentum heading into the WIAA Division 1 postseason after winning a Badger North Conference title and only losing three games during the regular season. But, the Norskies faced two tough challenges in the first two rounds of regionals.

In the regional semifinal on June 15, the second-seeded Norskies rallied from five runs down to beat seventh-seeded Madison West in Sun Prairie.

“It was a rollercoaster but I was proud of how we stayed in there the whole game and came back,” Norski senior Mason Kirchberg said. “We didn’t hit the ball early on and we didn’t help out our pitcher in the field.”

DeForest was hoping for another comeback in the regional championship against third-seeded Middleton in Waunakee on June 17, but the Cardinals held on for a 7-5 win.

“I was really surprised because we didn’t hit the ball as well as I thought we would,” DeForest coach Harold Olson said. “We didn’t see anything different than we did in the first regional game. We struggled a little bit in this game, but hung in their until the end.

“But, I’m proud of the way the players battled,” he added. “Unfortunately, we lost. But, the boys gave us everything they had. Give Middleton credit, they played a great game and executed successfully to win.”

Despite being the higher seeded team, the Norskies were unable to play their regional games at home because of construction to their field.

“It was tough on our seniors to not be able to play on their home field for the playoffs,” Olson said.

The Norskies finished the season with an overall record of 19-4.

“It was a really special season,” Olson said. “It was a lot of fun.”

Middleton went on to win its sectional semifinal game 8-6 over top-seeded Madison Memorial, but fell 2-1 to Onalaska in the championship game this past Tuesday.

Nothing went right for DeForest at the start of the regional semifinal game with Madison West. Through four innings, the Norskies trailed 6-1 and had just two hits and committed four errors in the field.

But, the Norskies scored the final seven runs of the game to earn the come-from-behind win.

Thanks to multiple DeForest errors, the Regents scored two runs in top of the first and second innings.

DeForest got one of the runs back in the bottom of the second after Josh Jansen scored on a ground ball by Ryan Buschmann.

Madison West scored runs in the top of the third and fourth frames to go up 6-1.

The Norskies started the comeback with a pair of runs in the fifth. Logan Engeseth plated Justin Hausser with a single, while Nolan Hawk scored on the same play after a throwing error.

DeForest completed the comeback with a five-run outburst in the bottom of the sixth.

Hausser opened the scoring in the sixth with an RBI double, while Engeseth followed with a run-scoring single to tie the game.

Kirchberg had a third straight hit for DeForest, a triple, to give the Norskies the lead, 7-6.

“That was awesome,” Kirchberg said. “I was so locked in to help the team win.”

Olson then followed with a sacrifice fly to score Kirchberg.

“I was just doing my job to help the team win in any way possible,” Olson said.

Hausser and Jansen both had three hits for the Norskies, while Engeseth and Hawk added two each.

The Norskies held three leads in the game. The first came after Jansen scored on an error in the bottom of the second inning.

The game went into a rain delay after Middleton tied the game on a home run by Eric Pongrantz in the top of the third.

When the game resumed, DeForest regained the lead, 2-1, after Hawk scored on a single by Olson in the bottom of the third frame.

After Middleton tied the game in the top of the fourth, the Norskies took their final lead in the bottom of the fifth after a triple by Olson allowed Kirchberg to score.

Middleton went up 4-3 after scoring a pair of runs on a bizarre play in the top of the sixth. Both runs scored when the Norskies had a base runner in a rundown in between first and second base.

The lead grew to 7-3 with three more Cardinal runs in the top of the seventh inning.

The Norskies did make things interesting in the bottom half of the seventh.

“Going into the bottom of the seventh there was no doubt in my mind that we had a chance to tie it up,” coach Olson said.

Jansen and Kaufmann both drove in a run in the bottom of the seventh and DeForest had the winning run at the plate when the game ended.

Olson had a team-high three hits for the Norskies, while Hausser finished with two.

Hausser, Jansen, Hawk and Kellen Grall all pitched for DeForest and combined for two strikeouts and seven walks. Jansen took the loss.