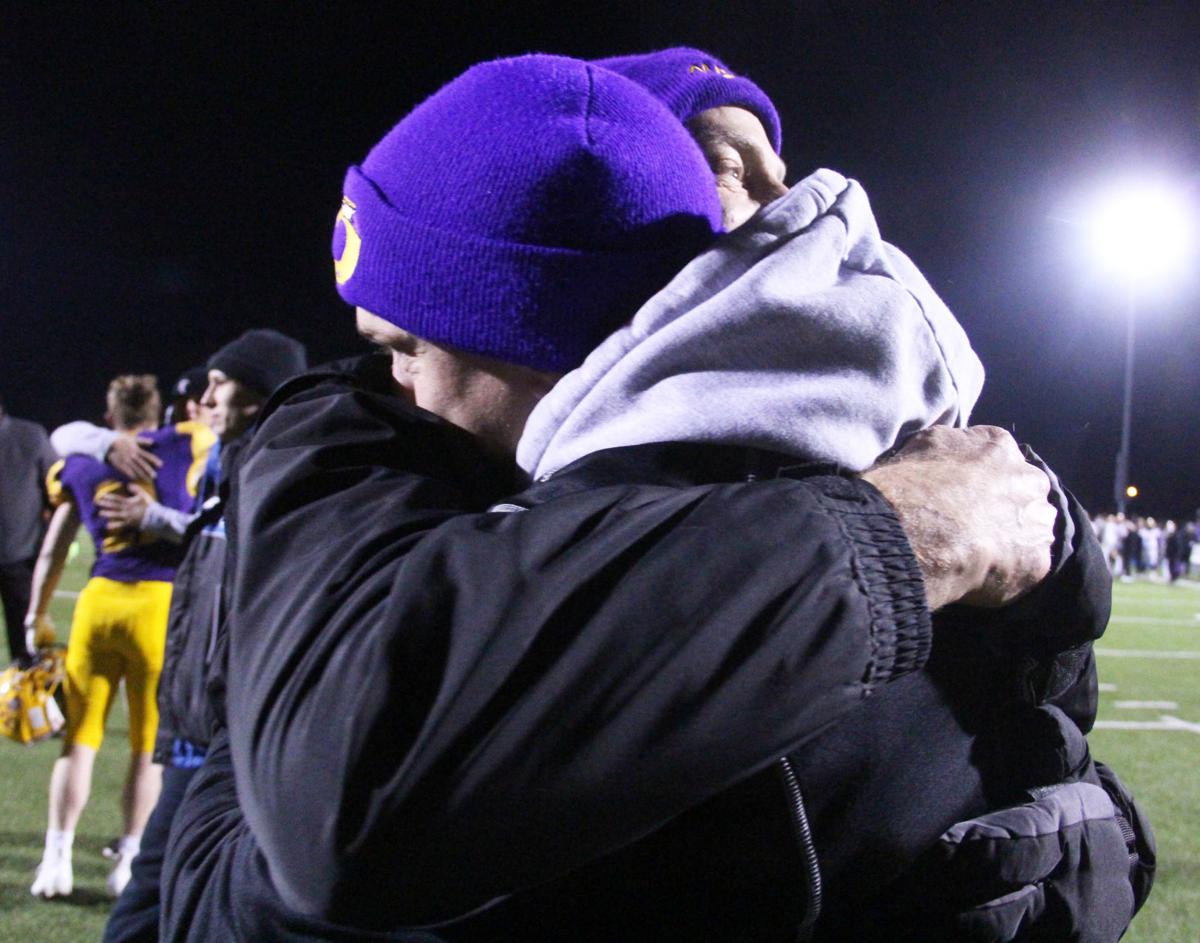 DeForest coach Mike Minick hugs his son, Brett, after the Norskies clinched a trip to the state championship game with a 14-9 victory over New Berlin Eisenhower. 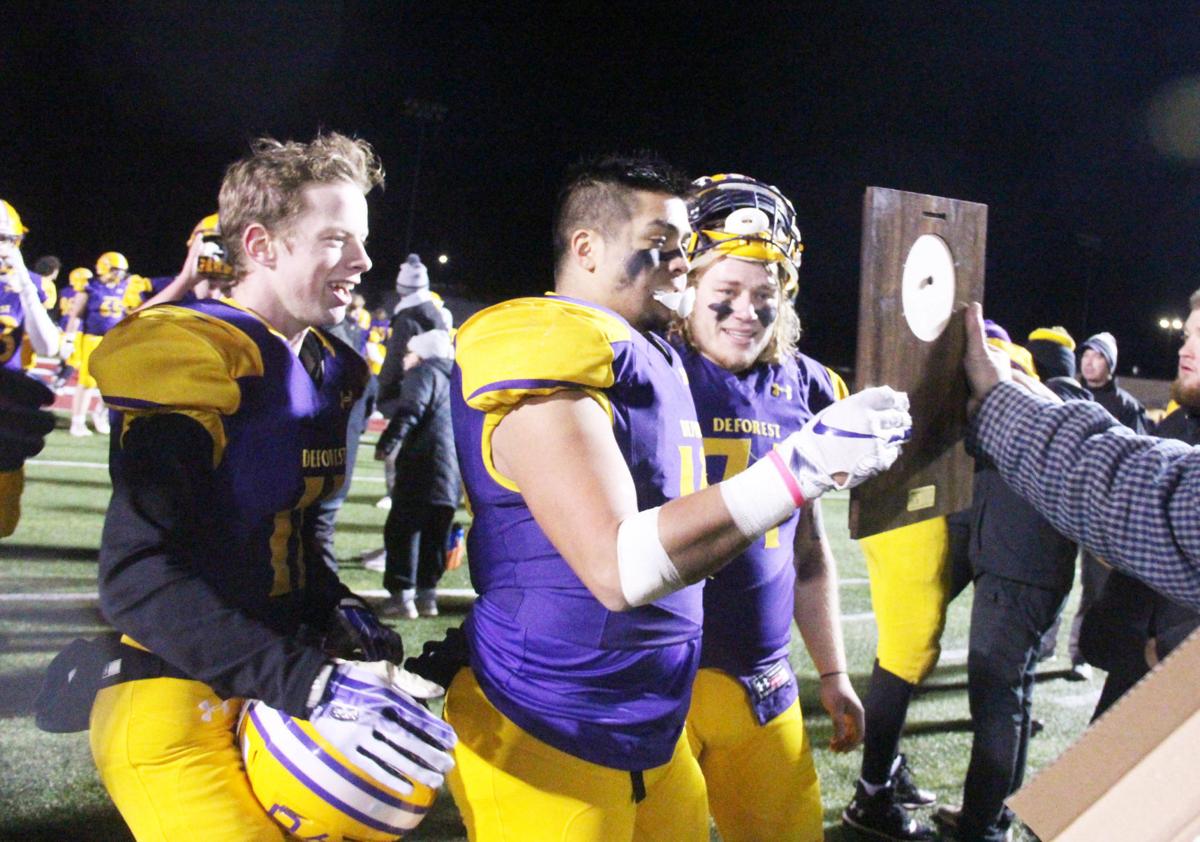 DeForest coach Mike Minick hugs his son, Brett, after the Norskies clinched a trip to the state championship game with a 14-9 victory over New Berlin Eisenhower.

With nearly all of its victories coming in a convincing manner, the DeForest prep football team found itself in a battle for this first time in their WIAA Division 3 Level 4 playoff game with New Berlin Eisenhower in Slinger last Friday.

“It was a great game,” DeForest coach Mike Minick said. “They are a great team and we hung right in there and battled.”

The Norskies used some late takeaways to put away Eisenhower 14-9 and earn a trip to the state title game.

“This is just unbelievable,” Minick said. “I wanted to put the game away a little earlier, but I’m super happy for our players, coaches, school and community. I can’t express how amazing this is. I love this group of kids.”

The win puts the Norskies into the state championship game for the first time since 2007.

“It is amazing because we have wanted this for so long,” Norski offensive lineman Colby Hartig said. “Tears came after that final interception and it was the best feeling in the world.”

The Norskies improved to 13-0 with their closest victory of the season. It is their first victory by less than 20 points.

“This means everything,” senior quarterback Trey Schroeder said. “This is why we play.”

DeForest will be looking for its first state title since 1982 when it takes on Menasha at 10 a.m. on Nov. 22 at Camp Randall Stadium.

“It is a dream come true,” senior defensive end Cole Yocum said. “We have been talking about playing at Camp Randall since the fourth grade.”

The Norskies had their hands full all night, but came up with the big plays when they needed them. They were held to a season-low 224 yards of offense, including only 116 rushing.

“It was a good battle because they are a good team,” Hartig said. “They had a lot of speed.”

DeForest’s defense came up with the first big play of the game, as Edwyn Erickson recovered a fumble on the opening drive and returned it to the Eisenhower 21-yard line.

“When I first got it, I didn’t know what to do because I don’t get the ball much,” Erickson said. “I just started running. It was great to get some momentum for us.”

Six plays later, the Norskies got on the scoreboard with a 1-yard touchdown run by Trey Schroeder.

“It was a low scoring game and every point mattered, so it was big to get that early touchdown,” Schroeder said.

After missing a field goal on its second drive of the game, Eisenhower got a 22-yard field goal from Stjepan Peharda to cut the deficit to 7-3.

DeForest struggled to move the ball on offense the rest of the first half, but its defense held strong to keep the lead at 7-3 at halftime.

The Norskies put themselves in a great position to win the game after going on a 10-play, 87-yard scoring drive in the third quarter.

“We told the coaches to keep running behind us, we would keep pounding,” Hartig said.

Schroeder capped off the impressive drive with a 4-yard scoring run. Jagger Lokken added the extra-point kick to increase the lead to 14-3 with 1 minute, 28 seconds remaining in the third.

“That was a very good drive,” Schroeder said. “We executed well.”

The momentum didn’t last long, as Eisenhower answered right back on the ensuing drive.

New Berlin cut the deficit to 14-9 with a 2-yard touchdown pass from Gabe Seifert to Ben Buechel with 10:26 remaining in the game. They failed on the two-point conversion attempt.

The Norskies defense sealed the victory in the fourth quarter with a fumble recovery by Cole Yocum and two interceptions by Deven Magli on the final three drives of the game.

“We are fighters and are not going to give up,” Yocum said. “We have worked way too hard for this.”

Schroeder finished the game 9-of-13 passing for 108 yards. He also rushed 11 times for 22 yards and two touchdowns.

Logan Bierman led the Norskies with four catches for 50 yards.

DeForest’s defense was stingy against a very good Eisenhower offense, which came in averaging 30 points per game.

“Our defense won this game for us, they held down a very good team,” Schroeder said.

Erickson, Trey Warne and Yocum all had sacks for the Norskies.

“We have played with each other for so long we know what each other can do and we trust each other,” Erickson said.

Seifert finished the game 13-of-29 passing for 221 yards, a touchdown and two interceptions.

Ben Lapp had three catches for 83 yards for Eisenhower, while Buechel added six catches for 60 yards and a touchdown.