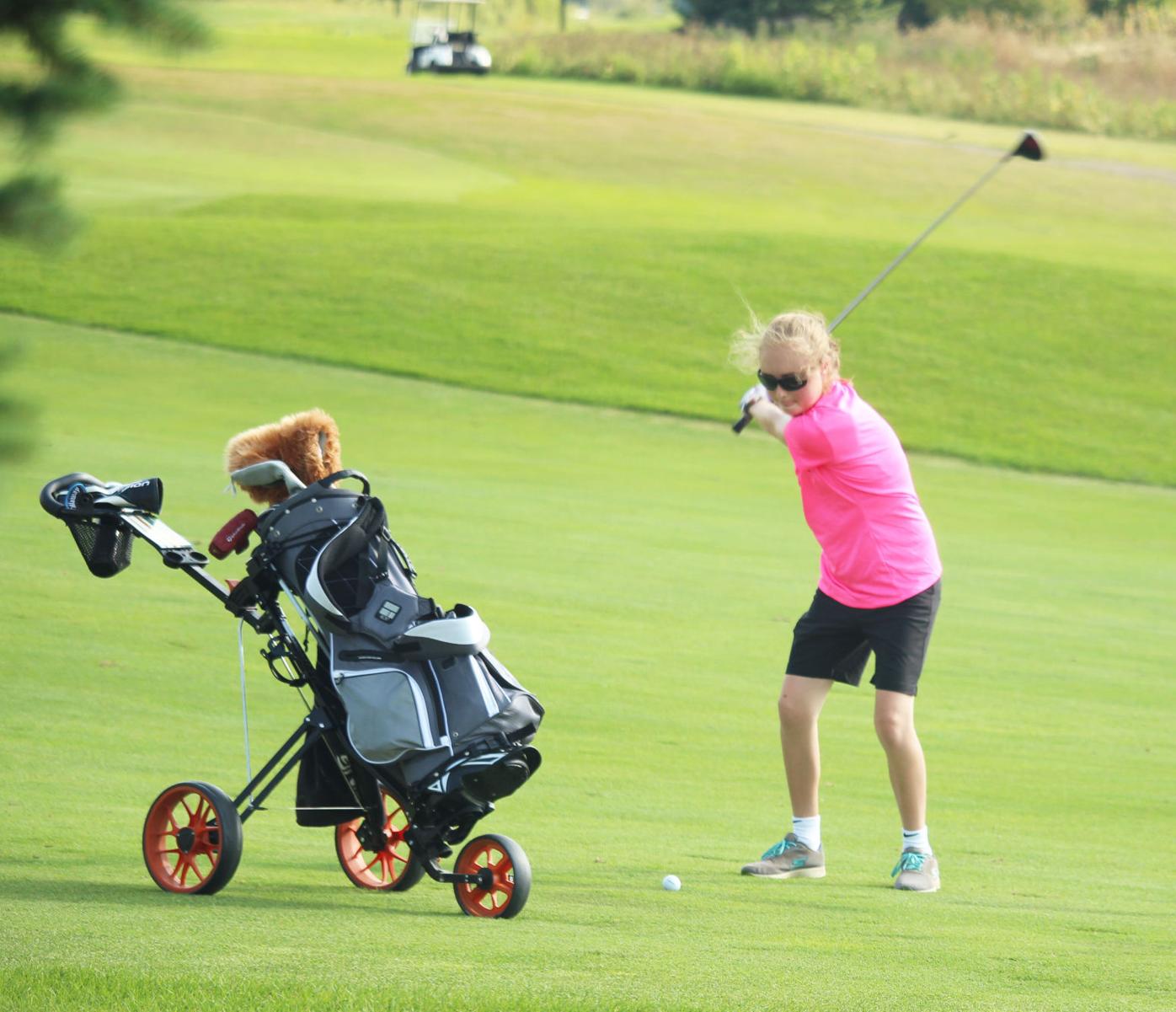 Taryn Endres was awarded the Norskies’ Most Valuable Golfer this fall. 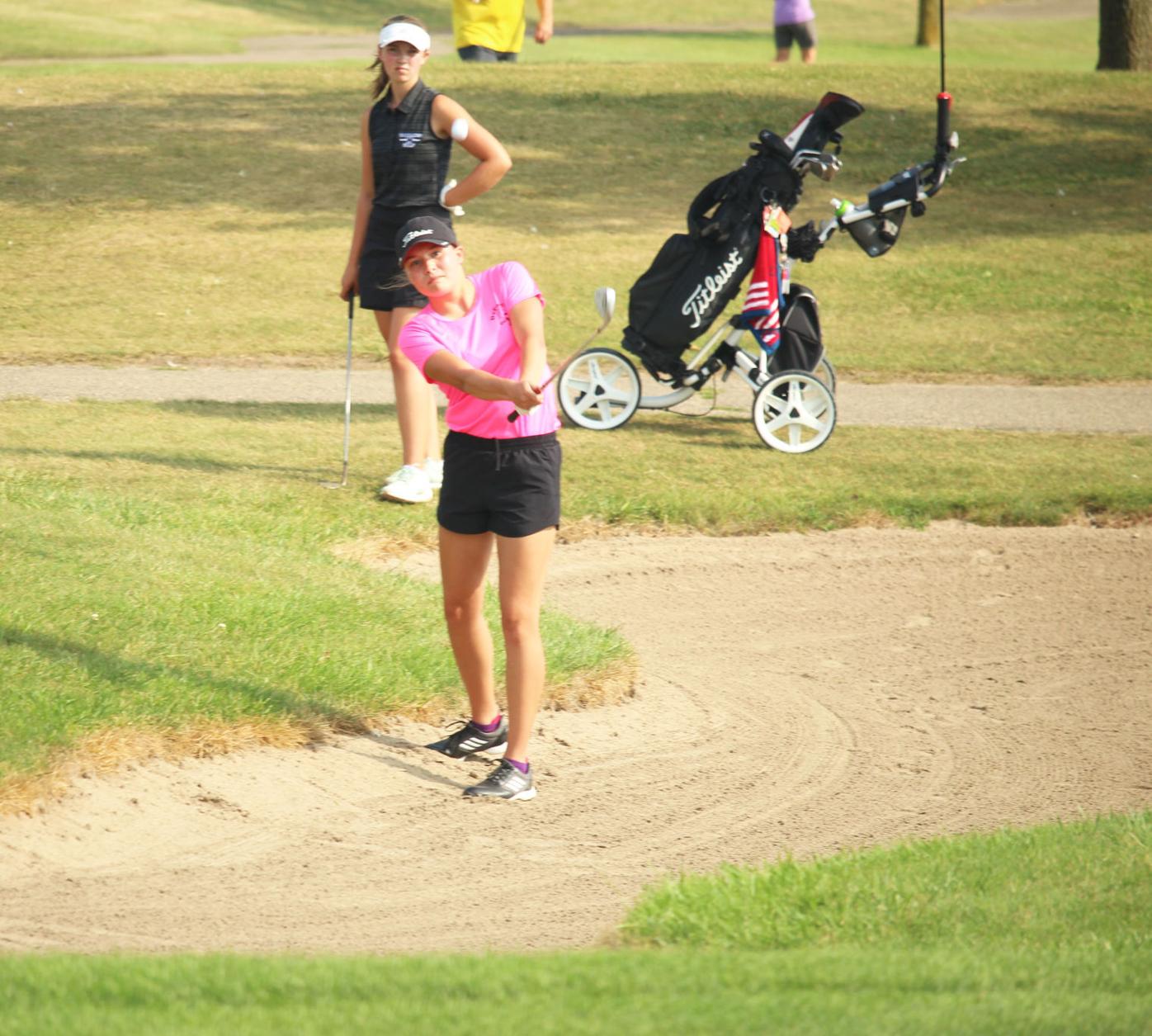 }Lexy Scheuerell was the only Lady Norskies to advance to this year’s sectional meet.

Taryn Endres was awarded the Norskies’ Most Valuable Golfer this fall.

}Lexy Scheuerell was the only Lady Norskies to advance to this year’s sectional meet.

There was a lot of uncertainty surrounding the fall high school sports season due to the COVID-19 pandemic, but the DeForest girls golf team was able to navigate the challenges to have a solid 2020 season.

“Each and every day of the 2020 season was a blessing,” DeForest coach Scott Siemion said. “With so much uncertainty everywhere else, schools meeting virtually, and the conference schedule scrapped, we were able to assemble for practices and compete in some modified matches. In fact, this season actually allowed our younger players more quality events.”

This fall marked the fifth season for the Lady Norskies’ program and their number of athletes increased to an all-time best 15.

“Some of the girls were new to the game, but most knew fundamental golf basics,” Siemion said.

Due to restrictions, the Norskies limited in the number of multi-team events, but they scheduled a handful of duals during the regular season.

“We were placed in a pod with Waunakee, Edgewood, Watertown and Fort Atkinson for duel events and added a few invites to bolster our schedule,” Siemion said. “We played best ball, scramble and alternate shot formats for our matches early on which was a refreshing change from playing their own ball at every event. We also played mostly with our own teammates to limit outside contacts. Once it was determined that the WIAA would conduct a state tournament series we then switched our focus and formats to prepare for this end-of-the-year event.”

The Lady Norskies opened the season by placing second at the Waunakee Invite.

DeForest also closed the season at home against Waunakee, along with Madison Edgewood. Both the Warriors and Crusaders went on to place in the top three at state.

“We finished third, but had to play a very high fourth score,” Siemion said. “We gained valuable experience competing at a very high level.”

Before the start of the WIAA postseason, the Norskies hosted several Badger North Conference schools at Lake Windsor Country Club. They finished in second place, four strokes behind Reedsburg.

The Lady Norskies finished sixth at the WIAA Division 1 Portage Regional with a 381, but Lexy Scheuerell was able to advance to the sectional individually with her round of 86.

Waunakee won the regional crown with a 328, while Tomah (339) and Onalaska (347) were second and third, respectively.

Scheuerell finished off DeForest’s season by placing 15th at the Tomah Sectional with a 91.

The Norskies handed out several awards after the season. Taryn Endres was named the team’s Most Valuable Golfer.

The Rookie of the Year award went to Ingrid Harke, while Scheuerell was named captain. Tori Schnell was awarded the Most Improved, while Tess Armstrong earned Most Improved Freshman.

Siemion was appreciative of the leadership of his senior group this season.

“A big congratulations to seniors Lexy Scheuerell, Tori Schnell and Kaylin Nesbitt, each of them is an amazing young person,” Siemion said. “They have shown great empathy for teammates and opponents and have improved so much as golfers. Their leadership and perseverance has helped guide our program for the last four years.”

Siemion was thankful for all the help he received this season.

“We would like to thank Lake Windsor Country Club, the Gotzion Family, Mike Dunlap , Scott Mowatt and head professional Jordan Ray,” Siemion said. “Your continued support of high school golf fuels our passion and directly helps in our success.”