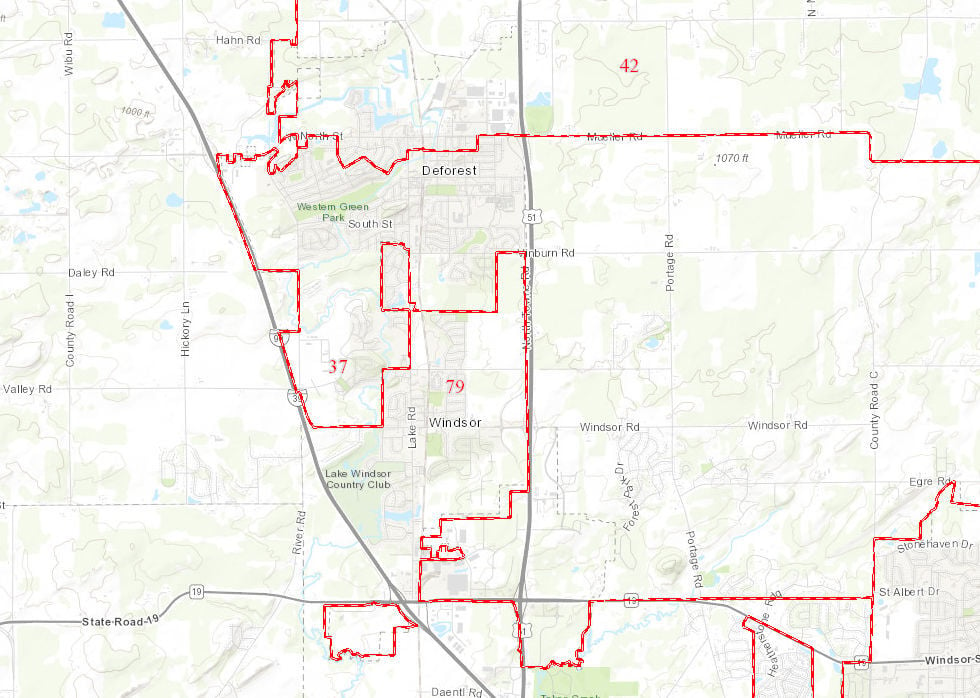 The past year has been a series of shattered political precedents in the United States and as we look toward once-in-a-decade redistricting, many are clinging to faith in the representation of democracy.

Residents of the 2nd and 6th Congressional Districts testified in two of a series of online hearings in February and in March, describing how gerrymandering has carved up counties and municipalities, making it more difficult for citizens to be heard and for local government to be recognized by the state.

The Peoples’ Maps Commission was created by executive order by Governor Tony Evers on Jan. 27, 2020 as a way to provide non-partisan options for the state legislature to move forward with redistricting, coinciding with the 2020 Census.

A Lodi woman, Patti Herman, described a sense that local issues have become irrelevant to state officials: “When I make the call or write an email, I feel a sense of hopelessness and helplessness, a feeling that my communication will go into a black hole and not get any attention.”

Bobbi Wilson, the policy and special projects coordinator for the Wisconsin Farmers’ Union, who testified on the 2nd Congressional District, explained in an interview that the issue has been front and center for her and the roughly 2,000 farmers statewide represented by the union.

“People feel like their representatives are not beholden to their constituents and that they’re just going to vote the way that they want to vote,” said Wilson, “because they know that they are safe and there will really be no repercussions in the next election if they go against the will of the majority of voters, because they have already locked in the results of those elections and they really only have to cater to extremes in their own districts in order to maintain their seat in the legislature.”

Wilson described farmers feeling frustrated at taking time away from their farms and their family to bring issues to their representatives in Madison, only to leave feeling as if the endeavor had been a waste of time. Among these issues have been initiatives to ensure clean groundwater and regulation of high-density livestock siting. As an alternative many farmers and other policy advocates are turning attention to local and county government as a more responsive source of representation.

In the process of redistricting following the 2010 Census, Wisconsin Republicans drew lines to shore up support for Republican held districts and to break up blocks of Democratic-voting areas to prevent them from having any electoral significance. The constitutionality of the process was questioned and argued in the U.S. Supreme Court in October 2017. Among the voters represented in the suit were James and Allison Seaton of Lodi.

As gerrymandering opponents point out, facts of the case were supported by the case proceeded through state and federal court before reaching the Supreme Court, where the justices did not take a side in the argument itself, but sent the case back on an argument of standing--who can legitimately claim provable harm in a case.

Historically, Wisconsin has had a track record of responsive, transparent state government, according to former state employee and League of Women Voters member Debra Byars, of Poynette, who moved to the state in part due to the quality of state government.

“When I worked in state government, and even after, there were different points of view and that’s what you would expect,” said Byars. “Generally the actions that were taken at the state level did represent a bipartisan approach on issues. That is not the case now. Most of the votes are strictly party-line and the people that supposedly represent us don’t represent us.”

The political dynamics of Wisconsin have changed to the point of breaking up previous norms of campaigning, according to Byars, who works with many League of Women Voters members who have organized forums, debates, and voter education efforts.

“Current elected officials running for re-election refuse to participate in debates,” said Byars. “They refuse to even respond to the questionnaires and that used to be a standard thing, that all politicians would complete the questionnaires to explain their positions, and they don’t even bother now.”

Wisconsin State Representative Dianne Hesselbein (D-Middleton) noted a difference prior to her election to the 79th Assembly District.

“When I was on the Dane County Board from 2008 to 2014, we did a great job of working across the aisle to get thing done,” said Hesselbein. “I worked with conservative Dave Wiganowski, I’ve worked with Denny O’Loughlin...on the local level there is a lot you can do working together and I wish I could see that on the state level.”

Working at the county level and with the Cross Plains Area School District, after 2010 Hesselbein noted more partisanship, which has lingered since and even increased. As partisanship has become more pervasive, the authority of municipalities has been diluted. The DeForest-Windsor area, Hesselbein pointed out, for example, is represented by three different state senators and three different representatives.

“So far the Republican Party has been clear,” said Hesselbein. “They are continuing to draw maps and I think they are drawing them in secret and they are hiring lawyers already. This is an extremely expensive process for the state of Wisconsin and it doesn’t have to be.”

Before 2010, when Democrats have been in control of the legislation, their party leaders have been tasked with redistricting and done so to a Democratic advantage.

“I don’t think that Evers or Fitzgerald or Voss or Jagler--I don’t think any of those guys should be drawing their political districts on either side,” said Stephen Ratzlaff, of DeForest, who is running for the 37th Assembly District as an independent candidate. “How hard is that to figure out? The drawing of the political districts should be taken out of the hands of politicians.”

Hesselbein is an author of a bill proposing a non-partisan redistricting in the model of Iowa, which places the task under the authority of a non-partisan advisory commission. She has pursued the issue with full knowledge that it would put her own seat at greater risk in the next election.

“I would welcome it,” said Hesselbein. “I’ve never shied away from having an opponent and I think it’s great when people have a choice, so I would absolutely love to do it.”

However, a non-partisan redistricting process does not necessarily need to be adopted from outside the state, according to Maureen McCarville, Dane County District 22 Supervisor, of DeForest.

“At the county level we have an independent group with the idea of keeping the gerrymandering out of it and try to keep it fair,” said McCarville, “keep the natural boundaries and keep communities together.”

However, as more citizens are depending upon local government to respond to their concerns, the authority of counties and municipalities is diluted by the same gerrymandering process. Among the testimony presented in the Peoples’ Maps Commission hearings, several current and former county officials described how district lines assigning multiple districts for one county, or in the case of DeForest, one municipality, made it more difficult for local government to lobby for issues, and funding, at the state level.

“If we have three different assembly districts and DeForest or Windsor wants to lobby a particular issue, how much clout do you have?” McCarville explained. “If there’s only one little neighborhood that is, say, in Plumer’s district and we want to lobby him, the political capital he would have to burn on an issue probably isn’t commensurate with the amount of people being represented in the area.”

Scheduled district hearings by the Peoples’ Maps Commission have been completed and now the group is soliciting recommendations for district arrangements through their website. The census data that will determine the changes, due to issues involving the COVID-19 pandemic, is not expected before September, which leaves little to no time for discussion of changes before nomination documents are distributed for the next election.

The process, as discussed by all those interviewed here, is assumed the same: that the Republican leadership in the state legislature will refuse to recognize and competing redistricting models, will insist on their own map, which will be vetoed by the governor, and will be decided by the courts.

“My concern is that with the Census not coming in until September, that it plays right into the Republican argument that there won’t be enough time,” said Madison civil rights attorney and League of Women Voters member Joan Schwarz. “I’m also concerned about the million dollars that the legislature allocated to hire a law firm at $30,000 a month now and $200,000 a month later, and the People’s Maps Commission can’t be in the budget.”

As of publication Rep. John Jagler and Rep. Jon Plumer have not responded to requests for comment.