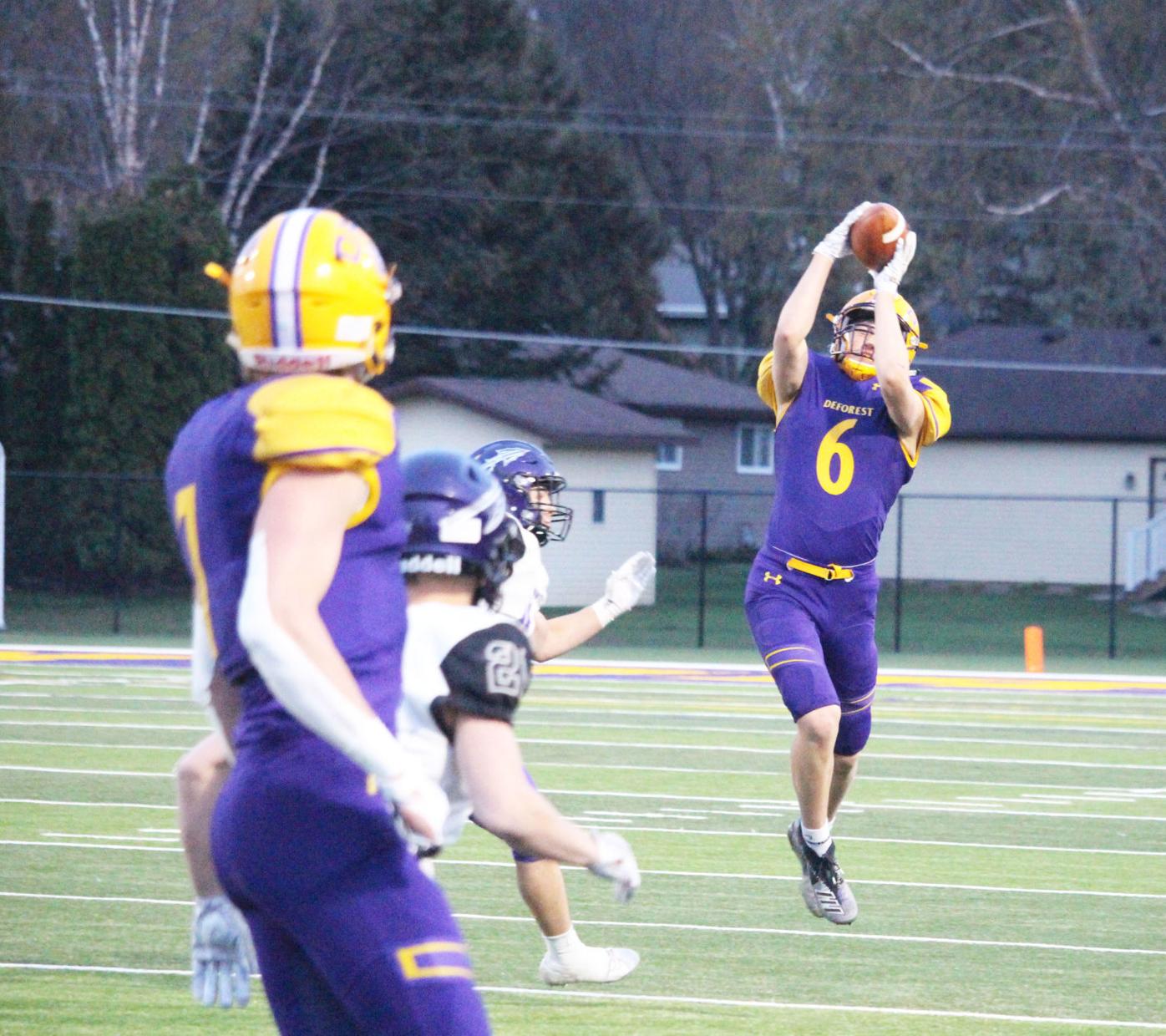 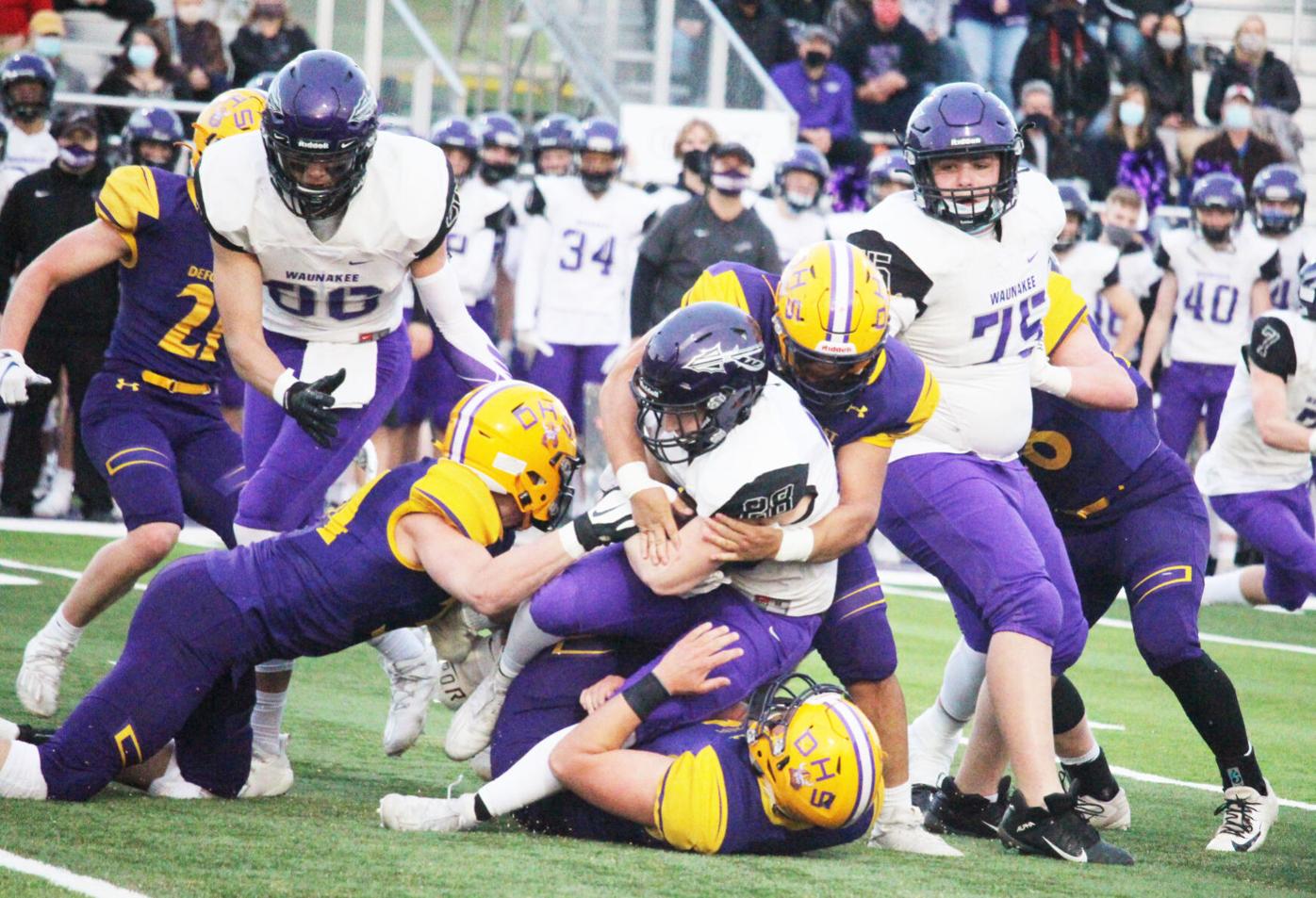 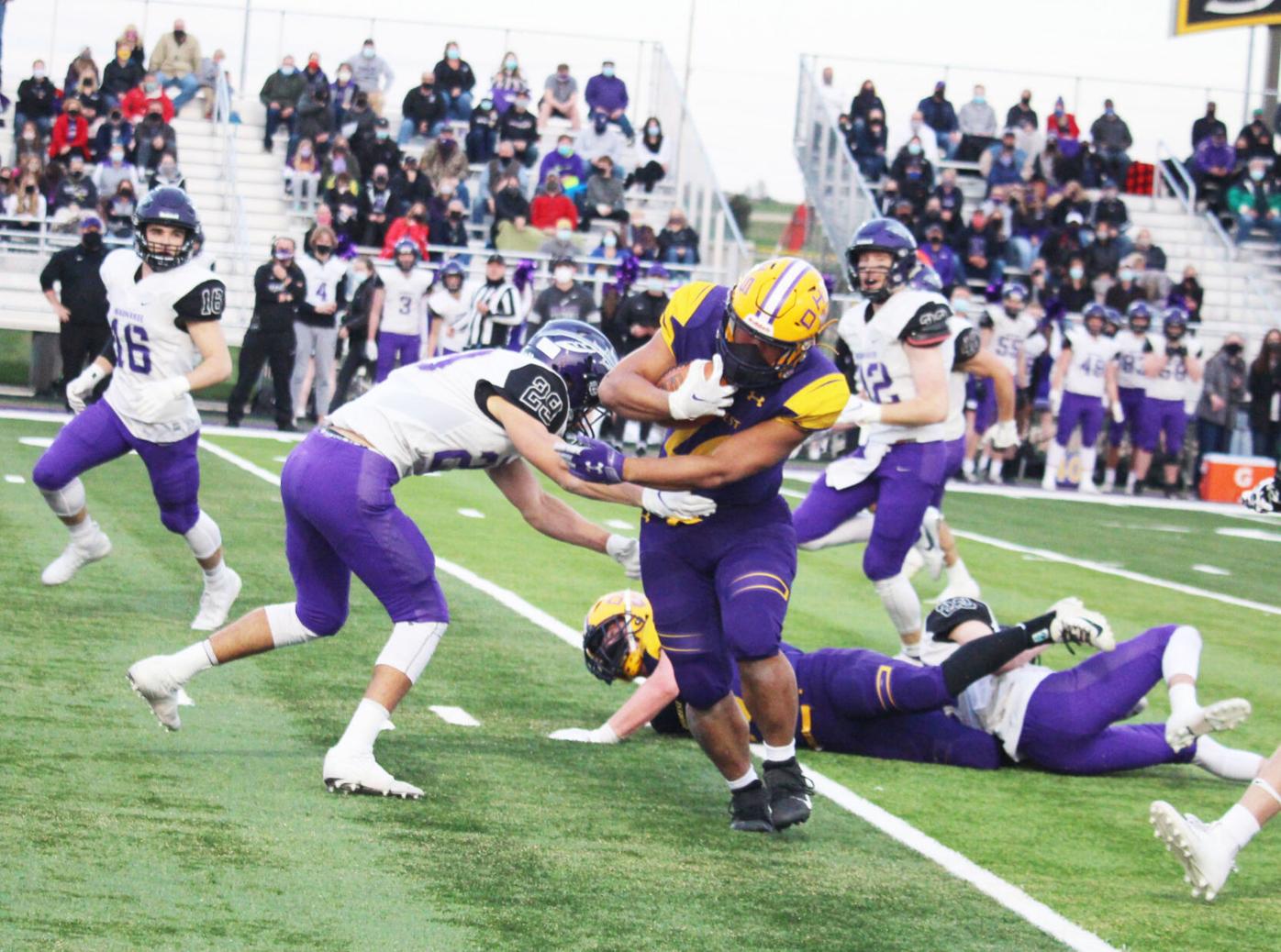 Senior Gabe Finley led DeForest with 121 yards rushing and a touchdown on 21 carries in last Friday’s loss to Waunakee. 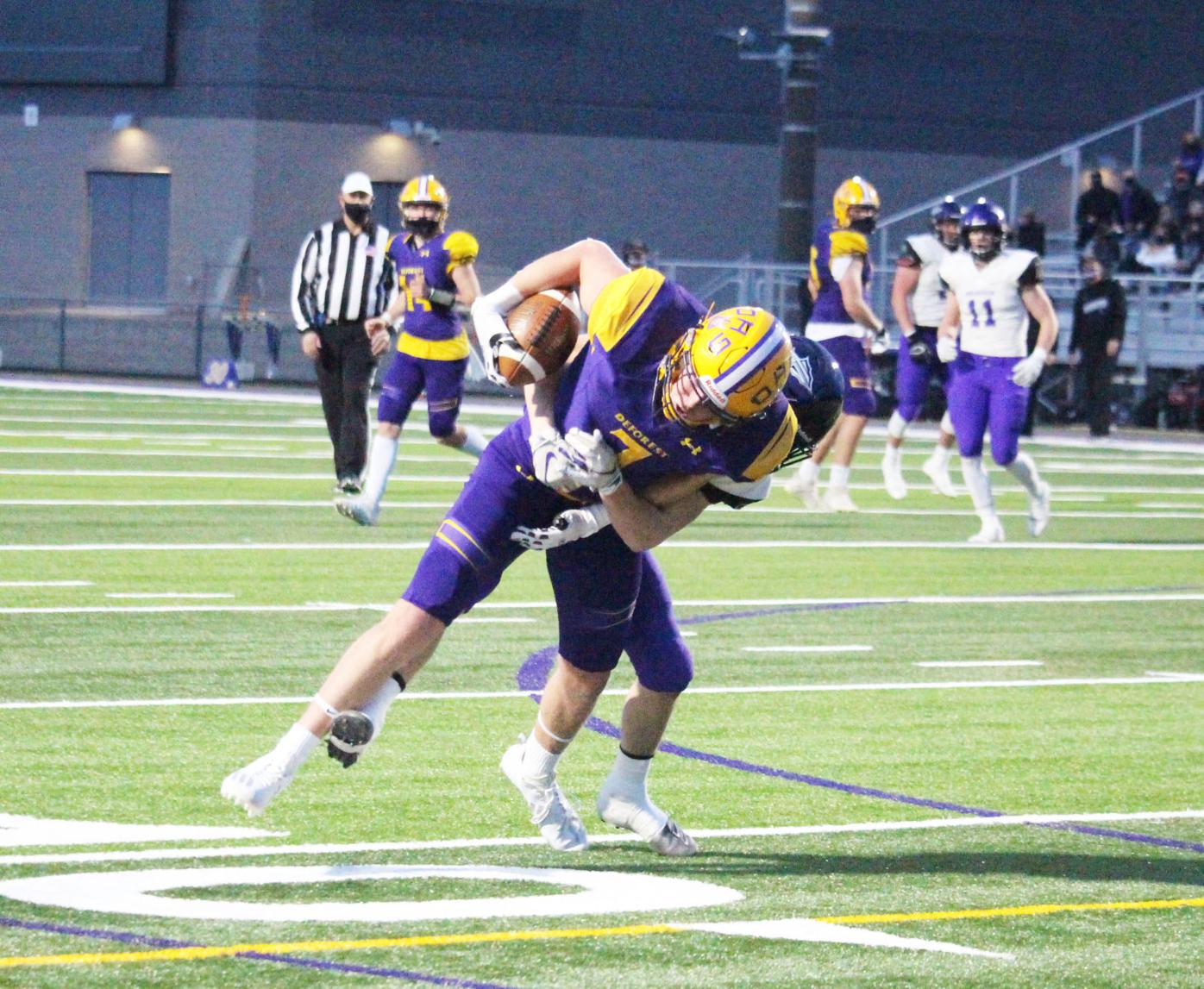 The Norskies’ Nolan Hawk tries to break free from a Waunakee defender.

Senior Gabe Finley led DeForest with 121 yards rushing and a touchdown on 21 carries in last Friday’s loss to Waunakee.

The Norskies’ Nolan Hawk tries to break free from a Waunakee defender.

The ongoing pandemic has forced a lot of changes in high school athletics, including football teams moving their seasons to the spring.

But, things looked a lot more normal when one of the most storied rivalries in Wisconsin high school football continued last Friday. Waunakee and DeForest locked horns in another classic battle.

The game had the feel of a pre-COVID game with a relatively large and raucous crowd fueling intense play on the field.

“It was a fun night,” first-year DeForest coach Aaron Mack said. “It was two good football teams going after it. I told the kids to look up in the stands because I thought we got back to a little bit of normalcy. It was nice to see the crowd for both communities”

For one half, the Warriors and Norskies treated the crowd to a back-and-forth masterpiece. But turnovers shifted all momentum to Waunakee in the second half and the Warriors parlayed it into a 48-30 victory.

“You can’t turn the ball over six times and expect to beat a good football team like that,” Mack said.

It was the final game of the alternate fall season for Waunakee. The Warriors finished a perfect 6-0.

DeForest fell to 5-1 with one game remaining on its schedule. The Norskies had their 19-game win streak come to an end.

The Norskies’ defense tied the game when Trace Grundahl returned an interception 32 yards for a touchdown less than two minutes later. Ty Tisch made the extra-point kick.

“I thought that was going to get us rolling,” Mack said.

DeForest took its first lead, 10-7, with 24 seconds remaining in the opening quarter after getting a 29-yard field goal from Tisch.

The Warriors briefly regained the lead, 14-10, with a 10-yard touchdown run by Caden Nelson and extra-point kick by Driscoll.

Waunakee answered on the ensuing kickoff, as Isaac Schaaf returned it 91 yards for a score. Driscoll had the extra-point kick.

The Norskies took their final lead, 24-21, after a 6-yard touchdown run by Gabe Finley and extra-point kick by Tisch with 2:57 remaining in the first half.

“We try to instill in the kids to keep battling and we did that in the first half,” Mack said. “We seemed to answer every time we had to. We had a great effort, but unfortunately we couldn’t match it with the result we wanted.

The Warriors regained the lead for good after Keene tossed a 15-yard touchdown pass to Nelson. Driscoll put Waunakee up 28-24 with 1:20 left in the half after hitting his fourth extra-point kick of the half.

Momentum shifted clearly to the Warriors after DeForest fumbled the ball away on the second play of the second half.

After the takeaway, Waunakee got a 5-yard scoring run from Keene. Driscoll had the extra-point kick to increase the lead to 35-24.

The Norskies fumbled on the ensuing kickoff and it turned into a 39-yard field goal for Driscoll.

“We obviously didn’t put our best foot forward in the second half and that is on me to get our kids ready to play,” Mack said.

Driscoll followed it up with a 30-yard field go to increase the lead to 41-24.

DeForest capped off its scoring with a 30-yard touchdown pass from Keyes to Nolan Hawk. The extra-point kick was no good.

Waunakee closed out its scoring with 50 seconds remaining in the third quarter, as Keene threw a 24-yard touchdown pass to Keller. Driscoll had the extra-point kick.

The Norskies had six turnovers in the game, including four fumbles. The Warriors had three turnovers.

Keene finished the game 19-of-31 passing for 241 yards, three touchdowns and three interceptions, while Nelson led the rushing attack with 89 yards and a touchdown on 26 carries.

Sam Lorenz recovered two fumbles for Waunakee’s defense, while Tommy Raemisch and Coltn Healy had one each. Caden McCurdy had two interceptions.

Keyes finished the game 13-of-28 passing for 269 yards, two touchdowns and two interceptions.

Finley led DeForest’s rushing game with 121 yards and a touchdown on 21 carries.

Weisbrod had four catches for 124 yards and a touchdown, while Deven Magli added five catches for 94 yards.

Grundahl, Timothy Frederickson and Kase Reierson each had an interception for the Norskies.

DeForest will close out the regular season this Friday at 7 p.m. at home against Menasha. The Norskies defeated Menasha 8-7 in the 2019 WIAA Division 3 state championship game.

“We owe it to our seniors to put everything on the line one last time,” Mack said.