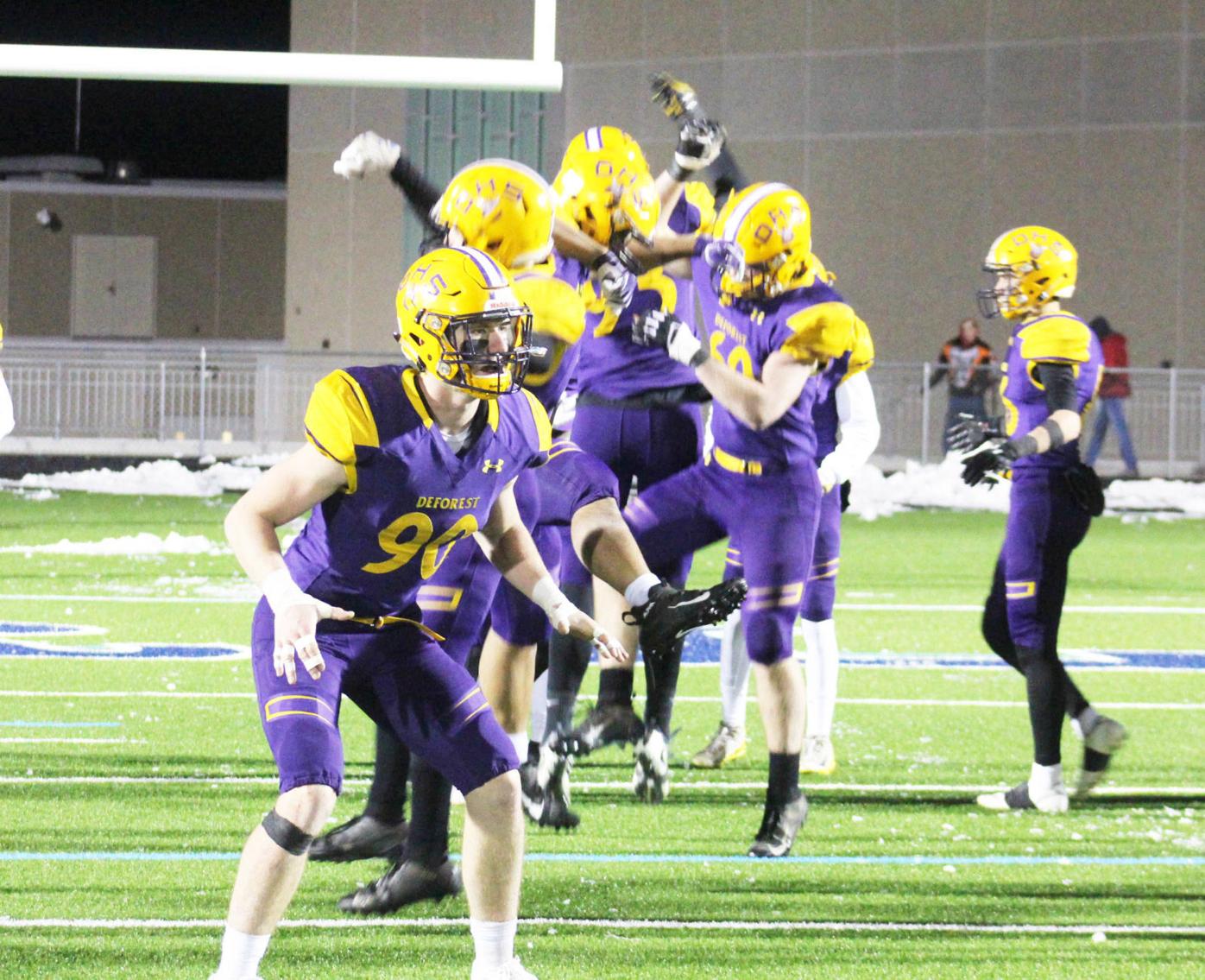 The Norskies celebrate after knocking off Monroe 52-14 in a WIAA Division 3 Level 3 playoff game in McFarland last Friday. 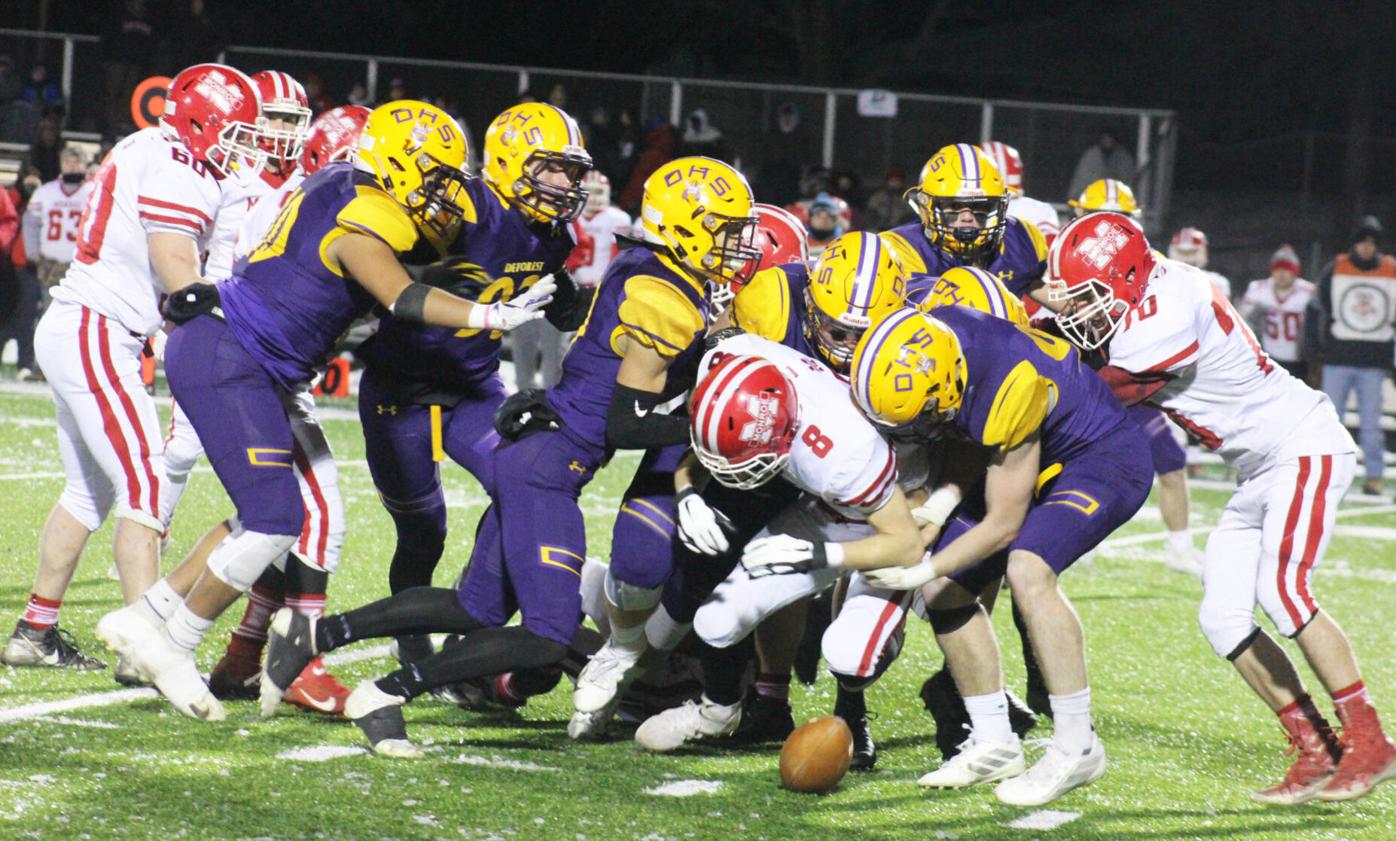 DeForest’s defense rips the ball away from Monroe’s Trevor Rodebaugh.

The Norskies celebrate after knocking off Monroe 52-14 in a WIAA Division 3 Level 3 playoff game in McFarland last Friday.

DeForest’s defense rips the ball away from Monroe’s Trevor Rodebaugh.

For one of the first times this season, the DeForest prep football team faced adversity in their WIAA Division 3 Level 3 playoff game against Monroe in McFarland last Friday. The undefeated Norskies were on their heels as they trailed 14-7 with five minutes to go in the first half.

We are really proud of our kid’s resiliency,” DeForest coach Mike Minick said. “You are not always going to be in the position you want to be in. You are going to have to fight through some things and they did that tonight.”

DeForest responded in a big way. The Norskies ran off 45 unanswered points to blow away the Cheesemakers 52-14.

“They came out and punched us and we faced some adversity, but we bounced back and put it all together,” Norski offensive lineman Jack Thennes said.

The Norskies are now one win away from playing at Camp Randall Stadium for a state title. They improved to 12-0 overall.

“It is the best feeling in the world, but the Final Four is just the next step for us completing our ultimate goal,” Norski receiver Lane Larson said. “I love this group of guys. When you do it with the people you love and the people you have been with since the fourth grade, there is nothing better.”

The Norskies will play New Berlin Eisenhower (11-1) in a state semifinal game this Friday at 7 p.m. in Slinger.

“In the next game, we are playing to play at Camp Randall and that is all the motivation we need,” DeForest quarterback Trey Schroeder said.

Eisenhower advanced on Friday with a 13-12 win over Plymouth.

DeForest, which has outscored its three playoff opponents 121-21, will play in the state semifinals for the first time since 2007, which is the last time the Norskies played in the state title game.

“These guys aren’t done yet,” Minick said. “We are fortunate to be playing another ball game. We are going to go back to work on Monday and try to extend the season.”

Menomonie and Menasha will play in the other Division 3 semifinal game on Friday.

Last Friday’s win came down to big plays. The Norskies had six touchdowns 35-yards or longer.

With the quick strikes, DeForest only ran 32 offensive plays, while Monroe ran 69.

The Norskies finished with 351 yards of offense, which included 320 on the ground.

“We were very good up front,” Minick said. “We had some nice holes and the backs were able to get through untouched on some of the runs.”

Gabe Finley led the way for DeForest with 142 yards rushing and three touchdowns on 142 yards.

The Norskies’ Alex Endres only had three carries, but racked up 100 yards and two touchdowns.

“I have to give thanks to the offensive line,” Endres said. “They were exceptional.”

DeForest quarterback Trey Schroeder added 47 yards and a touchdown on eight carries. He was also 3-of-6 passing for 31 yards.

Finley went to work right away. On DeForest’s third play off the game, he busted loose for a 35-yard touchdown run.

However, Monroe responded with a nearly 10-minute drive to tie the game on a 4-yard touchdown pass from Max Golembiewski to Nick Bansley.

After DeForest had a 46-yard touchdown run by Finley called back due to a penalty, the Cheesemakers got the ball back and put together another impressive drive.

Monroe capped off a 79-yard scoring drive with a 1-yard touchdown run by Bansley to go up 14-7 with five minutes to go in the first half.

The lead did not last long, as Endres raced 56 yards for a touchdown two plays into the ensuing drive to tie the game.

DeForest regained the lead for good with 11 seconds remaining in the first half with a 3-yard scoring run by Schroeder.

The Norskies continued to gain momentum to open the second half. On the second play of the third quarter, Endres sprinted 40 yards to the end zone. DeForest missed the extra-point kick, but still led 27-14.

“We were on the sideline for a good portion of the game because we were scoring so quickly,” Schroeder said. “There were a lot of big plays.”

DeForest’s defense got into the scoring act with a 70-yard interception return by Trace Grundahl.

“My guy didn’t move so I just sat there and waited for it,” Grundahl said. “I usually don’t follow my blockers after an interception, but I did this time. It is amazing to be able to contribute to a win like this.”

Then after a long punt return by Deven Magli, Lane Larson ran the ball in from 10 yards out on an end-around to put DeForest up 39-14.

Finley closed out the scoring with touchdown runs of 49 and 43 yards.

Monroe finished the game with 241 yards of offense. They had 196 rushing.

Cole Yocum had a team-high two tackles for loss for DeForest, while Magli, Blevins and Jett Riese had one each.

Jagger Lokken had four extra-point kicks for the Norskies.