The DeForest boys cross country team competed at the WIAA state meet for the first time since 1999 this fall. 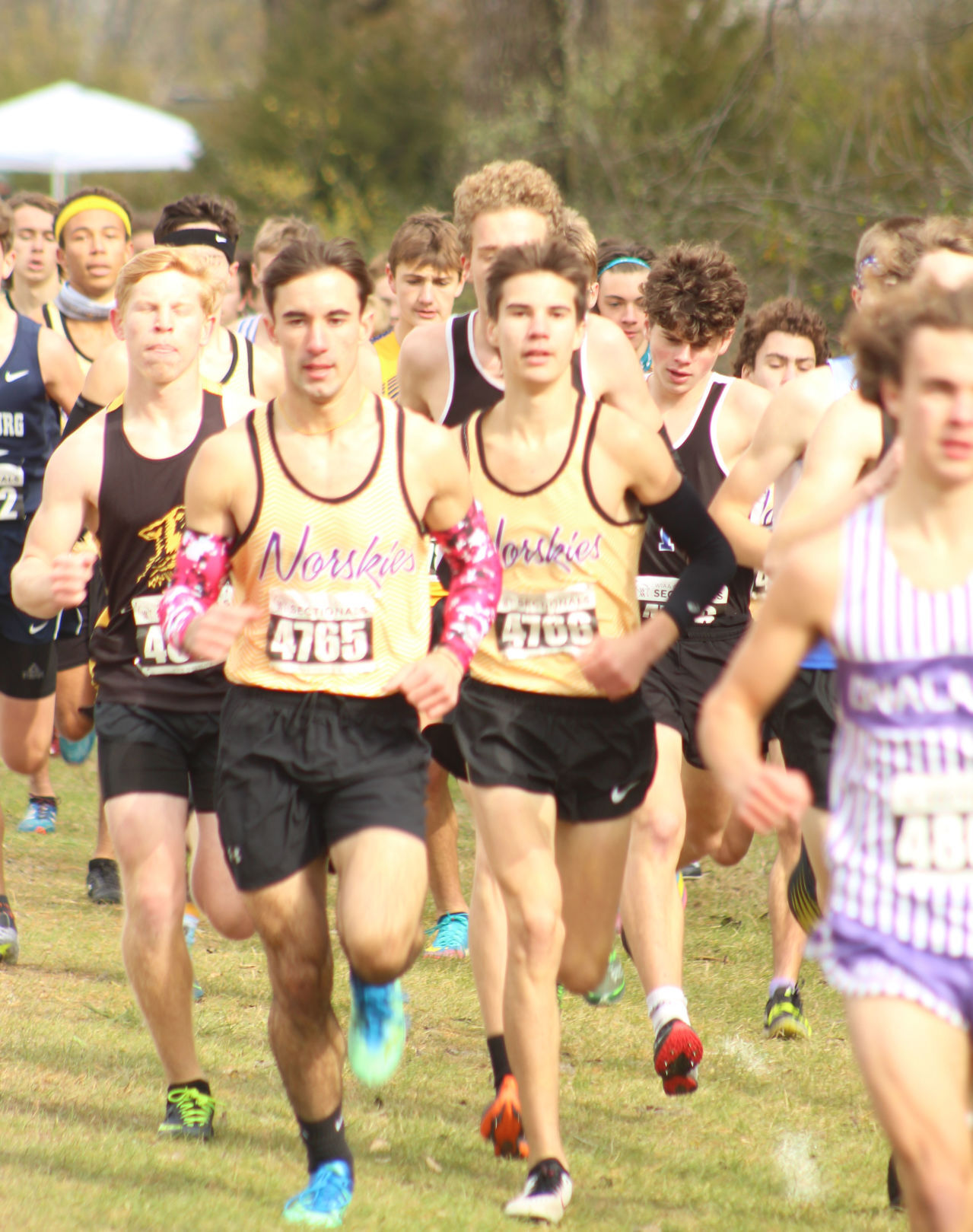 Brothers Isaiah and Elijah Bauer led the DeForest boys in most of the races this fall.

The DeForest boys cross country team competed at the WIAA state meet for the first time since 1999 this fall.

Brothers Isaiah and Elijah Bauer led the DeForest boys in most of the races this fall.

The 2020 season is not one DeForest boys cross country coach Joe Parker will soon forget. The Norskies not only navigated through a season during a pandemic, but achieved success not seen in years.

“This season was, in one single word, memorable,” Parker said. “Whether you base it off of the circumstances or the success, I will, and I am sure all the guys will remember this season for quite a while.”

After going through the summer not knowing if there would be a season this fall, the Norskies were happy to get a chance to compete.

“What I will remember most about this season is the guys’ excitement just to be around each other,” Parker said. “This group grew to realize what extracurricular and school in general offers for their mental health. It was nice to see them appreciate the in-person, face-to-face interaction the season allowed.”

Making it through a season with a pandemic was not easy. Due to protocols and restrictions, the format of races was changed and most invites were canceled.

“Probably the most difficult piece was the planning of races and practices,” Parker said. “We were fortunate with the weather most days because if we were hit with any tough conditions, going inside was not an option. We were also limited with travel for practices. Having your entire schedule erased the week before practice provided a stress that I had not ever dealt with. While competition was a secondary piece this year, it still gave the guys a focus point for workouts and goal setting. Those two items are cornerstones of our sport and are difficult to replace if they are removed entirely. I would say the biggest stress itself though was the day-in and day-out uncertainty. Wanting to do right is a difficult thing to do with some many unknowns and different views on what is the right thing to do. Deep down, I am thrilled to have been able to help provide our kids with an opportunity to be safe and social and give them a small sense of normalcy.”

Deforest opened the season by recording 27 points at the Watertown Triangular to finish ahead of both Watertown (46) and Pius XI (59).

In their first home meet, the Norskies had 15 points, while visiting Reedsburg had an incomplete team.

At the Deerfield/Cambridge Quadrangular, DeForest tallied 42 points to place second behind Shorewood (29).

In their final meet at the Windsor Sports Complex, the Norskies recorded a score of 24 to finish well ahead of Sauk Prairie (45), Edgewood (62) and Beaver Dam (115).

DeForest closed out the regular season by hosting a meet at Wyona Park in Wyocena. They claimed first place with 25 team points, followed by Deerfield/Cambridge (44), Poynette (65) and Portage (102).

The Norskies then hosted a WIAA Division 1 subsectional and Isaiah Bauer, Elijah Bauer, Caleb Ekezie, Korbin Eisler, Jackson Grabowski, Matthew Vander Meer and Ferris Wolf teamed up to win a title. They came away with 54 team points to finish well ahead of second-place Dodgeville (79).

The momentum carried over into the Portage Sectional. DeForest claimed the title by two points, 37-39, over Onalaska to earn their first team trip to state since 1999.

“As a coach, the biggest highlight was being able to provide a safe environment for the guys to get together, be active and improve,” Parker said. “Twenty of the 26 competing guys ran lifetime bests this season. As a competitive person, obviously the programs fourth trip to the state meet was a highlight. We certainly recognize the circumstances that allowed us to get there, but I would point to each of our runner’s personal improvement as a major contributor to that achievement.”

At the state meet at Arrowhead High School, the Norskies finished in 11th place with 233 points.

“It is a great group of guys who have welcomed new runners with open arms,” Parker said. “Many of them have grown to appreciate the sport for what it can offer them beyond the race days. I hope to see that carry on well past their high school days.”

With Wolf being the only varsity runner who has to be replace next season, the Norskies have the makings of another special season in 2021.

“The returning group of runners will provide our team with another tough nucleus to build around,” Parker said. “I would hope we will be contending for a conference title in the new Badger East and depending on what other teams have, maybe a shot at another state meet.”