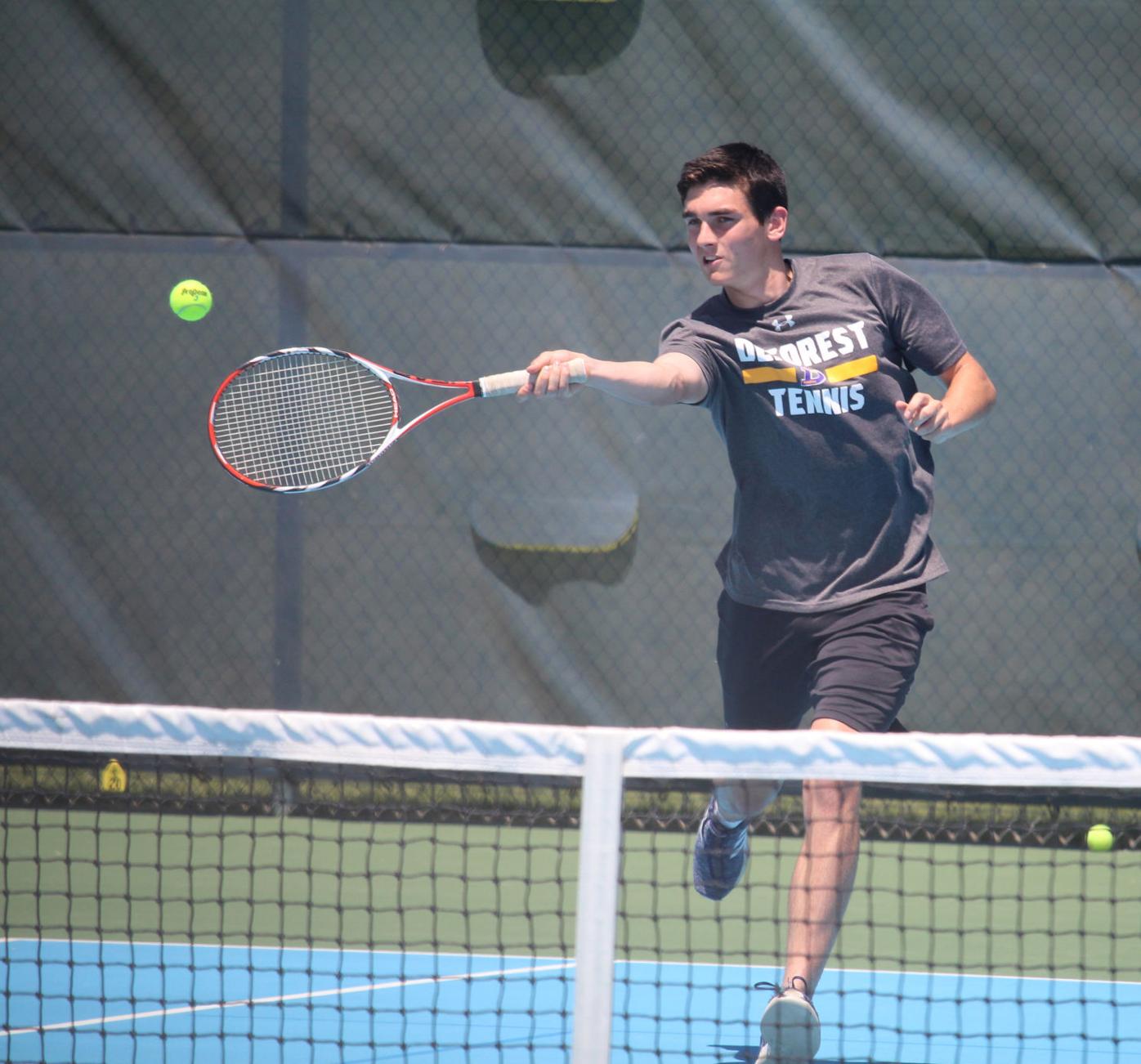 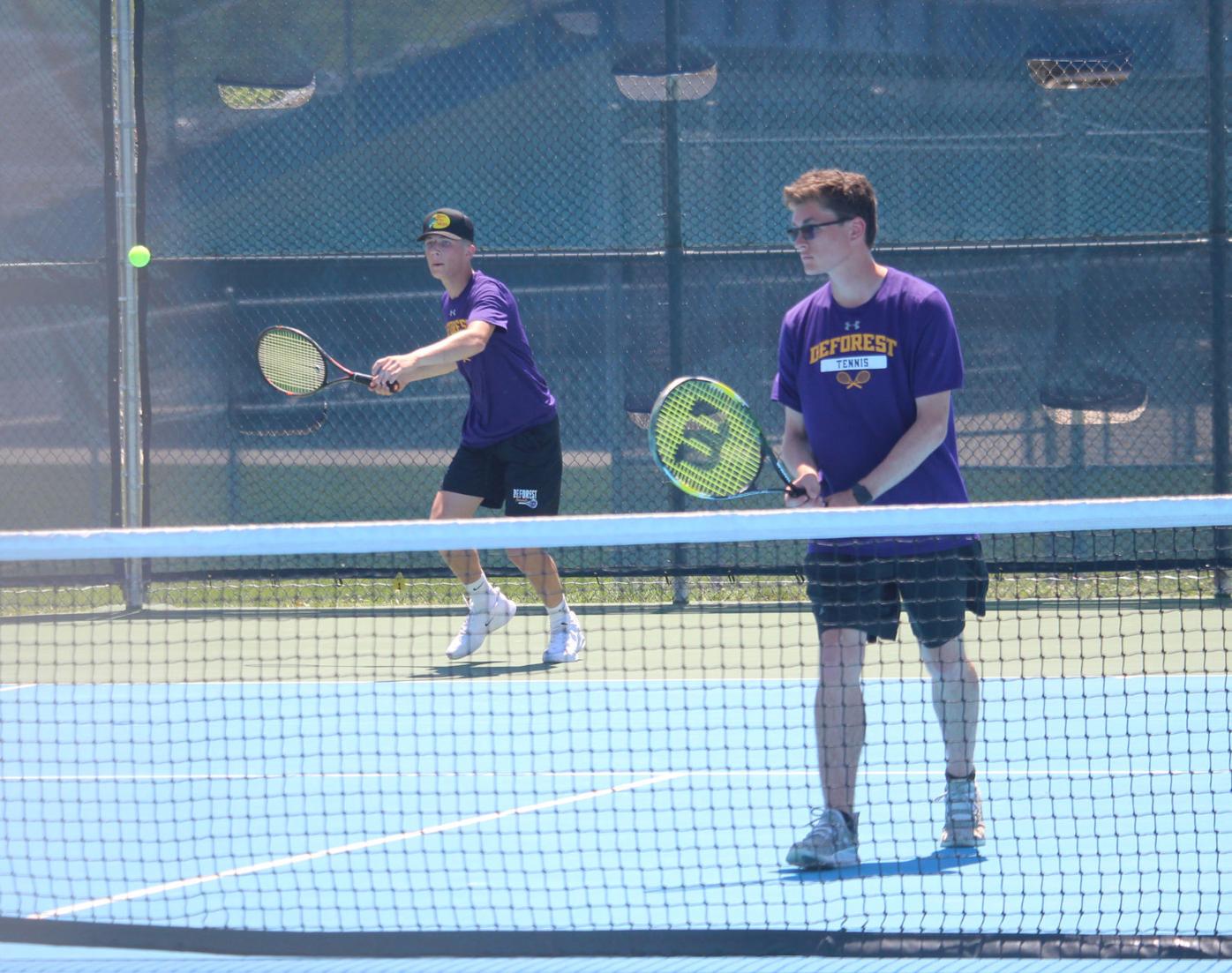 The Norskies' No. 1 doubles team of Dominic Caracci and Dominic Morand-Rivers placed fourth at the Badger North Conference Tournament.

The Norskies' No. 1 doubles team of Dominic Caracci and Dominic Morand-Rivers placed fourth at the Badger North Conference Tournament.

The DeForest boys tennis team came away with fifth place at the Badger North Conference Tournament in Baraboo last Friday.

The Norskies finished with nine points to tie Baraboo for fifth place.

The Norskies were led by No. 3 singles player Aiden McCloskey. He matched his seed number by placing second.

McCloskey opened the tournament with a 6-2, 6-0 victory over Baraboo’s Micah McReynolds and then he downed Sauk Prairie’s Daniel Johnson 6-3, 3-6, 10-3 in the semifinals.

McCloskey ran out of luck in the championship match against top-seeded Levi Christian of Waunakee. Christian came away with a shutout 6-0, 6-0.

Nathan Xiong was the only other Norski singles player to place. The No. 4 player worked his way to third place.

Xiong easily took care of Sauk Prairie’s Brody Wolfe 6-3, 6-0 in the opening round before losing 6-4, 3-6, 10-6 to Portage’s Kyle Kinzler in the semifinals. He closed the day by beating Reedsburg’s Brogan Helmeid 6-1, 6-1 in the third-place match.

DeForest’s No. 1 singles player Eddy Sommers was knocked out in the first round by No. 2 seeded Anthony Buss of Reedsburg 6-2, 6-1.

Dominic Caracci and Dominic Morand-Rivers had the only doubles win for DeForest. The No. 1 duo finished in fourth place.

Caracci and Morand-Rivers got going with a upsetting third-seeded Quentin Schroeder and Jared Tews of Beaver Dam 6-3, 6-4, but fell 6-1, 6-1 to Baraboo’s Owen Nachtigal and Campbell Koeser in the semifinals. The Norski tandem then dropped a 6-3, 6-0 decision to Reedsburg’s Alex Woodruff and Corbin Ellifson in the third-place match.

DeForest’s No. 2 doubles team of Nolan McCann and Michael Szudor lost 6-2, 6-0 to third-seeded Carson Brinkmeier and Jade Hilden of Sauk Prairie in the first round.

The Norskies’ No. 3 tandem of Trey Christianson and Dominic Jaccard fell 6-0, 6-0 to third-seeded Dayne Meinhardt and Tyler Singletary of Reedsburg in the opening round.

The Norskies competed in the WIAA Division 1 Baraboo Subsectional earlier this week. A recap will be in next week’s Times-Tribune.

The Oconomowoc Sectional is set for 9 a.m. on June 9.