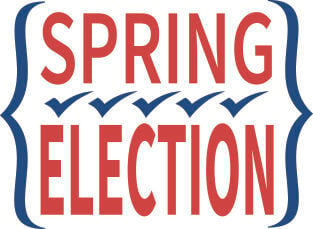 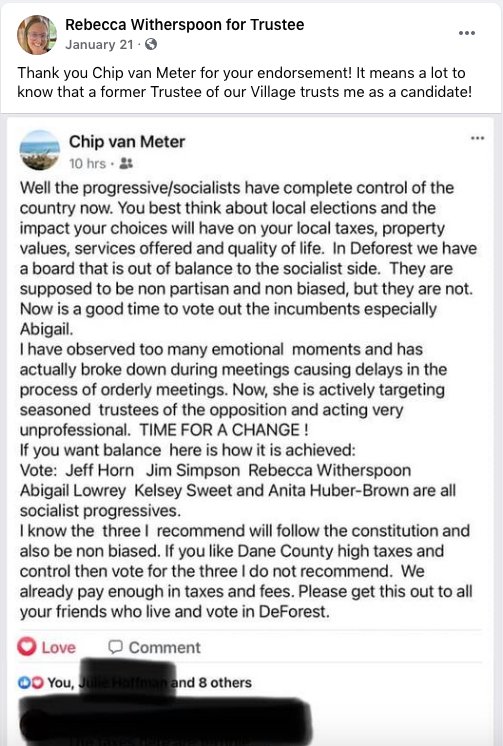 Village Board Candidate Rebecca Witherspoon posted a screenshot image of an endorsement from former board member Chip van Meter, though she has distanced herself from van Meter's more detailed arguments in the post.

Village Board Candidate Rebecca Witherspoon posted a screenshot image of an endorsement from former board member Chip van Meter, though she has distanced herself from van Meter's more detailed arguments in the post.

Local elections are designed as non-partisan affairs, but that has been different this year as national political trends have found their way into the races for school and village board.

The DeForest Times-Tribune received an email from a DeForest resident suggesting that DeForest Village Trustee Abigail Lowery, who is running for re-election on April 6, should be investigated for libel against DeForest Area Board of Education candidate Megan Taylor.

The complaint originated, as shared in a link in the email, from an online exchange in which Lowery posted on Taylor’s campaign Facebook page, asking Taylor’s position on communicating with area residents and families outside of meetings. A thread followed between the two in which Taylor explained her position that open communication with the public would be a priority for her and that she would have a policy of returning messages within 24 to 48 hours.

At the end of the Facebook conversation Lowery said she appreciated Taylor's position on the matter and ended: “For full transparency, I (just tonight) learned of your association with two very concerning, extremist individuals, so I will not vote for you. I appreciate your time in answering questions though.”

In an interview, Taylor described the issue as “probably indirect slander,” explaining that she created the page for her campaign and necessary dialog with potential voters: “There have been people who have said: ‘Well, you’re associated with extremists.’ And I have no idea who that would be or what it would be. I’ve got friends that are Democrat and Republican, friends who are really conservative and friends who are really liberal. I know a lot of people and that doesn’t change my stance on things. And so they were quick to judge me.”

A potentially divisive interaction in Taylor’s campaign has been her appearance on the Vicki McKenna show with WISN 1130AM at the end of December.

“Yes, I did talk to the Vicki McKenna show and she was asking questions about back-to-school and so I was telling her about what was going on in our district,” said Taylor.

Taylor insists that her appearance on McKenna’s program does not constitute a blanket endorsement of McKenna’s work.

“She’s a shock jock and she’s a shock jock on the conservative side, but that doesn’t mean how I am,” said Taylor. “I’m very much in the middle. I’m not somebody who is very conservative, I’m not somebody who is very liberal. I’m right in the middle and that’s where I stand and honestly, I don’t think the school board should be political. There is not a place for politics in our school board—it should not be there.”

Taylor was a call-in guest to the Dec. 23 show to discuss the DeForest Area School District's program, describing the hybrid-virtual system at the time as "glorified babysitting."

"It has not gotten the final stamp from the board of education and we are fighting that it not get approved," Taylor told McKenna, insisting that students needed to be back in school full time five days a week, going on to highlight the reduced risk of COVID among younger populations.

"What are the parents in DeForest trying to do?" asked McKenna. "It's bad enough that they have these kids walking around in a funhouse mirror with masks on when they're not going to die from COVID?"

"Our goal is to not have this plan approved and to go back to the administration and tell them that they need to do better, and they need to support our kids," said Taylor, who went on to promote the DeForest Area Bring Kids Back to School Facebook group. "This has really driven me to run for our school board, because we are failing these kids."

National politics have similarly found their way into the DeForest Village Board race. When asked if the trustee position is non-partisan, candidate Rebecca Witherspoon answered an unequivocal, “Yes, it is.”

When asked if she brings any political affiliation, she responded, “No, it’s a non-partisan position. It doesn’t matter what my party is or isn’t, I’m representing the people of our village.”

On her campaign Facebook page, Witherspoon, on Jan. 21, shared an endorsement from former trustee Chip van Meter, commenting, “Thank you Chip van Meter for your endorsement! It means a lot to know that a former Trustee of our Village trusts me as a candidate.”

The endorsement, shared as a screenshot image, reads: “Well the progressive/socialists have complete control of the country now. You best think about local elections and the impact your choices will have on your local taxes, property values, services offered and quality of life. In DeForest we have a board that is out of balance on the socialist side…Now is a good time to vote out the incumbents especially Abigail.”

Van Meter goes on to claim that he has seen Lowery in “too many emotional moments and has actually broke down during meetings causing delays in the process of orderly meetings.”

Sweet does not have a specific political affiliation, she said, responding to the post.

“I guess I lean a little more to the left if people want to talk about that,” said Sweet, “but it is village board, so we shouldn’t even be talking about politics. It’s supposed to be non-partisan and we’re supposed to be voting based on what the community wants.”

Last year Lowery ran for the Wisconsin Assembly as a Democrat, but that, she explained, is a function of needing party support to win a partisan state office, with third-party or independent races usually running with a political objective aside from taking office. Serving in a local office is a different matter, she explained “I have different hats that I wear, like a lot of people,” with local politics being a matter of essential services, parks and other issues separate from party philosophy. For that reason, she said, she has specifically declined Democratic Party support or endorsement in her running for village board.

“I’m definitely not a socialist, and Chip van Meter has said untrue, mean things like that in the past,” said Lowery, going on to suppose van Meter was referring to one particular meeting. “I was strongly advocating for something that was important to me--and this was like two years ago, so I can’t remember all of the detail--I remember I left the room because I didn’t want to disrupt the meeting.”

While out of the room getting a tissue and a drink of water, she said another board member came out to talk to her, she said she was fine and said the trustee should go back into the meeting, at which point the other board member said the Village President decided it was a proper time for a five-minute break.

“I wouldn’t say it happens a lot, but occasionally people have to leave the room, they’re gone for a couple minutes and then they come back in,” said Lowery. “And I’m not going to apologize that I cared that much about something that was happening at a village board meeting.”

Witherspoon distanced herself from the details of van Meter’s endorsement when asked about the other points in it that can still be read on her Facebook page.

“I can’t speak to what he said, I’m not him,” said Witherspoon. “I may have shared it at some point in time.”

Witherspoon did not disavow the content itself, going on to say: “They are part of the progressive movement here in DeForest and Dane County. That’s well known. That’s not a statement that is untrue.”

The next term of the DeForest Area School Board of Education and DeForest Village Board will be decided in the spring election on April 6.