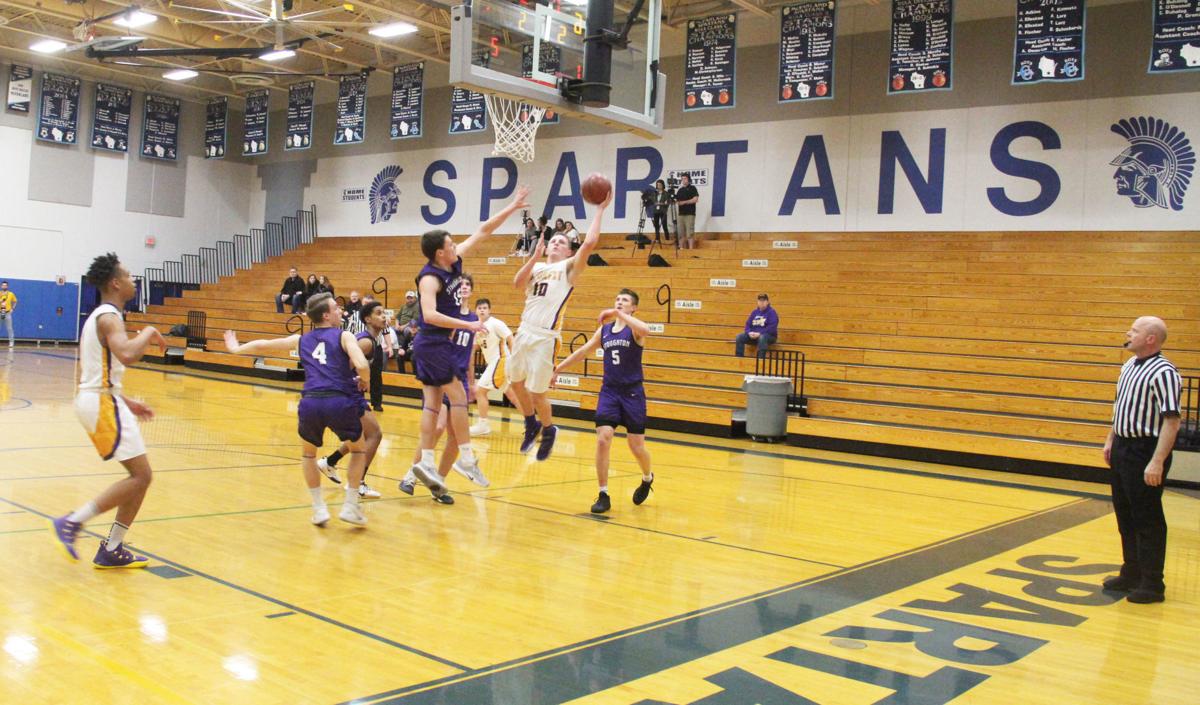 With the stands nearly empty at last week’s WIAA Division 2 sectional semifinal in McFarland, DeForest’s Trey Schroeder goes up for a layup against Stoughton. The Norskies nocked off the Vikings 66-57, but the WIAA canceled the rest of the tournament hours later due to the COVID-19 pandemic. 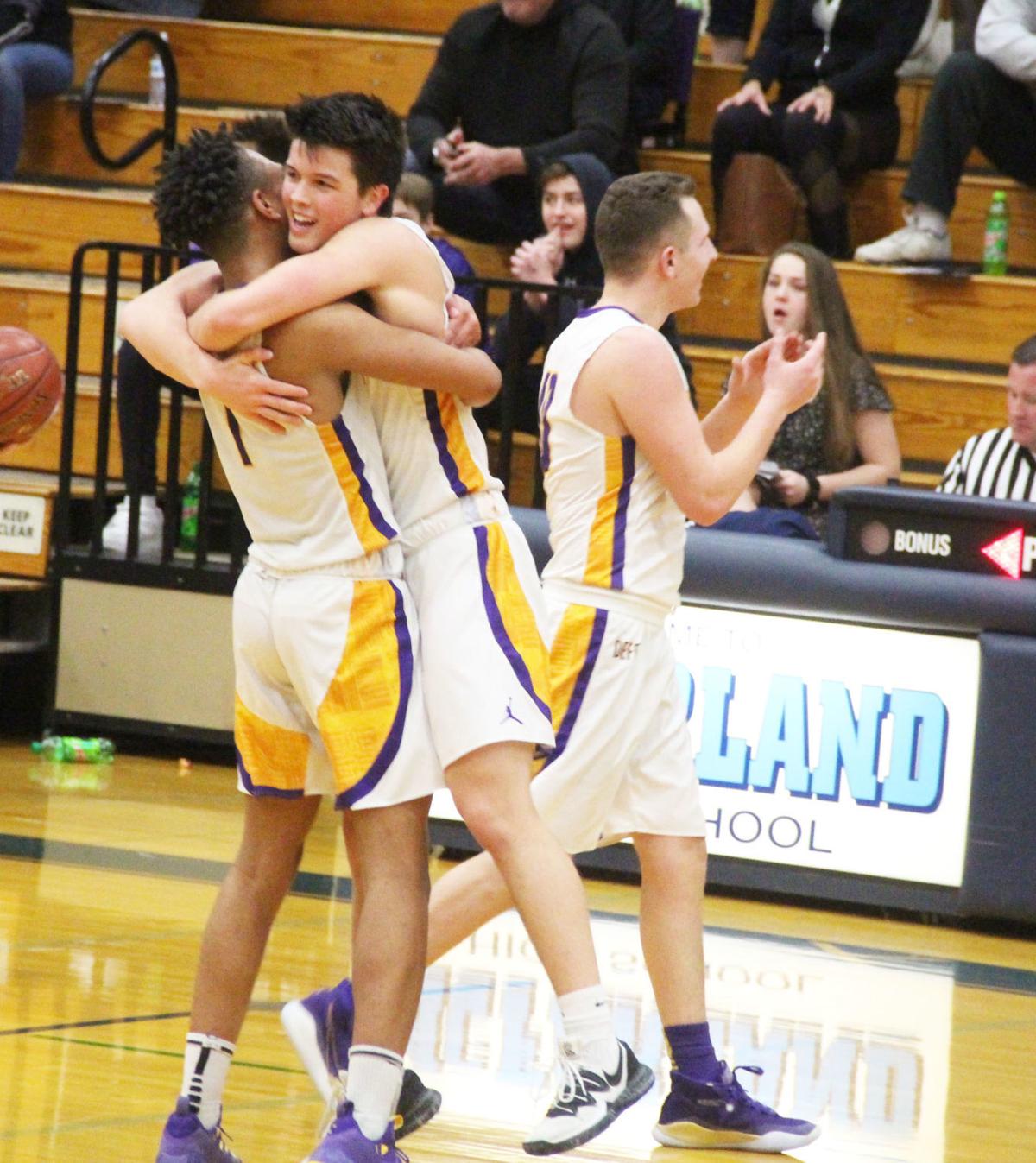 With the stands nearly empty at last week’s WIAA Division 2 sectional semifinal in McFarland, DeForest’s Trey Schroeder goes up for a layup against Stoughton. The Norskies nocked off the Vikings 66-57, but the WIAA canceled the rest of the tournament hours later due to the COVID-19 pandemic.

After putting together its best performance of the season and earning one of the biggest wins in program history, the DeForest boys basketball team had its magical season come to an end when the WIAA canceled the rest of the postseason tournament due to the COVID-19 pandemic.

The rest of the season was canceled just hours after the Norskies defeated top-seeded Stoughton 66-57 in a Division 2 sectional semifinal in front of a small crowd of only family members in McFarland on March 12.

“We were looking forward to a crazy environment, because the whole school would have been there normally,” DeForest sophomore Max Weisbrod said. “But, there was nothing we could do about it, so we just went out and played hard.”

Norski coach Craig Weisbrod was impressed with the focus of his team due to all of the circumstances surrounding the game.

“We were really ready to play,” Weisbrod said. “We earned the right to play in the sectional final and the guys deserved it. I thought there were a lot of contributions from a bunch of different kids. Lets not forget about our scout team, because they did a great job of getting us ready to play against the intricate offense Stoughton runs. They did an outstanding job of preparing us.”

It is DeForest’s first sectional win since 2012, when the Norskies earned their only state tournament berth.

“This has all been crazy,” Norski senior Trey Schroeder said. “It is like we were in a dream. It doesn’t feel real. But we had a basketball game and it didn’t matter who was going to be there. We had a job to do.”

“It is tough to think about it, but we are hoping for the best,” Schroeder said about the possibility of the sectional semifinal being his last high school game prior to the WIAA officially stopping the season.

DeForest won its final six games of the season to finish 19-6.

The Norskies led for almost the entire sectional semifinal. DeForest trailed just once after the Vikings scored the first basket of the game. The Norskies followed the opening basket with six straight points to take control.

“At first it was really weird to be out there with such a small crowd, but coach told us to lock in and play our game,” Norski senior Jahyl Bonds said.

The Norskies went up 22-13 with 6 minutes, 4 seconds remaining in the first half after a basket in the paint by Schroeder.

DeForest scored the final 12 points of the first half and led 34-20 at halftime. Deven Magli had two three-pointers during the run.

The Norskies got a three-pointer from Schroeder early in the second half to go up 37-22.

Hobson got the Vikings back in the game with 11 unanswered points to trim the deficit to 53-50 with 4:52 remaining.

However, DeForest closed the game on a 13-7 run. Bonds and Weisbrod both had four points in the final spurt.

Bonds had one of his best games of the season. He finished with a team-high 16 points.

“Jahyl Bonds has been great in the playoffs,” Craig Weisbrod said.

Weisbrod and Schroeder both finished with 15 points, while Magli chipped in 12.

Nolan Hawk contributed a team-best five rebounds, while Schroeder and Weisbrod had four each.

Hobson had a huge game for Stoughton. He led all scorers with 41 points, thanks in part to six three-pointers.

“I didn’t think we played bad defense on Hobson, but he went off,” Craig Weisbrod said.

The rest of the Vikings combined for just 16 points.

“Hobson went crazy,” Schroeder said. “He is a really good player. But, we limited everyone else and that helped us win.”

“It has been an amazing ride with these guys,” Bonds said. “I love these guys to death. They are like family to me.”