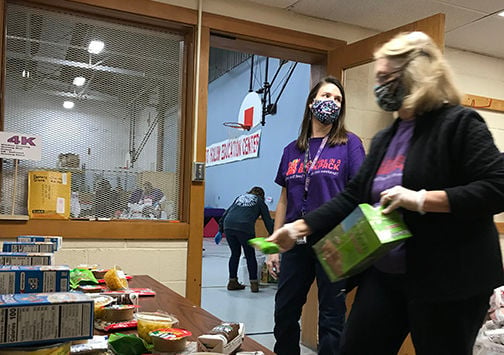 Heather Treinen, left, double-checks the week’s menu while Cheryl Holloway sorts out items for individual packs for Blessings in a Backpack. 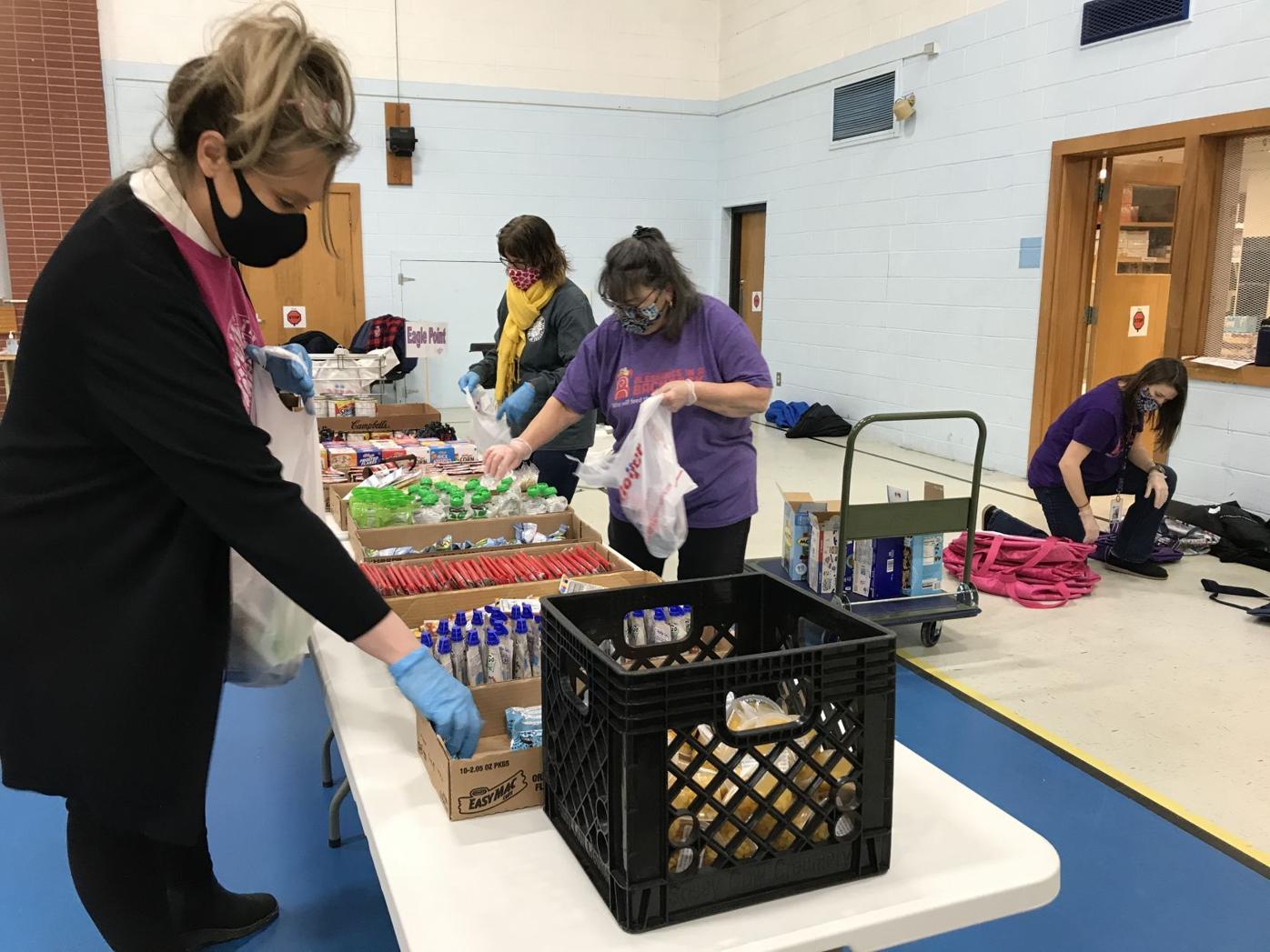 Heather Treinen, left, double-checks the week’s menu while Cheryl Holloway sorts out items for individual packs for Blessings in a Backpack.

Early Wednesday morning, the Holum Education Center gym becomes a distribution hub as volunteers set up up folding tables marked by school names, each covered with food to be sorted for delivery to hundreds of kids, ensuring that among the many anxieties that can accompany a child at this time, hunger does not need to be one of them.

As volunteers sort out food, coordinators refer to charts above a desk in what was originally designed as an equipment room. A white board lists Easy Mac, popcorn, sweet corn, yogurt, cereal and a half dozen other items to be included. Allergy-conscious packs are set aside for kids who can’t have certain foods.

Blessings in a Backpack, a national organization, is based on the idea that public school meal programs play an essential role in the health of many children who may come from homes where there are issues of food scarcity. Free and reduced cost meal programs can help those families during the school day, but kids don’t have the option of going to the lunchroom over the weekend.

“It’s not the same this year with COVID,” said Treinen, “but normally it’s 65 hours from Friday afternoon to Monday morning, that they may be food insecure. And so we wanted to bridge that gap and provide them with nutritional food that’s kid-friendly, easy to prepare, that they could eat over the weekend when they’re not in school.”

The DeForest chapter began in March 2014 with Treinen reaching our to the national organization after seeing it mentioned in a magazine article. The national organization provides non-profit organization establishment, accounting services and other assistance, but to get started, Treinen needed to raise funds equivalent to at least a third of a year’s costs to ensure a successful start.

Treinen with partner Ann Staniforth developed a plan and put it to the DeForest Area School District Superintendent, and put together a system for them to work with the district food services.

Less than 5% of funding goes toward the national organization, while the rest goes toward purchasing food for kids. It started with 13 kids served at Windsor Elementary, then they expanded to Eagle Point and Yahara, then to the middle school, 4K and the high school.

Their funding comes from individuals, local businesses, community organizations (some of which have included Blessings in their budget), and community development grants.

The food is ordered on about a weekly basis from Woodman’s and Costco, where the group is able to get products at bulk pricing.

“I have four menus that I work off of and there are about 12 items in each menu,” said Treinen, “because we don’t want to give the kids the same thing every week. It is about $4.50 we spent per kid per week.”

The inspiration for starting the program in DeForest came when Treinen met a woman who had been looking for work at Windsor Breads, owned by Treinen’s sister. The woman needed help to make ends meet for her children and one day Treinen had occasion to see the woman’s apartment.

“I went to her apartment and she had one chair, a mattress, a kitchen table and that was the only furniture in the house and the refrigerator was pretty much empty,” said Treinen. This single mother of four young children was facing eviction, and Treinen and her sister were able to rally support to help this family, but it started her thinking.

“That just opened my eyes to what could be right next door in my community and I just had this urge to deal with it,” said Treinen. “I have a passion for kids--I have three of my own--and that was the part that hurt the most seeing these kids. They have no control over what situation their parents are in, and so that is what motivated me to focus on what I could do for the kids.”

In addition to ensuring food security for the nutritional well-being of children in and of itself, the goal of Blessings in a Backpack is to provide children a better chance in the future, given the significant correlation between chronic hunger and poor test scores, difficulty in concentration, behavioral issues, and a myriad of challenges that can prevent a child from getting everything from their in-school education.

“I have Ann and two other core coordinators and then depending on the week, seven to eight volunteers that come each week to pack,” said Treinen. “and once they start they usually stay with us--I haven’t lost many volunteers.”