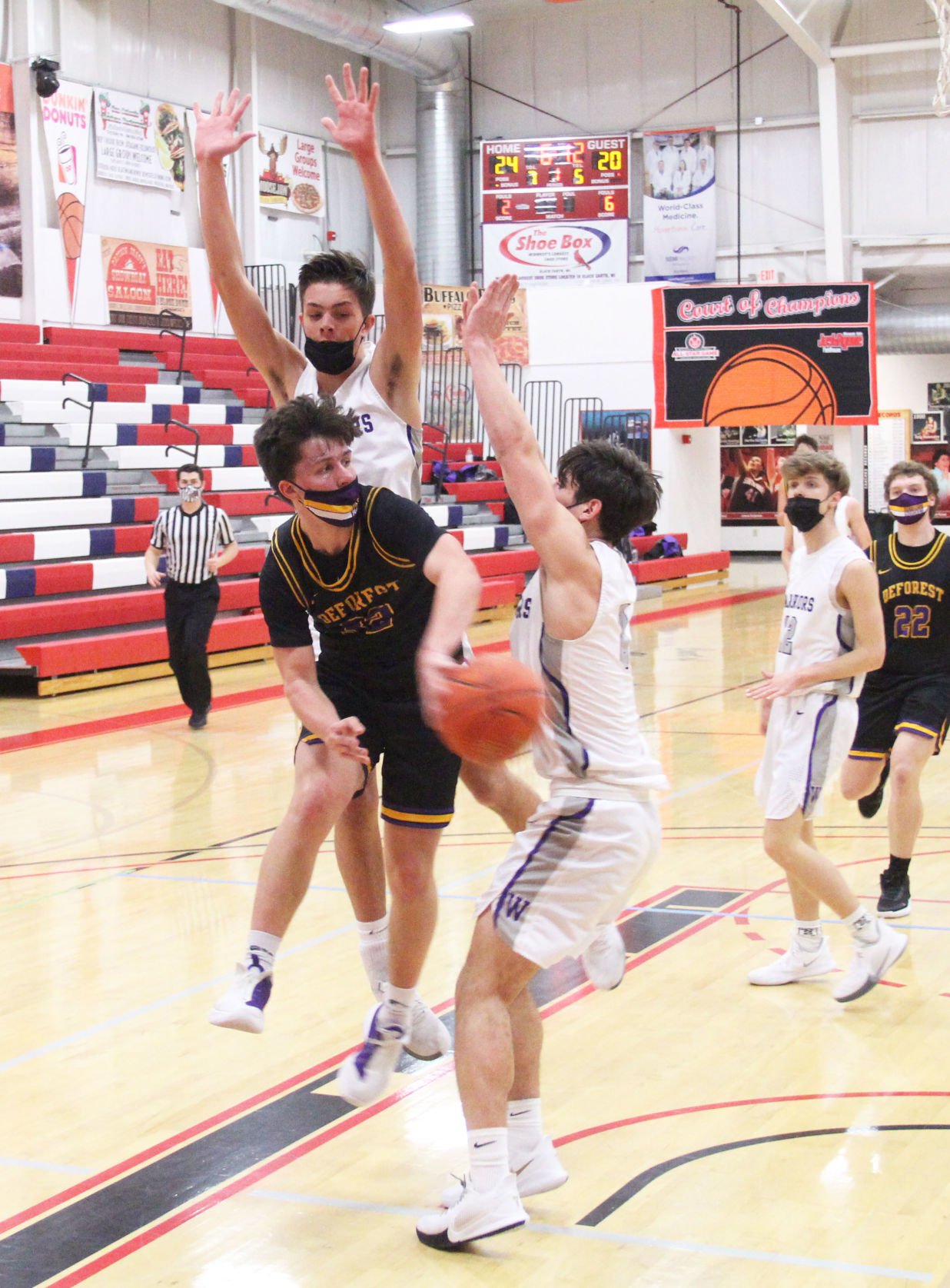 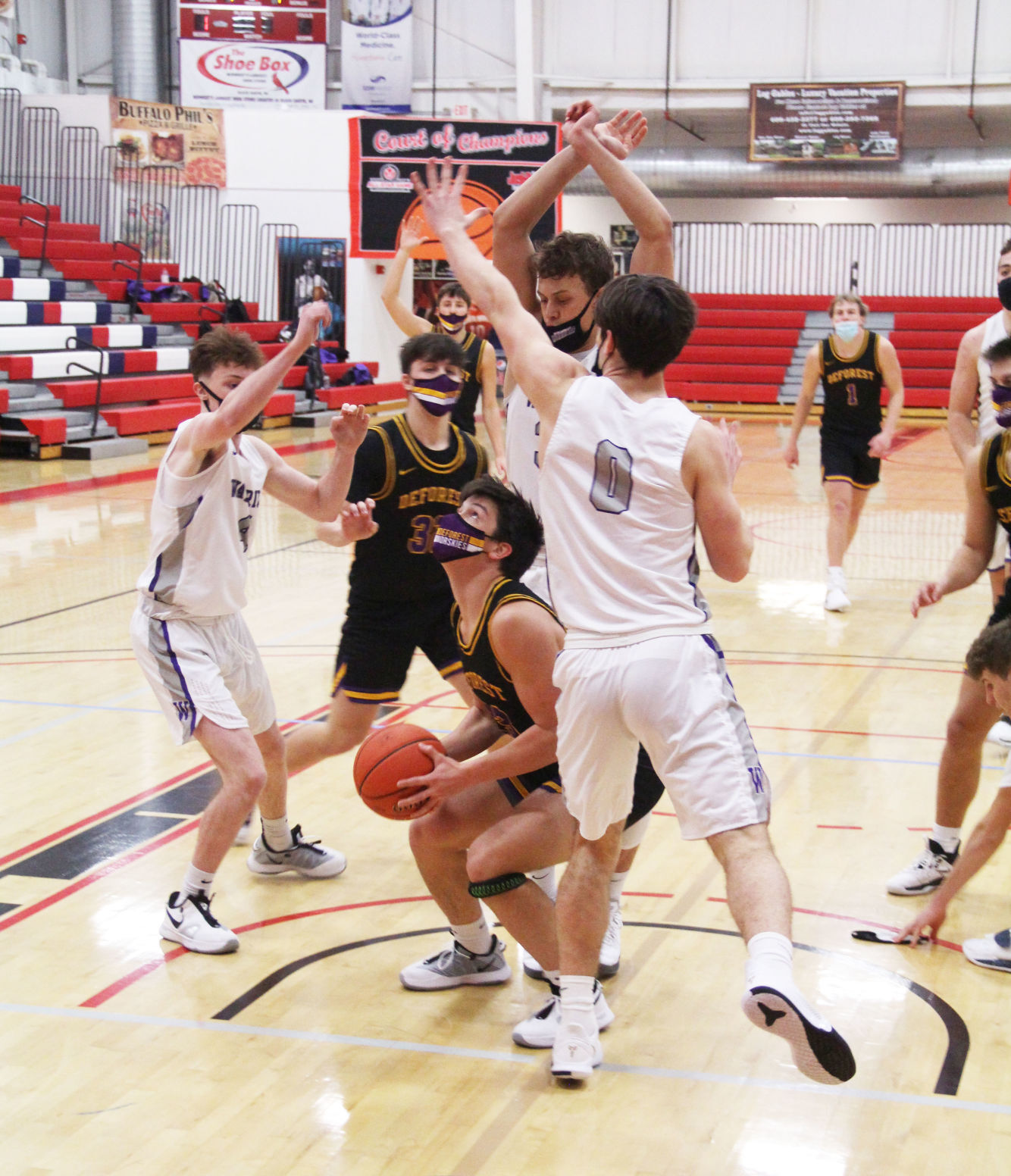 DeForest’s Deven Magli looks for an open to score after being surrounded by a host of Waunakee defenders.

DeForest’s Deven Magli looks for an open to score after being surrounded by a host of Waunakee defenders.

The DeForest and Waunakee boys basketball teams continued their storied rivalry last Friday with a matchup at Just A Game Fieldhouse in Wisconsin Dells.

In turned into another classic battle between the two programs. It came down to the final seconds on the clock and Waunakee escaped with a 67-65 victory.

“Give them credit, they threw it in the paint and beat us up a bit,” DeForest coach Craig Weisbrod said. “I think the Norskies, although I’m proud of them, we have to get it inside in the paint. They also had 13 offensive rebounds to eight for us, so they beat us up a little bit. But it was a great game and a great rivalry.”

Things looked good early for the Norskies, who jumped out to a 10-0 lead. Max Weisbrod scored the first two points at the free-throw line before a second ticked off the clock, as the Warriors were called for a technical for dunking during warmups. Weisbrod and Deven Magli both had five points during the opening run.

“It was a great start for us,” Weisbrod said. “I was really happy about that.”

Waunakee answered with 12 straight points to take their first lead of the game.

“They got back in the game by going to the post,” Weisbrod said.

DeForest regained the lead, 15-12, with a three-pointer by Nolan Hawk and jumper by Weisbrod.

The Warriors took their biggest lead, 30-23, of the first half after getting a trey from Jaxson Zibell.

The Norskies were able to grab some momentum back at the end of the half. They used a 12-3 run to take a 35-33 halftime lead.

After the Norskies tied the game on a three-pointer by Weisbrod, Waunakee got a trey from Casey Fischer and basket in the paint from Randy Vojtisek to regain the lead, 53-48, for good.

DeForest remained within striking distance the rest of the way, but was unable to overcome the deficit.

Drew Lavold hit a free throw with 11 seconds remaining to put the Warriors up two, 67-65.

DeForest got off two shots in the final seconds, but were unable to get them to go in.

“Max did well,” Weisbrod said. “He got a little worn down and he has to play through that.”

After the loss to Waunakee, DeForest bounced back and beat Edgerton the following day.

The win pushed the Norskies to 3-2 overall.

DeForest grabbed momentum in the first half with a 38-29 surge.

The second half was highly competitive, and Edgerton took two points off the final margin. The Crimson Tide outscored DeForest 35-33 in the final half.

The Norskies had a very balanced offensive attack, as Weisbord (19), Grundahl (17), Hawk (12) and Brody Hartig (10) scored in double figures.

This Friday, DeForest will play at Janesville Craig at 7:15 p.m.