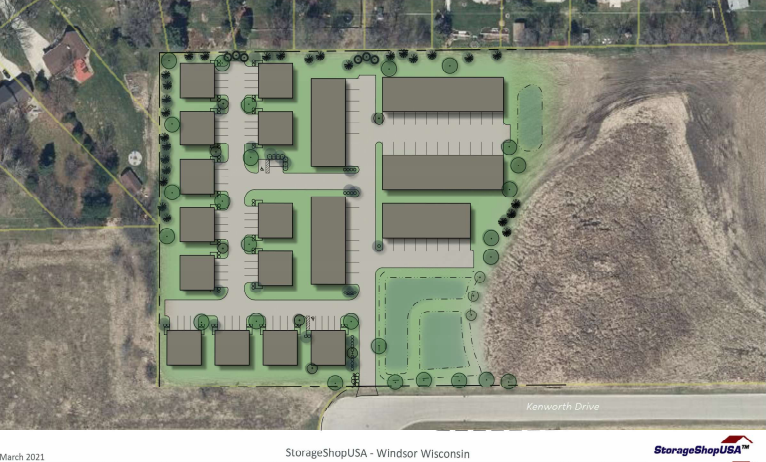 Site plan for a Storage Shop commercial condo development along Kenworth Drive, which has been approved by the Windsor Village Board pending results of an environmental study.

The Windsor Village Board has approved the next phase of Bear Tree Farms residential development, adding another 50 homes to the land on the eastern edge of the village, where other home construction has been progressing.

Site plan for a Storage Shop commercial condo development along Kenworth Drive, which has been approved by the Windsor Village Board pending results of an environmental study.

The Windsor Village Board has approved the next phase of Bear Tree Farms residential development, adding another 50 homes to the land on the eastern edge of the village, where other home construction has been progressing.

The Windsor Village Board gave final approval for two residential projects on April 1, while all but guaranteeing progress on a commercial project pending results of an environmental study.

Two residential development projects came before the Windsor Village Board at their Thursday meeting, one a set of duplexes on Gray Road, east of County Highway CV, and the fourth phase of Bear Tree Farms south of Windsor Road, east of Highway 51.

The duplexes, proposed by David West through Windsor Development Corporation, included 12 units in six ranch style buildings. Echoing a concern brought in an earlier meeting of the Plan Commission, Project Manager Charles Elliott was asked about the appropriateness of a “ranch style” and the planned proximity of the units to the road.

Elliott explained that the style worked well with a senior-friendly layout minimizing walking distances for those returning home and cutting the number of stairs, describing the target market as those “aging in place.”

The proposed development would also be less than a half mile from the Parkside Village assisted living facility.

When Trustee Bruce Stravinski asked about an expected timeline for the project, Elliott told the board that he was looking forward to breaking ground as soon as possible, and at the same time project managers were hoping that lumber prices may come down between now and May. The project was approved by the board with a unanimous vote.

The board also heard a proposal for development at Bear Tree Farms, where developer Snyder and Associates is planning 50 additional homes, which was voted upon and approved unanimously by the board.

A third project that has been tentatively approved would build on what is now farmland south of Lake Windsor, at the intersection of Kenworth Drive and County Highway CV/Lake Road.

Storage Shop USA Chief Operating Officer Tim LeBrun explained the plan for 26 duplex commercial condominiums to be sold for local businesses and personal storage. Following a process of the firm reaching out to nearby property owners, including those at the Lake Windsor Country Club, the village recommended approval of the project, contingent on the results of a wetland delineation study.

Plans for drainage took up much of the discussion with the board, with LeBrun telling the board that the company could build on the entirety of the 13-acre plot, but that was not part of the plan. The future drainage plan, according to LeBrun, included calculations based on preparedness for a 100-year rain event and “an extraordinary amount of rainfall that hopefully none of us will see in our lifetime.”

A 100-year storm event does not necessarily describe the likely time between such events, but describes a 1% chance or a one-in-100 chance any given year. According to the Wisconsin State Climatology Office, the rain the resulted in the floods of late 2018 far exceeded the “100-year mark” for much of Southern Wisconsin.

LeBrun told the Village Board that as part of the excavating of the property, “engineered soil” would be used in coordination with landscaped plants that will provide additional absorbency.

As a series of business and storage facilities, concerns also included noise and headlights disturbing nearby homes, to which LeBrun pointed out that the plans included, as opposed to a privacy fence, strategic landscaping.