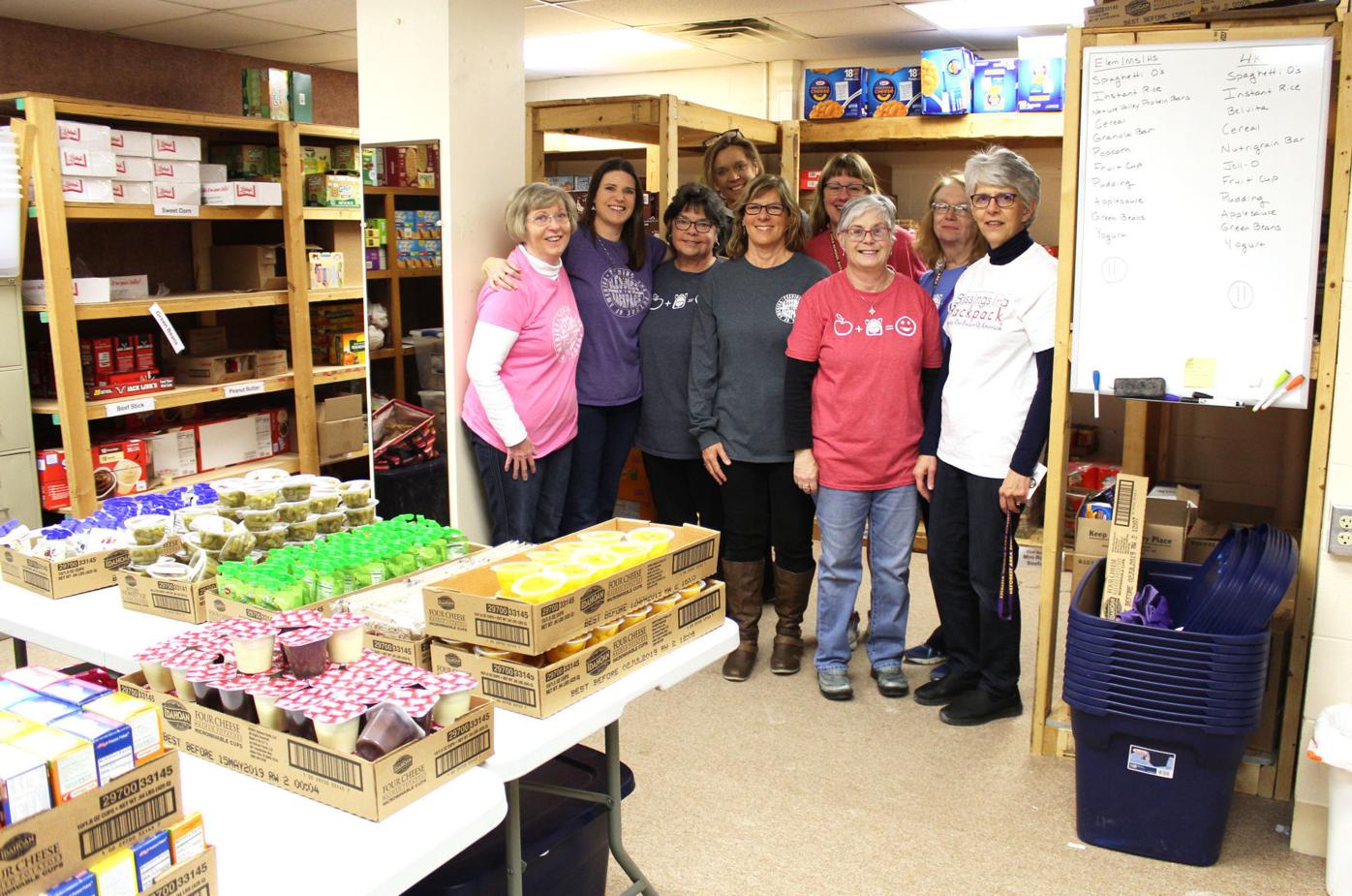 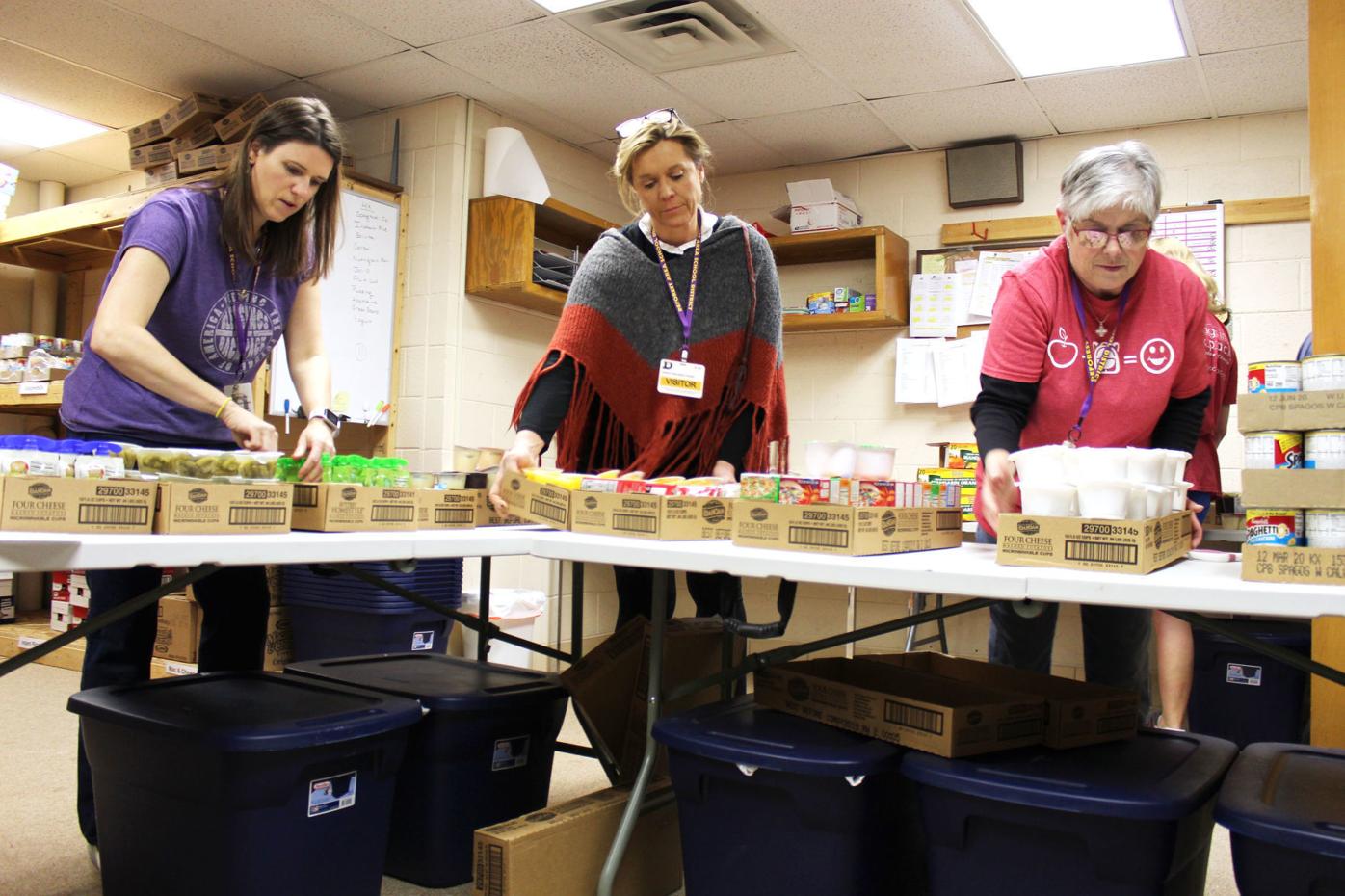 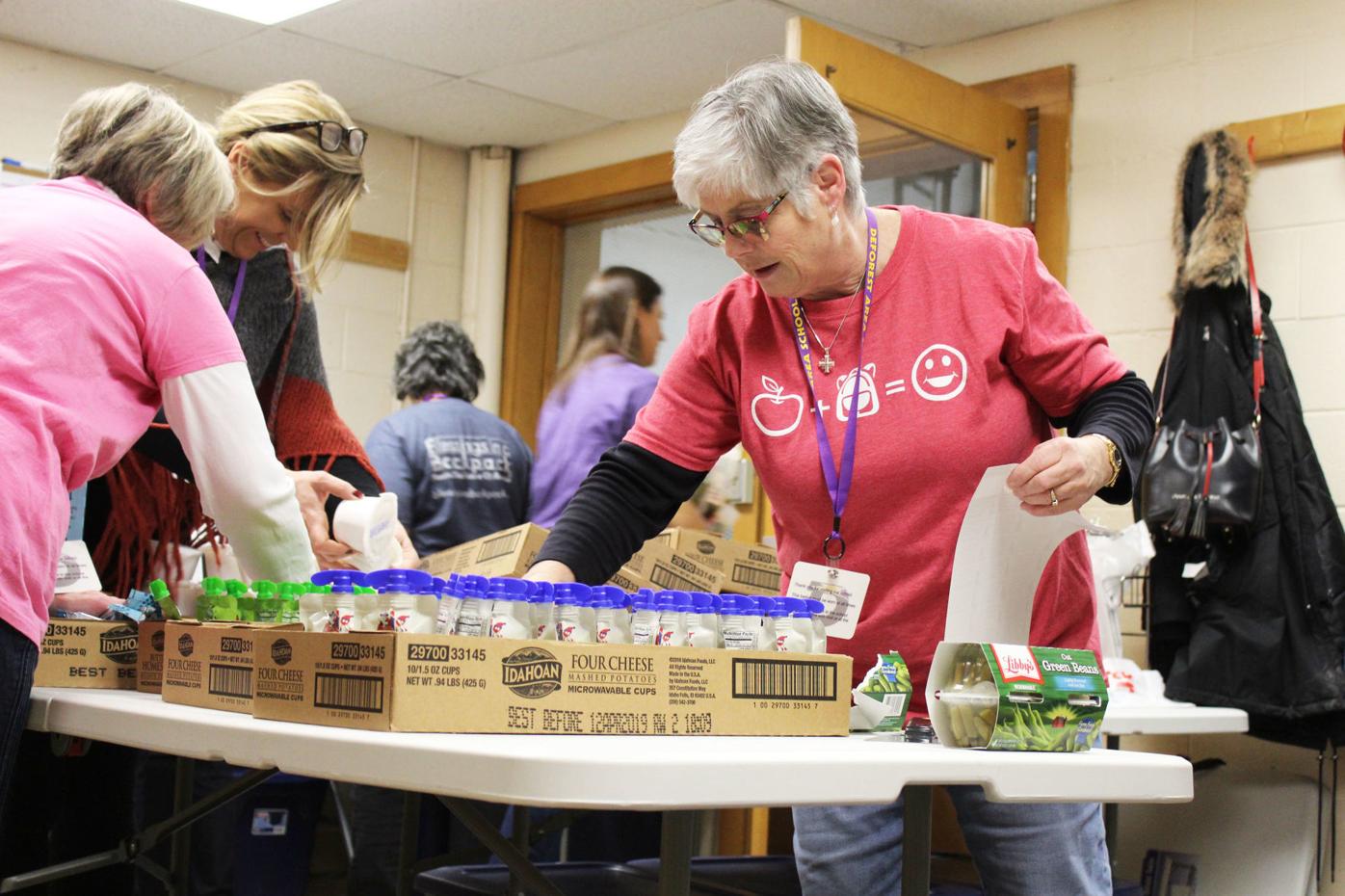 Anne Staniforth works alongside other Blessings in a Backpack volunteers on a recent Friday. Staniforth ensures students with allergies receive bags that meet their dietary restrictions. 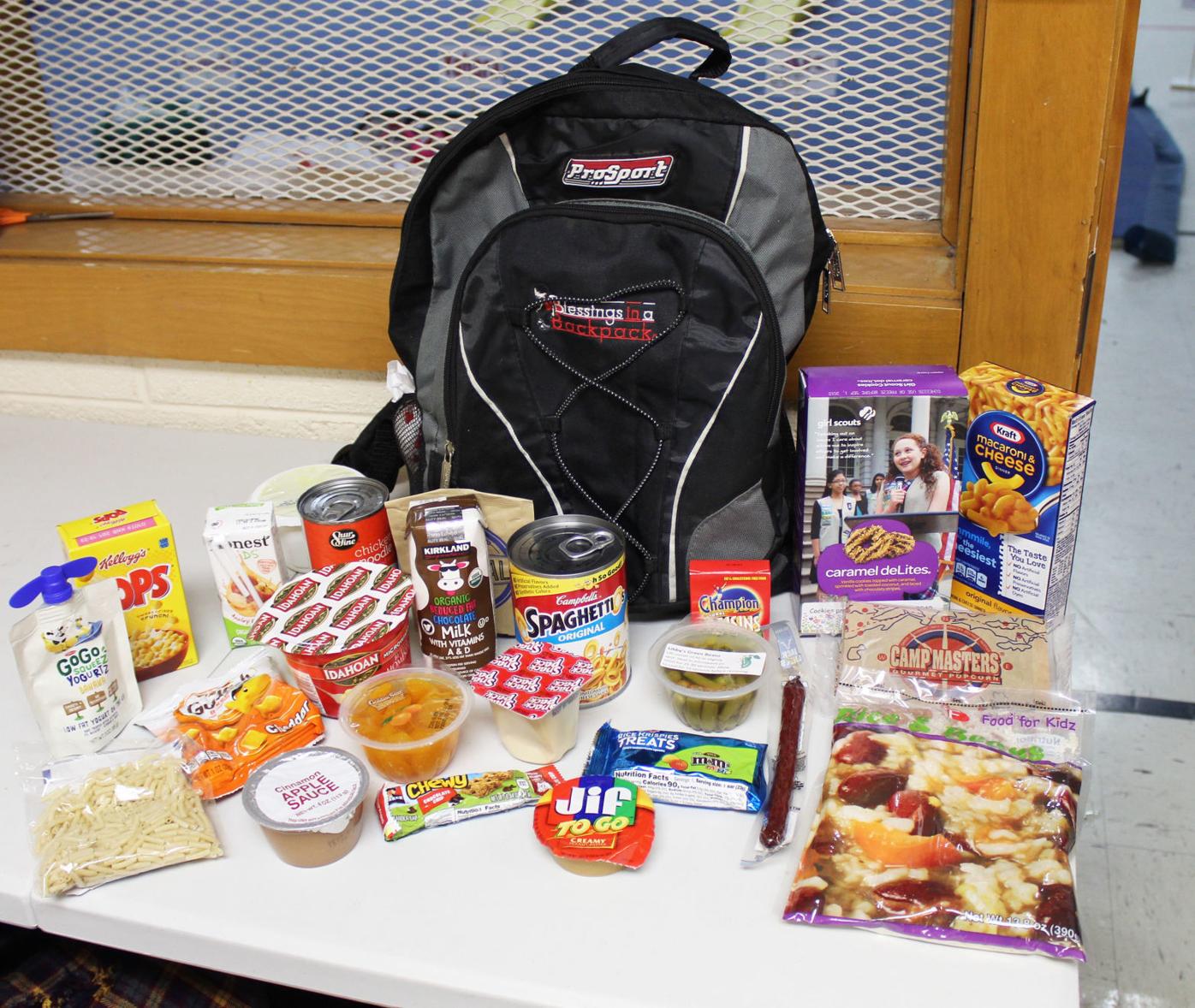 Pictured are some of the items Blessings in a Backpack recipients may receive in their weekly bags, such as macaroni, applesauce, peanut butter and soup. 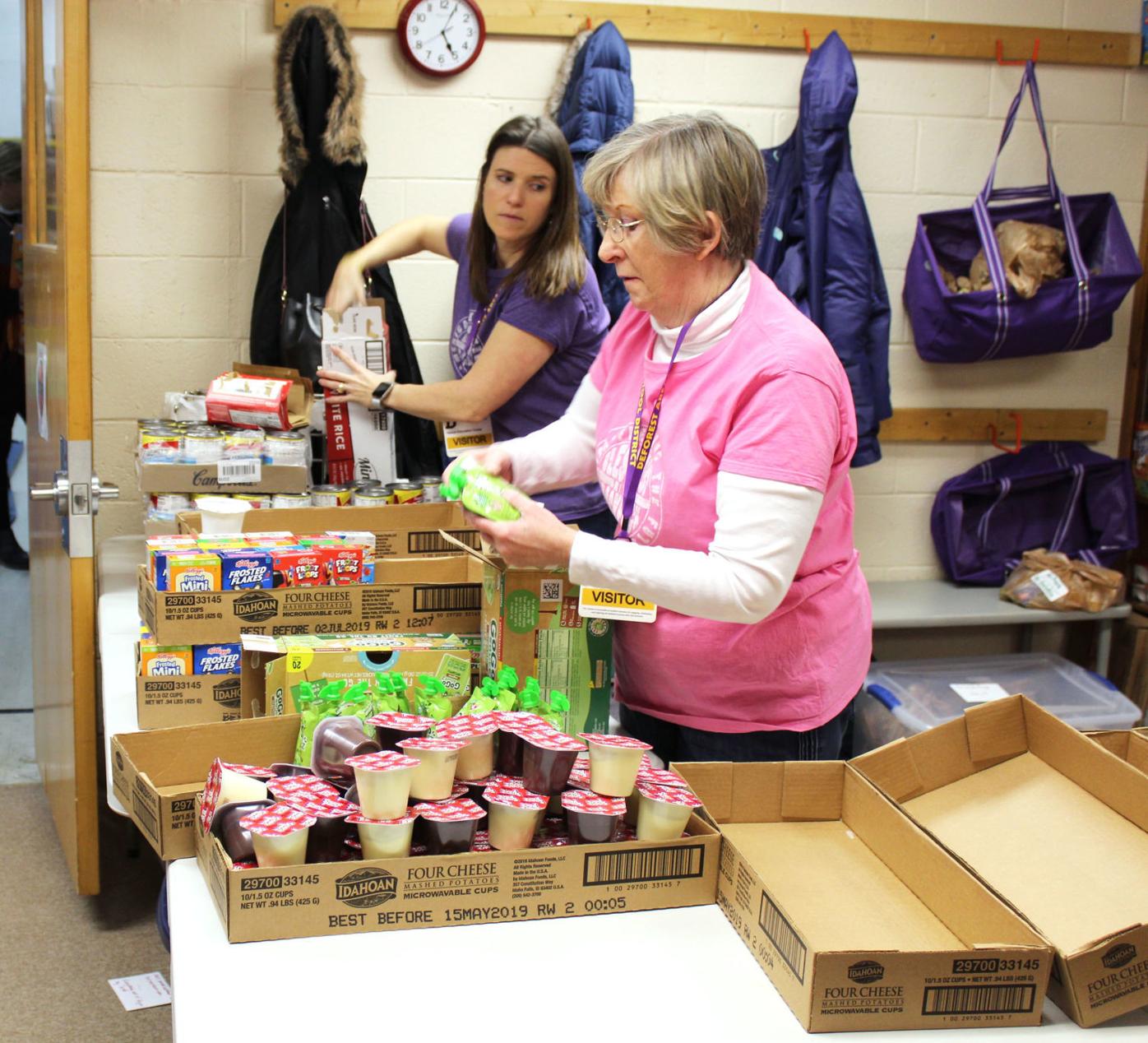 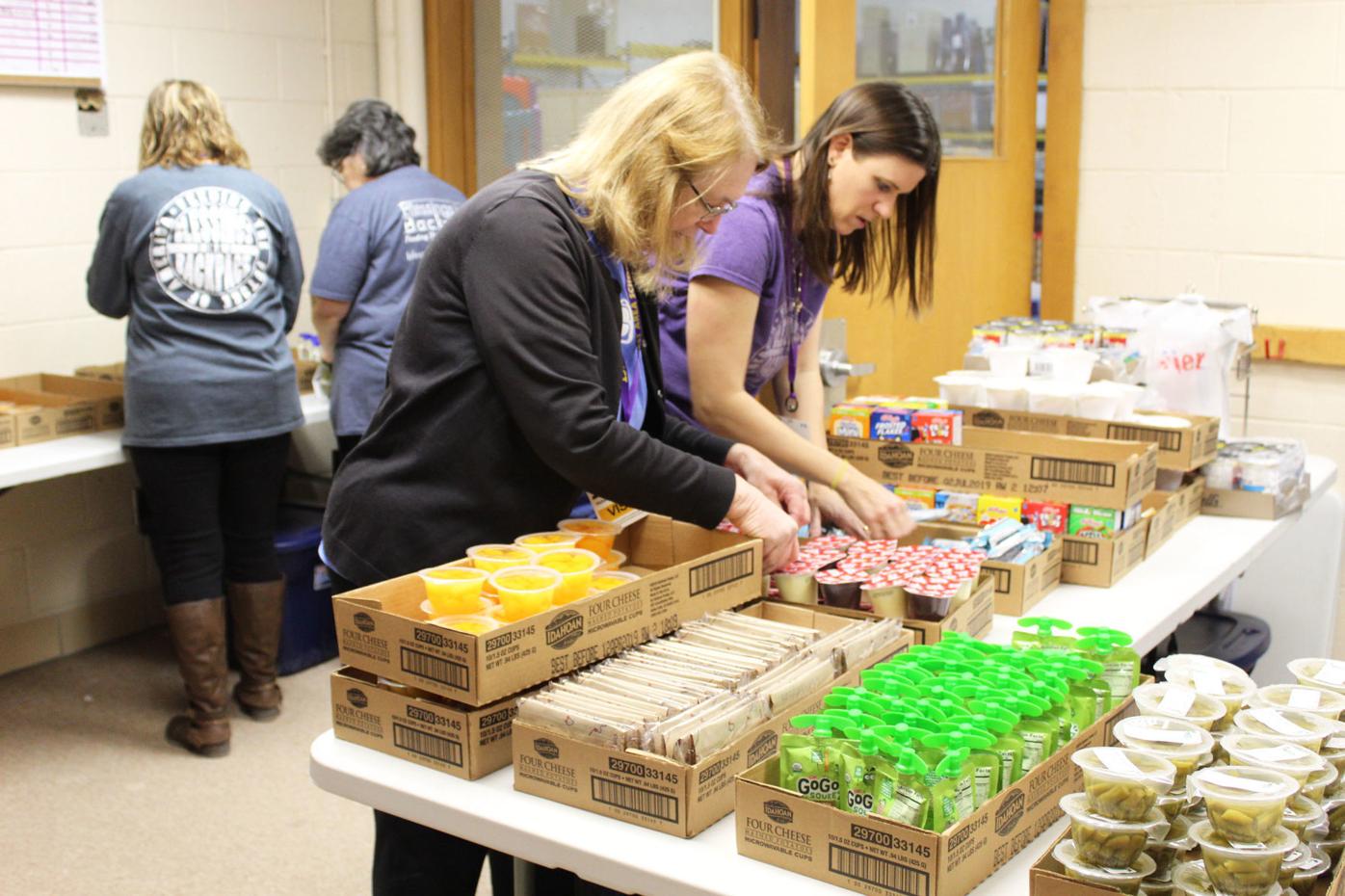 Cheryl Holloway and Heather Treinen tally items before beginning to pack a group of bags.

Anne Staniforth works alongside other Blessings in a Backpack volunteers on a recent Friday. Staniforth ensures students with allergies receive bags that meet their dietary restrictions.

Pictured are some of the items Blessings in a Backpack recipients may receive in their weekly bags, such as macaroni, applesauce, peanut butter and soup.

Cheryl Holloway and Heather Treinen tally items before beginning to pack a group of bags.

When the local chapter of Blessings in a Backpack began five years ago, volunteers were preparing bags for only about 10 students. Now the group is providing food on the weekends for approximately 175 youth.

Blessings in a Backpack is a national nonprofit that feeds over 87,300 children across 45 states by providing bags of food to feed them throughout weekends during the school year. The idea for the DeForest chapter stemmed from experiences Heather Treinen, one of the program’s coordinators, had with a family in Windsor in need of some help.

The family – a single mother with four children – was being evicted the week before Christmas several years ago. Going into their apartment was a startling experience for Treinen, who said the family only had one chair, a kitchen table and a mattress on the floor.

“They barely had any food,” Treinen said. “… That just opened my eyes to what is right here going on in our community. You hear about need, but to actually see it firsthand and help somebody with it was eye-opening to me.”

Even after Treinen and her sister helped get the family in touch with relatives in St. Louis and assisted them when they were moving, the encounter stayed with Treinen. A few months later, she saw a feature about Blessings in a Backpack in People magazine. Ideas about starting a chapter in DeForest began to flow.

“It just gnawed in the back of my mind,” Treinen said.

As Treinen researched what it would take to begin a Blessings in a Backpack group locally, she contacted the coordinators of Norski Nibbles, a local program that provides weekly lunches for children during summer break. They put her in touch with Anne Staniforth, who “was really excited” about the idea, according to Treinen. Shortly after, the pair teamed up and headed out to local businesses to request start-up funds.

After receiving enough money to qualify the group to be recognized as a part of the national Blessings in a Backpack network, volunteers went to work to coordinate the first week of bag packing. The program was first put into place at Windsor Elementary School, where the group only served about 10 students during the initial launch.

Once things were up and running, the program spread to Morrisonville Elementary School, followed by Eagle Point Elementary School and then Yahara Elementary School. From there, volunteers reached out to local 4K providers to see if there were students to be served at those facilities – Blessings in a Backpack currently provides 17 4K students with bags each week.

“We worried about trying to reach those kids because at that age a lot of times there’s the need to not feel different,” Treinen said.

However, after instituting the program at the middle school, it has grown, according to Treinen. This year the group began delivering bags to the high school as well, although only seven students are served there so far.

Currently the DeForest Blessings in a Backpack chapter packs bags each Friday for 173 students, but that number fluctuates due to students moving in and out of the district among other reasons. Students who qualify for the free and reduced meal program through the DeForest Area School District are eligible to receive the bags.

According to Becky Terry, the district’s food services supervisor, 19 percent, or 675 students, of the district’s population participate in the free and reduced meal program. As Blessings in a Backpack gains more recognition and more families opt to participate, volunteers hope to serve more students. Another local program coordinator, Cheryl Holloway, said people are surprised to hear there’s a need in the area.

“There’s a lot of people that are shocked that there’s poverty and hunger in DeForest,” Holloway said. “… That 173 is only part of the kids that are hungry. I think that’s one of the biggest things is raising an awareness that there is a need in the DeForest area.”

Another DeForest chapter program coordinator, Lana Ziegler, knows firsthand that there is hardship in the district. Ziegler, who got involved with Blessings in a Backpack after she retired from teaching at the middle school, used to keep a box of granola bars in her desk to give to students who were hungry.

Community involvement is a big piece of program

Nowadays, many community organizations and local businesses know about Blessings in a Backpack and contribute food and funds on a consistent basis.

“Just about every group in town has approached us, in a way, to donate,” Treinen said.

Local scouts have donated cookies and popcorn from their sales so each bag includes a special treat once and awhile. Businesses like Midwest Professional Karate, Culver’s and Circle B Landscape Supply have donated profits from sales or events to the cause. Local groups such as the DeForest Area Rotary Club and DeForest Lions Club have also donated funds. North Windsor United Methodist Church hosts a garage sale every summer and contributes profits to the chapter. Residents in the Holland Fields neighborhood have given proceeds from neighborhood events. The list goes on.

“We’ve been blessed that people come to us and say, ‘We want to do this for you,’” Treinen said.

It costs approximately $150 to provide bags to a student through the program, which runs throughout the school year (38 weeks). Weekly bags include two meal items, such as macaroni, rice or soup, two breakfast items like a protein bar, cereal or oatmeal, one vegetable and one fruit serving, another protein source such as peanut butter or beef sticks, a cracker or snack item and a shelf-stable dairy product. Currently there’s four different menus that rotate so students don’t receive the same thing every time.

When the group began back in 2014 they provided eight or nine items in each bag. Now, thanks to the generosity of the community, they are able to add 11 things in the weekly packs, according to Treinen.

The core group of volunteers, which is about 12 people, spends an hour or two at the Holum Education Center on Friday mornings where they organize the food and pack the bags. From there, several of them deliver the bags to schools and 4K providers, where select staff members distribute the bags to students. The process is very confidential, according to the program coordinators – the volunteers don’t even know the names of the students.

The district’s food service staff sends a letter about opting into Blessings in a Backpack to all of the families whose students qualify for free or reduced meals. The volunteers only know how many bags each school needs.

The local chapter has also helped to spark Blessings in a Backpack programs at other area districts, including in Lodi, Poynette and Columbus. DeForest’s program coordinators have mentored volunteers in those places to help kickstart those groups.

While the Blessings in a Backpack chapter in DeForest is their focus, program coordinators encourage everyone to volunteer in the community in some capacity. Holloway said it makes the community stronger when people work together to meet a need.

Ziegler said one of the reasons why she and her husband volunteered was to be good role models for their kids, who are now adults that volunteer. Treinen said her children “don’t think twice” now about helping out after seeing her work with Blessings in a Backpack. She said the family’s involvement with the program has also opened her kids’ eyes to the needs around them.

“It could be their friend and they don’t know,” Treinen said. “(It’s important to) be sensitive to others’ situations.”

Treinen, who is proud of what the local chapter has accomplished, said it feels good to know she’s helping someone, even if she doesn’t know them.

“My hope is that I’ve just made their day a little better,” Treinen said. “We want kids to know that they’re thought about even when they walk out that (school) door.”