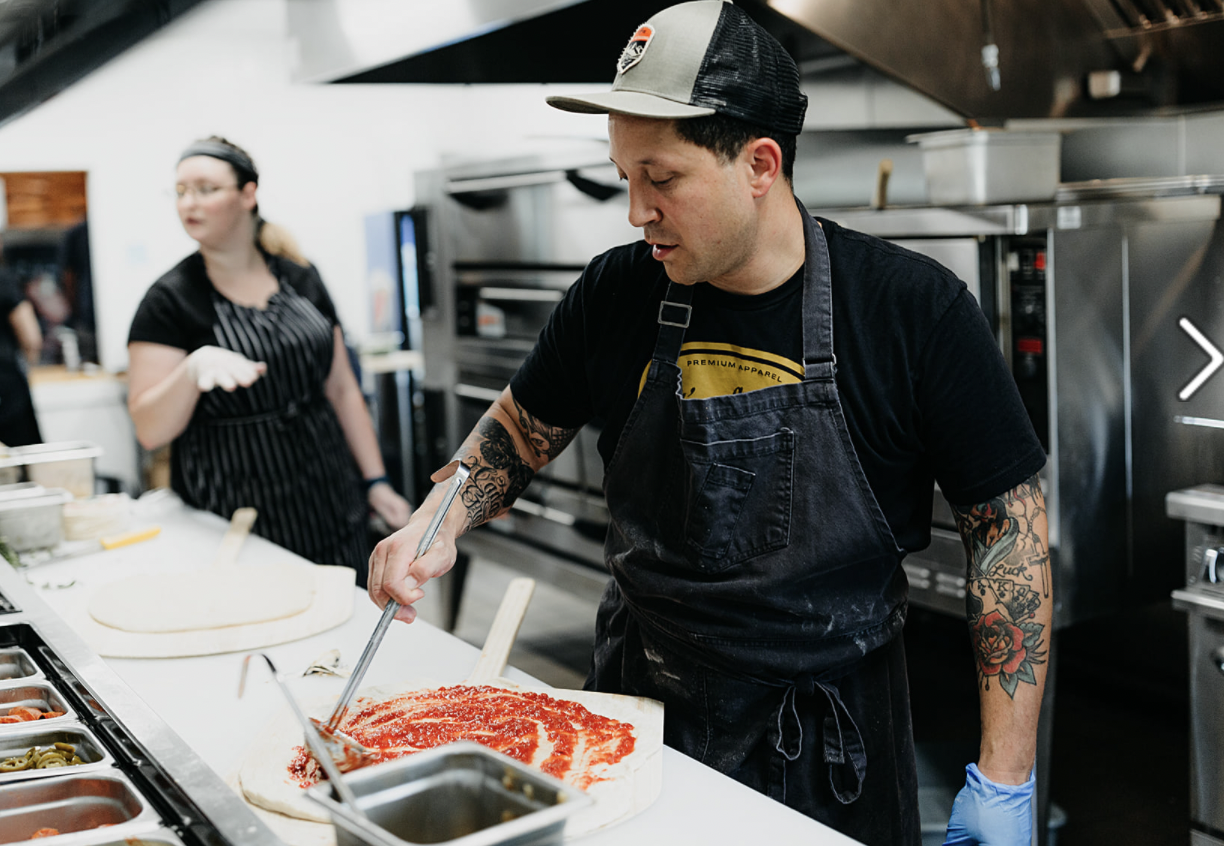 Branch and Daughter market features gourmet ingredients including andouille sausage, jars of sauces, slow cook flavoring packets, jars of olives, and on the other side, wine and spirits.

Branch and Daughter market features gourmet ingredients including andouille sausage, jars of sauces, slow cook flavoring packets, jars of olives, and on the other side, wine and spirits.

A new market in Windsor is highlighting local producers while taking inspiration from around the country.

Staff started coming in just before 9 a.m. for their 10 a.m. opening, with co-owner Judson Branch giving members of the crew instructions before the doors open.

“Guess what, today is the day that you’ll always be able to put on your resume and say you got to do an opening for a very unique place!”

Branch and Daughter opened for their official first day of business on July 23, a dream of owners Judson, 39, and his wife Monique Branch, 38, who closed on the building at 6601 Traveler Trail in February and have since renovated it to be a combination market-restaurant.

Along one wall is a meat counter with tenderloin, ribeye, brisket, chuck, flank, roast, oxtail, lamb, pheasant, salmon steaks...including some choice pieces displayed hanging in an upright cooler. Opposite is the window to the kitchen where visitors can pick up pizza, a shake or ice cream.

In between are shelves of gourmet ingredients including andouille sausage, jars of sauces, slow cook flavoring packets, jars of olives, and on the other side, wine and spirits.

“Bourbon is something I wanted to focus on,” said Judson, “especially with the meat and seafood that we have.”

Judson points to several inspirations that have come together to make this shop. First being his memories going to local butcher shops with his parents growing up outside Harrisburg, Pennsylvania; another being a love for the “bodega” shop--most well-known on the East Coast — where you can pick up items as well as a quick meal and a drink; and they are also driven by a desire to contribute to better community health through quality food options.

Although Judson admittedly does not personally prescribe to “healthy eating” at all times (we all get busy and have exceptions), he has recognized the issue of convenience and cost leading many families to less nutritious options than they would prefer--fast food being one example.

“Our goal is to eventually have those ready-made meals done in a much more responsible fashion, you can trace the farm it’s coming from--you can say, ‘this is Grace Acres Farm that’s one mile up the road.’”

Before opening Branch and Daughter, Judson was an executive chef with Kalahari Resorts, the most recent of a series of high-level hotel restaurant management positions that has involved overseeing kitchens and rolling out restaurants across the country. Along that path, while working with Marriott Hotels, he met his wife Monique, who headed catering at the Phoenix Renaissance Hotel.

From there the two moved to Nashville, so Monique could take a position as a senior event manager at the Gaylord Opryland Hotel. Judson slowed down from being an executive chef, to a chef de cuisine at two Nashville restaurants with dinner-only service.

Later Judson was recruited back to being an executive chef for Kalahari Resorts, which led the two to move to DeForest. But over the years, Judson has known that he would want to open his own place, and driving through the neighborhood, they discussed the potential locations.

That time was limited though, as Judson was on the road, for a full summer, working Monday through Friday at a venue in Texas, then flying home to Wisconsin for the weekends. When it was them as a couple, Judson explained, it was difficult, but manageable, but the arrival of their daughter in February 2020 changed that.

“I’ve given a lot to other people and other companies and now that we have our little girl, it put things in perspective,” said Judson. “At the end of the day, I don’t want to just be seeing my little girl and family Facetiming in a hotel room at the end of the night.”

As Branch and Daughter is opening, he is still working 18-hour days, but he is able to help his daughter with breakfast in the morning and take her to daycare, and then see her at the end of the night.

Asked about their restaurant’s menu, Monique said that there is an element of risk in introducing unique items for some people who lean heavily into meat-and-potatoes style fare, but that their recipes are not untested. The two have done a lot of cooking outside their Conservancy Park home, which has led to questions of “what is that?” followed by “can I try it?”

“People don’t know what they don’t know,” said Monique, “it was harder getting people going, because our menu is a little different.”

For example, she said that some people might find it odd that, in addition to standard toppings, they have a pizza with clams, but once they had a picture of one posted online, one commenter responded: “I’ve never tried this, but I’m going to do it.”

“It is a huge risk, but especially now, coming out of COVID, people are wanting to try things and travel and do things,” said Monique, “so it maybe is working out better for us than if we opened in March, which is what we were planning.”

For many people, the forced inactivity and existential dread of the darkest points of the pandemic also brought a point of reflection and a unique opportunity to evaluate priorities, as Judson explained.

“I was able to be at home with my wife and daughter, and realizing, this means more to me than anything,” said Judson. “It really puts things in perspective that, at the end of days, where do you want to be, and how do you want to say that you spent your time?”