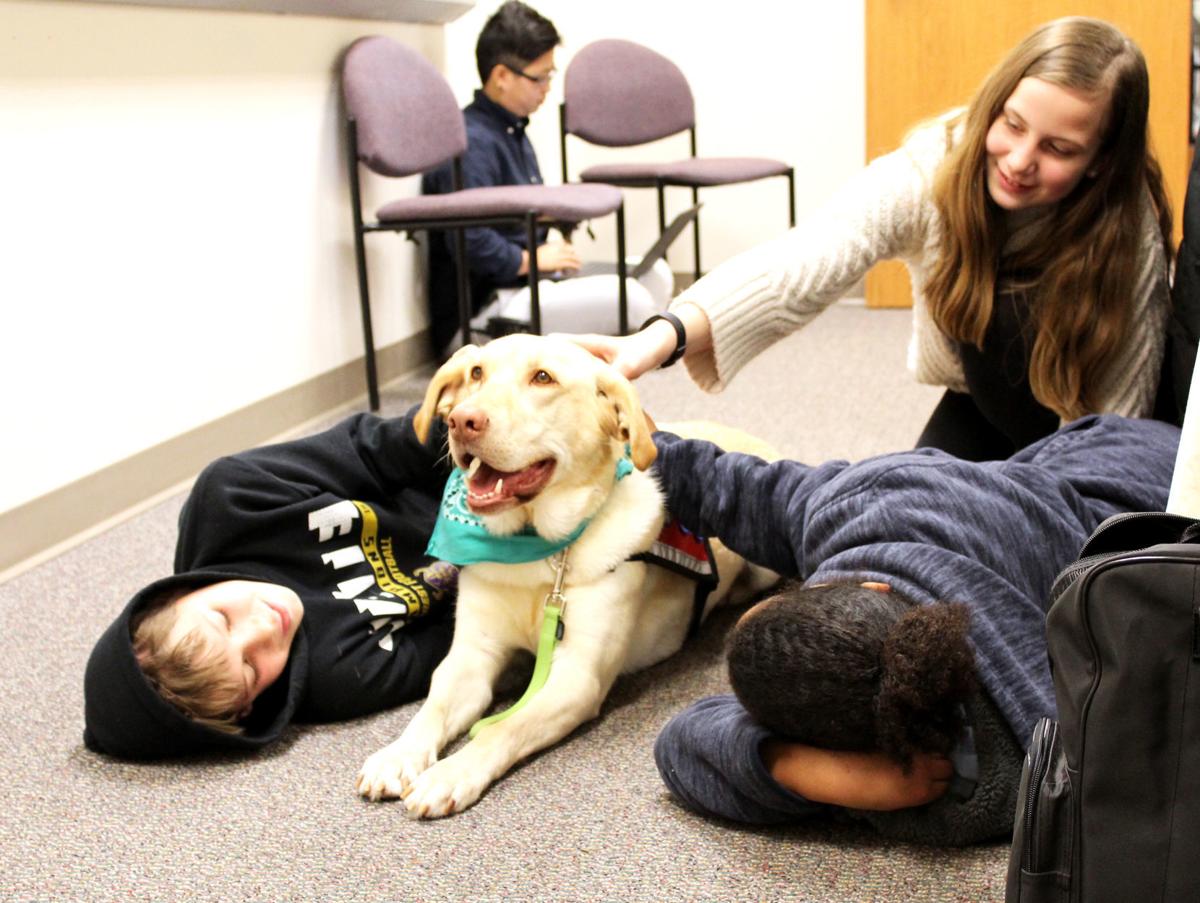 DeForest Area Middle School students visit with Lizzy, a five-year-old Labrador Retriever, who serves as a therapy dog through the Go Team organization. 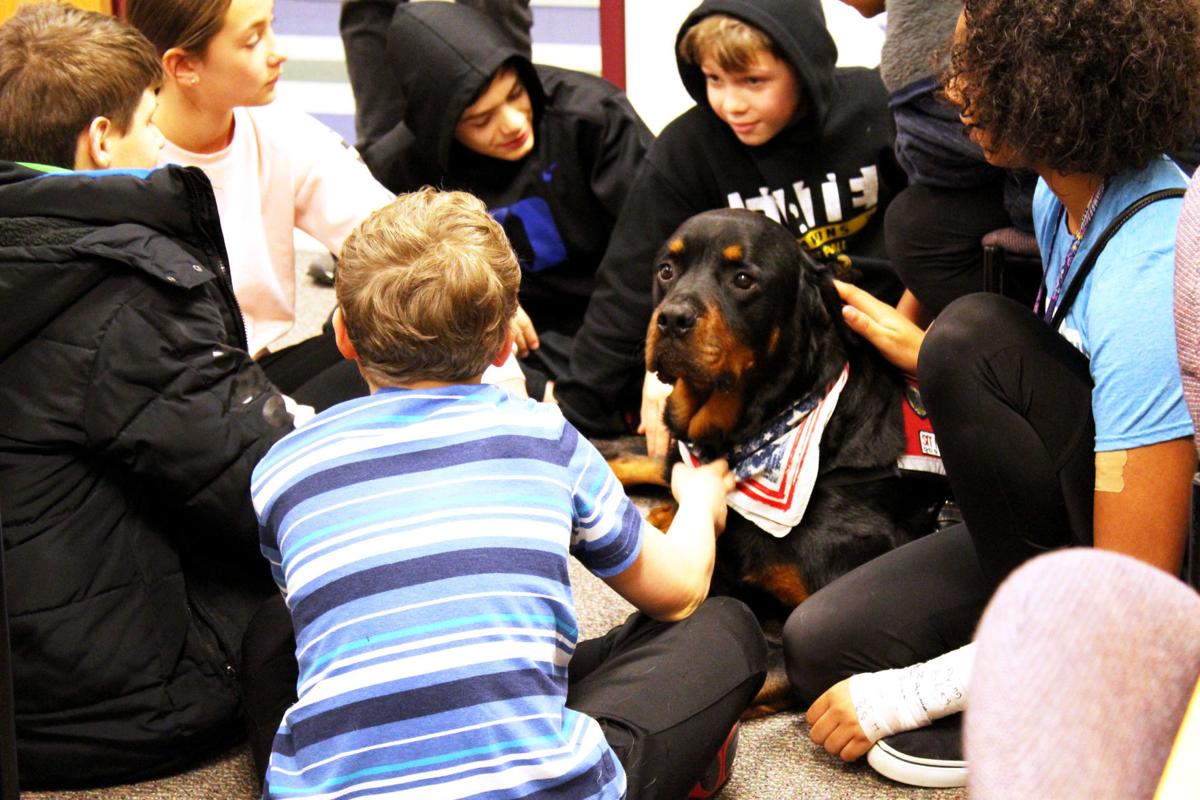 Max, a five-year-old Rottweiler and Go Team Therapy, Crisis and Airport Dog, sits in the middle of a circle of DeForest Area Middle School students during a recent visit on Jan. 23. 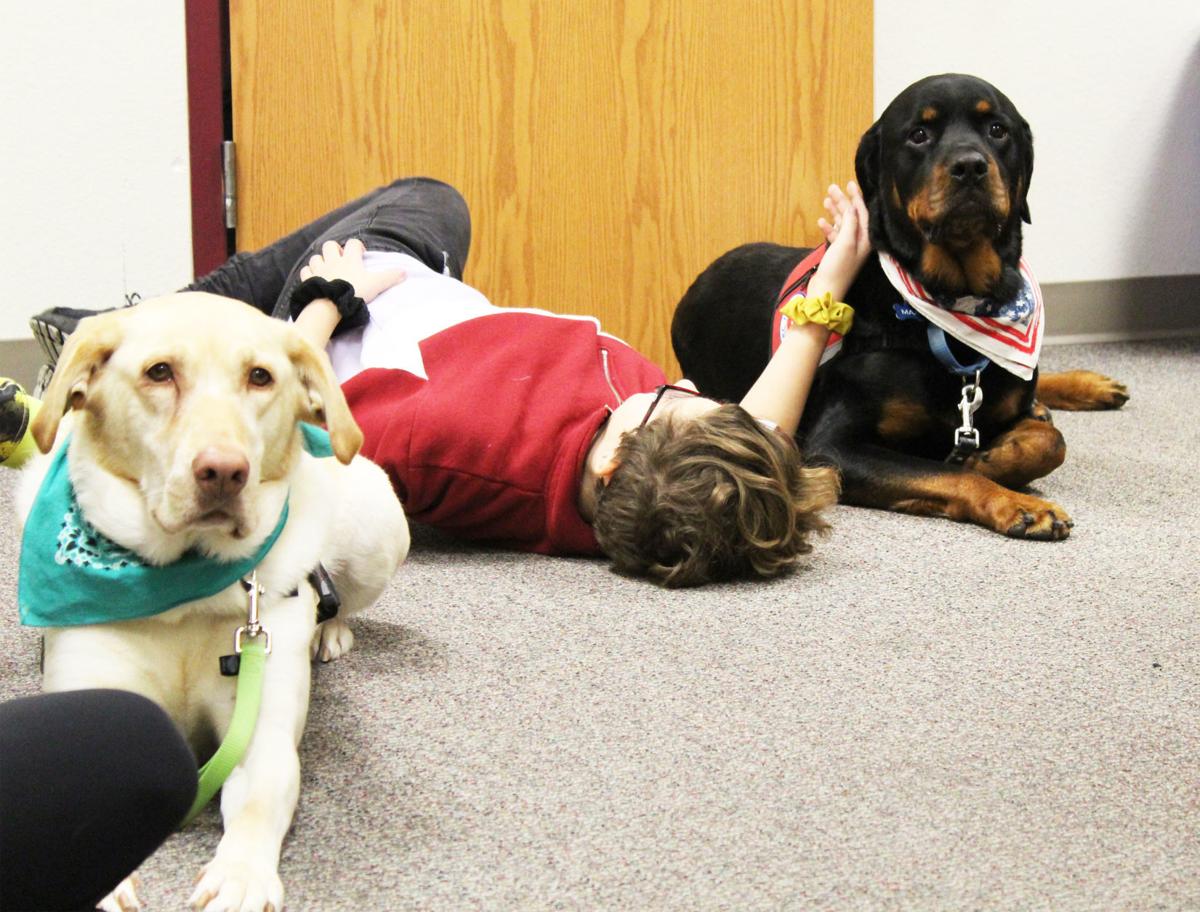 A local middle schooler lays on the floor flanked by Lizzy and Max, two dogs serving with the Madison segment of the national nonprofit, Go Team Therapy, Crisis and Airport Dogs. 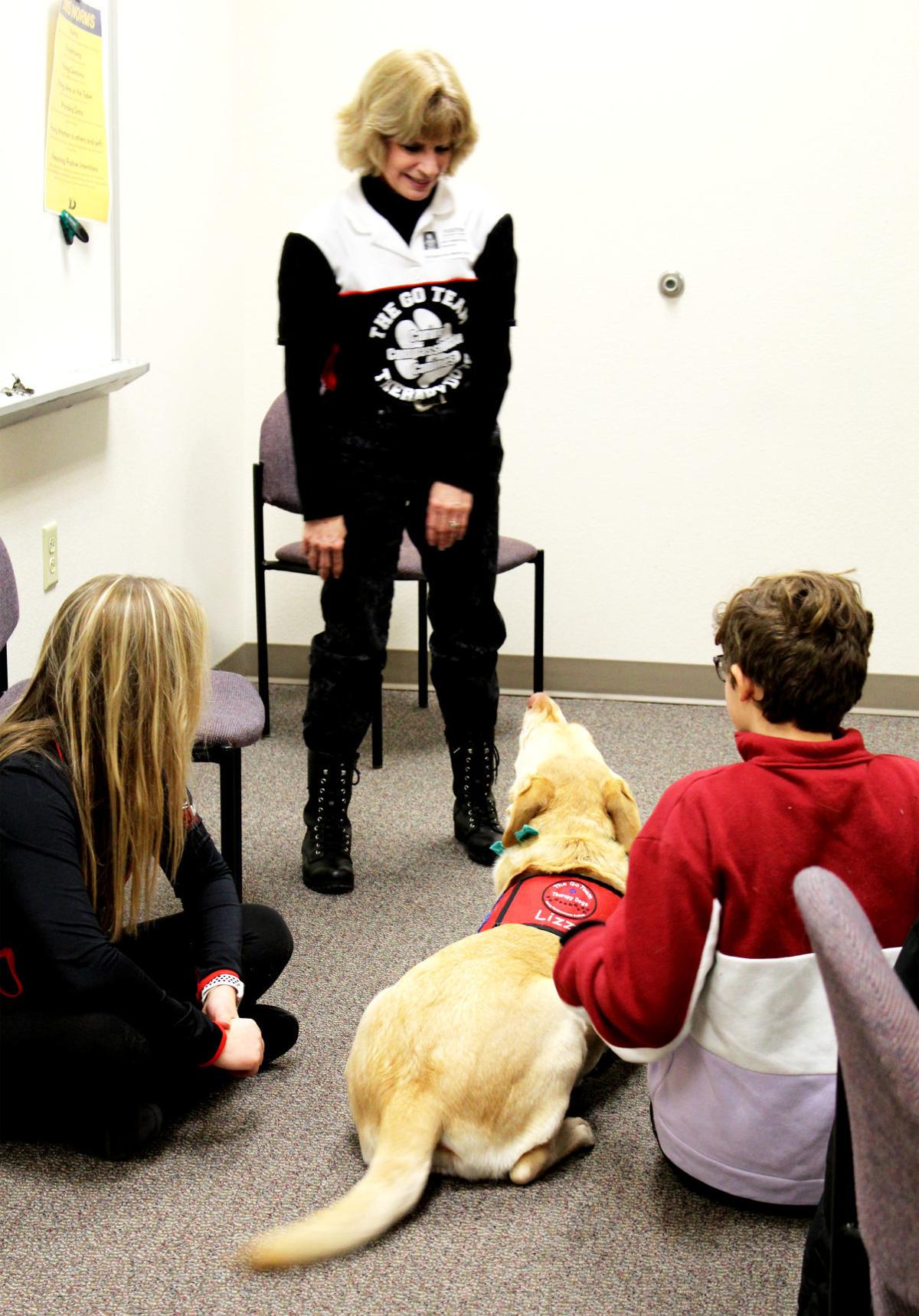 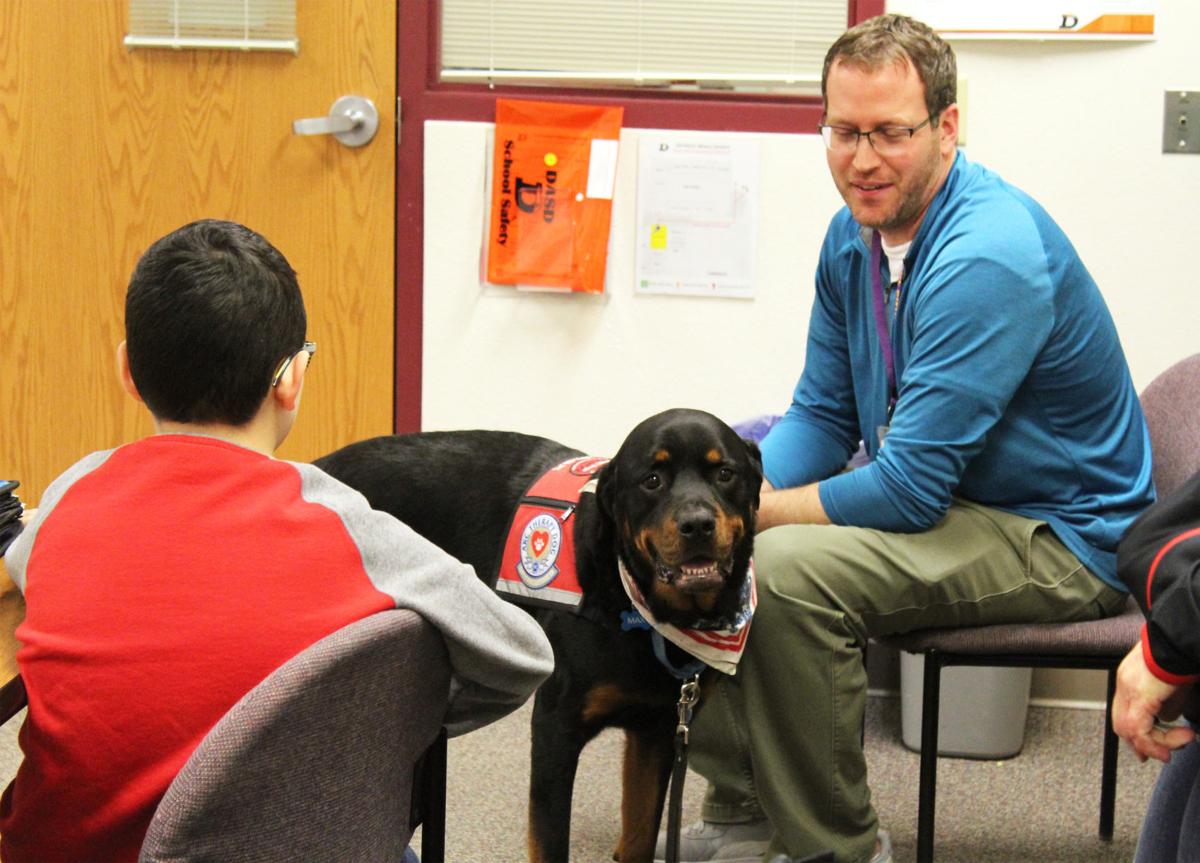 Ryan Wagner, one of DeForest Area Middle School's counselors, talks with a student while they visit with Max, a Go Team therapy dog.

DeForest Area Middle School students visit with Lizzy, a five-year-old Labrador Retriever, who serves as a therapy dog through the Go Team organization.

Max, a five-year-old Rottweiler and Go Team Therapy, Crisis and Airport Dog, sits in the middle of a circle of DeForest Area Middle School students during a recent visit on Jan. 23.

A local middle schooler lays on the floor flanked by Lizzy and Max, two dogs serving with the Madison segment of the national nonprofit, Go Team Therapy, Crisis and Airport Dogs.

Ryan Wagner, one of DeForest Area Middle School's counselors, talks with a student while they visit with Max, a Go Team therapy dog.

Many dog owners can attest how their animals bring them joy and seem to know when something is wrong. For the handlers of Madison’s Go Team therapy dogs, weekly interactions between their canines and people from all walks of life prove these connections are real.

The Go Team Therapy, Crisis and Airport Dogs program began several years ago after the Waldo Canyon fire in Colorado in 2012. After two therapy dogs visited evacuation centers and spent time with first responders, one of their handlers, current Go Team Executive Director Nancy Trepagnier, saw a need. A year later, the first class of Go Team therapy dogs began their training. Since then, over 1,000 teams have completed the program nationwide.

Locally, the Madison chapter of the nonprofit organization has nine teams that visit schools, senior living facilities, disaster areas, special events and other locations. Two of the local Go Team canines – Max and Lizzy – can regularly be found at DeForest Area Middle School.

Groups of students recommended by the middle school’s counselors visit with Max, a five-year-old Rottweiler, and Lizzy, a five-year-old Labrador Retriever, on the second and fourth Thursdays of each month. The students, who also have parent permission to interact with the dogs, get about 15 minutes with the animals. The majority of them coo, cheer or smile as they enter the room. Some chat with each other or the dogs’ handlers, others simply lay on the floor and pet the dogs.

According to Ryan Wagner, one of the middle school’s counselors, the program, which began last year, is creating positive connections.

“The students get to do something kind of fun that’s unusual for them in a day,” Wagner said. “Now they’re always asking, ‘Are (the dogs) coming today?’ They definitely get attached and it’s something they look forward to.”

While Max and Lizzy may look like ordinary dogs, when they have their Go Team vests on they’re all business. One of Max’s handlers, Jan Beamer, and Lizzy’s handler, Joan Hallett-Kenyon, were asked by trainers at Sit Means Sit Dog Training to consider joining the Go Team therapy dogs lineup. Max has been on the team for four years, while Lizzy enlisted last summer.

According to Hallett-Kenyon, who also visits Windsor Elementary School with Lizzy, when they tested last summer, the dogs had to sit under a table at a crowded restaurant in Madison and remain quiet while their owners had a meal. She recalled how other patrons looked at the group when they got up to leave; many had not noticed the dogs until that moment.

According to another one of Max’s handlers, Pat Ann St. Germain, the director and owner of Healing Hearts Family Counseling Center in Sun Prairie, a lot of the Go Team dogs’ training is about desensitization.

“If we’re called for a crisis, we need to know the dogs aren’t going to be responsive or reactive,” St. Germain said. “… We don’t want to put the dogs in a situation that would be stressful for them. If it’s stressful for them, then they’re not able to do what they need to do as a therapy dog.”

Recently, Max had his fair share of crisis work. He and his handlers were on scene after the gas explosion that rocked Sun Prairie in 2018. According to St. Germain, Max gravitates more toward the first responders at times when there’s a variety of people around.

“It’s very interesting how (the dogs) can sense that people need them,” St. Germain said.

In the meantime, when they’re not offering support to people during emergencies, Go Team dogs provide comfort to seniors and those with disabilities in assisted living facilities, students in area schools and individuals at special functions, like Easter Seals Camp.

While at schools, students who interact with the dogs may have complete attitude shifts upon seeing the animals, according to their handlers. Beamer recalled a student “who barely said four words all school year.” After meeting Max, the student began talking. Both Beamer and Hallett-Kenyon have seen students in tears or during “melt-down mode” regain composure once the dogs are around.

According to St. Germain, who is a licensed counselor, researchers have noticed a decrease in patients’ cortisol levels after interacting with therapy dogs. She said the experiences can also reduce an individual’s adrenaline, causing an increase in oxytocin, which is necessary for social bonding.

“(Students) come in with heightened cortisol and adrenaline levels and if the dogs just pull that down, it means they’re more able to access thinking, logic, reasoning and emotional regulation,” St. Germain said.

According to a study project, “Effects of Animal-Assisted Therapy on a Student with an Emotional/Behavioral Disorder,” by Val Rae M. Boe with Southwest Minnesota State University, research by a professor of nursing and veterinary medicine at the University of Missouri-Columbia found that levels of serotonin become elevated as a result of petting a dog. The same study referenced findings by the American Heart Association in 2005, which found that “animal-assisted therapy can reduce blood pressure in both healthy and hypertensive patients and reduce anxiety in hospitalized patients.” The association’s study also concluded that “even short-term exposure to dogs has beneficial physiological and psychosocial effects.”

While the Go Team therapy dog program requires yearly recertification and handlers must be constantly training their dogs, according to Beamer, the effects the dogs have on people is worthwhile.

“I think the biggest joy I have is watching my dog interact with other people and seeing the changes come across their face,” Beamer said. “No matter how bad a day is, the dogs can just change everything.”

St. Germain shared similar thoughts about what the dogs can offer.

“What the dogs provide is they’re not judgmental and they don’t hold onto things,” St. Germain said. “They love unconditionally. That’s great for our kids who are struggling, to know that no matter what kind of day I have, the dog is going to care for me and provide that emotional support no matter what I’ve done.”