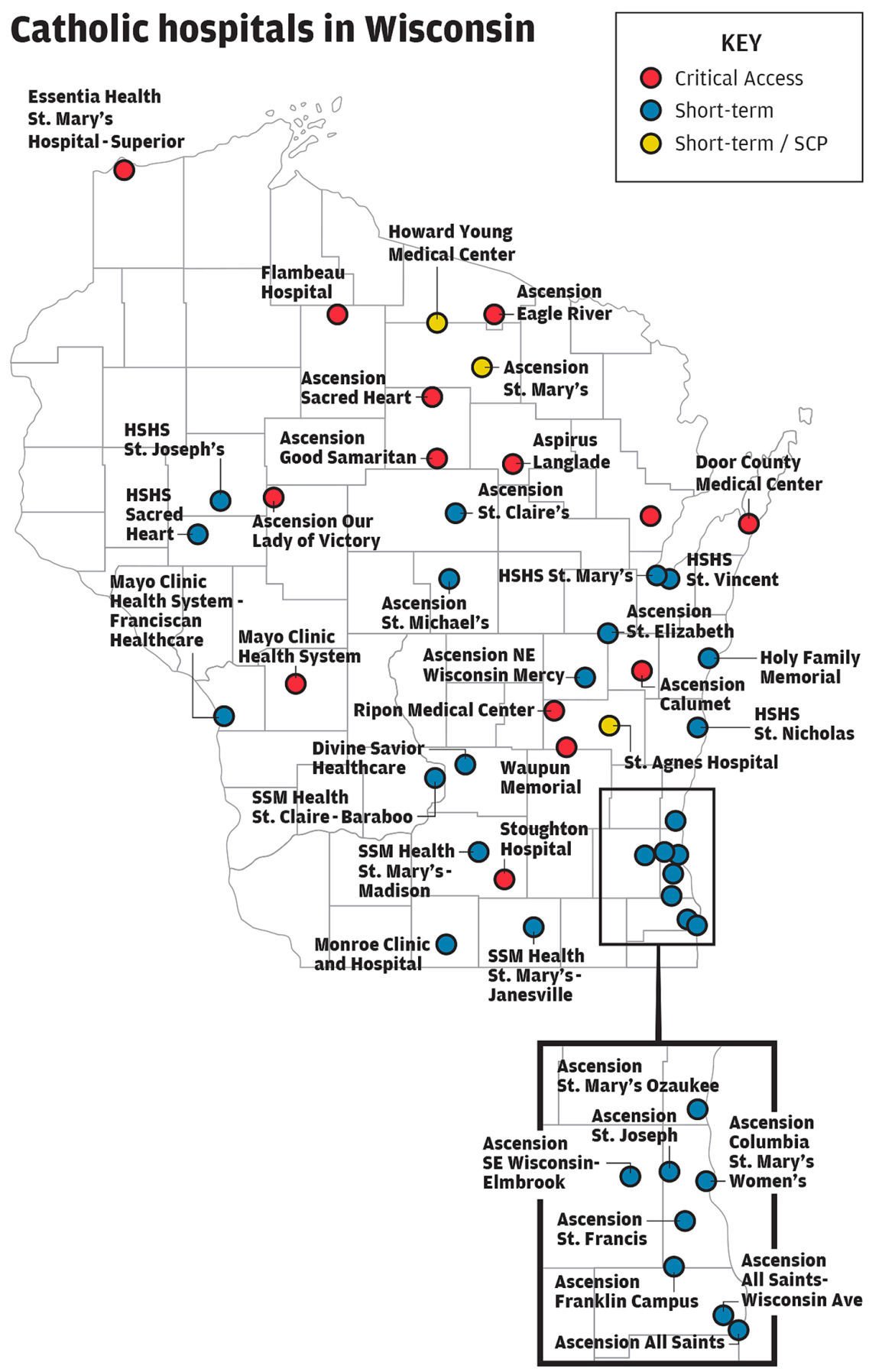 The map shows the hospitals in Wisconsin controlled by Catholics, which means the hospitals follow Ethical and Religious Directives, a set of rules written by the U.S. Conference of Catholic Bishops. 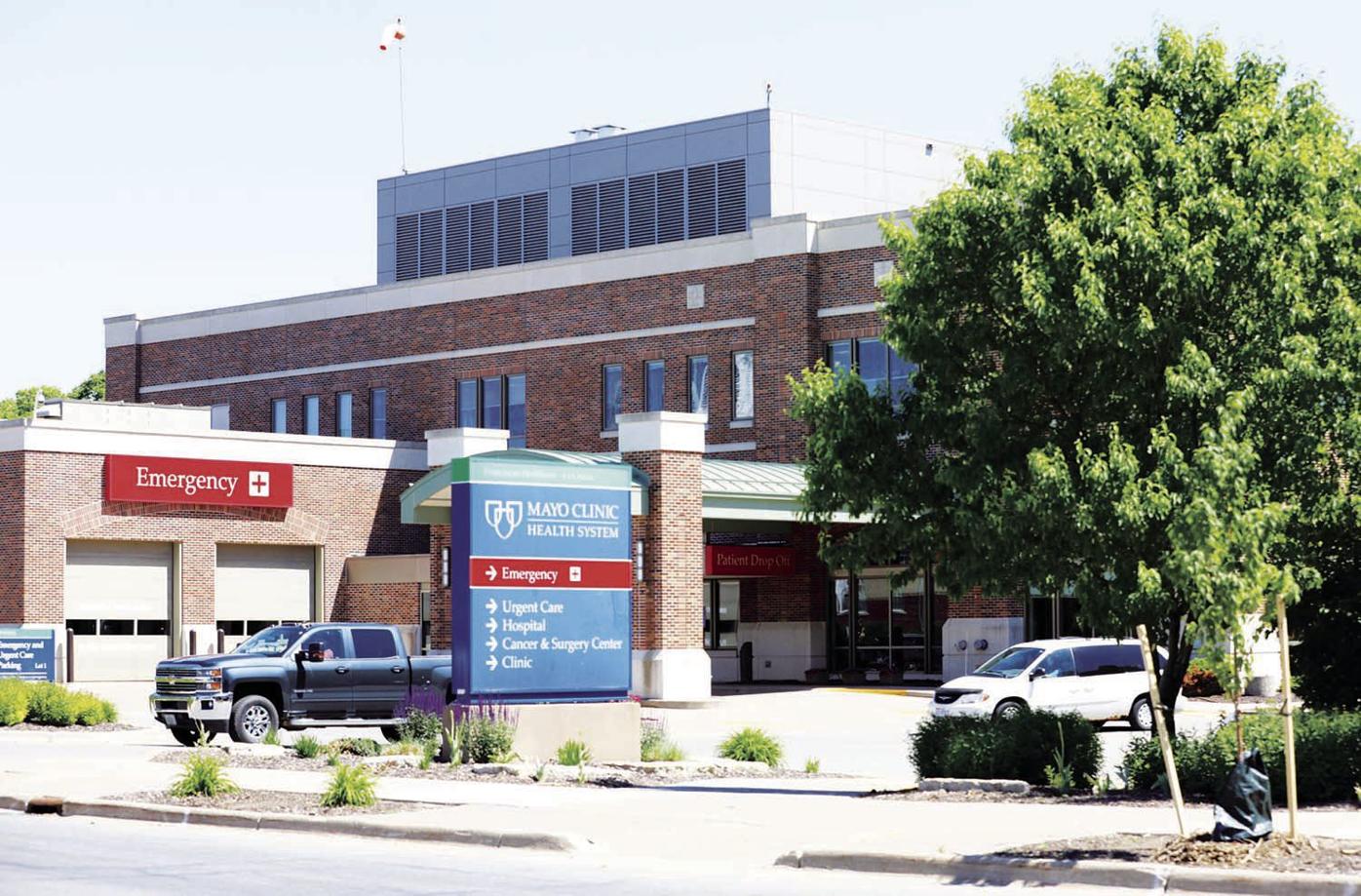 Wisconsin is one of the states that relies most heavily on Catholic hospitals in the United States. Those hospitals include the Mayo Clinic Health System-Franciscan Healthcare hospital in La Crosse. It is one of 40 Catholic-affiliated hospitals in Wisconsin. 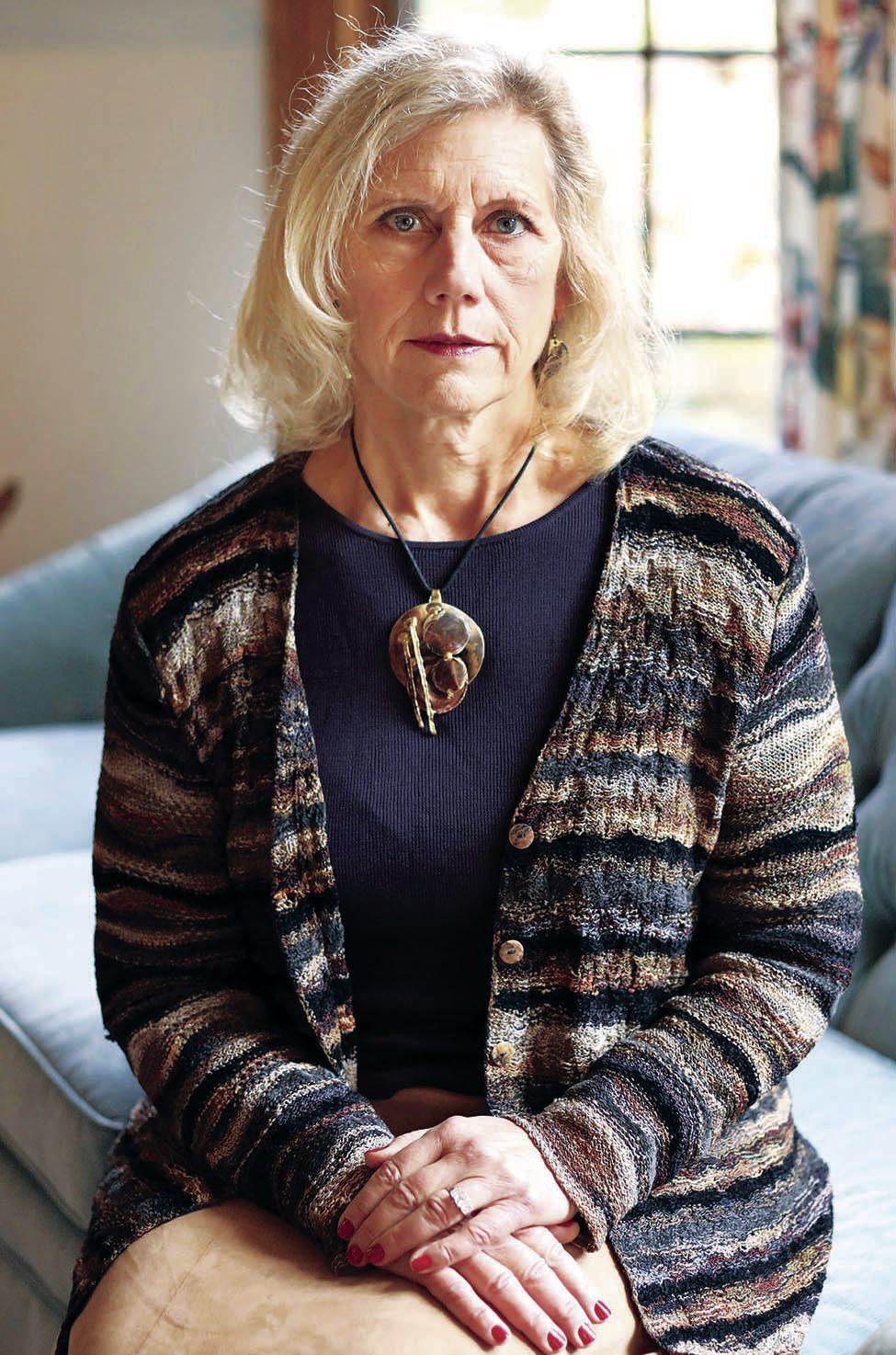 Dr. Kathy Hartke, a retired obstetrician and gynecologist and former chairwoman of the Wisconsin section of the American College of Obstetricians and Gynecologists, says following the Catholic directives when it came to caring for patients sometimes created a “moral conflict … (that) eats away at you.” She is seen in her home in Brookfield, on Dec. 6, 2019.

The map shows the hospitals in Wisconsin controlled by Catholics, which means the hospitals follow Ethical and Religious Directives, a set of rules written by the U.S. Conference of Catholic Bishops.

Wisconsin is one of the states that relies most heavily on Catholic hospitals in the United States. Those hospitals include the Mayo Clinic Health System-Franciscan Healthcare hospital in La Crosse. It is one of 40 Catholic-affiliated hospitals in Wisconsin.

Dr. Kathy Hartke, a retired obstetrician and gynecologist and former chairwoman of the Wisconsin section of the American College of Obstetricians and Gynecologists, says following the Catholic directives when it came to caring for patients sometimes created a “moral conflict … (that) eats away at you.” She is seen in her home in Brookfield, on Dec. 6, 2019.

When Ascension’s St. Joseph Hospital in Milwaukee announced it would cut back services in 2018, residents of the surrounding Sherman Park area protested.

The predominantly black, low-income neighborhood already faced its share of challenges. Nearly a third of residents in the ZIP code live in poverty, and black infants born there are more than twice as likely to die as white infants.

Residents feared that reducing services would exacerbate these disparities, and even pave the way for the hospital to close. St. Joseph’s parent company, Ascension Wisconsin, eventually put the cuts on hold.

But St. Joseph remains the target of a different kind of protest. The hospital is Catholic, which means it follows Ethical and Religious Directives, a set of rules written by the U.S. Conference of Catholic Bishops. The rules prohibit Catholic hospitals, except in extreme situations, from providing procedures the church deems immoral — including abortions, contraception and sterilization. In-vitro fertilization is banned.

Asma Kadri Keeler, a staff attorney at the ACLU of Wisconsin, recently met with members of the St. Joe’s Accountability Coalition, a community group formed after Ascension announced cutbacks. Although most people surveyed by the community group had positive views of St. Joseph, some residents told Keeler they were hesitant to send their pregnant loved ones there.

Keeler said the ACLU works to safeguard religious liberty, but it also has sued when patients were denied care based on religious restrictions.

“We take the position that it (religious liberty) can’t be used to harm other people,” she said.

Catholic health systems argue that they serve as safety nets in impoverished communities and provide the same quality of care as secular hospitals.

In most ways, these Catholic hospitals, which treat one in every seven patients in the United States, differ from secular ones in name only. Yet, critics say, in reproductive care, Catholic ethics can trump medical best practice, bishops can wield more influence than physicians, and patients can be denied care they desire or need.

In Wisconsin, where Catholic Germans and Irish dominated immigration in the mid- to late- 1800s, one-third of hospitals are governed by Catholic religious principles — more than twice the national average.

It is the only state where black women are more likely to deliver their babies in a Catholic institution than a non-Catholic one, Columbia Law School researchers found. And in 12 of Wisconsin’s 72 counties, the only hospitals within the borders are Catholic.

Hospitals are not always transparent about the services they will not provide, and patients often lack a choice of where they seek care, The Cap Times and the Fuller Project found.

Catholic hospitals are governed by 77 directives, which fuse theology with medicine and technology. Several directives cover reproductive care. For example, Catholic-affiliated hospitals will not provide sterilization if the sole purpose is to prevent a woman from becoming pregnant.

And abortion is not permitted, unless it is an “unavoidable” consequence of an action taken to save the mother’s life, according to Brian Reardon, vice president of communications for CHA.

Some physicians provide referrals for abortions and other restricted services or prescribe contraception for menstrual pain rather than birth control. Others adhere strictly to the directives.

SSM Health St. Mary’s Hospital in Madison refers patients seeking a common form of sterilization to undergo the procedure at a nearby eye clinic that does surgeries, according to one doctor and a nurse familiar with the arrangement.

Out of dozens of former and current medical residents, physicians, nurses and midwives in Wisconsin contacted by The Cap Times and the Fuller Project, only one currently practicing physician agreed to speak on the record for this story.

Other currently practicing providers agreed to speak only anonymously because of concerns about negatively affecting their careers or because they had been instructed not to by their employer.

To clarify how Wisconsin’s Catholic hospitals use the directives, The Cap Times and the Fuller Project sent a series of questions to six such hospital systems: Ascension, SSM Health, Hospital Sisters Health System, Divine Savior Healthcare, Essentia Health and Holy Family Memorial. Questions were also sent to Aspirus and Mayo Clinic Health System-Franciscan Healthcare, two non-Catholic health systems that own hospitals that adhere to the ERDs.

None responded individually. However, Nathaniel Blanton Hibner, CHA’s director of ethics, sent a statement on behalf of the organization and Ascension, SSM and Hospital Sisters Health System, clarifying that physicians will prescribe contraceptives for “a variety of underlying medical conditions” and will offer emergency contraception to rape victims.

The full statement can be read here.

Dr. Kathy Hartke worked in Catholic hospitals for 27 years. She recalls a young woman pregnant with twins who arrived at the Catholic hospital in Brookfield, now known as Ascension SE Wisconsin Hospital-Elmbrook Campus. At about 21 weeks, the fetuses had virtually zero chance of survival.

The longer they waited to terminate the pregnancy, the greater the risk the woman’s uterus would become infected, Hartke said.

But at Elmbrook, medical personnel were told they had to wait until the fetuses had no heartbeats.

Hartke recommended the patient be transferred to the secular Waukesha Memorial Hospital, where they could induce labor. But nurses gave the patient the opposite advice.

“Meanwhile, we’re sitting on a possible time bomb of somebody who is going to get very, very sick ... and potentially die,” said Hartke, who has retired from practice.

The patient remained in Hartke’s care, growing sicker in the ensuing days.

She developed sepsis, a life-threatening condition.

Hartke says the patient went into spontaneous labor and was provided antibiotics, which prevented her from growing sicker.

The fetuses did not survive.

Hibner said if a mother is suffering from a life-threatening condition, Catholic hospitals will provide all medically indicated care — even if it results in the death of the child.

The Rev. Charles Bouchard, senior director of theology at CHA, urges doctors to be “proactive” and not “wait until this infection starts.”

But in her experience, Hartke said, “They push it to the last possible second.”

“How is any physician supposed to be able to predict when it’s too late and a woman is going to die?” she asked.

As a medical resident, Dr. Jessika Ralph tried to facilitate an abortion for a patient who became ill after going into premature labor with twins at St. Joseph in 2017.

Ralph, who now works at University of Minnesota Health, said she was forced to wait until the woman hemorrhaged or showed signs of infection to help end the doomed pregnancy.

Ralph eventually induced labor using medication, but was unable to use a particular recommended abortion drug. The ordeal lasted 24 hours, she said, and neither fetus survived.

“While overall I believe these hospitals do provide good obstetric and gynecologic care for women, this unfortunately is a really big gap, and it’s a gap that patients don’t know about,” said Ralph, who also told her story to Rewire.News.

Women delivering by C-section at a secular hospital can ask physicians to tie their fallopian tubes, cut them and cauterize the ends while the abdomen is still open — a procedure that might last just a few minutes.

But at a Catholic hospital, the same woman often must schedule a second surgery at a different hospital to get a tubal ligation.

Researchers have found that nearly half of women who requested to be sterilized but were denied became pregnant within a year.

Hospitals also charge nearly three times more for postpartum tubal ligations than they do for the same procedure done during a C-section, according to a list of procedure costs from Aurora hospitals in Wisconsin.

Said Hartke: “When you have a moral conflict like that, it eats away at you.”

Secular hospitals commonly implant long-acting reversible forms of contraception such as intrauterine devices (IUDs) after a woman gives birth. Physicians from Catholic hospitals told The Cap Times and the Fuller Project they were not allowed to implant IUDs, which provide contraception that can last for years.

Data from the Wisconsin Hospital Association suggest this is largely true. Ascension’s St. Joseph Hospital, for example, billed for an IUD just nine times for the fiscal year ending June 2019, whereas the non-Catholic Froedtert Memorial Lutheran Hospital, less than 5 miles away, did the same more than 1,500 times.

Cami Thomas is a leader of Maroon Calabash, which describes itself as a black radical reproductive justice organization. She said reproductive health care should be about “dignity and consent.”

Thomas recounted going to a Catholic hospital about a decade ago when she was on the brink of death, having lost two-thirds of her blood after her menstrual cycle went on for six months. Her doctor recommended Depo-Provera, an injectable contraceptive, but the hospital’s rules on contraception prohibited it.

Furious, he found a loophole.

“Not all doctors are like that,” she said. “Thank goodness I had that doctor.”

This story was a collaboration between Wisconsin Watch, the Cap Times and Fuller Project, a nonpartisan, nonprofit news outlet that focuses on women’s issues. The nonprofit Wisconsin Watch (www.WisconsinWatch.org) collaborates with Wisconsin Public Radio, Wisconsin Public Television, other news media and the University of Wisconsin-Madison School of Journalism and Mass Communication. All works created, published, posted or disseminated by Wisconsin Watch do not necessarily reflect the views or opinions of UW-Madison or any of its affiliates.