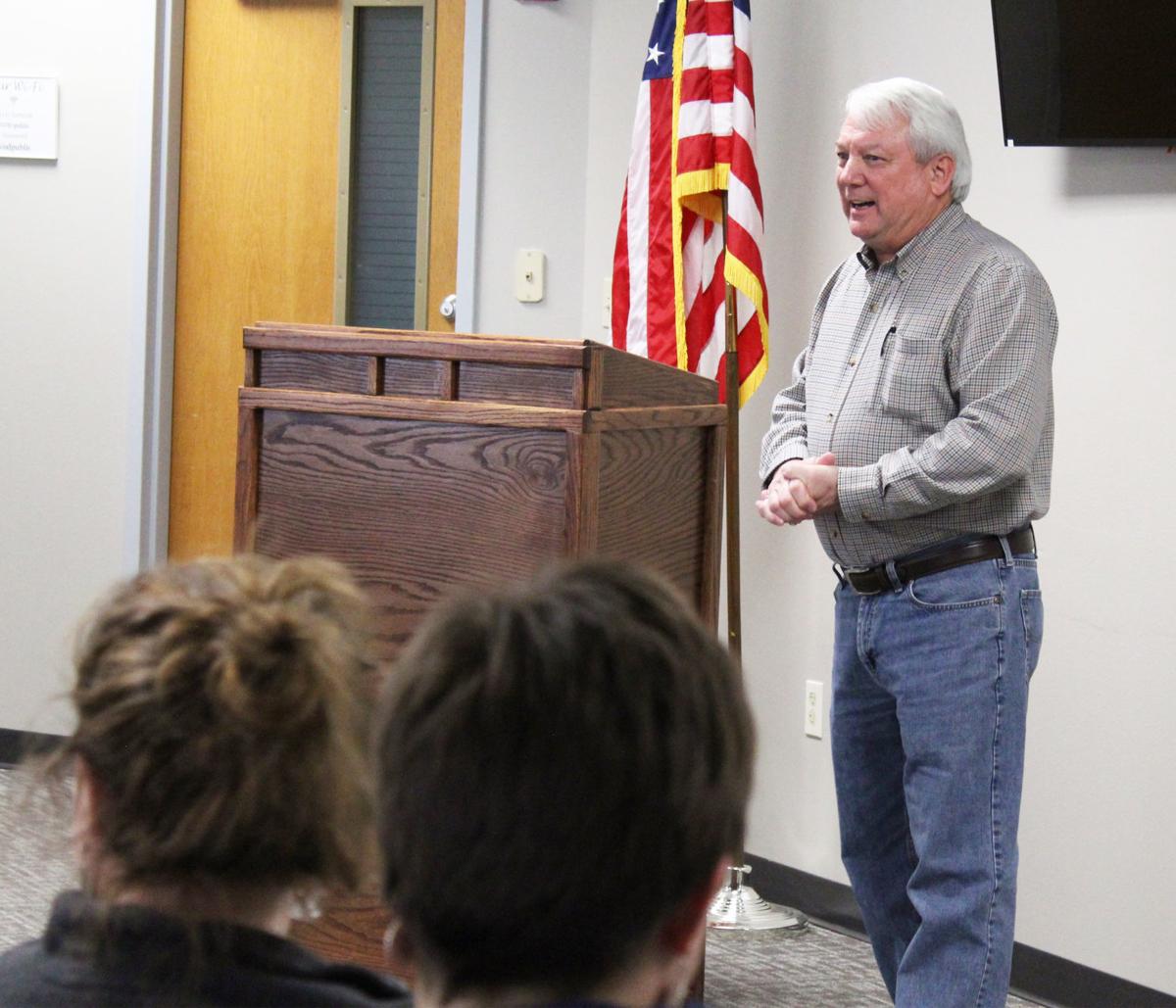 Bob Blankenhagen, who has served as a community social worker through the Joining Forces for Families county-wide program, will retire on Jan. 10. Pictured here: Blankenhagen addresses a crowd of about two dozen people who gathered Monday for his retirement celebration. 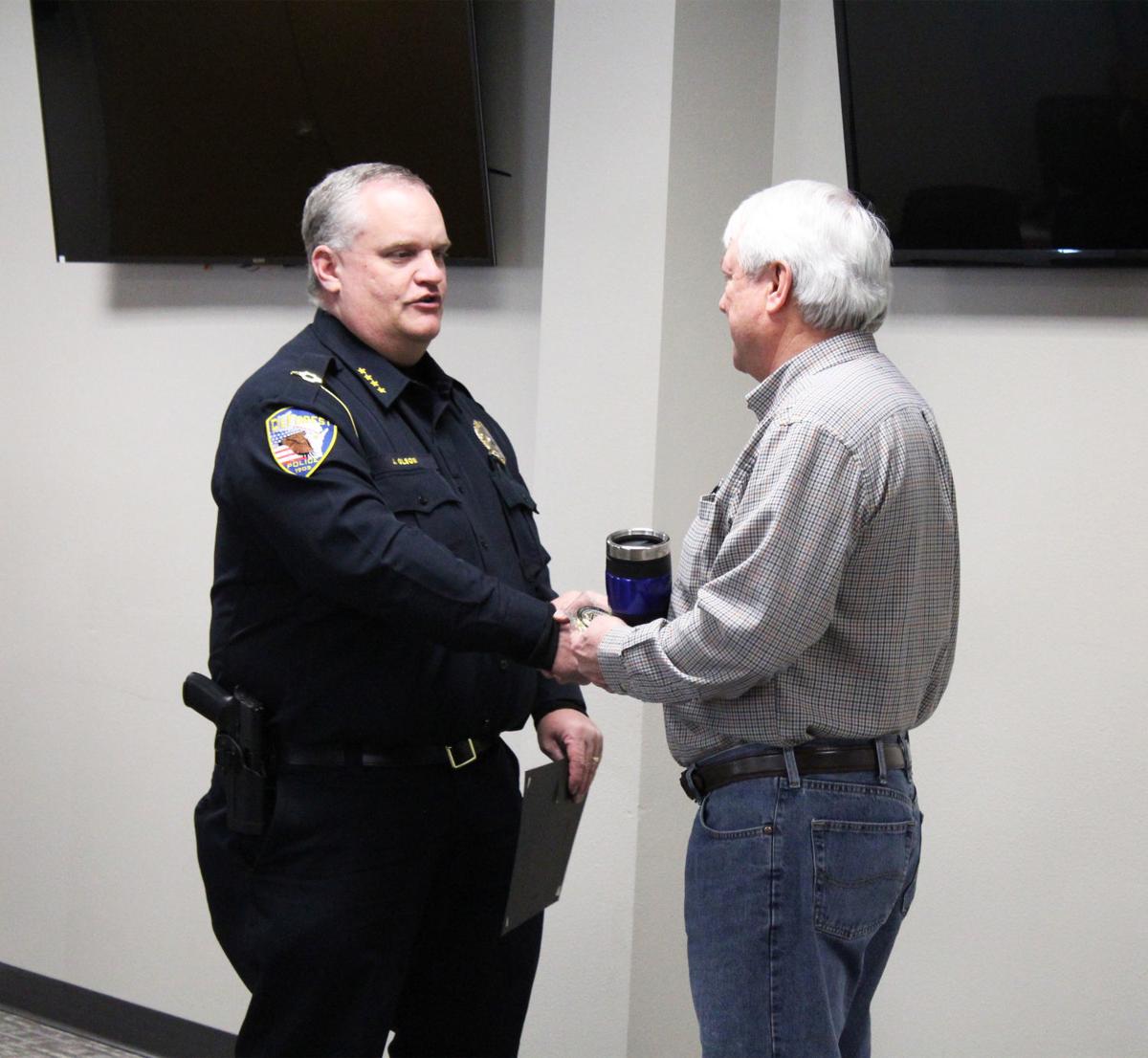 Bob Blankenhagen, who has served as a community social worker through the Joining Forces for Families county-wide program, will retire on Jan. 10. Pictured here: Blankenhagen addresses a crowd of about two dozen people who gathered Monday for his retirement celebration.

Blankenhagen, who has worked for Dane County since 1979 in various roles, will leave his post as part of the Joining Forces for Families (JFF) program on Friday. He’s been working out of the DeForest Police Department office for years, making referrals to assist local families and performing early interventions in situations that could eventually involve the court system.

“I found it intriguing working with youth at the time and had high hopes in making a difference in their lives,” Blankenhagen said.

Several years later, he moved on to work for the county’s human services department, which ultimately led him to his current job. Since 1994, Blankenhagen has worked as a community social worker through the JFF initiative, which aims to address basic and personal needs of families, as well as support efforts to make areas safer and healthier places.

Since 2001, Blankenhagen has been splitting his JFF time between those living in the DeForest and Waunakee school districts. On any given day, Blankenhagen could be interacting with a parent worried about their child’s dependence on drugs or alcohol, or connecting with a senior looking for housing. According to him, there was never a way to know what would come up throughout the day.

“(The JFF program) is almost dictated by the community or neighborhood the office is in,” Blankenhagen said. “We try to keep an open-door policy, so we never really know what issues are going to be brought to us as people walk through the door.”

Although a community social worker like Blankenhagen might not have all the answers for people right away, he said they do their best to be as helpful as possible and connect individuals with additional resources when needed.

Over the years, Blankenhagen has seen an increase in housing instability. He said while the county is attracting new businesses, it leads to a need for more employees, but oftentimes people are unable to find housing nearby.

“DeForest is just a microcosm of the overall housing problem,” Blankenhagen said, explaining he thinks it’s an issue across southern Wisconsin.

Over the course of his time spent in DeForest, Blankenhagen also got involved with the DeForest Area Needs Network (DANN), which began after a proposal by local clergy.

“They noticed that families were in need of financial assistance to help them over what I call a ‘financial speedbump,’” Blankenhagen said. “I became involved with representatives with a lot of the churches in the area to develop a way to work on that issue.”

DANN, a 501(c)(3) non-profit, aims to help residents with financial issues, assisting them with funds for things like rent, utilities, car repairs and medication co-pays through community donations. The organization has been around for 22 years and is just shy of having received $750,000 in donations in that time, according to Blankenhagen.

The group also partners with the DeForest Area School District and local churches, businesses and organizations on a holiday giving program each year. According to Blankenhagen, the effort provided gifts to about 130 families this past holiday season.

“DeForest isn’t a large town, but I’ve found it phenomenal over the years of how giving the community is and how supportive they are,” Blankenhagen said. “We always talk about neighbors helping neighbors and they do a tremendous job in this community doing that.”

After his last day on Jan. 10, Blankenhagen plans to travel with his wife, spend more time with his grandchildren and help out his parents and mother-in-law during retirement. While a successor for Blankenhagen has not yet been named, he anticipates the next individual in the area’s community social worker role will take over his duties with DANN.

Blankenhagen expressed his gratitude for the community’s support and responsiveness over the years. He also extended his thanks to the village of DeForest and its police department for giving him an office in the public safety building, as well as to the DeForest Area Public Library’s staff, who never turned him away when he needed space for a program.

“It’s a little sad to go, but at the same time, I’m thrilled at the new possibilities,” Blankenhagen said. “After you work for such a long time, you wonder how you’re going to fill up the time, but there’s a lot of things to do out there.”