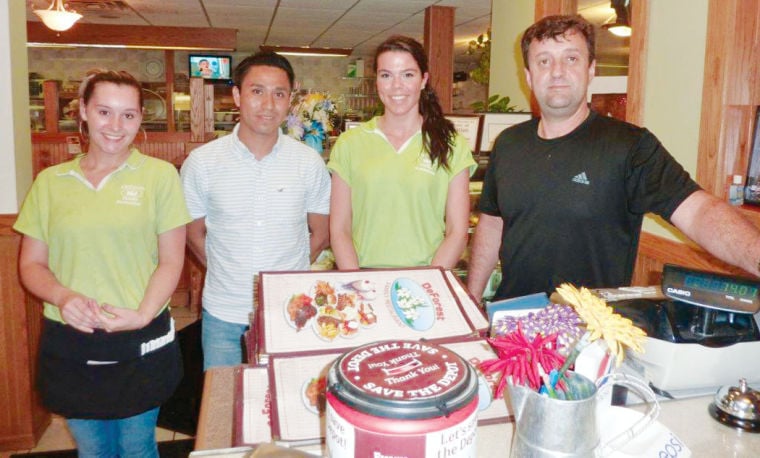 Pictured are the employees of DeForest Family Restaurant, 505 W. North St., DeFortest. They are, left to right, Mira, Elias and Lauresha with owner Jack Amiti. The restaurant is open 365 days a year to serve you. 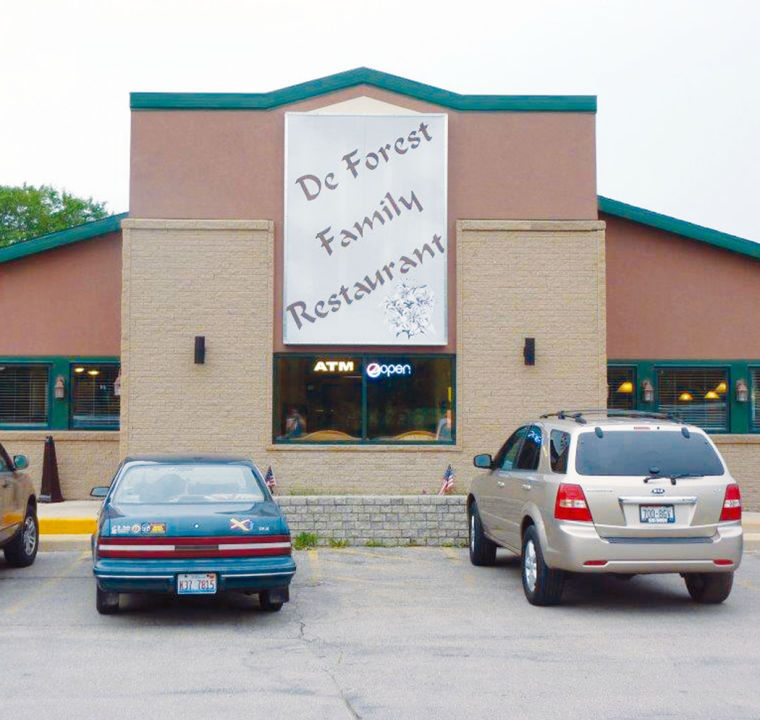 The DeForest Family Restaurant is at 505 W. North St., DeForest.

Pictured are the employees of DeForest Family Restaurant, 505 W. North St., DeFortest. They are, left to right, Mira, Elias and Lauresha with owner Jack Amiti. The restaurant is open 365 days a year to serve you.

The DeForest Family Restaurant is at 505 W. North St., DeForest.

Are you hungry for a fluffy, Chicago-style omelet? How about ribs or broasted chicken? Or would you like a juicy burger and cheese curds?

At the DeForest Family Restaurant, 505 W. North St., DeForest, you can order pretty much anything you want.

The 10-page menu features more than 200 items, ranging from appetizers, salads, burgers and sandwiches to steaks and chops, Italian selections and seafood — along with daily dinner specials. Three whole pages of the menu are devoted to breakfast favorites, such as omelets, biscuits and gravy, buttermilk pancakes, French toast, skillets and burritos.

This modern, relaxed-atmosphere diner truly has something for every member of the family.

According to owner, Jack Amiti, and his wife, Kiki, food quality and freshness will never be compromised and excellence is demanded in all they do. The Amitis purchased the restaurant in 1999.

In search of a better life and advanced education, Jack Amiti moved to the United States from the former Yugoslavia, now Macedonia, when he was 16-years-old. He went to work at The Red Apple restaurant in Monroe.

For five years, he learned the ins and outs of the restaurant business.

“I started as a dishwasher,” Amiti said. “But, over the years, I ended up doing a little bit of everything.”

Amiti later moved to Wausau where he worked as a kitchen chef at the Tri City Family Restaurant.

On a visit back to Monroe, Amiti stopped into The Red Apple to see his former employers, Jimmy and Jay Rushiti. The Rushiti brothers had purchased the DeForest Family Restaurant but had closed its doors. They asked if Amiti would be interested in purchasing the restaurant.

Amiti checked it out and liked the location and community.

The DeForest Family Restaurant had previously been owned by the Torgersons for more than 30 years. It had once been a successful community staple, and Amiti felt he could bring it alive again.

He purchased the restaurant, fixed it up, hired 12 employees and opened the doors in August 1999.

“It was a big risk, but the DeForest community supports the restaurant well,” Amiti said.

The restaurant originally had 50 seats but, after a couple of additions, now has a 120-seat capacity.

Being new to the community back then, Amiti had to prove himself as a stable, trustworthy employer.

“I had to build trust so parents would allow their kids to work here,” Amiti said.

He said it is a good job for students, but he pushes them to continue their educations at the same time.

“Whoever works for me, I want them to be something more,” he said. “I want them to take advantage of their opportunities for advanced education.”

Amiti felt he had no opportunities in Yugoslavia. He came to the United States with the intention of getting a better education, but never had the financial means.

Instead, he has succeeded through long hours of hard work. Running the restaurant takes up most of his time.

“I’m always working for the restaurant, even when I’m not here,” Amiti said.

He admits it’s hard on his family life. His wife and children, Andi and Aldrina, ages 7 and 10, come and visit him at the restaurant whenever possible.

His hard work has paid off. The DeForest Family Restaurant has stood the test of time in a community where other restaurants have come and gone. He has many regular patrons and many new ones each day.

Amiti has made additional building renovations twice in his 14 years of ownership.

The latest renovations took place a few years ago when smoking was banned in restaurants in Dane County.

“We added onto the front of the building, took out the smoking section, and purchased new furniture,” Amiti said.

The restaurant is open 6 a.m. to 9 p.m. every day of the year, even holidays.

“More and more people would rather go out for holiday meals than spend all day cooking,” Amiti said.

He offers traditional favorites for the holidays, as well as regular menu selections.

The wide variety of menu items has helped make the restaurant successful.

“I started with basically the same menu I’d used at the last restaurant because I knew it worked,” Amiti said.

He has added to it during the years, as well. Popular favorites include the omelets, ribs, broasted chicken, skillet items, gyros, cheese curds and the daily specials.

And pies are a big draw, too. On a typical day, the restaurant offers more than 20 different kinds of fresh pie.

Average meals are less than $10 per person. The restaurant offers kids meals and senior citizen portions, too.

“It is hard work to make sure both the food and service are right every time,” Amiti said.

He tries to get to know his customers, and has a good mix of local guests and interstate travelers.

“We focus on good customer service,” Amiti said. “It’s the only way to survive for 14 years in this business.”

Amiti and his staff are quick to greet guests with a welcoming hello and smile. He coaches his workers to please everybody to the best of their ability, to basically treat others how they want to be treated.

Waitressing at DeForest Family Restaurant was Ashley Pilarowski’s first job. She started there when she was 14-years-old and worked through high school. Now grown up with a family and career elsewhere, she still helps out at the restaurant when Jack needs an extra hand.

“A lot of the same customers come here over the years,” Pilarowski of DeForest said. “I have gotten to know families whose kids were little when I started and now they are teenagers. It’s really fun to come back and see familiar faces.”

Pilarowski says she learned a good work ethic from Jack.

“He always expected you to be here and to do your job because there was work to be done,” she said. “Jack is a hard worker and expects the same from his employees.”

Employee Vickie Maggio started waitressing at the DeForest Family Restaurant 12 years ago. And what does she like best about her job that has kept her there so long?

“It’s absolutely the customers,” Maggio said. “You get to know people from all walks of life.”

She says the restaurant has an upbeat, happy atmosphere.

“We know all the regulars by name,” she said. “They come in for a smile and to relax.”

“I want my customers to know they are important and I care about them and what’s going on in their lives,” she said.

Maggio wants each customer to have a pleasant experience and to leave with a smile.

Amiti agrees that all customers should leave satisfied. He believes in setting a good example to his employees by working all jobs as needed and putting in more hours than anyone.

The DeForest Family Restaurant is his livelihood, his passion.

He enjoys the DeForest community and shows his gratitude to his patrons through thousands of dollars in local donations each year.

“This is a nice town to raise kids,” he said. “It’s quiet, but close to Madison when you want more action.”

But for locals and those passing through town, there is no need to leave DeForest to find a family-friendly restaurant with tasty, home-cooked meals. The DeForest Family Restaurant offers a huge selection of menu items to make your entire family happy and full.

To view the complete menu, visit the restaurant in person or go to www.deforestfamilyrestaurant.com. For reservations or take-out, call (608) 846-6910.