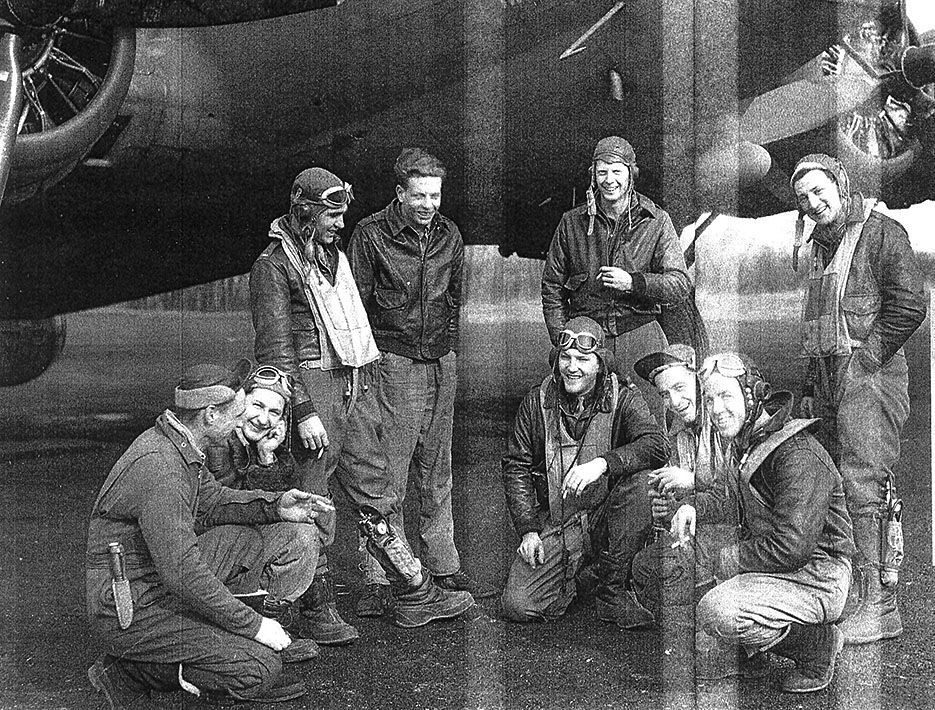 James Robert Byrd (bottom left), the father of DeForest’s James “Mike” Byrd, crouches with a cigarette in his hand while hanging out with his World War II squadron in 1942. The knife at his side was what he used to fend off a German soldier after bailing out of a B-17 over Germany. 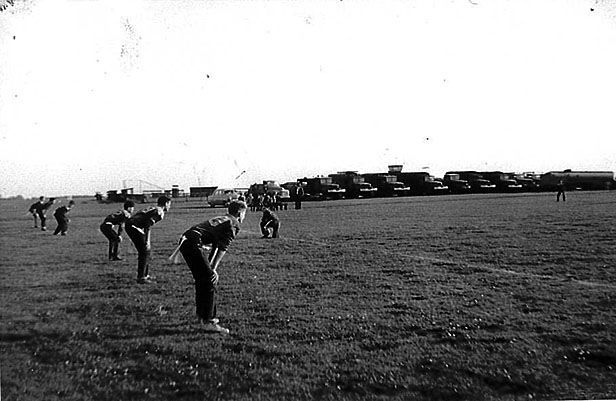 James “Mike” Byrd is lined up with teammates of his junior high school football team in 1958 on a field at Royal Air Force Bentwaters, a former RAF station around 80 miles northeast of London. 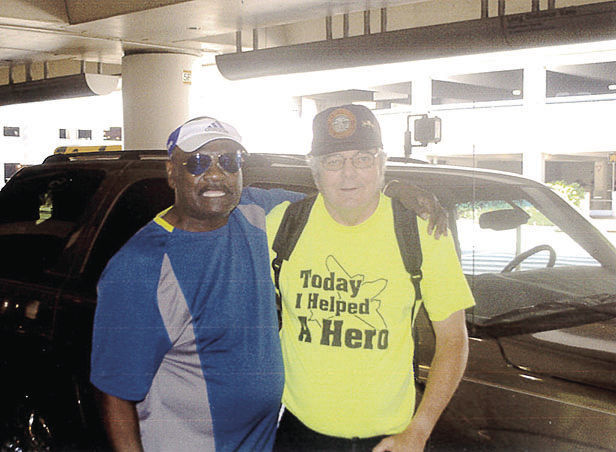 James Robert Byrd (bottom left), the father of DeForest’s James “Mike” Byrd, crouches with a cigarette in his hand while hanging out with his World War II squadron in 1942. The knife at his side was what he used to fend off a German soldier after bailing out of a B-17 over Germany.

James “Mike” Byrd is lined up with teammates of his junior high school football team in 1958 on a field at Royal Air Force Bentwaters, a former RAF station around 80 miles northeast of London.

James “Mike” Byrd, of DeForest, survived the polio scare of the 1950s and an undiagnosed blood disease as a youngster that had doctors baffled.

His dad, James Robert Byrd, was a World War II veteran, who made it through the bombing of Pearl Harbor and the Korean War.

“He was landing in an unarmed B-17,” said “Mike” Byrd. “When it stopped, he jumped out and ran into the grass by the landing strip and rolled over on his back.”

A bomb hit the top turret of the plane at Hickam Field, as his dad, a jet mechanic, watched. After 26 years in the Air Force, James Robert Byrd retired June 30, 1966.

By then, he had moved his family to DeForest. Mike Byrd’s dad died in 1984. He’s in the process of publishing a book about his father’s Air Force experiences.

Both men had to overcome challenges, the military man having lived through war and his son conquering a myriad of health problems.

Mike Byrd’s dad, James, made it through two wars. The bombing of Pearl Harbor was his initiation.

“He talked a little of it,” said Byrd. “He came about a hundred yards from not being here.”

Eventually, his father received a nuclear arms classification. Byrd remembers that allowed him to move around the base easily. When stopped by military police, he would say his name was Byrd and move on.

“Everybody knew my dad,” said Byrd. “He had top nuclear clearance.”

Byrd wrote a first book about his four years in England, living on an Air Force Base. It’s called “My Son, The Brat.” It follows Byrd’s boyhood adventures and misadventures in the 1950s after his father was transferred to Bentwaters and Woodbridge RAF Base near Felixstowe, England. The family left England on June 11, 1959, having spent exactly four years in the country.

In World War II, Byrd’s father was part of 143 missions over Germany, resulting in the shooting down of 47 German planes. He flew all over Europe, according to his son, and was part of the Berlin airlift, flying from six to eight airbases outside of Berlin. He said his dad sat up front with the pilots and would see Russian airplanes take off on their routes. There was one time, Byrd said, when his dad waved to a Russian pilot, and that pilot waved back.

Byrd said his father had to bail out of three different B-17s in Germany, France and the Netherlands. He was never captured as a prisoner of war. In fact, Byrd said his dad once had to use his knife to fight off a German soldier who had found his hiding place in a barn.

Knowing that no one would believe his story, his dad cut off the German soldier’s arm band.

After WWII, Byrd’s dad served in the Korean War, but he wasn’t in the Vietnam War. The Byrd family spent exactly four years in England, ending their stay there June 11, 1959, the year they moved to DeForest. There was also one year of temporary duty in Morocco, where his dad helped maintain a whole squadron of new F-100s.

While living in DeForest, Byrd’s dad worked at Truax Field in Madison. He stayed in the Air Force 26 years.

James “Mike” Byrd believes his story can be a source of inspiration as local residents and the world at large are dealing with the COVID-19 pandemic. He contracted the blood disease in 1952, when he and his family were living in Houston, where his dad was stationed at Ellington Air Force Base.

Doctors discovered the issue when Byrd was in first grade and ran “oodles of tests,” he said. Still, they were never able to figure it out, as Byrd missed most of first grade and had to go to summer school, although he admits he didn’t go much. He was playing baseball instead.

“I don’t know for sure what it was, but it was the beginning of my cholesterol trouble,” said Byrd, who was born in an old coal miner’s house in England, when his dad was stationed there. “I went into the doctor’s office and they said I better not stop moving around because doctors said my cholesterol was so high.”

At the end of 1952, the testing stopped. Polio had become a bigger issue. Byrd endured his share of polio shots, and he never got it. That year, Byrd had his first operation on his club feet, having been born with them. The doctor said he’d never walk right, according to Byrd.

However, despite his club feet, Byrd was active as a youngster, playing football, baseball and softball. In fact, Byrd played football under Woodrow “Dutch” Stalder at DeForest Area High School, who was head coach of the Norskies until 1967. The high school football field is named after Stalder, who gave Byrd the nickname “The Admiral,” after Admiral Richard E. Byrd.

Byrd’s mother was concerned that his club feet would lead to him getting injured.

“But, I never got hurt with that, but I did get knocked out, so I had a concussion and a broken thumb,” said Byrd.

Byrd attended high school in DeForest between 1960-1964. Two years after graduating, Byrd went to see his doctor in Houston that performed the surgery on his feet.

“I showed him all my football letters, baseball trophies and awards, and he said, ‘Mike, you really fooled me,’” said Byrd, with a laugh.

Byrd wanted to go into military service after high school. He tried to get on a bus to Milwaukee to get a physical. He was not allowed on because he didn’t have his papers.

Then, after a car accident in DeForest, Byrd hurt his back. His girlfriend Carol, who became his wife of 53 years, brought him a letter from the draft board. It indicated he was 4-F, meaning he was unable to join the Armed Forces.

“I was crying pretty good,” said Byrd. “She gave me a big hug and a kiss.”

With service in the Armed Forces ruled out, Byrd went to Madison Area Technical College and then attended college in Chicago, but left to go to work at Demco in DeForest for 29 years. He was a guillotine operator. Byrd was also an EMT for 22 years in Waunakee.

The week of the 9/11 tragedy, Byrd had to go to the hospital for his first open-heart surgery. He had five bypasses put in. In 2002, he had three stents put in, and then in 2003, Byrd had three more bypasses done. He’s had a total of eight.

Byrd has two sons, Jim and John. The oldest son is a groundskeeper at DeForest Area High School, and another become a firefighter, first working in Fitchburg and then in Madison.

As for the coronavirus pandemic, Byrd thinks that as long as everybody does what they’re supposed to do, we’ll get through it. He said people should be listening to what Gov. Tony Evers and President Trump are saying, especially about quarantining, and he thinks there will be a vaccine in about a year. Byrd sees parallels between this pandemic and the search for a polio vaccine. Having lived through the polio nightmare, he’s hoping a coronavirus vaccine can be discovered soon “because it’s going to save lives, and it’s going to take the medical field a long way,” said Byrd. “It would help everybody in the world. Polio was a very bad thing, and I wouldn’t want to go through that whole thing again.”