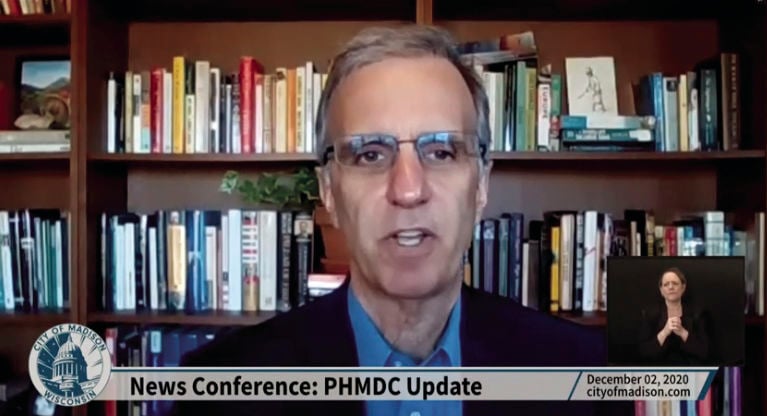 Joe Parisi at a news conference with an update on COVID-19 from Public Health Madison and Dane County. 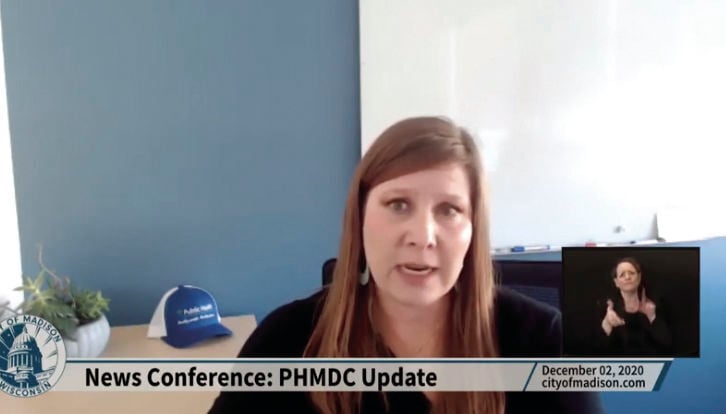 Just one day after Wisconsin Assembly Republicans released a proposed response to the COVID-19 pandemic, Public Health Madison and Dane County revealed health officials had recorded the highest number of deaths from the virus for the day.

“We grieve the loss of these people in our community and send our condolences to their family and friends. We need to slow the spread of COVID-19, so we don’t have another record month of deaths in December or January or any month in the future,” Heinrich said.

“Our rate is currently mirroring a national rate while Wisconsin as whole is nearly double that rate,” Heinrich said.

The case counts continue to test the public health system and strain hospitals, she added.

High levels of COVID-19 continue impact on staffing levels, and hospitals are still caring for more than 100 people every day who are hospitalized with COVID-19, Heinrich said.

Dane County’s current health orders limiting outdoor gatherings to 10 and prohibiting all indoor gatherings with those outside of one’s household will be in effect until Dec. 16, Heinrich said. Public health officials will take into consideration case counts and hospital functions as they release updated orders afterwards at that time.

Public health officials hope the case counts continue to decline, Heinrich said, but added they are bracing for the “the likely reality” of another surge from the Thanksgiving weekend.

While a vaccine likely to receive emergency approval soon is hopeful, Parisi said, hospitals and emergency rooms are stretched beyond their limit, and the public’s help is needed to contain the spread.

Parisi called this the “worst of the pandemic,” adding it will likely “get even worse before it gets better” as the Thanksgiving surge begins to impact local hospitals. The strain has impacted health care workers’ capabilities to respond to and treat other life-threatening emergencies, he said.

“Until a vaccine is available, our public health orders and guidelines will remain our best resources for reducing suffering and death caused by this virus,” Parisi said.

He thanked those who have made sacrifices and changed their routines as a response to the virus.

“Many have suffered both emotionally and financially. But the only way for us to avoid even more illness and death is for us all to remain vigilant until a vaccine is rolled out and our numbers once again begin to decline,” Parisi added.

The county executive went on to address the COVID-19 response proposed by Assembly Majority Speaker Robin Vos and Republicans in the Legislature, saying it undermines the county’s ability to protect residents.

He said he would ask Speaker Vos how the plan would prevent people from getting sick or reduce the crush of patients in the state’s hospitals.

“One of the most egregious parts of this proposal would have politicians rather than health care professionals decide who receives the vaccine,” Parisi added.

Dane County will continue to look to public health officials, not politicians, for health care guidance, he said.

It would prohibit a mandate requiring individuals to receive the vaccine and any orders on public gatherings in churches.

The order would also require all teachers to return for in-person learning on Jan. 31 and reduce school aid for districts that do not comply.

“This isn’t really a plan…that addresses the root causes and need to try to get back out in front of this virus. It puts more bureaucracy in place,” Parisi said.

While Parisi said it provides additional funding for contact tracers, nothing in it relies on healthcare professionals or helps them do their job.

“We need them to allow the governor and his teams to do the job they were elected to do, to protect the people of the state of Wisconsin rather than trying to strip their power to act, rather than literally supporting lawsuits to strike down proven strategies to address the virus,” Parisi said.