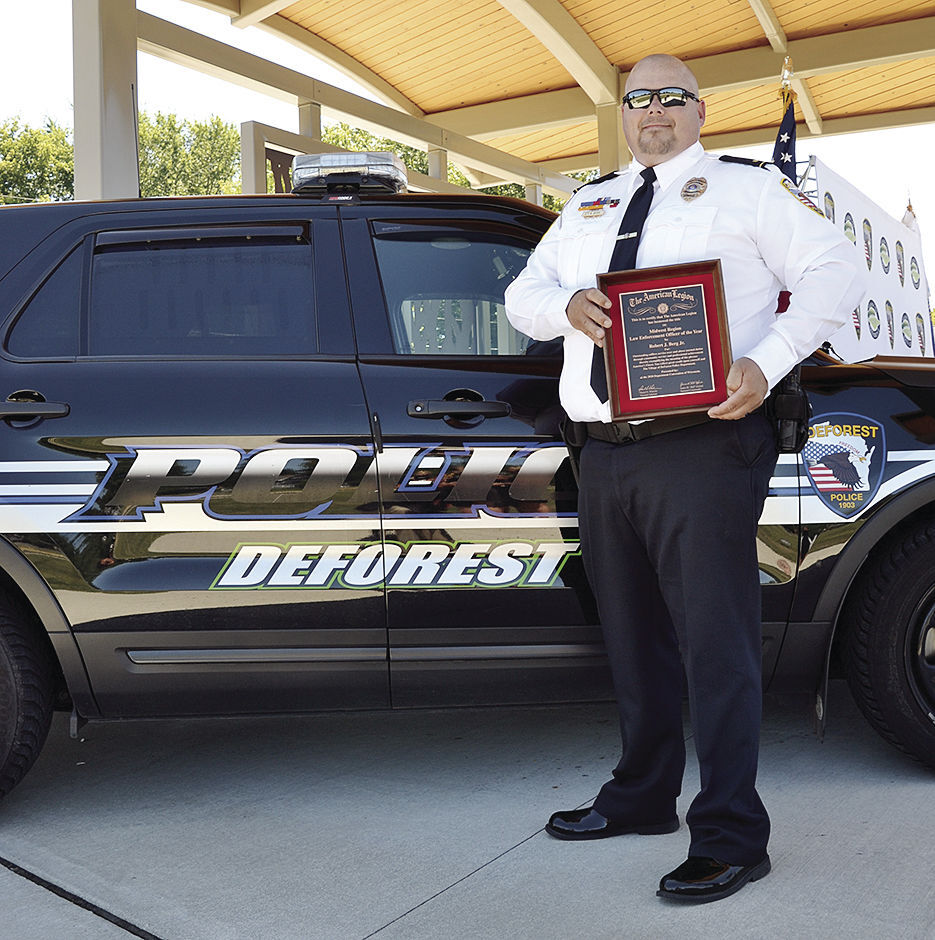 Lieutenant Robert Berg, of the Village of DeForest Police Department, stands next to a patrol car with his award as the American Legion’s National Law Enforcement Officer of the Year after a ceremony honoring him on Aug. 11 at Firemen’s Park in DeForest. 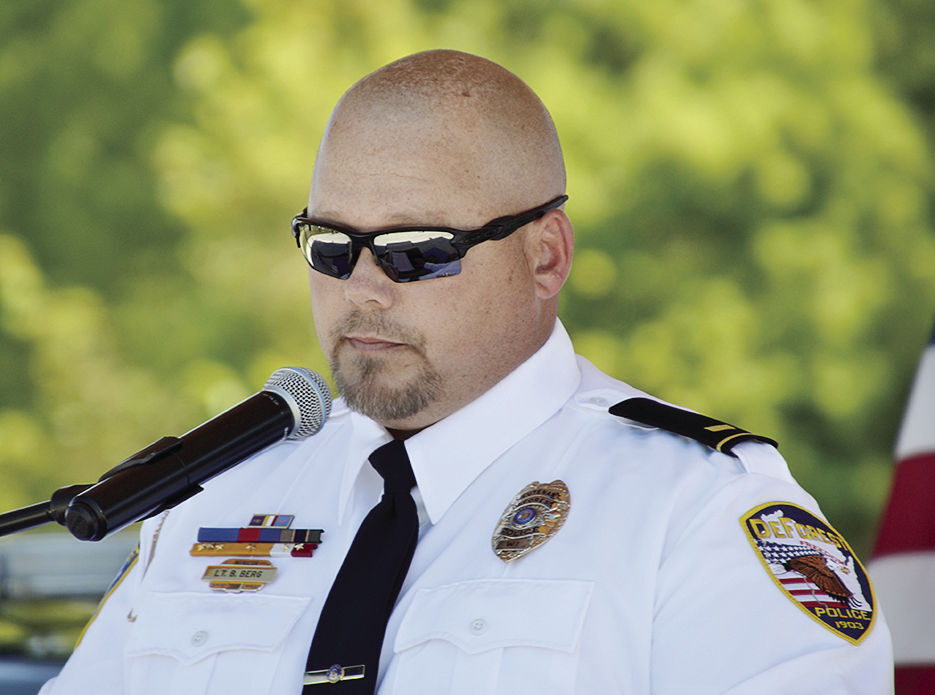 Lieutenant Bob Berg, of the Village of DeForest Police Department, speaks at ceremony held Aug. 11 to honor him at the American Legion National Law Enforcement Officer of the Year.

Lieutenant Robert Berg, of the Village of DeForest Police Department, stands next to a patrol car with his award as the American Legion’s National Law Enforcement Officer of the Year after a ceremony honoring him on Aug. 11 at Firemen’s Park in DeForest.

Lieutenant Bob Berg, of the Village of DeForest Police Department, speaks at ceremony held Aug. 11 to honor him at the American Legion National Law Enforcement Officer of the Year.

A pat on the back is nice every now and then.

Lt. Bob Berg, of the Village of DeForest Police Department, received a bigger recognition of his police work recently, when he was chosen as the National Law Enforcement Officer of the Year by the American Legion.

“I am truly humbled and honored,” said Lt. Berg, who was recognized for the achievement at a ceremony in Fireman’s Park in DeForest on Aug. 11. “It’s a prestigious honor. At the end of the day, I’ve never been in it for accolades … it allows us together to reflect on what we have in DeForest.”

Berg said the award shines a light on the good work done by police in DeForest.

“I work with some of the best women and men law enforcement has to offer,” said Berg.

Berg has been with the DeForest Police Department since 2008. Previously, he worked as a part-time officer with the City of Jefferson and the Village of Johnson Creek, after his military service was over.

At age 18, Berg enlisted in the U.S. Army right after finishing high school. He graduated from basic training in the top 1 percent of his troop, out of 125 soldiers. Berg also received the Excellence in Recon and Leadership awards and was promoted to Sergeant.

After completing his first full military commitment, Berg, who is originally from Fort Atkinson, returned to Wisconsin and enrolled in the University of Wisconsin-Platteville’s criminal justice program.

During his first year of college, Berg was recalled to the Army in support of Operation Iraqi Freedom and reported to Forward Operating Base O’Ryan near Ballad, Iraq, with the Wisconsin’s Army National Guard’s 32nd Infantry Brigade Combat Team.

For the next 15 months, Berg was in combat, living through small and large arms fire, improvised explosive devices and mortar and rocket attacks. Berg earned two combat service stripes and numerous awards, citations, commendations and decorations. He was his platoon’s sniper noncommissioned officer.

With nine junior comrades under his charge, all 10 of them – including Berg – returned home safely. Berg was then hired by the City of Jefferson Police Department and sent to the Police Academy at Blackhawk Technical College, where his classmates elected him as class leader and he graduated No. 1 in his class.

An honor graduate, Berg was the recipient of the Terry Fell Leadership Award.

Nine months after being hired by DeForest, Berg earned the role of firearms instructor. Soon, Berg acquired additional roles in areas such as tactics, standard field sobriety, less lethal and active shooter instructor, the first in the history of the department.

In October 2011, Berg was named as an investigator, before being promoted to detective sergeant a year later to lead the investigations division of the department.

Among the heroic acts he’s performed with the DeForest Police Department, Berg has earned two lifesaving awards, while also getting decorated with his fourth department commendation after defusing a tense armed standoff in January 2018. Four years earlier, after receiving a distress call from Australia, Berg launched an investigation that led to the recovery of an adult female and mother and son who were being falsely imprisoned by a heroin addicted father/husband.

Berg’s recognition as the American Legion National Law Enforcement Officer of the Year came after a series of steps, after winning at the local, district and state levels. Berg said Jeff Unger, of the Olson-Grinde-O’Donnell Post #348 in DeForest, did a good job of helping him get to those heights, even though, in his humble opinion, Berg thinks others in his own department are just as worthy of the honor, if not more so.

“There’s nothing special about me,” said Berg. “There are better, more well-deserving officers in this department.”

The American Legion certainly sees Berg as special, as he was chosen out of some 800,000 police officers across the country. Berg is a member of the Olson-Grinde-O’Donnell Post #348 in DeForest and could be the first combat veteran to ever win the award. Berg is the first American Legion Department of Wisconsin nominee to capture the award in more than 20 years.

When he won at the state level, Berg said, “I was just taken aback.”

Now that he’s been recognized nationally, Berg just wants to get back to doing what he loves. With the onset of the COVID-19 pandemic, Berg said he’s become more focused on the better of the community. His various efforts at community engagement throughout his career suggest he’s been doing that all along.

“I just do my job here for the community, so that people can move freely and live happily,” said Berg, “and if they are the unfortunate victim of a crime, I’ll do my darndest to give them closure.”