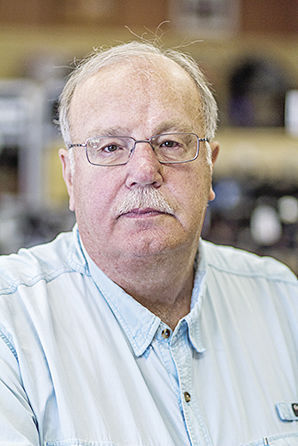 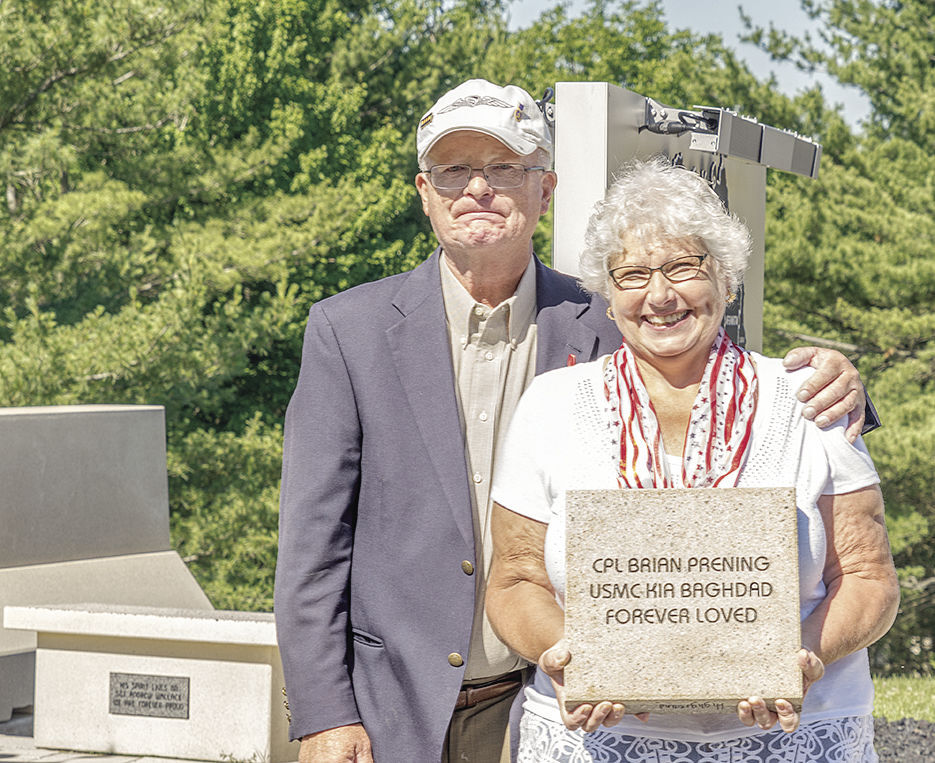 DeForest’s Augie Stark is a volunteer photographer for The Highground, a veterans memorial park near Neillsville. He takes photos of families after stone ceremonies for their loved ones. Stark enlisted in the Navy and served between 1970 and 1974. Selections of his work are shown above.

DeForest’s Augie Stark is a volunteer photographer for The Highground, a veterans memorial park near Neillsville. He takes photos of families after stone ceremonies for their loved ones. Stark enlisted in the Navy and served between 1970 and 1974. Selections of his work are shown above.

Being a good listener is everything to Augie Stark, who usually lets his camera do the talking.

An ex-military man himself, the longtime DeForest resident has taken up a hobby – a labor of love, really – in retirement that pays tribute to veterans.

For the last four years, Stark has worked as a volunteer photographer at The Highground, located in Clark County just west of Neillsville. Spanning 155 acres, the park started as the Wisconsin Vietnam Veterans Memorial Project in 1984, but it’s mission expanded to honor all veterans and their families.

There’s a reason Stark likes it.

“It’s not a memorial with tanks and planes, stuff like that,” said Stark, who runs Augie Stark Photography. “It’s a place of peace and healing.”

The place has grown since Stark first visited 40 years ago. He remembers a highway running through it back then. Now, it goes around the monument.

His work there led Stark to start another project entitled “We Were There.” It started in conjunction with The Highground, but now, Stark hopes to finish it on his own. He wants to interview as many veterans as he can, talking to them about their lives and their war experiences. Stark had already talked to four.

Then, along came the COVID-19 pandemic. It threw a wrench into his plans.

In the Navy and beyond

Stark never saw combat while serving as a communications tech between 1970 and 1974. That made him reluctant initially to get involved with veterans organizations.

“I used to feel I had nothing to say,” said Stark.

Then, a friend said to him, “You showed up.” That friend helped Stark, who enlisted in the Navy while the Vietnam War was raging on, realize that when you sign up for military service, you don’t know what’s going to happen. Stark had put himself in harm’s way in the service of his country, even if he was never involved in the fighting.

Stark grew up in Elkhart Lake, in Sheboygan County. He got out of high school in 1967 and wasn’t sure what to do. Stark’s dad was in the Battle of Saipan in the Pacific campaign of World War II, and both his uncles were also in the war, with one fighting in the Guadalcanal campaign.

Around 1969, Stark began to think hard about joining the service.

So, Stark joined the Navy, although he wasn’t taken in until March, 1970. After being tested, and having a couple of years of college to his credit, Stark was slotted as a communications tech in the technical branch, listening to enemy signals and radio traffic.

Stark remembers helping a destroyer cross Libyan leader Muammar Gaddafi’s “Line of Death” as the U.S. claimed the right to conduct naval operations in international waters to prove it had “freedom of movement,” as Stark explains.

When he left the Navy, Stark again felt lost.

“I was a ship without a rudder,” said Stark. His mother convinced him to move to Milwaukee, but it proved to be a mistake.

“I’m a country mouse, not a city mouse,” said Stark.

Going back to college, Stark attended the University of Wisconsin-Stevens Point to major in resource management from 1976-1977. After graduation, Stark looked to work in horticulture. He got a job at a production nursery in Sturgeon Bay, remaining there for 10 years. Looking for a bigger opportunity in a wholesale nursery, Stark put in his resume with The Bruce Company, and found work there, staying for 25 years before retiring.

“It was a good move for me,” said Stark, who was in charge of the holding area at The Bruce Company.

After leaving, Stark needed something to do to keep active in retirement, so he turned to photography. His dad was a photographer, and Stark became interested in the medium. So, he began to learn the craft in retirement.

At first, Stark began taking photos just for himself. He would assign himself projects.

Last year, Stark wanted to shoot the railroads of Wisconsin, taking pictures of old rights-of-ways and depots. In particular, there was an abandoned depot in the small community of Malone, in Fond du Lac County, that he really “wanted to bring to life.”

Stark’s education in photography has expanded, as he’s learned more in-depth about different techniques. He discovered the work of Trey Ratcliff, a Texan living in New Zealand. Stark said he was shocked with all the color Ratcliff developed in his photos, starting a student-teacher relationship with the photographer in a sort of mentorship.

Stark also studied the works of other photographers, like Tim Wallace. Stark is discerning when it comes to that sort of thing.

“Working on the internet, it’s important to filter out who’s doing stuff you like,” said Stark.

A trip to The Highground, after a 40-year absence, spurred Stark to get involved with the memorial park.

In visiting the gift store, Stark struck up a conversation with a clerk, who expressed gratitude for his service.

“In 40 years, that was the first time anybody had ever said, ‘Thank you,’ to me for it,” said Stark.

Stark also noticed that stone ceremonies were held there. Families could buy a stone for around $400 to $500 that would list the name of their loved one and information about that veteran’s service. Stone ceremonies are held for such occasions, with 20 to 30 people often attending them.

The general manager of The Highground talks to each family individually, according to Stark. For those veterans who are still living, the general manager encourages them to tell their stories to their families and to not “let them die with you,” said Stark.

After the ceremonies, Stark has 10-15 minutes with the families to take their pictures with the stone. He offers to send them retouched jpegs for free and prints at cost.

“Sometimes, these families haven’t gotten together for 15 to 20 years,” said Stark.

With he and his wife experiencing some health issues, and people quarantining due to the coronavirus, Stark hasn’t been able to get to The Highground much this year. He misses taking photos of the families, who often tell him how moved they are that Stark is shooting their pictures.

Stark also gets a kick out of meeting small children, who will ask him if he’s a veteran. After he says he is, they will often ask if they can shake his hand.

“You can see the smile on their faces, that they just got to shakes hands with a vet,” said Stark.

In addition, Stark has also taken photos of monuments at The Highground for the park’s website. At The Highground, visitors can take in 15 tributes, a museum, four miles of hiking trails, a gift shop and Camp Victory, which is located 18 miles north of the main campus and covers 295 acres. Free to the public and open 24 hours, seven days a week, The Highground receives no ongoing federal or state funding. It is supported by private donations and grants. The gift shop and museum are open daily between 10 a.m and 5 p.m.

Stark said it was started by a Vietnam soldier whose best friend died in his arms. When the soldier returned Stateside, he wanted to honor his friend, but decided there weren’t any memorials that were significant enough. So, he bought some land, located at the highest spot in the Neillsville area, according to Stark, who said it has beautiful vistas.

Over the years, people donated to the project, which strictly honors Wisconsin veterans. It has bronze statues and a replica of the Liberty Bell, according to Stark.

A monument called “Tears” is particularly affecting for Stark. It shows a soldier from the Vietnam War in a poncho and helmet with his gun down. There are dishes of water that step down to another statue of a mother and daughter. Stark said it depicts the cycle of war, with a soldier in the field who has lost his buddy on down to a family who has lost their father.

A year ago, Stark and The Highground appeared to be teaming up to do interviews with veterans for the project “We Were There.”

Stark said it has since fallen through, although he wants to start it up on his own.

Stark’s personal byline is: “Every person has a story worth telling … and I’d like to tell yours.”

It all began with a talk Stark had with a friend, who was a combat veteran. Stark asked him if he’d been to any reunions. The friend said he hadn’t, and Stark asked why. So, the friend went to one and came back happy. Stark said his friend told him he didn’t have to explain anything to anyone there about his military experiences. They knew all about what it was like.

That led Stark to want to interview him, not in an “ambush interview” style, but rather something more intimate and personal. As part of the project, Stark would also take candid photos of his subjects.

What he takes pride in, more than anything, is his ability to lend an ear to someone who has a tale to tell.