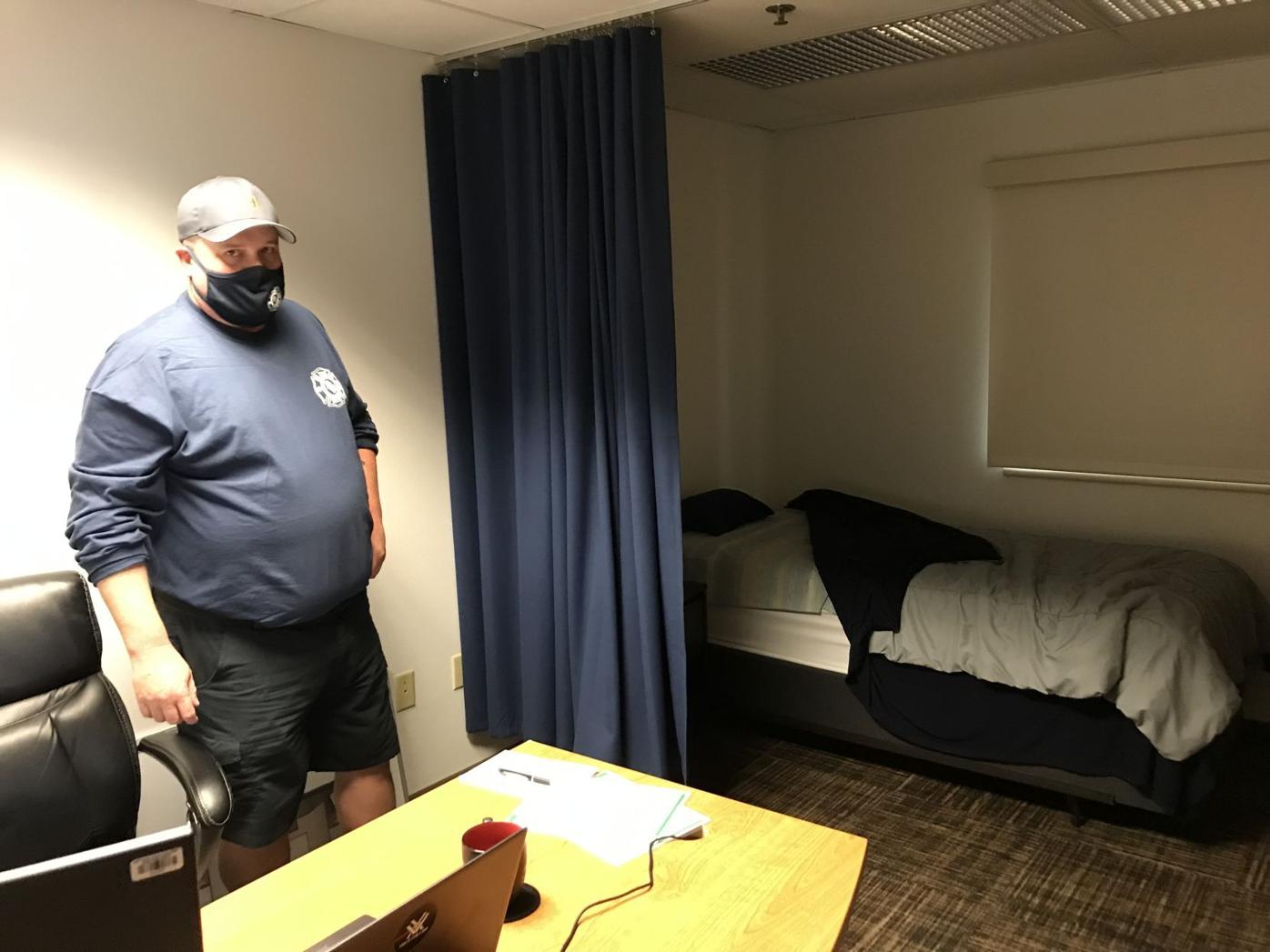 Fire Chief Steve LaFeber shows one of the “sleeping quarters” at the DeForest Windsor Fire and EMS Station, with a curtain to separate it from the rest of the office. 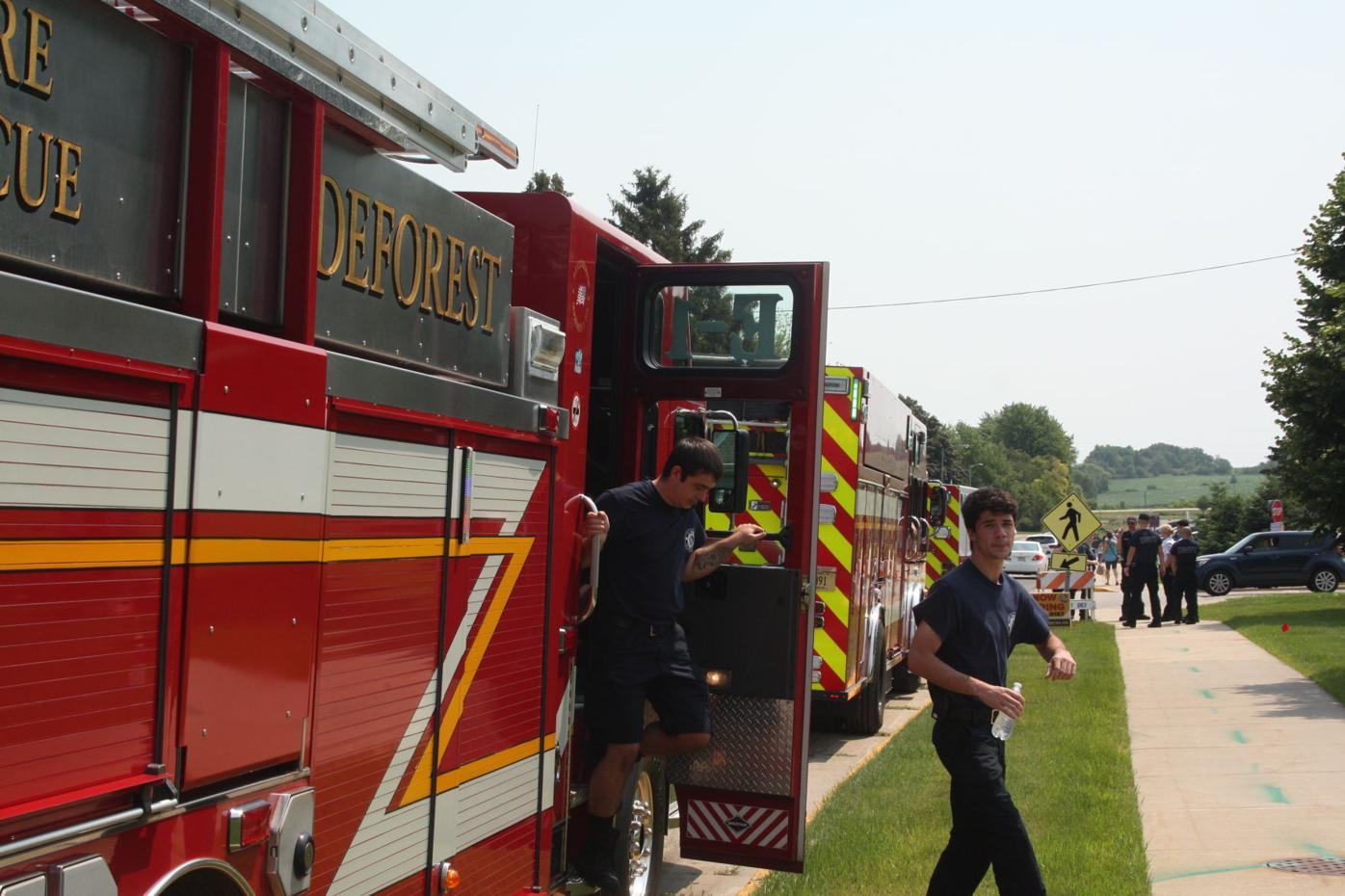 Fire Chief Steve LaFeber shows one of the “sleeping quarters” at the DeForest Windsor Fire and EMS Station, with a curtain to separate it from the rest of the office.

DeForest Windsor Fire and EMS is quickly moving toward tangible results in a long-discussed plan that would include improved living quarters and a second satellite station.

The project goes back about 10 years, according to Windsor Village President Bob Wipperfurth, when the Fire Board worked with a consultant to look at options and projected needs, deciding to stay at the DeForest Fire Station, but also looking toward a second station in the future.

“So it has been bantered around for a number of years,” said Wipperfurth, explaining that discussions have “ramped up” in the past two to three years.

The Village of DeForest is in the process of soliciting potential designs for an expansion, which, according to Fire Chief Steve LaFeber, would be an improvement in terms of comfort for firefighters and EMTs, and also logistical capabilities. The goal is to have 10 sleeping quarters rooms and four bathrooms, giving each on-call member their own room.

Sleeping quarters is currently a loose term at the station with two and three beds to a room--a situation that would be uncomfortably close if it were university freshman dorm housing. Sleeping quarters can also be applied to common rooms and activity areas. When members arrive back at station after a call, there is a single bathroom to share.

The issue also took on new urgency with the arrival of COVID-19.

The Village of DeForest owns the property that is home to the current fire station, and it is leased to the fire district. The fire district, comprised of the villages of DeForest, Windsor, and the towns of Vienna, Leeds, and Hampden, then pays rent on that property.

A similar setup appears likely in the case of a satellite station, according to Wipperfurth, but in this case, it would be the Village of Windsor that would own the property and building at Windsor Crossing.

The Windsor Village Board voted on Aug. 19 to move forward with a plan to acquire land at Windsor Road and North Towne Road, potentially an anchor property for future development in that neighborhood.

“Personnel will be able to get to homes sooner, to businesses sooner, for people who live in the southern half of the district,” said Wipperfurth, citing Lake Windsor, Terrace Park, and a number of large subdivisions. “I think underlying that is the most important thing, that this is a significant value for those residents.”

“We are growing every day,” said LaFeber, “and our department maybe has not kept up with that growth, as far as facilities and staffing, and this is another attempt to meet demands.”

Difficulty meeting and staying at full staffing is not a problem unique to the DeForest-Windsor area, but is a nationwide issue with deep-rooted long-term causes like increased mobility of potential volunteers moving between cities, and less commonly reliable working hours (and subsequent difficulty meeting obligations of on-call schedules and response time).

Despite the broader societal challenges involved, the ability to provide quality facilities and personal space are among the factors that attract new recruits and prevent them from moving on to other departments in the future.

The plan for a new station is part of long-term planning, and “is not going to be happening tomorrow,” according to LaFeber. The immediate goal there is to acquire the land while it is available and affordable, and then to grow into that second station.

“The goal is to get it in such a way that we have to work under the levy limits, but we don’t want to have all that tax burden to happen overnight.”

Outside the station, LaFeber can show how much potential space is available with the sacrifice of a courtyard area. The now fenced-in area would be broken up, and the back wall of the station would presumably be extended toward the sidewalk as close as village setback rules will allow.

Even with the expansion and second station, there is not a plan for any new large pieces of equipment according to LaFeber. The need is for more hands to be available. The evolving nature of the work also makes large equipment, like the tower engine, less a part of the day-to-day job.

Although they are trained for large scale structure fires, as of recently, the department has been responding roughly 85 to 90% as EMS, according to LaFeber, estimating that the by the end of the year it will be around 70-30 EMS versus fire calls.

“And there are a lot of combination calls: car accidents, CO (carbon monoxide) calls, those are both sides,” said LaFeber, “but working structure fires are becoming fewer and farther between--which is a good thing.”

In either case, time is of the essence and having a second station at Windsor Crossing would drop estimated initial response time in some parts of the district, by about half.

“The improvements are there,” said LaFeber, “and if you’re having a heart attack, six minutes is forever.”

The plans for the second station and the station remodel are both planned on the District Fire Board Agenda for their Sept. 14 meeting.