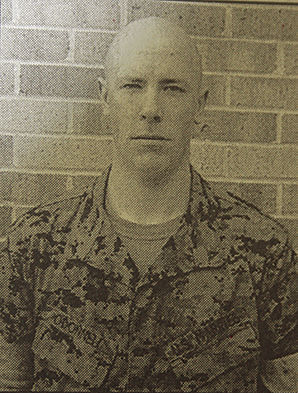 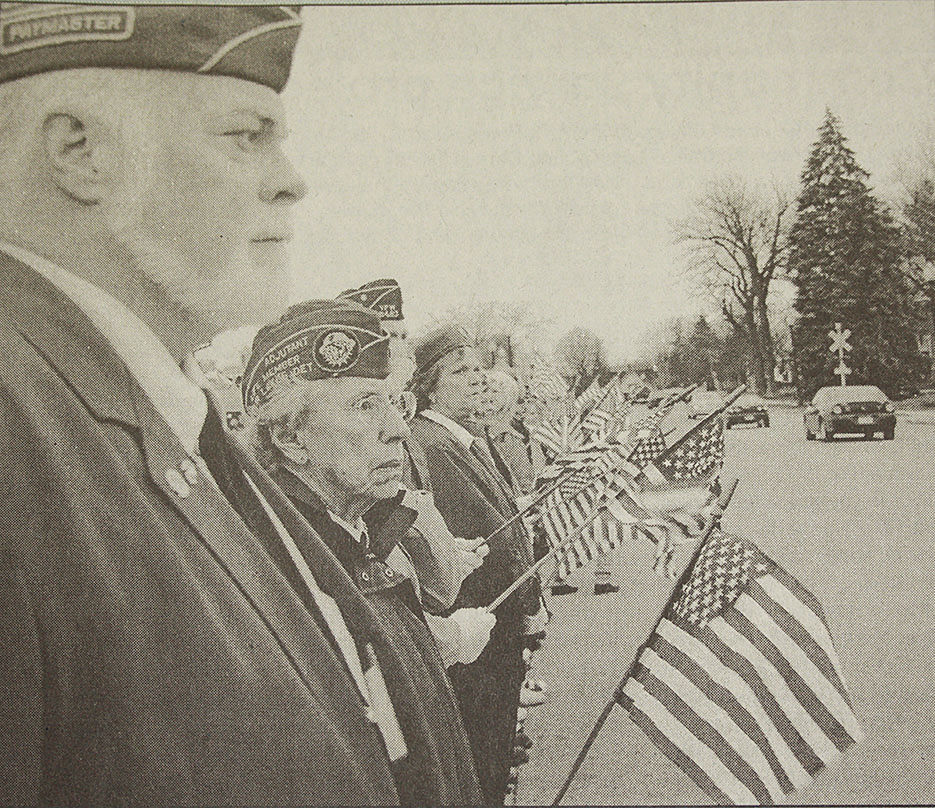 A file photo of the Pass in Review ceremony held Nov. 20, 2004, to honor Shane O’Donnell, who died in the Iraq War. O’Donnell was the first DeForest area casualty since World War II. The DeForest American Legion post voted last November to change its name to Olson-Grinde-O’Donnell American Legion Post #348.

A file photo of the Pass in Review ceremony held Nov. 20, 2004, to honor Shane O’Donnell, who died in the Iraq War. O’Donnell was the first DeForest area casualty since World War II. The DeForest American Legion post voted last November to change its name to Olson-Grinde-O’Donnell American Legion Post #348.

American Legion Post #348 in DeForest is getting a new name added to its title.

The organization is now known as the Olson-Grinde-O’Donnell Post #348, with Shane O’Donnell’s last name joining those of Edward Olson and John Henry Grindle.

The decision was made with all due care.

“To me, it’s almost a religious thing,” said Post Commander Dick Snortum. “It’s that honorable. To change the name of a post is beyond the norm. It’s a very special event. It does great honor to Shane’s memory. It’s definitely a historic event.”

O’Donnell was killed in action on Nov. 8, 2004, in Babil Province, south of Baghdad in Iraq. He was 24 years old and is buried in the Norway Grove Cemetery in DeForest. He was born to Larry and Peggy O’Donnell on Oct. 24, 1980, and played baseball and football at DeForest Area High School, while also singing in the choir. He graduated from DAHS in 1999.

The truck he used to drive had a bumper sticker that read, “You only have the rights you are willing to fight for.”

On Oct. 30, 2002, O’Donnell joined the Marine Corps, becoming a member of G Company, 2nd Battalion, 24th Marine Regiment, 4th Marine Division. His unit was activated June 1, 2004, and after receiving extra training at Camp Pendleton in California, O’Donnell was sent to Iraq in September of that year for what was supposed to be a six-month stint.

An explosion during combat operations in November ended his life. O’Donnell had become the first DeForest area war casualty since World War II. There were no DeForest area casualties during the Korean or Vietnam wars.

When Snortum took office in July 2019, he introduced a resolution to change the post name to include O’Donnell’s. A post cannot be named for anyone who is still alive, said Snortum. He knew the proposal would ruffle some feathers.

“Some see it traditionally and would have liked to see it stay Olson-Grinde,” said Snortum.

The matter was discussed within the post in August and then in October and November. A committee was formed. All the pros and cons of a possible name change were identified and laid out before the membership in September, according to Snortum.

“We wanted to leave no rock unturned,” said Snortum.

Snortum believes the process was healthy for the post, as both sides of the argument were heard. The vote was taken in November, and the resolution passed. Every attempt was made to have all members vote on the matter.

“People were allowed to think it through on their own and come to their own decision,” said Snortum.

The post is still in the process of getting the new name on its corporate letterhead, according to Snortum.

An official celebration was going to take place this spring or summer, according to Snortum. But, COVID-19 caused those plans to be put on hold.

Snortum said there definitely will be a community celebration at some point. Any post name change is a solemn occasion, according to Snortum. A careful thought process went into making it.

At the vote, the decision was by majority rule. Snortum said members were allowed to voice their opposition.

The local DeForest post was first chartered in August 1921, bearing the name of Edward Olson.

Olson was the first casualty from the DeForest area in World War I.

Olson was born to Ms. Julia Olson on Jan. 2, 1898 in the Town of Vienna and was raised on a rural farm. He enlisted in the U.S. Army, reported to Camp Funston, Kansas, for training and received orders to deploy for overseas service on May 18, 1918.

Olson traveled through Hoboken, New Jersey, and landed at Le Havre, France, having been assigned to the 89th Division, 353 Infantry, Company D. On Aug. 5, 1918, Olson moved to the front lines, entering combat.

John Henry Grinde was born Feb. 23, 1911, to Mr. and Mrs. Peter Grinde, of DeForest. He was raised on a farm just north of town with two brothers and two sisters.

Grinde, the first DeForest area casualty of World War II, was buried in the U.S. Military Cemetery in Bari, Italy, but was later re-buried at the Norway Grove Cemetery in DeForest at the request of the family on Dec. 8, 1949.

Recently christened as the Olson-Grinde-O’Donnell American Legion Post #348, the post is reported to have 97 paid members and a core of very active members that participate in patriotic and community activities throughout the year.

The post conducts ceremonies to honor the Four Chaplains who perished on Feb. 3, 1943, transferring departed members to the Post Everlasting in May, and conducting the disposal of unserviceable U.S. flags. It also participates in community celebrations honoring veterans on Memorial Day and Veterans Day and places gravesite flags on veterans’ graves in six area cemeteries.