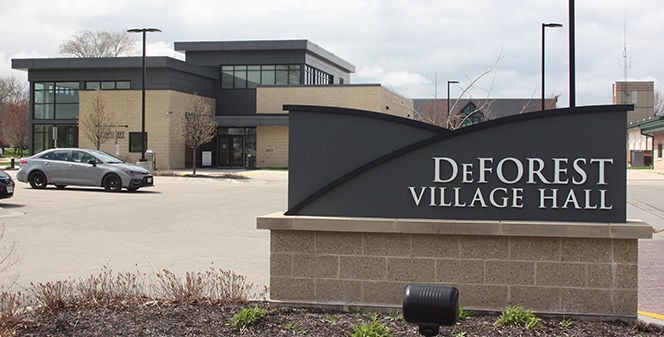 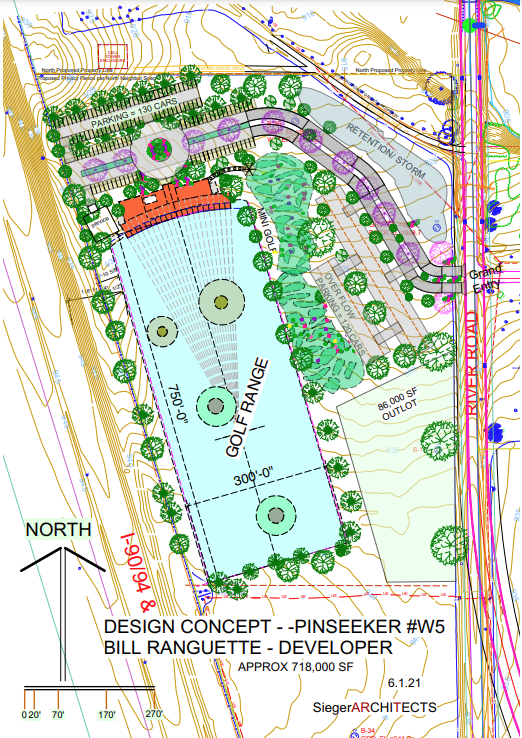 Proposed design of the $10 million Pinseeker golf complex, featuring three stories of sheltered golf, outdoor mini golf, a restaurant, bar and rooftop patio to be equipped as a music venue.

Proposed design of the $10 million Pinseeker golf complex, featuring three stories of sheltered golf, outdoor mini golf, a restaurant, bar and rooftop patio to be equipped as a music venue.

In a special meeting, the DeForest Village Board voted four-to-three in favor of allowing application of a TID financing district to the area that will include the now-approved Pinseekers project. Village President Jane Cahill Wolfgram and Trustees Taysheedra Allen, Jim Simpson, and Colleen Little voted to approve, while Trustees Abigail Lowery, Rebecca Witherspoon, and William Landgraf voted against.

Each of the trustees delivered passionate explanations of their intentions before the vote, including Little and Simpson telling attendees that they had come to terms with possible losing the next election as a result.

In her final comments on the subject and the oftentimes traumatic way that this political process has unfolded in the past few weeks, Allen echoed a point made by development consultant Mark Roffers:  "This is not the end."

Roffers told those at the meeting that even in the case of approval, trucks would not be rolling in for groundbreaking the next day, but the project would need to go back before the Planning and Zoning Commission for detailed plan approval.

The DeForest Village Board sat for six hours at their July 6 meeting, with much of that time taken by 17 public appearances regarding the combination of a new TIF district and the proposed Pinseekers golf complex, and still without time to fully address the issue at hand.

Before beginning public statements, Village President Jane Cahill Wolfgram pointed out to visitors that board members all had information about the project, a petition of support with at least 40 signatures, though they would not itemize them in the meeting, and information from an ambient light study.

First to approach the board was Joe Ring, of Madison, who with his brothers Mike and Jim, runs Park Towne Development Corporation, the developers of Conservancy Place. Ring pointed out that since 1999 Conservancy Place has been approved for mixed-use commercial and residential development, with Pinseekers fitting in the approved village comprehensive plan.

“Besides the owners, we have the most at risk in Conservancy Place with this project,” said Ring, of their 50 acres of property adjacent to the proposed development that has not yet been sold, as well as single-family homes that will be among the closest to the Pinseekers complex. “If this project were to reduce property values in Conservancy Place, that would affect us hugely.”

Trustee William Landgraf pointed out that he was on the board in 2003, explaining that the vision for development was a business park, which would not include activity at night and “160-foot poles and netting into the setting sun in the west.”

When Cahill Wolfgram interjected, pressing for a specific question, Landgraf asked: “Will Park Towne guarantee the success of Pinseekers financially?”

“You know that I cannot guarantee the success of any business,” Ring answered.

“Okay,” said Landgraf, “because it helps the neighbors hearing that because they’ve put their hard-earned effort into their houses. Thanks for answering the question.”

Given the state support for TIF-based development and their use in other cities and villages, he compared the idea of trying to attract new businesses without TIFs to being in a card game without the same options as the other players. When looking at the growth of DeForest in the past 10 years, Jerry Tierney said, a significant number of those project would not have happened without using TIF districts.

When asked by Trustee Rebecca Witherspoon if there are inappropriate applications of TIF districts, Jerry Tierney said there would, but could not give a broad answer, saying that it is a case-by-case situation.

Jeff Block, of DeForest, spoke to the character of Pinseekers project leader Ryan Ranguette, knowing him professionally through the golf industry for about 15 years.

Danielle Ogno, who previously spoke to the Planning and Zoning Commission, told the board that she was generally “in the middle of the road” with the issue and assumed it was a “done deal,” but reiterated her concerns of work needing to be done to improve River Road and add sidewalks, as well as for Pinseekers operators to keep affordability in mind if they realistically wished to offer a destination for local youth.

“As a trustee,” said Taysheedra Allen, “I would say that nothing is a done deal until there is a vote.”

Calling in to the meeting was Mike Lawton, of Madison, who spoke to the TIF issue in general, saying that he had worked in TIF development before in DeForest, including the Fleet Farm project, and that “if your staff says the numbers work, you shouldn’t have any hesitancy in using TIF.” Lawton described taking a “dogmatic view” of opposing TIF districts as “short-sighted,” and potentially harming the community at large.

The level of intensity of the argument came to full display with comments from Abe Degnan, Conservancy Place resident and president of Degnan Design Build Remodel. In addition to again voicing his opposition to use of TIF district development in general, and opposition to placement of the Pinseekers project on River Road.

The original idea for development in the area, according to Degnan who was on the DeForest Village Board at the time, was diverse residential development surrounding a business park with a core of innovation and technology, and hence the naming of the road Innovation Drive.

What followed was 15 minutes of testimony that quickly personal and professional accusations elaborated that is described by the Times-Tribune in greater detail in a separate report.

The list continued and more residents approached the board to ask questions about why the project was planned for this location, what would be done of the noise, would the light and noise pollution from Pinseekers disturb neighbors and the environment, what of Ryan Ranguette’s OWI in 2014, what of his father’s association with the project?

Brian Goodman, who previously spoke at the Planning and Zoning Commission, told the board that Conservancy Park was meant to be based in natural conservation, going on to cite Top Golf lawsuits and the statewide issue of alcohol dependency as highlighted in a USA Today report.

The speech ended with a round of applause from the audience.

In His Own Defense

In time, Ranguette approached the board to answer those questions one after another, including the more personal issues. The property that is the subject of the current proposal was not the first choice in the DeForest area, he said, but the first choice was scooped up by another developer.

Over the course of the project’s development, he said that an unexpected outcome has been a recent expertise in acoustics as he has investigated concerns of noise from players teeing off. The noise, he explained would be negligible as the closest homes would be roughly a quarter of a mile from where clubs would be hitting balls.

In terms of lights and hours, he explained that Pinseekers’ lights would be much less intense, and much more locally focused than those of the nearer baseball fields. In a separate presentation, Community Development Coordinator Michelle Lawrie, showed photos taken of the prospective site from the nearest residential locations to give a sense of the actual distance.

By the time these questions were being answered about half the meeting’s attendees had already left.

A question brought by the board to several questioners, was what would be appropriate for development on that land, which the owner clearly has interest in selling? In an earlier meeting, a participant suggested a skating rink, although in this meeting another local resident said a skating rink would be equally unacceptable.

Degnan pointed to the original vision of being an ag-business technological center in the vein of nearby ABS, developed with an office park. That proposal feel through though.

In the post-COVID world, office space development also appears to have lost momentum, as the Federal Reserve Bank of Atlanta reported in May:

“We explored office market fundamentals since the onset of the COVID-19 pandemic and found that office-using employment declined while vacancy rates for office space increased significantly.”

“Considering only remote work that can be done without a loss of productivity, we find that about 20 to 25 percent of the workforces in advanced economies could work from home between three and five days a week...A survey of 278 executives by McKinsey in August 2020 found that on average, they planned to reduce office space by 30 percent.”

The issue remained unresolved as exhausted village board members, having already passed ordinance exceptions to extend the meeting to 11:30 p.m. and then 11:45 p.m., scheduled a special session on July 14 to complete the meeting and discuss the use of a TIF district for developing the area where Pinseekers would be built.