A Dane County commission has narrowed to three the number of maps being considered, as the county redraws its 37 supervisory districts based on the 2020 Census.

The executive committee of the Dane County Board was set to review the three maps at a virtual meeting on Wednesday, Oct. 6, and to recommend one.

The county board will then hold a public hearing on the committee’s recommendation on Thursday, Oct. 14, and is expected to vote that night to adopt one of the maps. The Oct. 14 county board meeting will be virtual, at 7 p.m. The agenda, with a meeting access link, is at dane.legistar.com.

Brian Standing, a senior planner with Dane County Planning and Development, told the county board at a special meeting an Oct. 4, attended by members of its Redistricting Commission, that there’s then a last procedural step, reconciling existing voting ward boundaries with the new map boundaries, to ensure they match up. Past experience has shown any changes this point “tend to very minor,” Standing said.

Once ward lines are reconciled, the board will come back on Nov. 18 for a final vote. Standing said the goal is to finalize a map before Dec. 1, when nomination papers can be taken out for spring 2022 county board and local elections.

Standing said the county board, by its own ordinance, isn’t allowed to tweak any of the three choices. If it doesn’t like any of the maps, it must reject them all and ask the Redistricting Commission to start over, he said.

Since October 2020, the 11-member commission has met 19 times. It “did a lot of public outreach, and spent a lot of time trying to reach out to the communities we partner with,” to choose the best map out of dozens submitted, Standing said.

Its process included working with an outside group to set up a portal that allowed anyone to submit a proposed new map.

“Given the fact that we had never done this kind of public submittal before, it worked very smoothly,” Standing said. “ We were very happy, I think overall, with the level of participation. It was a joint effort from a large group of people.”

Standing noted that the Redistricting Commission in its Sept. 30 recommendation to advance the three maps was bound by federal and state law and county ordinance. Among the guidance it had to abide by:

• The county’s population had to be evenly divided across all of the districts, with a target of about 15,00 people in each district.

• The commission was not allowed to compare the submitted maps with existing supervisory district map or to consider how shifting district lines might affect incumbents. “We took that quite seriously,” Standing said.

• Under the federal Voting Rights Act, a minimum number of districts had to have a significant minority population.

• To the best extent possible, “communities of interest” were not to be split by district lines. Neither were existing voting wards and smaller municipalities to be split into different supervisory districts, if possible. But given all the criteria required to be met, that wasn’t always doable, Standing said. “Sometimes that’s inevitable; you cannot guarantee that you are not going to split a ward,” he said.

• No county board members were on the commission, in an effort to keep it non-partisan.

County Board Supervisor Matt Veldran, of Madison, expressed dismay that despite the above guidelines his neighborhood was nevertheless “split into two districts on all three maps. That doesn’t make a whole lot of sense.”

“The communities of interest are not kept together,” Veldran said.

Supervisor Sarah Smith, of District 24 that includes Monona, questioned why “every one of the three maps cuts off either an entire ward or splits a ward,” there.

“Monona doesn’t have an option to remain whole?” Smith said.

Standing responded that Monona’s close proximity to Madison and Cottage Grove made it “very difficult” to meet the 15,000 residents-per-district target without splitting wards and dividing municipalities into more than one district.

“It’s not possible that every community and every ward would remain in one district,” Standing said.

The geographical expanse and configuration of rural districts varies in each of the three maps, and some proposed rural splits left supervisors there scratching their heads.

Supervisor Andrew Schauer, who represents the District 21 northeast of Madison, voiced concern about what was behind the proposed redrawing of lines affecting the towns of Burke and Westport.

The boundaries proposed, Schauer said, appear to be “the kind of salamander that gerrymandering was sort of named after, and that is very problematic to me.”

District 34 Supervisor Patrick Miles said he’s concerned that the one of the proposed maps splits the town of Dunn, south of Madison, into two county board districts.

“Maps C or G would be a better option than Map A. That one would definitely not be acceptable to the town of Dunn,” Miles said.

“The town of Dunn is a very tight community that has been united in preserving farmland and has been a leader in the county’s conservation efforts. As a community of interest, it should be kept intact,” Miles added.

Miles said McFarland officials appreciate that on all three maps the village falls into a single county board district and said “they would lean toward Map C or G, in solidarity with the town of Dunn, in keeping them intact.”

Supervisor Jeff Weigand, of District 20 that includes Marshall and surrounding rural northeastern Dane County, asked whether the commission analyzed the potential increase and decrease in the total geographic area of existing districts, based on how their boundaries are proposed to be redrawn.

The commission deliberately didn’t do that as to not taint the process, Standing responded. 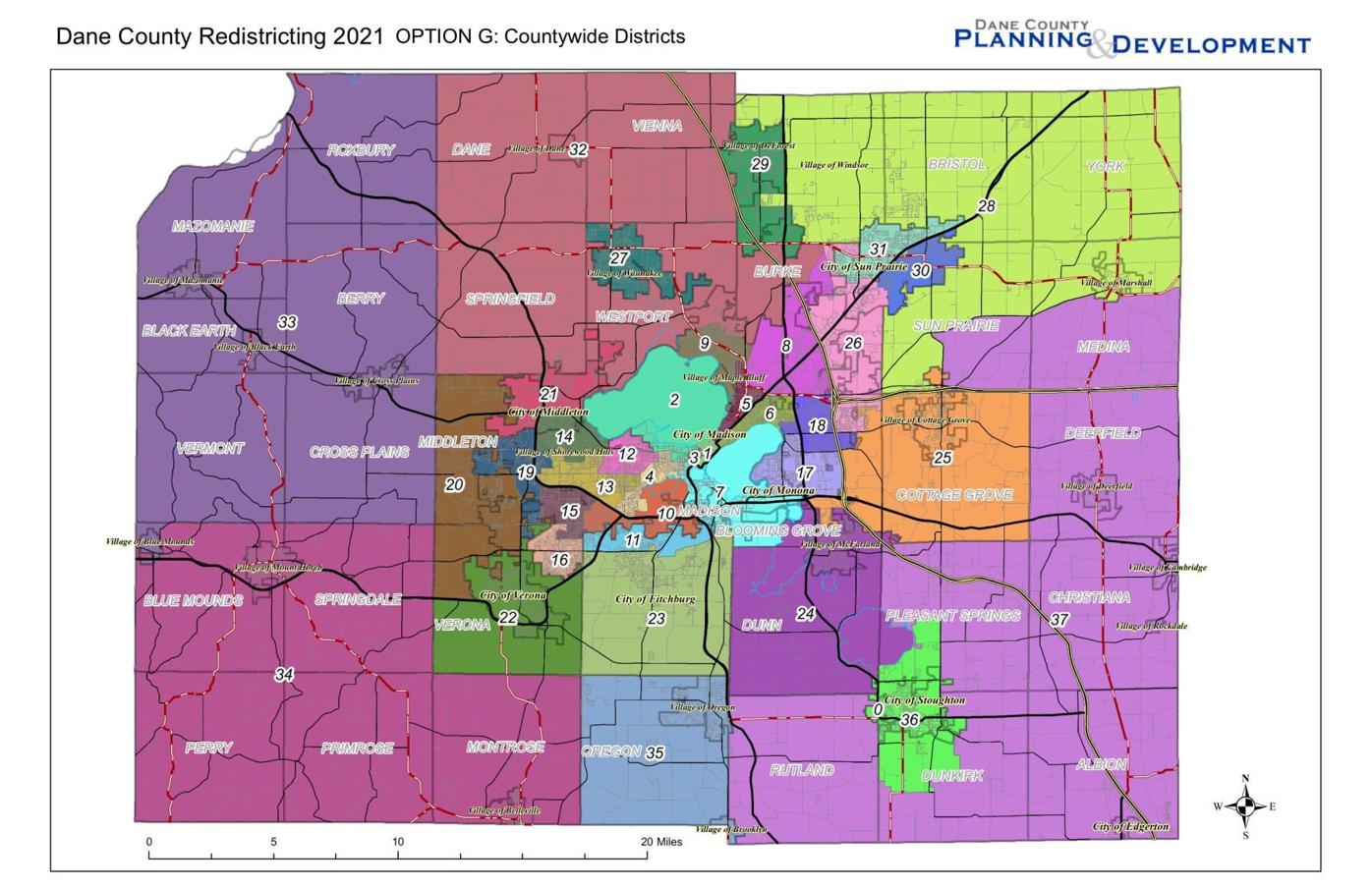 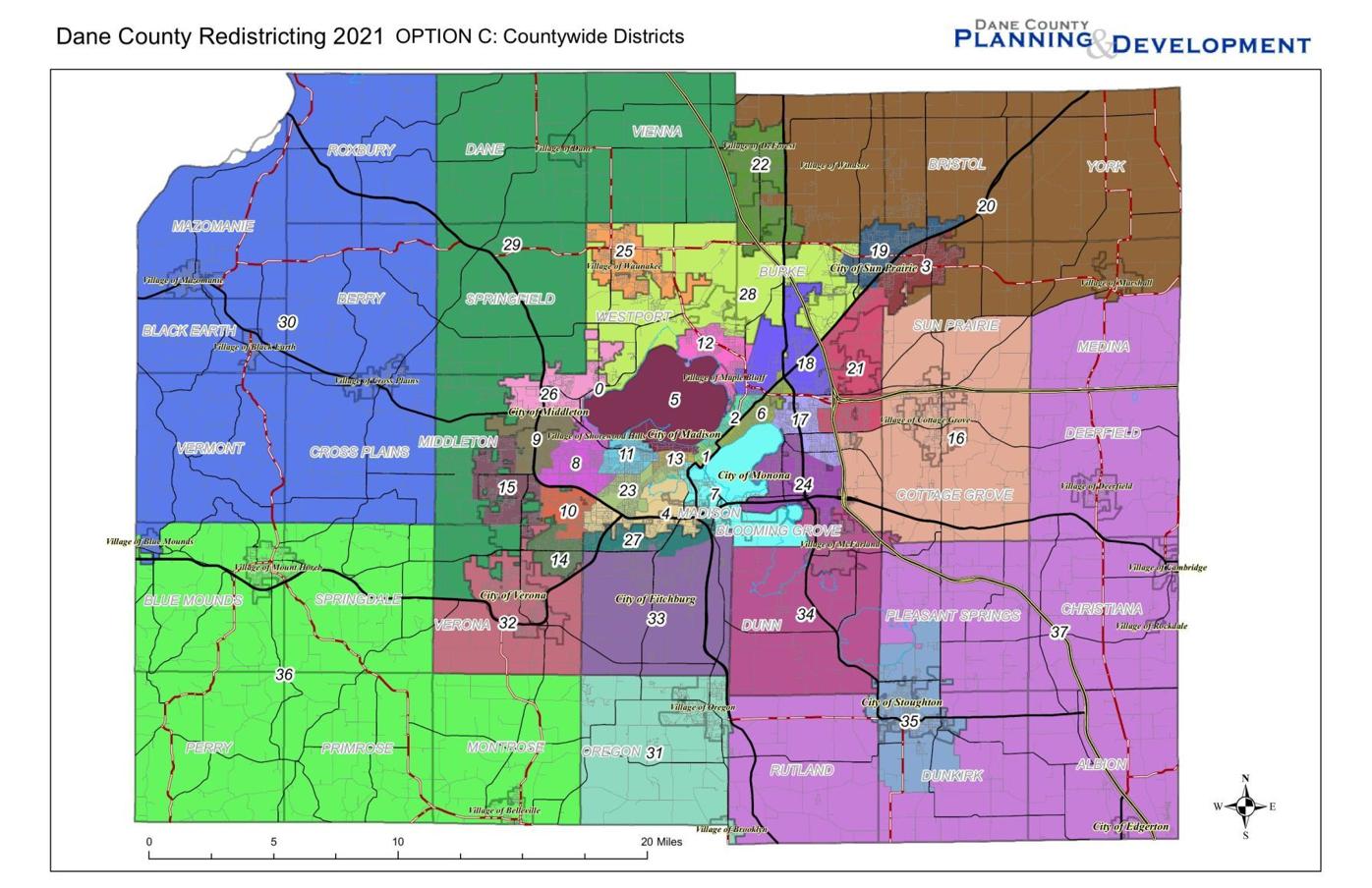 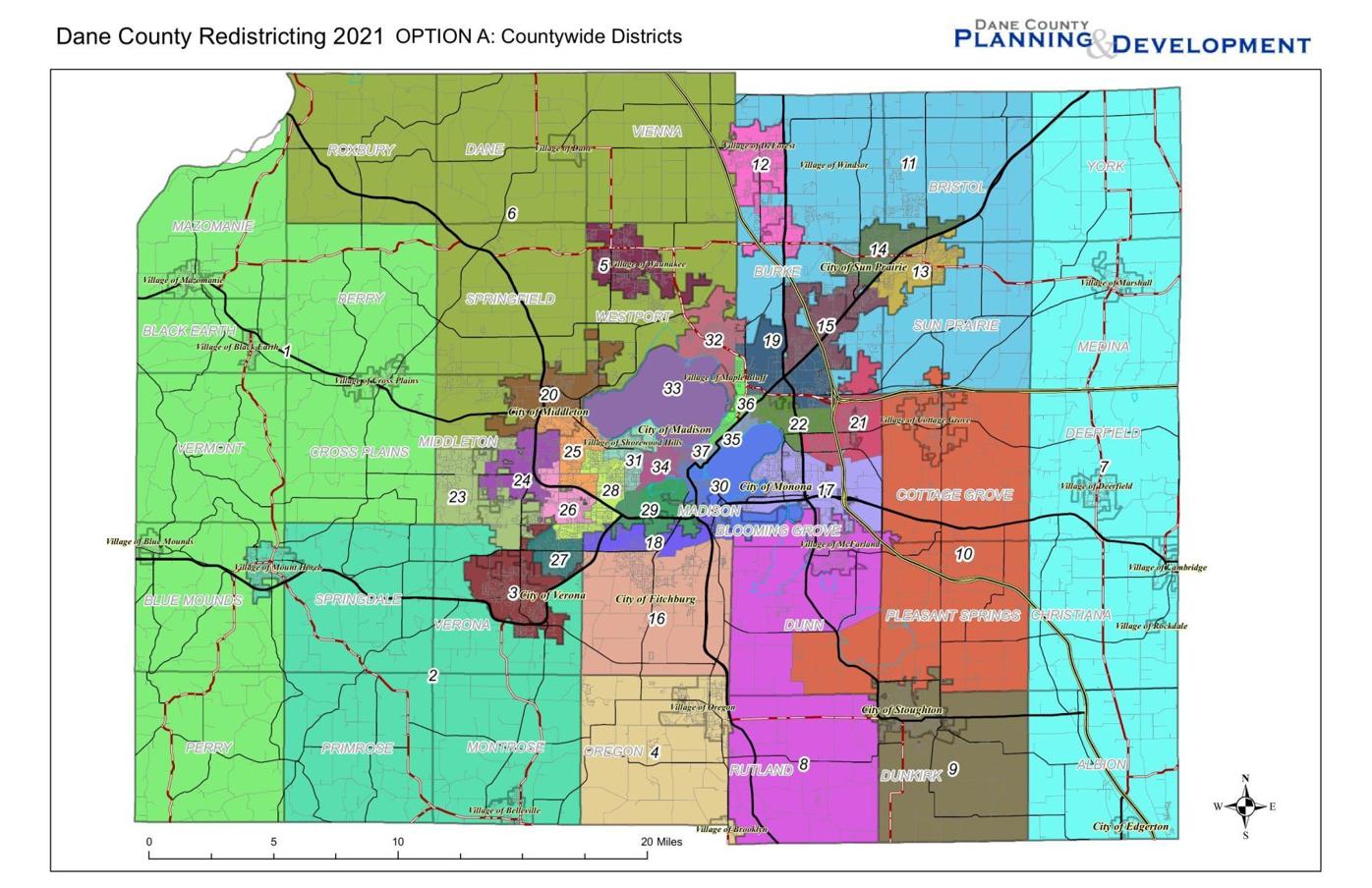