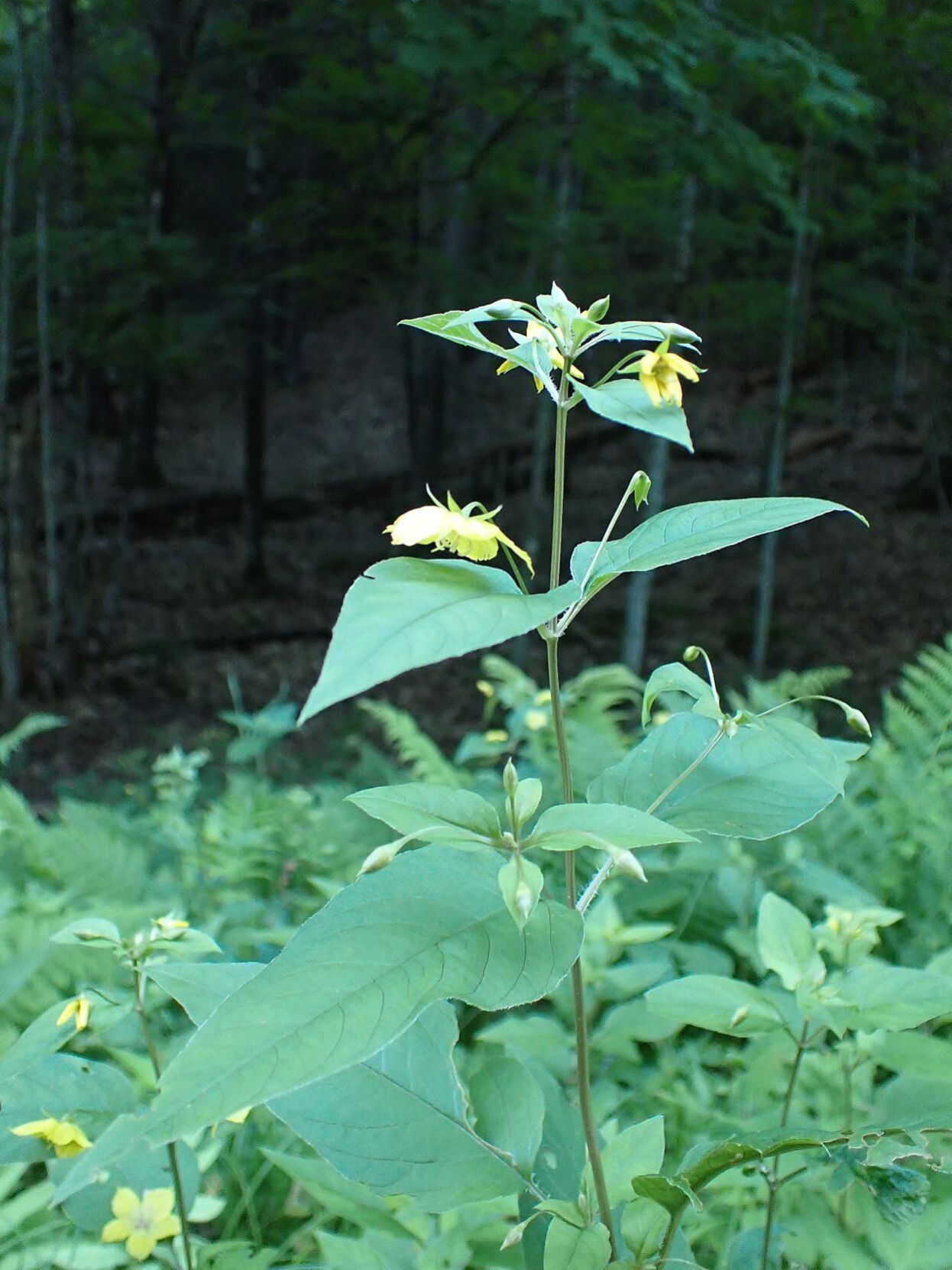 Fringed loosestrife is a native plant with yellow flowers. It often grows in damp soil. 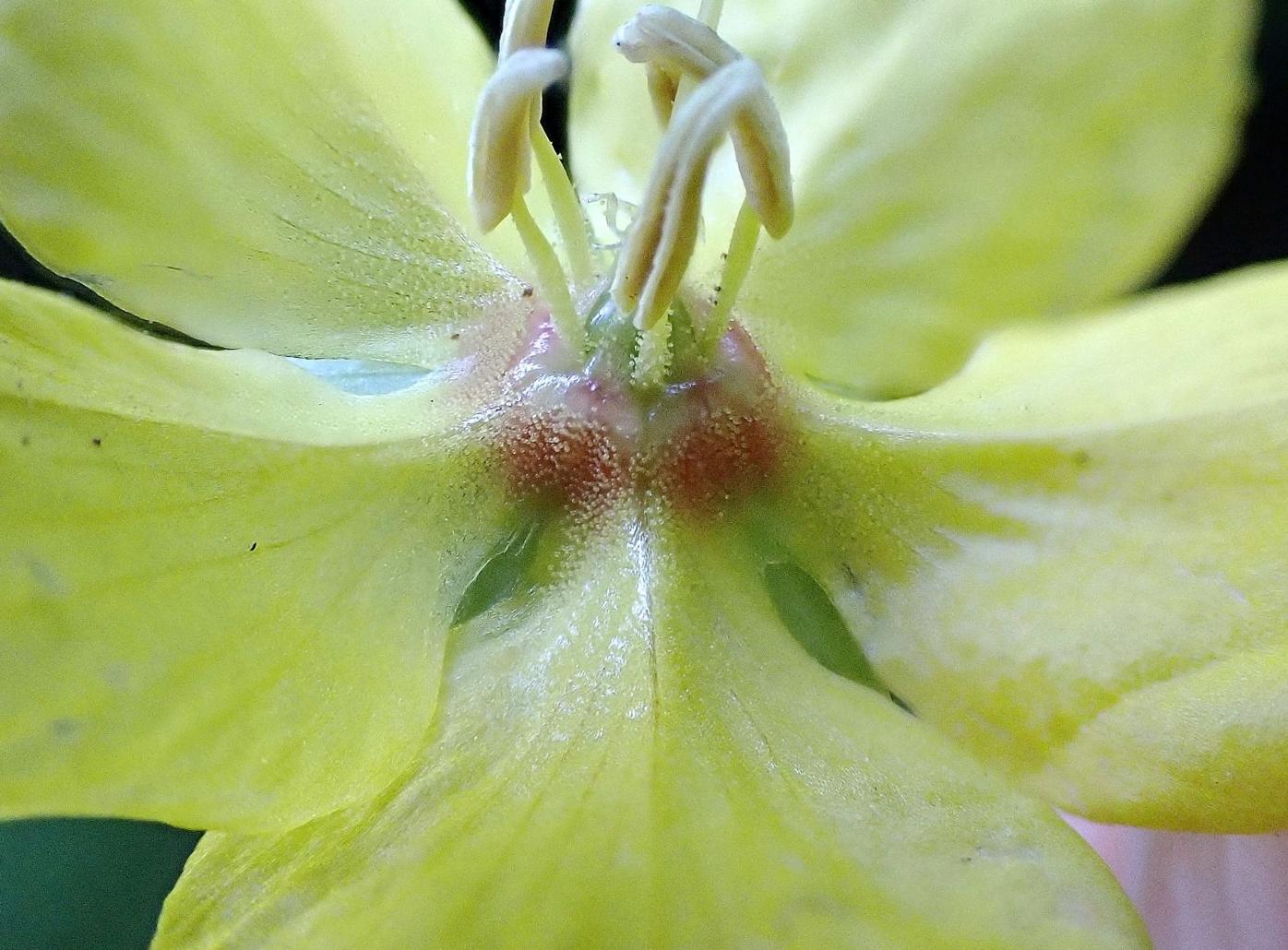 Flowers in the genus Lysimachia, like this fringed loosestrife, have gland-tipped hairs that exude oil instead of nectar as a resource for specialized bees.

Fringed loosestrife is a native plant with yellow flowers. It often grows in damp soil.

Flowers in the genus Lysimachia, like this fringed loosestrife, have gland-tipped hairs that exude oil instead of nectar as a resource for specialized bees.

As I wheeled my bike past the front gardens at the Museum, the heady perfume of common milkweed flowers swirled in the deepening shade of late afternoon. A monarch butterfly landed, sipped nectar from the pale pink flowers, and then rose easily with flaps of its enormous, orange wings. Little black ants crawled industriously over the blossoms, too. Tonight, after I’d sunk into bed, these pale, sweet smelling flowers would likely send out their beckoning signals to the night shift—moths looking for a sip of sugar-filled nectar on their way to find a mate.

Ten miles later, as I entered the dim tree tunnel of my town road, I smiled at a patch of yellow stars twinkling from the gravely shoulder. The five-petaled flowers belong to fringed loosestrife, a native plant that seems to be on the increase along roads where I ride my bike.

If you live on a lake or pay attention to invasive plants, the name loosestrife might send a shudder down your spine. Purple loosestrife is an introduced species that is listed as “Restricted” in Wisconsin, which means that “it has the potential to cause significant environmental or economic harm” when it fills in wetlands, replaces native plants, and disrupts habitat for fish and wildlife.

Luckily, these two plants are unrelated by both taxonomy and ecology. They are in two completely different plant families, and fringed loosestrife does not become invasive. The shared name doesn’t seem to have any botanical significance, since it’s a literal translation of Lysimachus, the name of a friend of Alexander the Great.

There were no butterflies flitting in their unsteady way among these flowers, though, and neither would fur-covered moths drink from sweet chalices by night. A closer look at the blossoms—through the macro setting on my camera—revealed hundreds of tiny, jewel-tipped hairs crowding onto the pale yellow stalks of the anthers, cascading down onto the red centers of the petals, and scattering outward like glass beads spilled on a silk cloth.

The sparkling droplets weren’t diamonds, of course, but to one local species of bee, they were even more valuable—as their only options for baby food and Tyvek.

Female bees in the genus Macropis collect oil from flowers in the genus Lysimachia, lured in by a special scent that no other pollinators can detect. The bees spread that oil on the walls of their nests, where it keeps the tiny soil tunnels dry in the summer and humid in the winter. They also mix the oil with pollen to make bee bread as food for their babies. Many of our solitary, native bees who nest in the ground need to line their tunnels with waterproofing, but they secrete wax and oil from their own bodies to do the job. And they mix nectar with the pollen to make bee bread.

Just one species of oil bee lives in Wisconsin (Macropis nuda). Their days begin mid-morning, as the males wake up in the cozy embrace of a buttercup or other nearby flower. Females sleep in their shallow ground nest, and seem to rouse a little deeper into the warmth of day. Both males and females perch on leaves to bask in the sun and venture out to non-loosestrife flowers to drink nectar for their own energy. By noon, females begin to visit loosestrife flowers that are receiving full sun, and males—with black bodies and yellow foreheads—patrol nearby in search of mates.

When a male wants to mate, he skips all formalities and simply pounces on a female. If she is receptive, they tumble together for a second or two, and then fly off separately. If she objects, the female bee kicks out her hind legs and dislodges him. She may then continue to forage with her hind legs held high as a reminder of her rejection. This gesture is even more effective because the female bee’s hind legs are lushly furred with white hairs that contrast with her black body.

The fur serves another purpose, too. Short, finely dissected hairs hold oils like a sponge and stiffer hairs support the sodden mat. Using hairy pads on their front legs, females scrape oil from the flower onto her hind legs. She can also collects oil and pollen simultaneously, and carry them mixed together in a ball.

The mother bee places this bee bread inside a small nest cell that she dug into soil and lined with oil. She lays a single egg and closes the cell. The larva hatches, feeds for 10-14 days, and spins a cocoon that completely fills the cell. The cocoon is so waxy and waterproof that the larva must leave a small hole for gas exchange as they breathe through the winter. An adult bee emerges the following spring.

This story has been playing on repeat for roughly 100 million years. The oldest known fossil of a bee is in the same family as our Macropis nuda. That means they flew with dinosaurs, just as flowering plants evolved. A long history doesn’t guarantee a stable future, though. Just like the more visible monarch butterflies, these rare bees are vulnerable to the whims of habitat destruction by humans and climate.

Because I tend to bike past before and after the sun shines on the flowers, I still haven’t seen a little black bee with lushly furred legs visiting my patch of loosestrife. But I like knowing—or at least hoping—that they’re out there...my neighbors in the natural world.

For more than 50 years, the Cable Natural History Museum has served to connect you to the Northwoods.