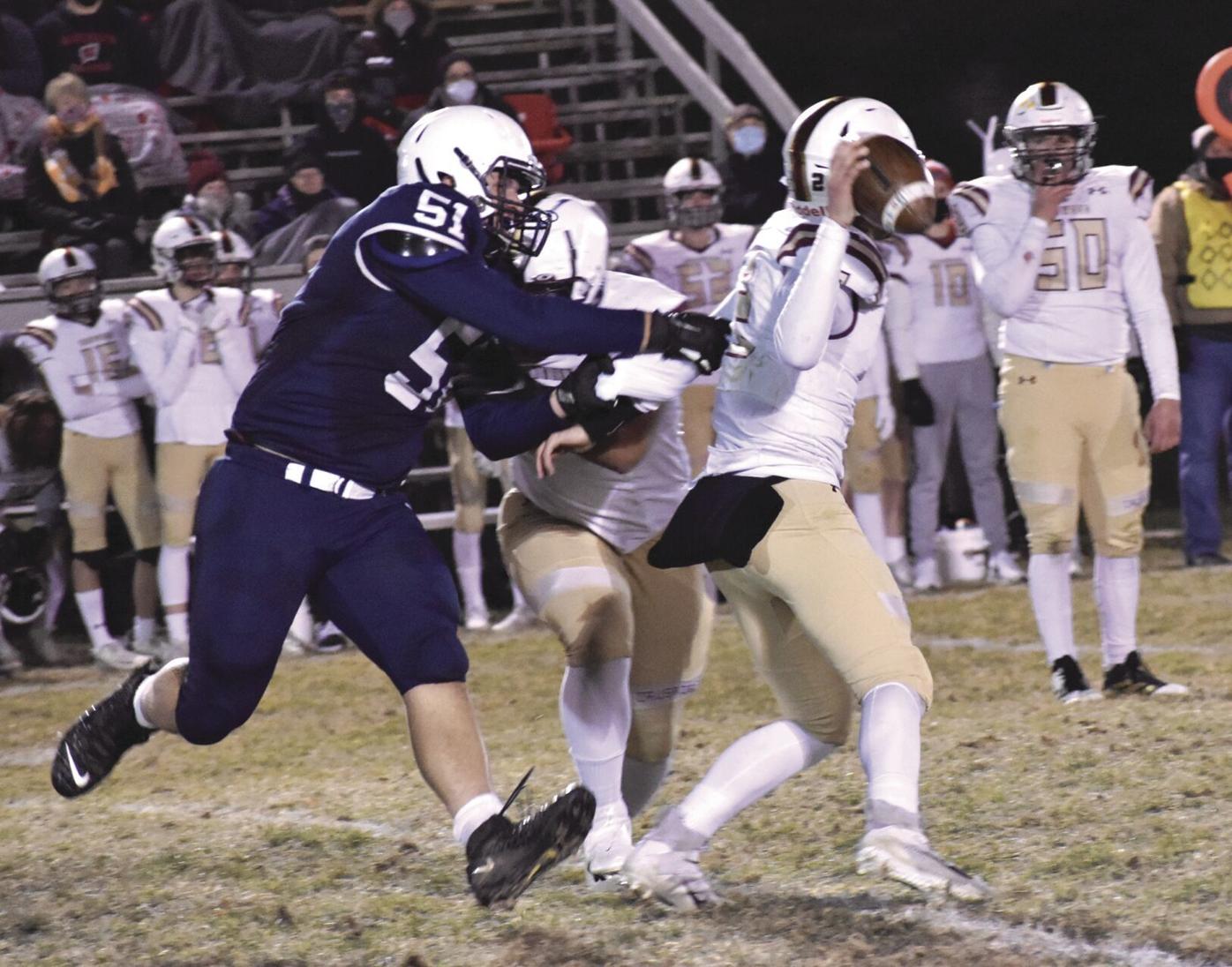 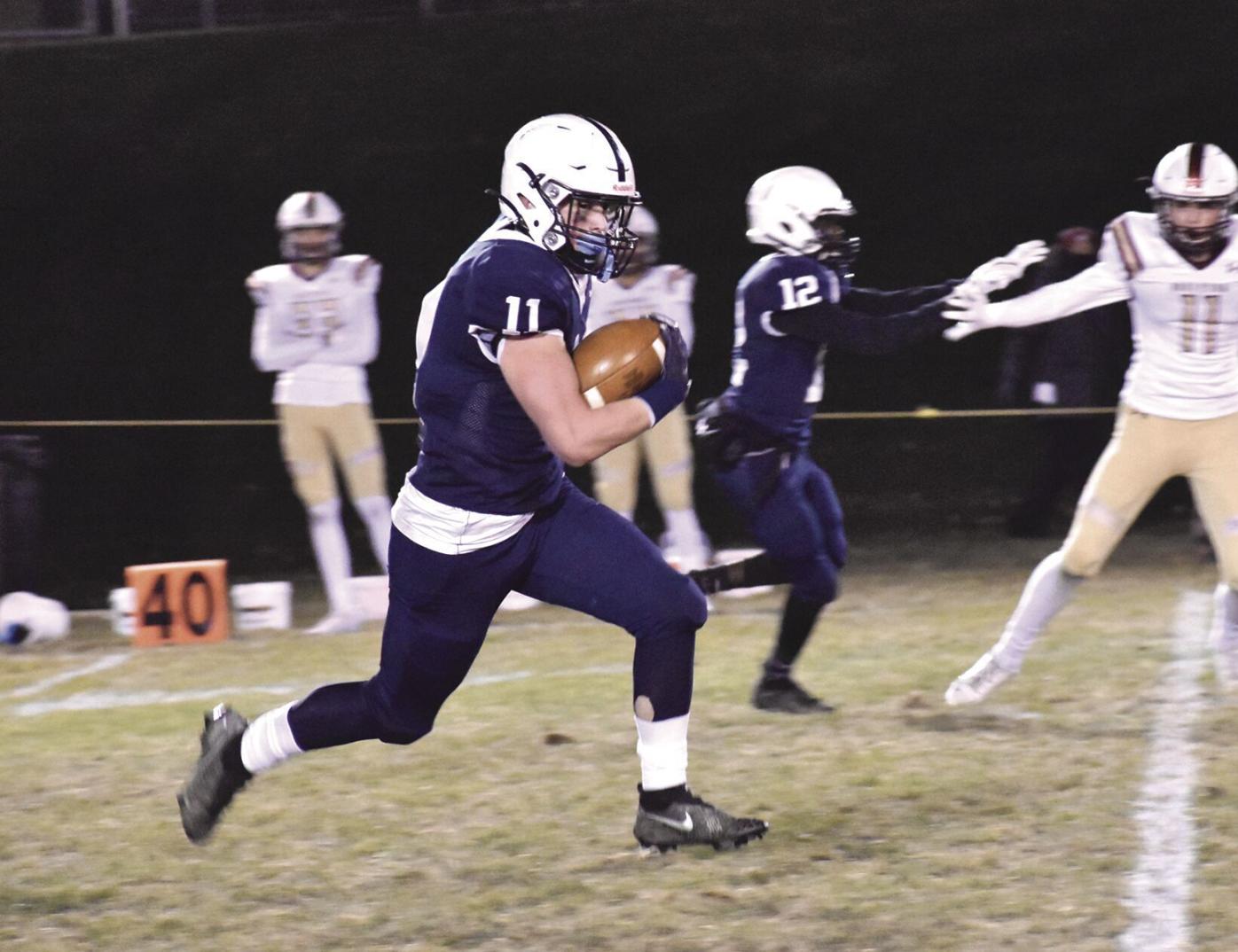 Lakeside Lutheran senior running back Micah Cody breaks off a 48-yard first-quarter touchdown run during Friday’s WIAA Division 3 Level 1 game against Edgewood at LLHS. The Warriors won 31-10 and Cody had 13 carries for 101 yards. 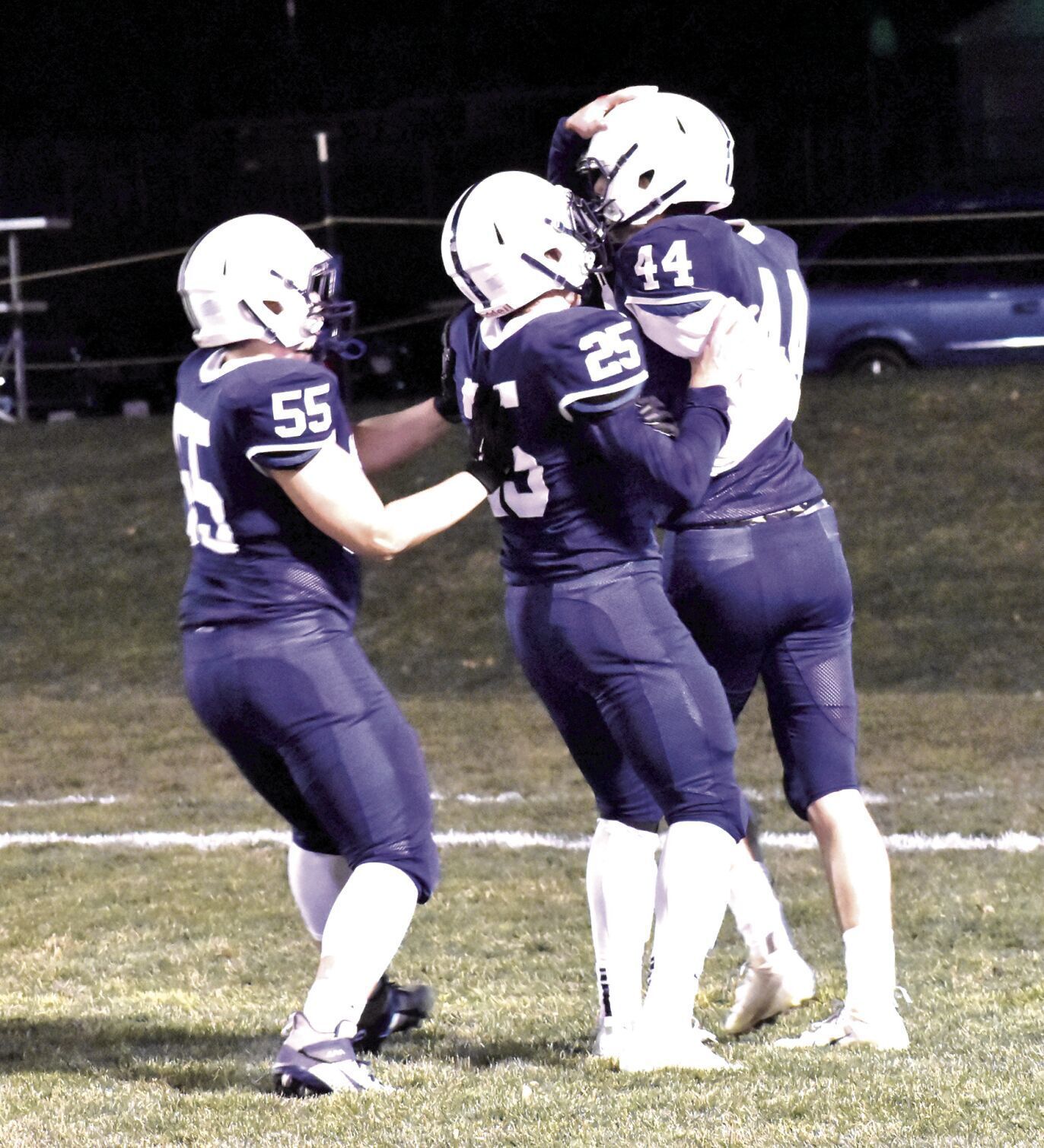 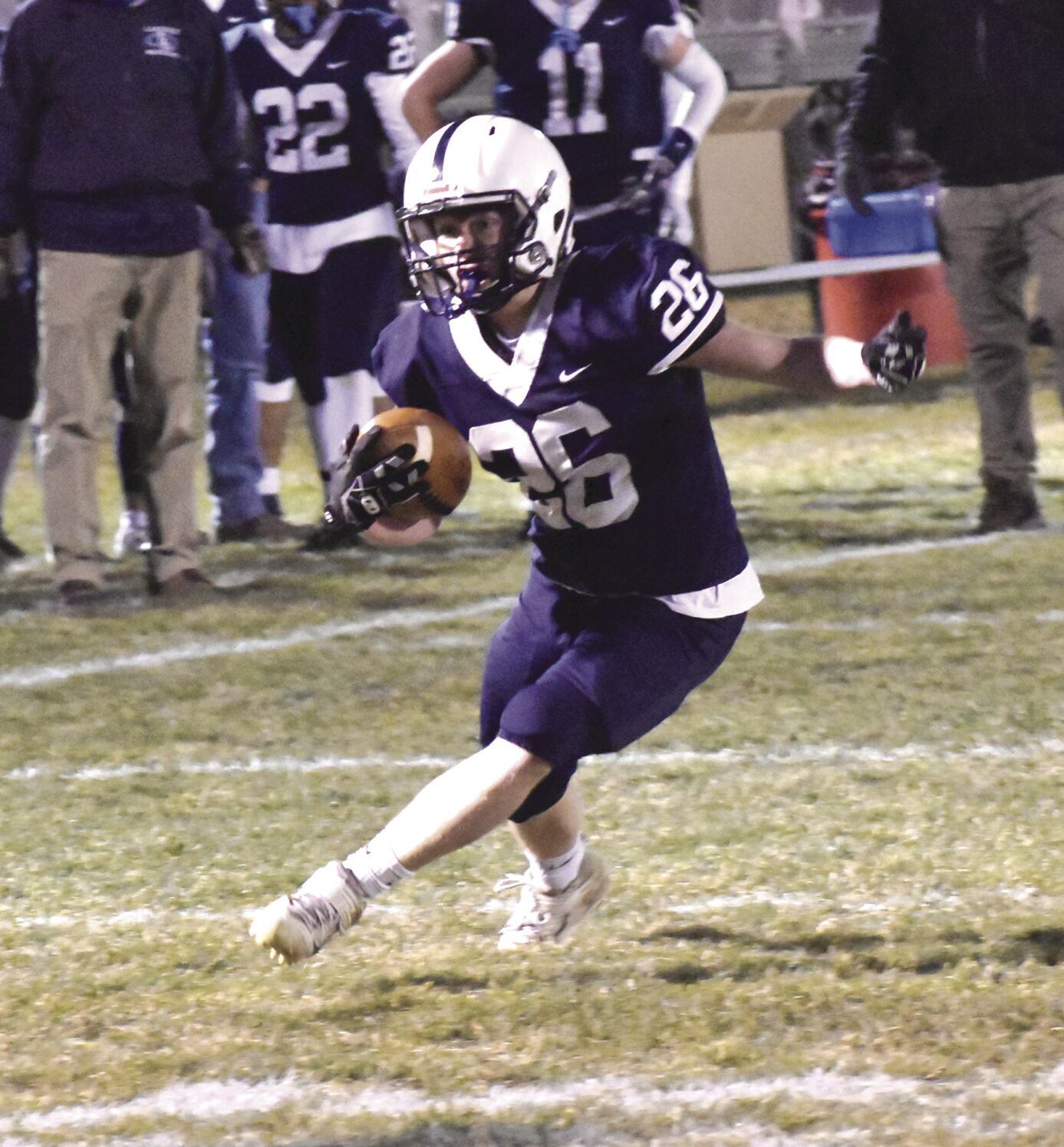 Lakeside Lutheran junior running back Spencer Sturgill cuts back on a first-half rush against Edgewood in a WIAA Division 3 Level 1 game at LLHS on Friday. The Warriors won 31-10. 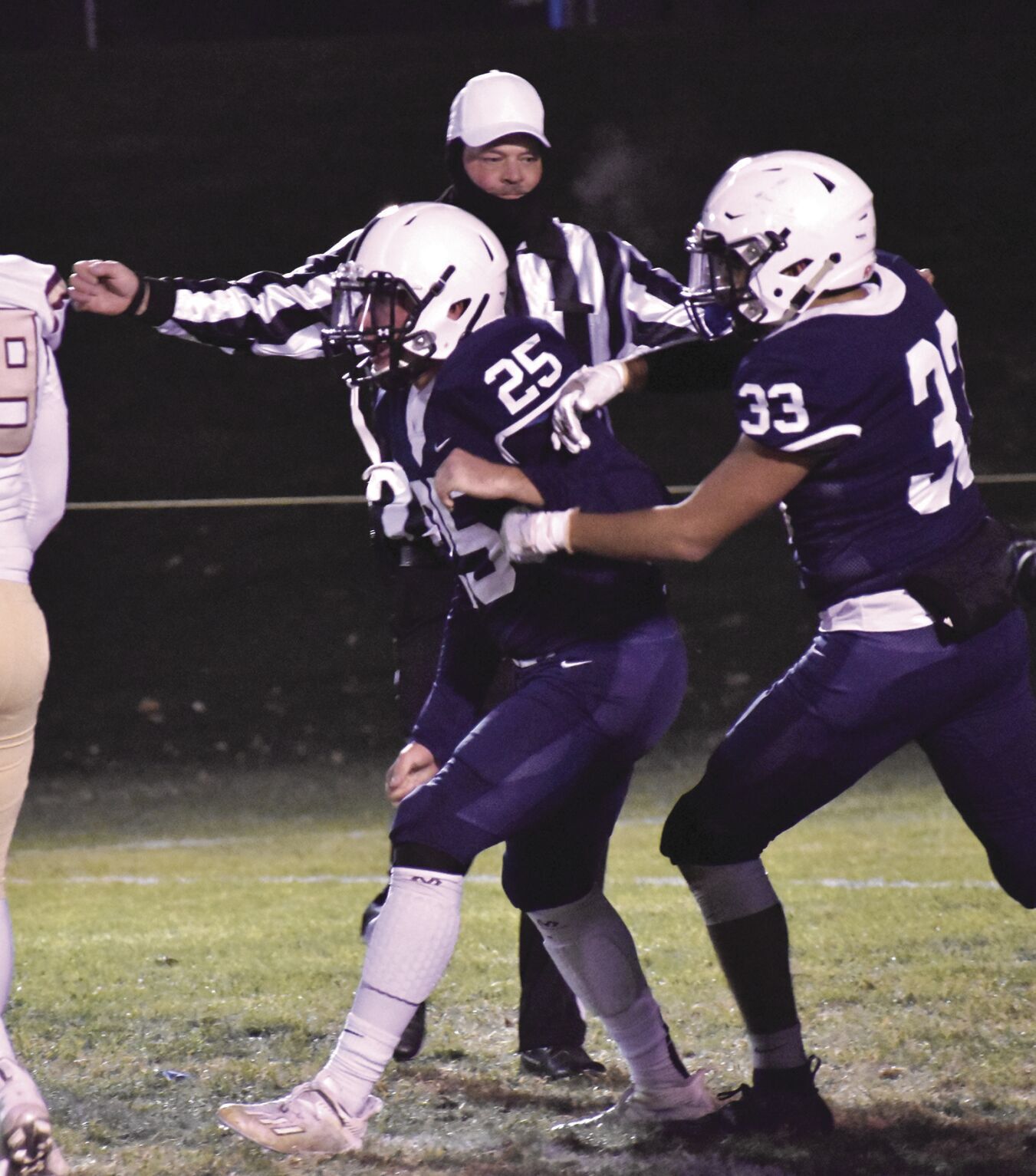 Lakeside Lutheran senior linebackers Ian Olszewski (25) and Jaden Madrid (33) react to Olszewski’s sack during the first half of a WIAA Division 3 Level 1 game against Edgewood at LLHS on Friday. The Warriors won 31-10.

Lakeside Lutheran senior running back Micah Cody breaks off a 48-yard first-quarter touchdown run during Friday’s WIAA Division 3 Level 1 game against Edgewood at LLHS. The Warriors won 31-10 and Cody had 13 carries for 101 yards.

Lakeside Lutheran junior running back Spencer Sturgill cuts back on a first-half rush against Edgewood in a WIAA Division 3 Level 1 game at LLHS on Friday. The Warriors won 31-10.

Lakeside Lutheran senior linebackers Ian Olszewski (25) and Jaden Madrid (33) react to Olszewski’s sack during the first half of a WIAA Division 3 Level 1 game against Edgewood at LLHS on Friday. The Warriors won 31-10.

Lakeside Lutheran scored two touchdowns in a 14-second span and then 10 more points in a mere five seconds.

And all this scoring was in the first quarter.

The top-seeded Warriors rode those 24 early points and six takeaways to a 31-10 WIAA Division 3 Level 1 victory over fourth-seeded Edgewood at LLHS on Friday, improving to 6-0.

“Our defense really came through early with two defensive scores,” Lakeside Lutheran football coach Paul Bauer said. “We turned it over unfortunately a few times in the first half. The defense responded with a couple of interceptions to hold them to three points.”

Lakeside senior tailback Micah Cody, who had 13 carries for 111 yards, slipped a tackle and busted off a 48-yard rushing touchdown with 6 minutes, 21 seconds to go in the first.

On Edgewood’s first play of the ensuing drive, senior defensive end John O’Donnell stripped sophomore running back Abe Thompson on a run to the outside and senior defensive back Tersony Vater returned it untouched 23 yards for a score to make it 14-0 with 6:14 remaining.

“The defense had a good night and we needed it tonight,” Bauer said. “I thought Edgewood’s defense played well. They had a good scheme against us. They took away what we like to do best.

“We still got 300 yards of offense. I never felt like we got anything consistent going and they were keyed on the dive back.”

Senior Brendan McKenna returned a low punt to the Crusader 28. After O’Donnell had a nine-yard grab and Edgewood committed a pair of pre-snap penalties, junior kicker Jameson Schmidt connected on a 27-yard field goal that made it 17-0 with 1:29 to play in the first.

Edgewood’s first play of the next drive went awry as Folkers and Thompson mistimed a handoff, leading to a fumble that O’Donnell took 20 yards the other way to paydirt. Schmidt’s point after made it 24-0 in the early going.

“We have been preaching all season to stop the run,” Lakeside Lutheran senior linebacker and quarterback Nathan Chesterman said. “We definitely did that and forced them into passing situations. When you know they have to pass it’s easy to defend one aspect of the game. When they are pushing the ball it’s harder to stop. The defensive backs and defensive line played well. It was good to see the defense step up once again.”

Folkers then had a 4th down and 6 pass at the Lakeside 40 batted down. The Warriors’ next drive was plagued by penalties and eventually led to a punt.

Folkers engineered an efficient drive that featured a run/pass mix to move into the red zone. Senior defensive back Brendan McKenna knocked down on a third-down throw on the sideline, forcing a 23-yard field goal that was good for Edgewood’s only first-half points with two minutes to play before halftime.

Edgewood (5-3) sophomore kicker Sam Klestinski had a well-placed onside kick attempt that a running Jackson Trudgeon nearly came up with. Lakeside, which moved up two spots to No. 2 in this week’s Associated Press medium-sized schools poll, recovered at the bottom of the pile and had it at a little shy of midfield.

Chesterman rolled out of the pocket and was intercepted as a defender jump in front of the receiver. Vater picked off a Folkers underthrow on the next play.

Lakeside, which fumbled on its first play from scrimmage, fumbled again with under a minute to go in the second. Vater then came up with the second of four Folkers interceptions.

“I don’t think bye weeks are particularly friendly to high school football teams,” Bauer said. “Penalties and turnovers reflect that. Proud of our kids the way they hung in their tonight. It was a physical game especially in the second half. I’m proud they hung in there and kept their composure pretty well.”

Cody scored on the ground from 12 yards out in the final minute as the Warriors ran it 47 times for 242 yards. Chesterman had 77 yards on 24 totes.

“We definitely got a ton of help from the defense doing their thing,” Chesterman said of the offense. “We made some mistakes. The defense helped us out with takeaways and getting the ball back when we needed it. I thought we moved the ball well with the exception of the turnovers. The line was making good blocks. We kept moving the ball. Coaches preach to trust the veer and that’s something we are embracing. Trusting the offense and each other helps get things rolling.”

Senior linebacker Christian Schmidt and Chesterman each had an interception in a game that included 10 turnovers.

The Warriors have won their playoff opener three seasons in a row while the Crusaders have not won in the postseason since 2011.

UP NEXTLakeside hosts second-seeded Lake Mills, which beat third-seeded Mauston 56-20 on Thursday as it stands now, in Level 2 for a regional championship to conclude the season.

“Enemy number one for the week is to beat COVID and be able to play,” Bauer said. “One of the fun things about the season is to play new teams, but we’re happy to play them. We have a lot of things to work on and fix.”

“Lake Mills will come out with enthusiasm and fire especially with it being an in-town rival,” Chesterman added. “It’s been a fun season to play and it’ll be exciting to top it off with Lake Mills.”