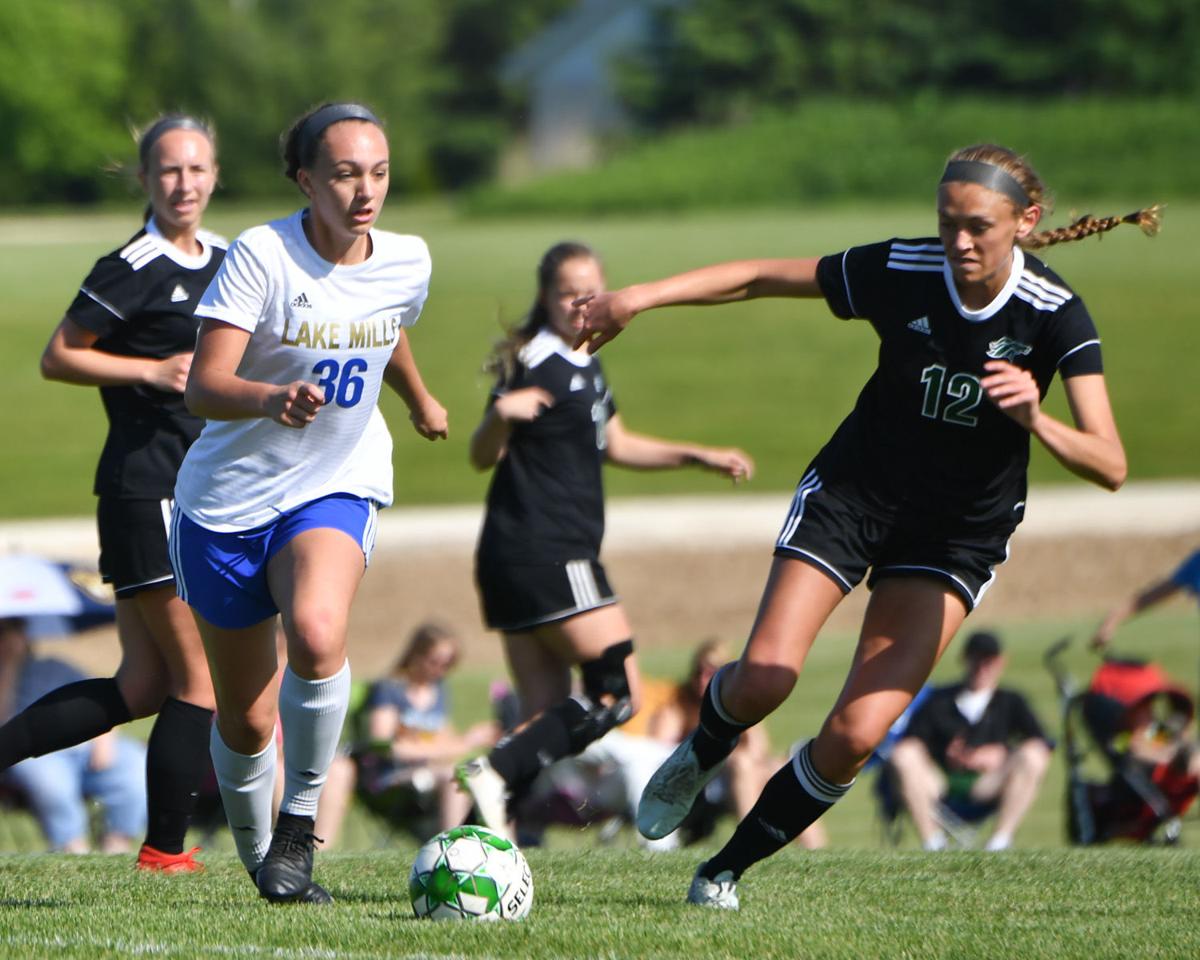 Ava Stelter (36) was the leading scorer and team captain for the Lake Mills girls soccer team as a freshman. Stelter tore her ACL playing soccer in the off-season. 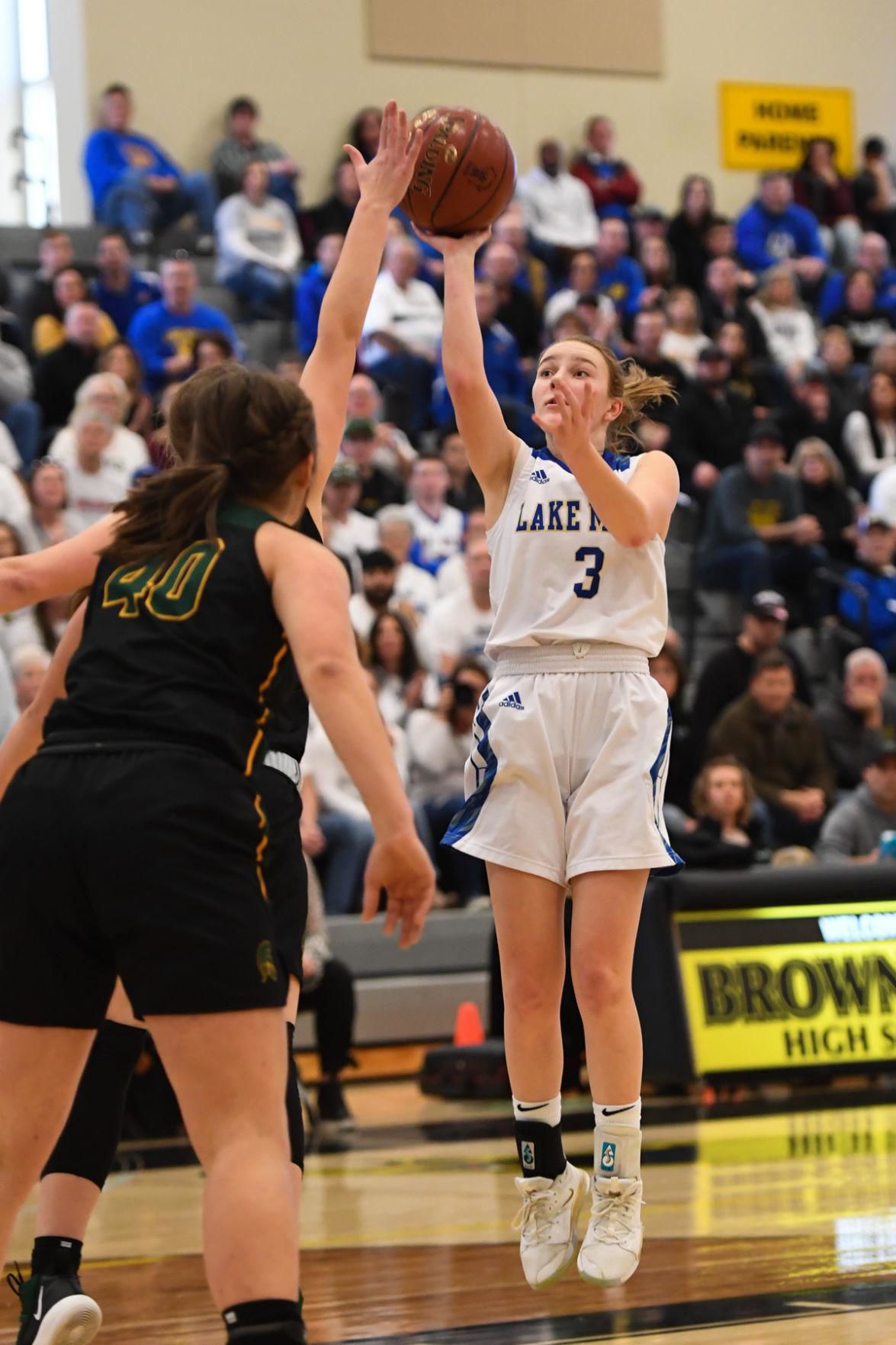 Julianna Wagner earned Capitol North Player of the Year honors as a sophomore and a junior. Wagner tore her ACL during a WIAA Division 3 state semifinal on March 12. 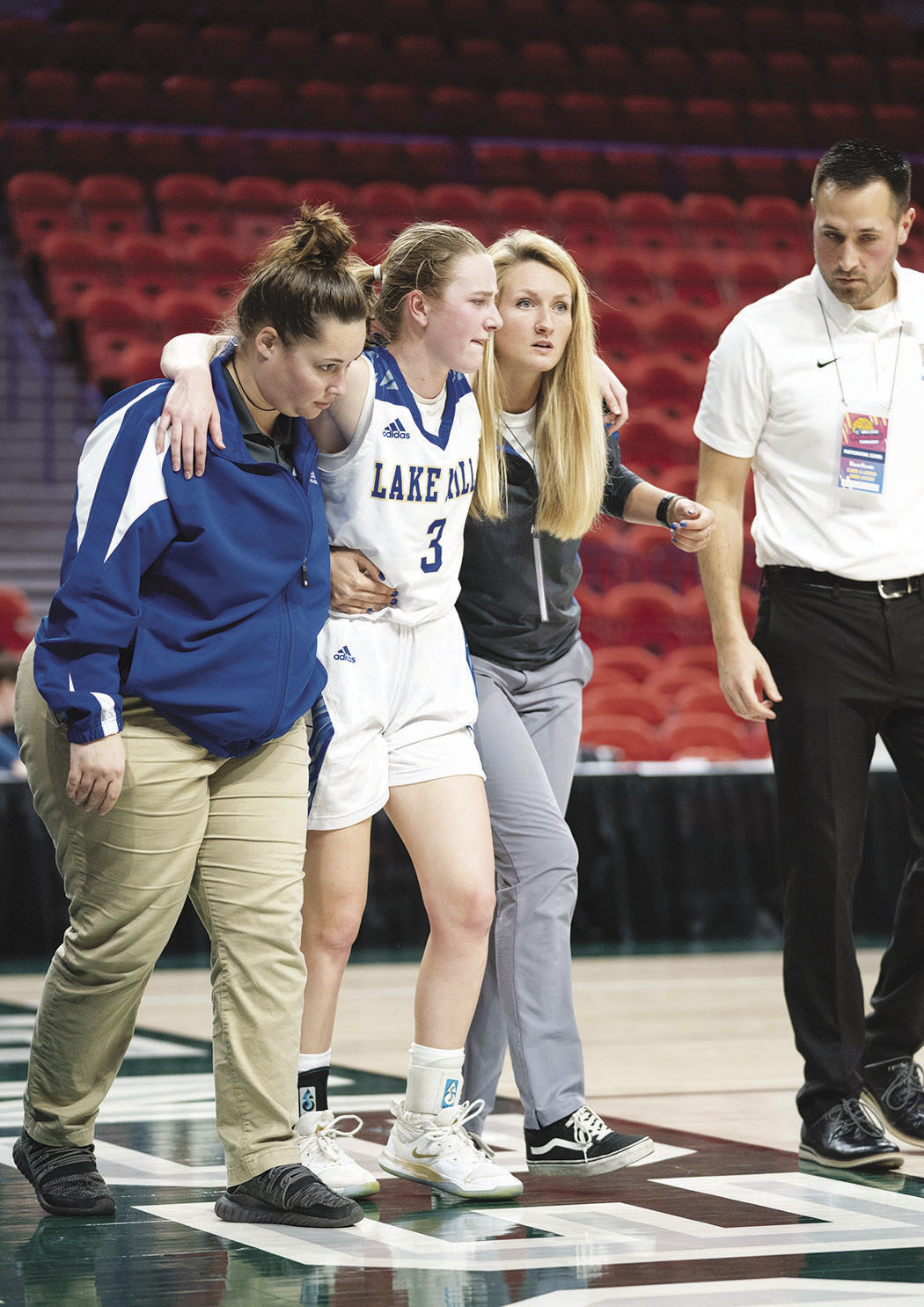 Ava Stelter (36) was the leading scorer and team captain for the Lake Mills girls soccer team as a freshman. Stelter tore her ACL playing soccer in the off-season.

Julianna Wagner earned Capitol North Player of the Year honors as a sophomore and a junior. Wagner tore her ACL during a WIAA Division 3 state semifinal on March 12.

Ava Stelter was getting ready to go to personal therapy to rehabilitate her knee after tearing her anterior cruciate ligament when she saw it.

Stelter, a Lake Mills sophomore, saw her soccer teammate Julianna Wagner attempt to do a jump stop during a WIAA Division 3 state basketball semifinal and then she buckled to the court.

The next day, an MRI revealed Wagner had torn her ACL.

“I was sitting on the couch with my dad when it happened and we both looked at each other,” Stelter said, “and I started to get emotional. I felt the same way for her immediately that I felt when it happened to me. I hoped it wasn’t the case, but deep down I knew.”

Stelter, who was being recruited to play NCAA Division I soccer as a freshman in high school, has had teammates tear their ACL. She enrolled in training as a 10-year-old to build the muscles around the knee to reduce the risk of suffering the injury that disproportionately affects more female athletes than their male peers.

Females experience 8.9 ACL injuries per 100,000 athletes exposed in “sex-comparable sports” compared to 2.6 for their male peers, according to research published by the National Health Institute in 2013.

“The majority of ACL injuries occur without contact,” said Emily Shepley, a doctor of physical therapy at Fort HealthCare and an assistant coach for the Fort Atkinson girls basketball team. “It usually occurs while landing from a jump, cutting or decelerating with a change of direction. The ACL in under the most stress when the knee is in extension and the leg is internally rotated.”

The reason females are more likely to suffer from ACL injuries is related to the anatomical structure of their hips and knees.

“Females often tend to land from a jump in a more erect position, placing the knee in more extension,” Shepley said. “Due to a wider set pelvis in females, along with poor hip strength that is often accompanied, greater internal rotation of the lower extremities is also seen with landing. This places the ACL in a more vulnerable position. The research has also shown that females often take longer to activate hamstring muscles and are more quad dominant than males. Hamstring muscles are a stabilizer for the knee and when not activated properly can increase the risk for an ACL injury.”

With that knowledge, schools around the area such as Lake Mills, Jefferson, Fort Atkinson and Whitewater have implemented or are going to implement plans to help prevent the risk of injury to their student athletes.

Fort Atkinson specifically offered a summer-school program in conjunction with Fort HealthCare in 2019 for any athlete who wanted to attend to learn about ways to prevent injuries. Jefferson coaches incorporate strength and conditioning practices to attempt to overcome some of the anatomical differences in the female body compared to the male body that contributes to the injury.

In Whitewater, athletic director Justin Crandall said the school intended to implement a program with Mercy Health that would address the challenges.

“Before the pandemic, we were going to incorporate that as part of our daily warm up this season,” Fort Atkinson softball coach Brian Bosch said. “We were planning to have them there to make sure we were doing things the right way, but also understanding why it was important.”

Bosch said he was aware of the anatomical challenges inherent with competitive sports for women, but it wasn’t until the Fort Atkinson athletic department started seeing multiple athletes go down with the same injury in a short period of time.

Lake Mills soccer coach Jeff Hegstrom said in his 10 year coaching, his recognition of the problem has grown. That’s part of the reason the team, like other teams in the area, have made sure to implement a dynamic warmup focused on proper movements of joints throughout the body.

“When I stepped into the girls role, I saw year after year, girls tear their ACL, whether that be on our team or on other teams,” Hegstrom said. “As time has gone on and now I’ve come back to coaching, we’ve done more of the strengthening piece for sure. We’re starting to work in Yoga routines for pre-workout and cool down after the muscle groups have been worn through.”

In a world when school districts are encouraging athletes to compete in multiple sports instead of specializing in one, cross training to avoid repeated wear and tear on specific muscle groups takes center stage in the ACL conversation. But cross-training isn’t the only way to reduce risk of the injury.

Shepley helped Fort Atkinson High School incorporate ACL-specific strength-building exercises into its warmups for pre-game and pre-practice routines. She said the specific movements fit into a normal routine of stretching and preparation for athletic competition.

“As an athlete, one of the best things he or she can do is work on strength and body control,” Shepley said. “Athletes should focus on improving their hip, core and hamstring strength as well as proper landing during cutting, decelerating and jumping.”

Perhaps the best way to avoid the injury is to not compete, but coaches of non-contact sports like cross country aren’t sounding that alarm either. Jefferson cross country coach Megan Carstens, who has coached the Eagles since … said conversations about injuries in contact sports has come up with athletes who have discussed their plans for the non-cross country seasons in a school year.

Avoiding injury is a common conversation, but Carstens pointed out that there are a lot of positives to playing other sports.

“I’m in favor of them being multi-sport athletes,” Carstens said. “That’s a great thing in Jefferson, we really encourage them to play multiple sports and playing different sports is wonderful, because then you’re not as at risk for a shin splint or tendonitis. Every couple years, a girl will come to me and tell me they aren’t sure they want to continue playing contact sports. I hear them out, and I listen; but I make sure they know there are a lot of risks in life and that I understand they’re passionate about running but they need to think about the bigger picture.”

When Stelter saw Wagner injure her knee on TV, Stelter had been in the post-injury world for six months. Stelter said she had multiple former teammates suffer from ACL injuries before her and hoped that she could do enough strength and conditioning to avoid the injury.

The injury for Stelter was a tackle she said she’d done, “a million times,” in drills and in games.

Whether Wagner was in denial or not wasn’t clear, but it took a day for her to get an MRI to know exactly what had happened.

Now, both athletes talk about the injury in detail: Stelter went into great detail explaining how her hamstring was more developed than her quadriceps and her ACL attempted to counter to decelerate the leg only to “pop”; Wagner knows that when she did her jump stop, too much of her weight came down on the inner-half of her knee and it buckled.

Stelter’s college recruitment hasn’t been affected by the injury: She’s still going to her dream school.

On the other hand, Wagner, a two-time Capitol North Conference Player of the Year, was hoping to showcase her abilities this summer to move up the recruiting ladder.

“It definitely sucks because I can’t be in the gym doing the things all the other girls are doing,” Wagner said. But workouts and repetitions around the nation are stalled for everyone during the coronavirus pandemic. “I’m trying not to let it affect me but it definitely does mentally.”

Returning to full health, obviously is the main goal. Learning to persevere and work through an injury of this magnitude builds character and both Wagner and Stelter expect to put those lessons to good use.

“It’s good to know that there are people who have had this injury and they’re back doing what they were able to do before they were injured,” said Wagner specifically of Lake Mills teammate Kayla Will and other athletes she’s spoken with about the injury. “One good thing about (the pandemic) is that I haven’t had to worry as much about school, so I could get my rehab done and focus on that.”

“I was sitting on the couch with my dad when it happened and we both looked at each other,” Stelter said, “and I started to get emotional. I felt the same way for her immediately that I felt when it happened to me. I hoped it wasn’t the case, but deep down I knew.”