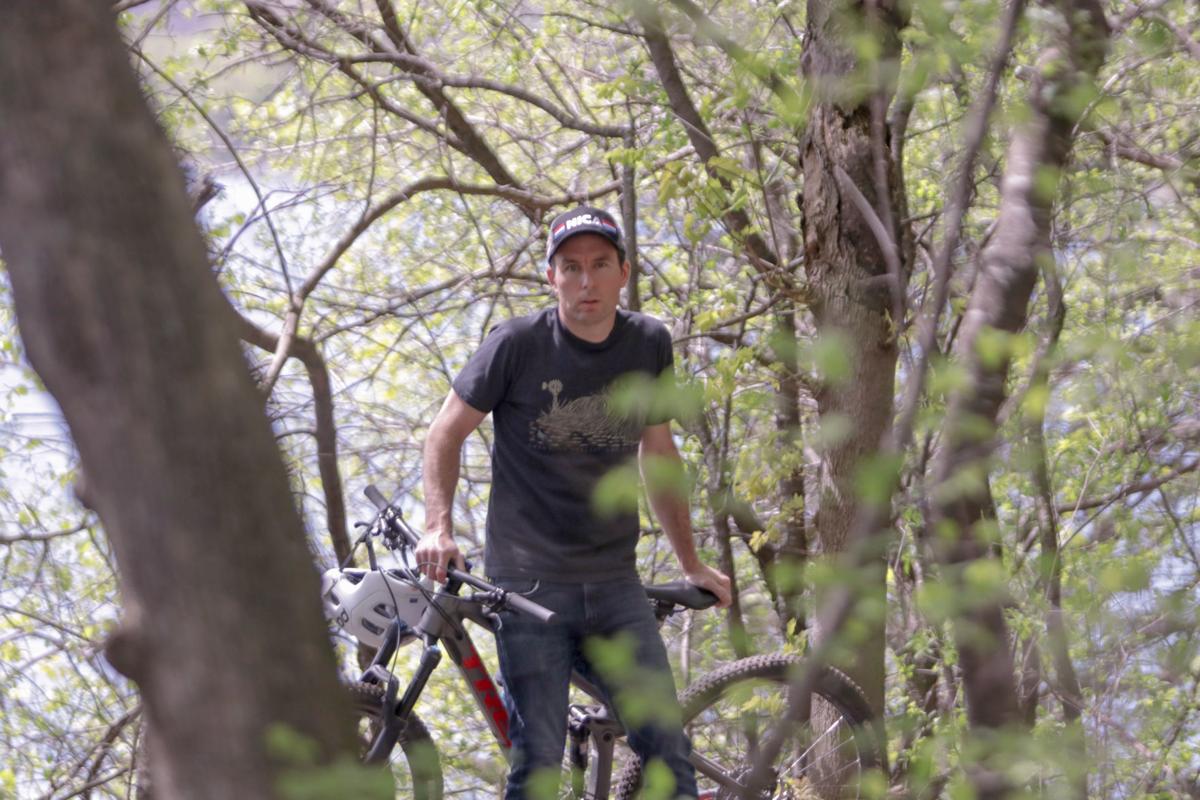 With approval from the City of Lake Mills Parks & Forestry Department, Tony Cooke has volunteered his labor to build mountain bike trails through the previously undeveloped Tyranena Park. Cooke’s work was put on hold during the pandemic and is waiting to be officially permitted to get back to work. 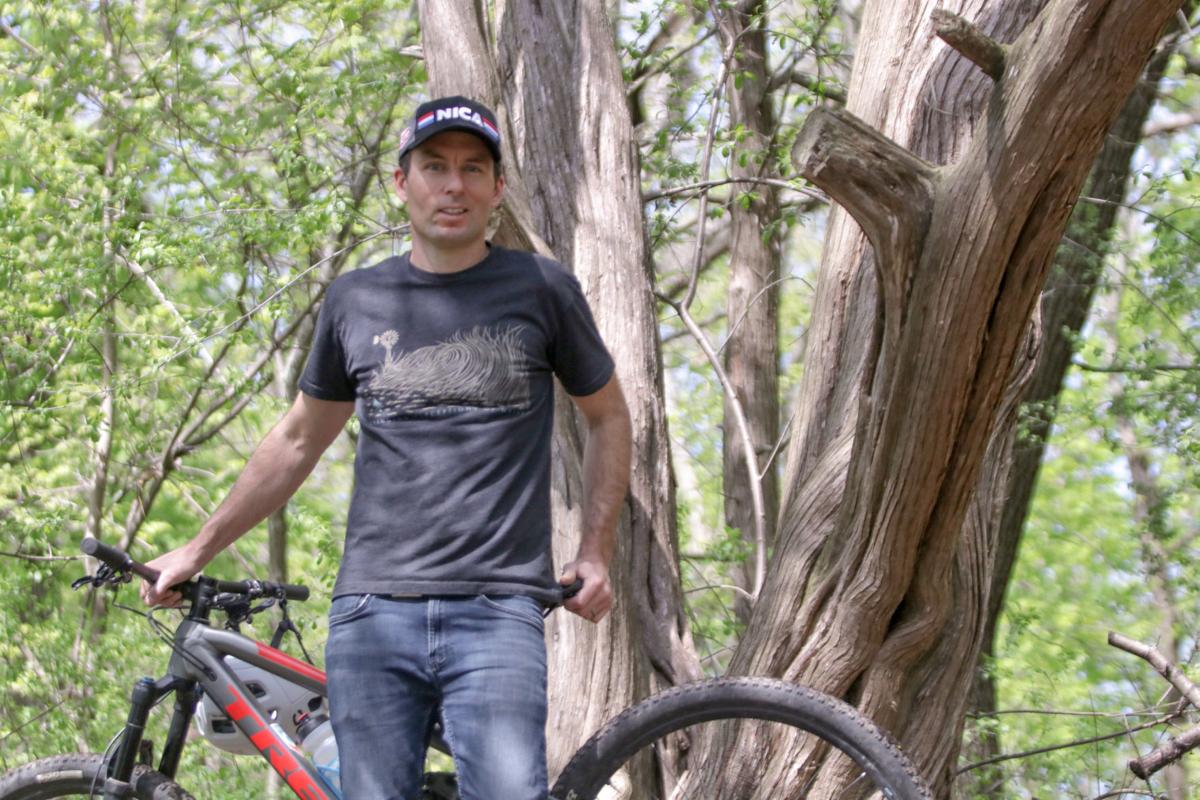 Tony Cooke stands in front of a cedar tree that was previously surrounded by buckthorn at Tyranena Park in Lake Mills. Cooke’s work building mountain bike trails in the previously undeveloped park has been put on hold waiting for official permission to reconvene maintenance during the pandemic.

With approval from the City of Lake Mills Parks & Forestry Department, Tony Cooke has volunteered his labor to build mountain bike trails through the previously undeveloped Tyranena Park. Cooke’s work was put on hold during the pandemic and is waiting to be officially permitted to get back to work.

Tony Cooke stands in front of a cedar tree that was previously surrounded by buckthorn at Tyranena Park in Lake Mills. Cooke’s work building mountain bike trails in the previously undeveloped park has been put on hold waiting for official permission to reconvene maintenance during the pandemic.

Mountain biking has been climbing as a popular form of recreation as the CamRock Composite bike team has taken root in Jefferson and Dane County over the last decade.

Athletes from Monona Grove, Fort Atkinson, Lake Mills and Cambridge among other communities in the area compete on the team. Each of those communities has varying level of available trails to ride on.

Tony Cooke is one of a dozen coaches for the CamRock Composite team — Pete Sonnetag is the head coach. Cooke is the Lake Mills team contact and he saw an opportunity to volunteer to install a mountain bike path at Tyranena Park in the City of Lake Mills that would serve as a trail for people of varying skill level to exercise while cruising through the glacial kettles along Rock Lake.

Using a flat-ended spade, Cooke designed the trails to consider erosion, moderate speed of cyclists and guide hikers through parts of the park previously undeveloped.

The work on the trails has been suspended during the pandemic and will not reconvene until addressed at a City of Lake Mills parks board meeting.

In most places, the bike bath is roughly two feet wide and runs against the grain of the hill. The reason the path is not riding with the terrain as the paths used by fishermen and hikers seeking to engage with Rock Lake is to avoid water repeatedly following those trails and washing out into the water. Trails that lead directly to the lake aid water in promoting erosion.

“Everything we do is with erosion in mind,” said Cooke, who also serves as a head coach for the Lake Mills boys soccer team. “The ways we cut the paths are not to allow water to collect and puddle, instead we cut the paths so that water continues to travel down the lake without washing out the hillside.”

As water drains naturally toward the lake, it is not impeded by the trails.

Nodding Trilliums, which are a native species to Wisconsin and are threatened by wild garlic mustard seed, are plants rooted in the southern kettle of the park. The bike path turns north a foot and a half before the rare plants.

In a letter to the editor, Hope Oostdik emphasized the rarity of the nodding trilliums on May 20. The plants are not registered as growing in Jefferson County, according to a map developed by University of Wisconsin-Extension, though there are areas with the plant

Oostdik is the chair for the Town of Lake Mills and expressed concern for the survivability of the plants in the park.

“It is disheartening to see a very valuable natural area developed into a myriad narrow trails cutting through the trees, shrubs and native wildflowers, up and down through the glacial kettles leaving very little of the park as I observed it in the past,” Oostdik said in the letter.

On the other side of the bike path in the park are wild garlic mustard seed, which are an invasive white flowering plant that gives off an odor fitting of its name. The plants are dangerous to the natural habitat.

In the kettle to the north of the nodding trilliums is an ever-expanding assortment of European buckthorn, an invasive tree species that was initially brought to the United States to serve as a “living fence,” according to the Minnesota Department of Agriculture. Buckthorn invades the understory of a wooded area and prevents seedlings from taking root naturally, according to the Wisconsin Department of Natural Resources.

Cooke said he considers his contribution of the mountain bike trail to be two-fold: On one hand, it provides recreational opportunities for people to maintain a healthy lifestyle and on the other other hand, it increases the environmental awareness for people.

“That cedar tree (up on a hill in the park) was surrounded by buckthorn and you really couldn’t see it,” Cooke said. “We were able to clear that out and it really is one of the best parts of this park.”

Cooke speculated removing the remaining buckthorn would provide parkgoers with an improved view of the lake as they’re in the park instead of needing to be down the hill on the beach of Rock Lake to fully view the lake.

As the CamRock Composite mountain biking team continues to grow, more participants travel to Cambridge for practices at CamRock County Park east of Cambridge. Cooke said he was hoping to see this park serve as an area for the sport to continue to grow and for athletes to practice.

“Everything we do is with erosion in mind. The ways we cut the paths are not to allow water to collect and puddle, instead we cut the paths so that water continues to travel down the lake without washing out the hillside.”

What were you thinking??? Mountain biking and trail-building destroy wildlife habitat! Mountain biking is environmentally, socially, and medically destructive! There is no good reason to allow bicycles on any unpaved trail!

Bicycles should not be allowed in any natural area. They are inanimate objects and have no rights. There is also no right to mountain bike. That was settled in federal court in 1996.

My reaction to the trail carving in Tyranena Park was elevated from curiosity to alarm when I paused my dog walking to speak with a family on the path by the lake. The family included a man/wife, four small children and two dogs. Our conversation was halted by a cyclist who raced toward us and then veered up into the woods to avoid us - the point being that this is not a "development" of the park, it is a conversion. The park is not suited for both pedestrian and sport cyclists - it is one or the other. A dog walker, fisherman, or families with children (including educational nature outings with school children) would be hazardous to the point of foolishness to utilize the park under current circumstances.

It is also ecological arrogance to position this natural forest as "under-developed" - for whom? Historically, its benefactors clearly intended this pristine wildlife forest to be a preserve amid the bustle of the city, not a sport playground. Further, these principles are articulated in the DNR's (NR 1.25) "Generally accepted forestry management practices.", which include, "...the application of ecological, physical,...protection, and conservation of forest ecosystems to meet specified wildlife habitat, watershed, aesthetics, cultural and biological goals and objectives while maintaining the productivity of the forest." It is beyond a stretch of the imagination to fit an off-road bicycle course into this definition.

No, I do not want the forest cleared for a better view of the lake. No, I don't buy that the carving of the subsurface of the forest somehow improves water drainage - it results in rivers of mud that are impassable by pedestrians and cyclists alike and no, I have rarely experienced an ecological intervention of this type result in a benefit to nature. Nature benefits and thrives upon its own internal balance - preservation of that balance is dependent upon less intervention, not more. Ignoring this primal principle results in a degradation of the human condition, including cyclists.

There is a Parks Committee meeting on June 17th at 5:30p for public comment. I'll be there. I hope that mine is not the only voice heard.