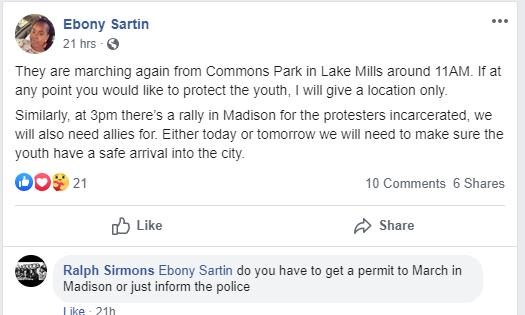 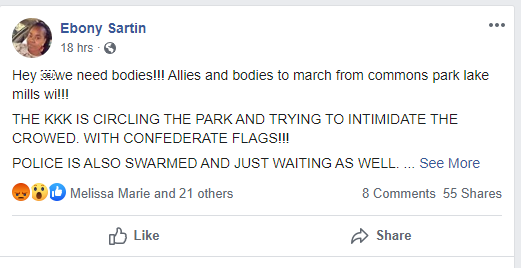 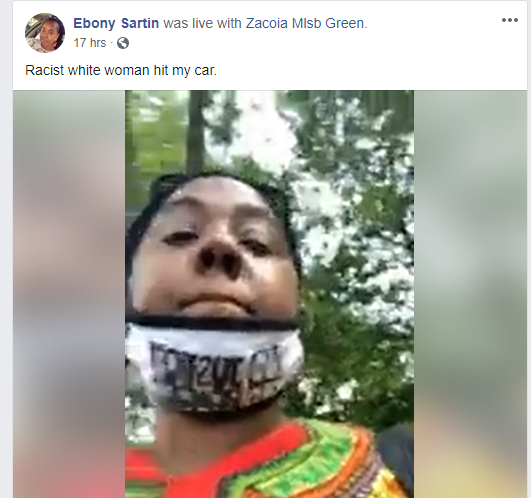 The Black Lives Matters protesters marching through Lake Mills Thursday and Friday were a mostly peaceful gathering, but organizers of the group have taken to social media saying “racist” people from Lake Mills caused a car accident.

On Thursday night the group of protesters arrived in Lake Mills at about 3 p.m., partially blocking streets.

“When they got here on Thursday night they marched around downtown and pounded on windows,” said Lake Mills Police Chief Mick Selck. “We didn’t know they were coming to Lake Mills until they turned off of Highway 18. They were at Harvey Rd. when we found out. Vehicles picked them up and brought them the rest of the way.”

“They set up at Commons Park. There were about 30-40 people and after an hour they got up and cut across the park and walked into the street by the winery. Chanting and yelling”

The group then went over by El Mariachi, past the former Sentry store to City Hall.

“They went to the Mobil station and were chanting and yelling.”

Selck said protesters took a back the badge sign at the gas station.

Protesters went back to the park where they cooked out and gave extra food to the police officers.

The group left Lake Mills about 9 p.m. on Thursday night and came back Friday to continue their march.

A minor car crash occurred around 2:30 p.m. on Friday.

“Yesterday afternoon (Friday, July 3) the organizer of the Black Lives matter protest ‘was parked at the park, downtown near El Mariachi, she was backed into a parking stall and a vehicle was parked on her left had an obstructed view pulled out and there was a car passing by she hit it when she pulled out,” Selck said.

The Black Lives Matter protester has since taken to Facebook in a video saying a “racist white woman” in Lake Mills hit her on purpose.

“There was an officer driving by and has the whole thing on video. The officers made contact with her, she didn’t request any medical assistance. It was a normal standard car crash,” Selck said. “The woman has gone online and created a narrative using a false name to say a racist white woman ran into her downtown. She was trying to get people to come to Lake Mill at that time. She said she needed medical assistance said an officer drew a gun. There are people searching to find this woman online. It’s implied they are going to do something to her.”

The Lake Mills Community Network on Facebook and a group focused on Racial Justice have had posts taken down.

“We have people in the community who have bought into the narrative,” Selck said. “This has blown up the Lake Mills Community Network and the Racial Justice Facebook page.”

“Just about everything she said was a lie and it was made to incite people.”

“This is part of what I talked about at the park was how Facebook and social media can create this firestorm and no one is checking the facts.”

“Each connection with the woman and police was positive. Then she goes on social media and is opposite,” he said.

“Somebody posted they had a picture of the ladies license plate was trying to search and find this ‘racist woman.’ The organizer said on social media, ‘Lake Mills has not seen the last of me yet.’”

Selck also pointed out the protester is using an alias online.

“The victim of this incident is the person who was run into. This person needs to be scared for their safety and some people in Lake Mills are perpetuating that,” he said.

“I don’t like our city being in turmoil, especially when it’s not true.”

At about 4 p.m. Friday the group left the city.