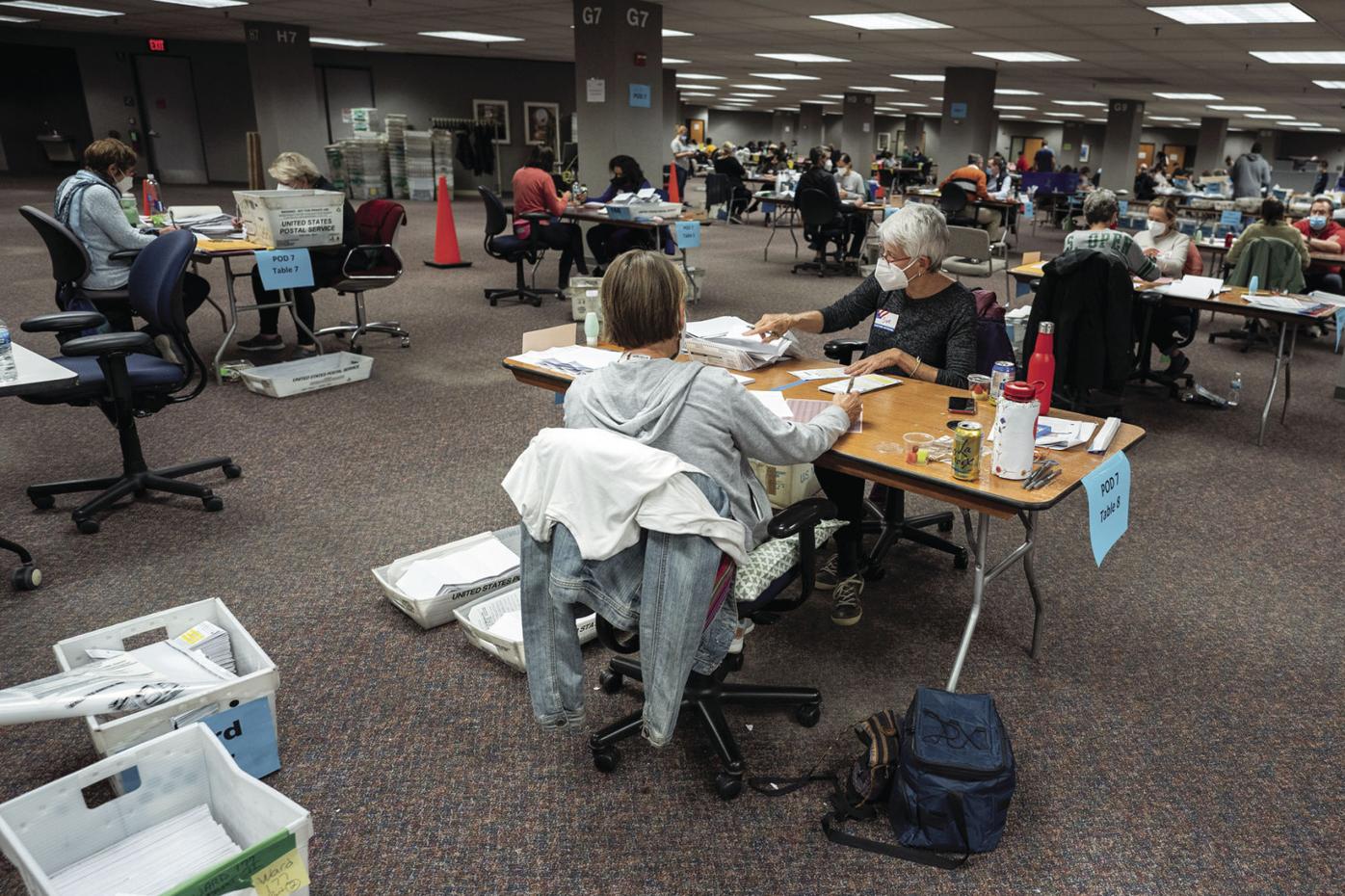 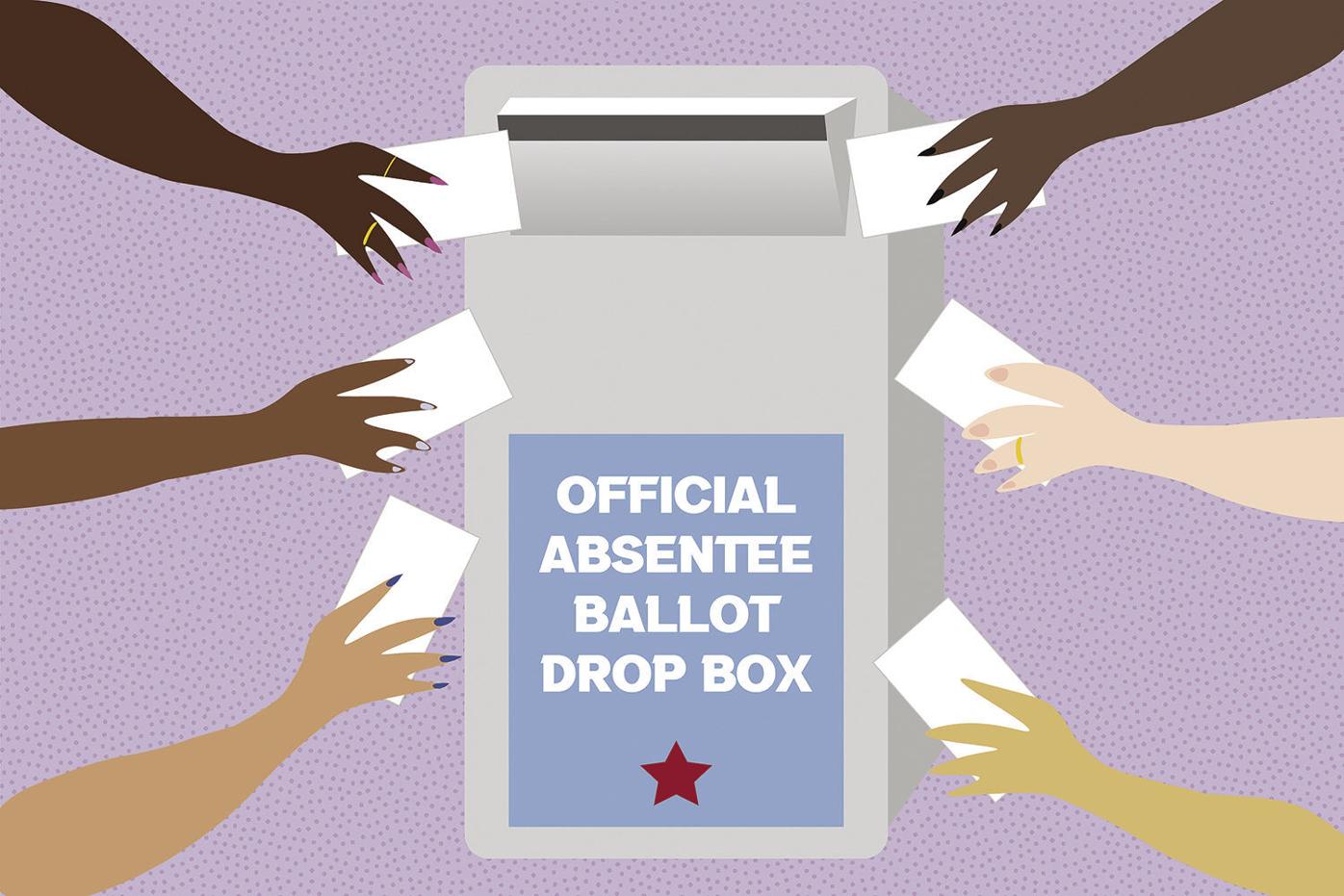 Nearly 2 million Wisconsin residents voted absentee in this election, depositing their ballots in the mail, in a drop box or using early in-person voting sites. 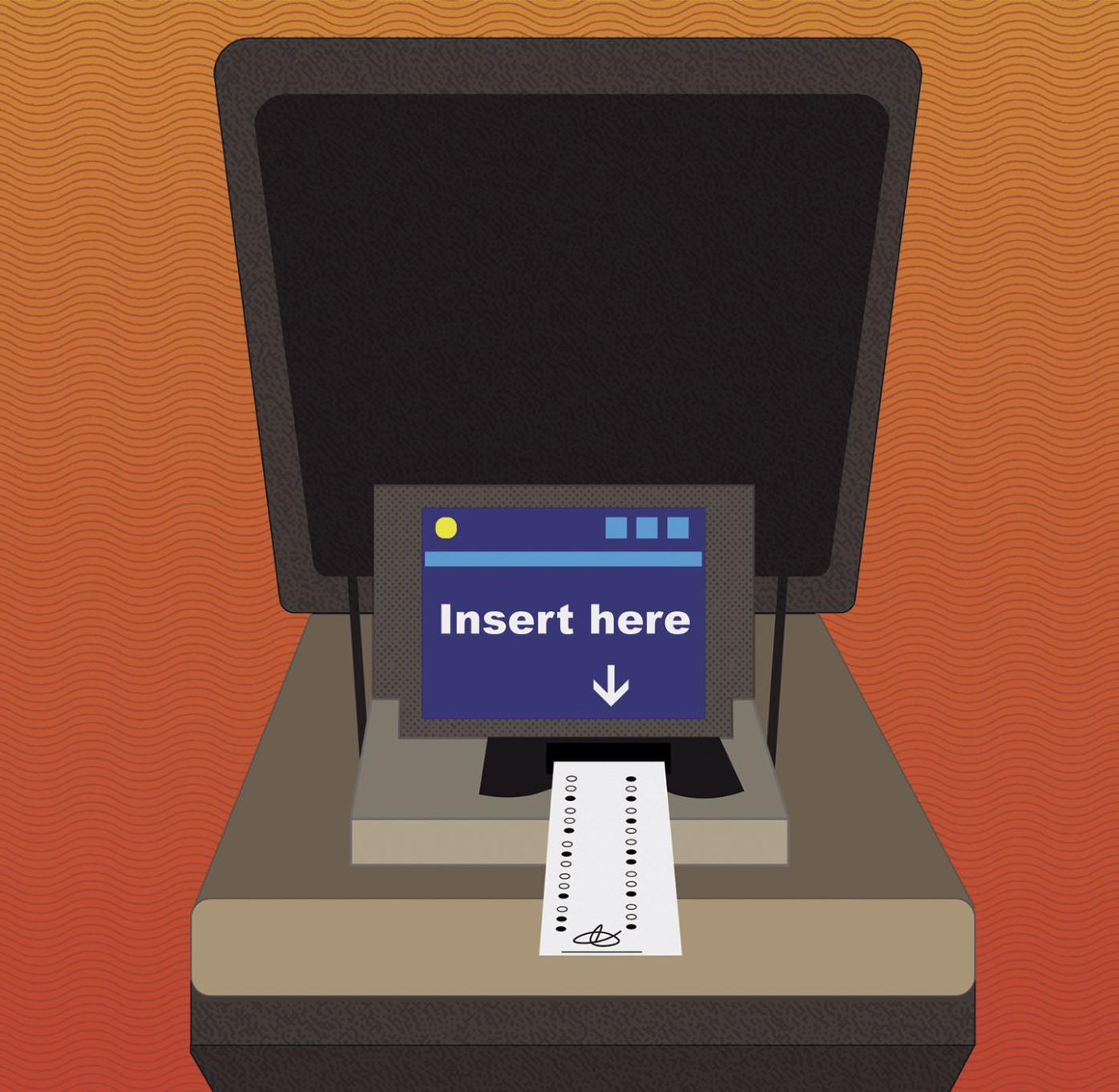 Absentee ballots are processed at a polling place or central count facility starting at 7 a.m. on Election Day. The name and address of each voter is read off by election workers before they’re tabulated by voting machines. 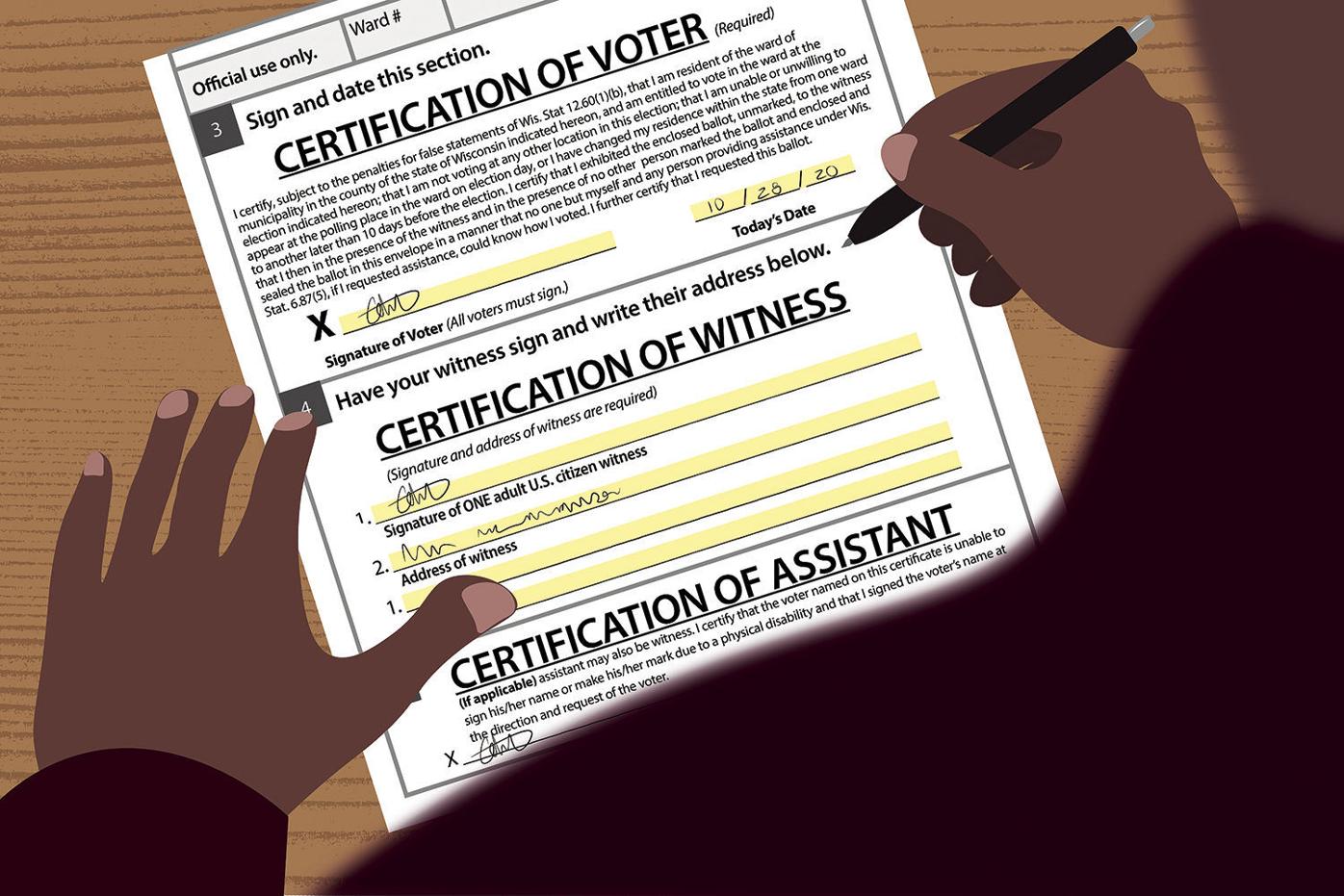 Election workers certify that voters have filled out their absentee ballot envelopes correctly, including their signature, witness signature and witness address. Ballots can be rejected if these fields aren’t filled, although workers are allowed to fill in the witness address if they can locate it in their database.

Nearly 2 million Wisconsin residents voted absentee in this election, depositing their ballots in the mail, in a drop box or using early in-person voting sites.

Absentee ballots are processed at a polling place or central count facility starting at 7 a.m. on Election Day. The name and address of each voter is read off by election workers before they’re tabulated by voting machines.

Election workers certify that voters have filled out their absentee ballot envelopes correctly, including their signature, witness signature and witness address. Ballots can be rejected if these fields aren’t filled, although workers are allowed to fill in the witness address if they can locate it in their database.

This article is made possible through Votebeat, a nonpartisan reporting project covering local election integrity and voting access.

A week after the Nov. 3 election, Wendy Helgeson said she still was being jolted awake by dreams of sorting through ballots.

The head of the Wisconsin Municipal Clerks Association and a clerk in the town of Greenville is one of 1,850 municipal clerks who have grappled with the stressful realities of this year’s election, from a surge in absentee votes to abundant falsehoods about election results. Despite that, Helgeson feels confident in the veracity of the results.

“With the checks and balances in place, it would be really hard to try to commit fraud and then get away with it, ultimately,” Helgeson said.

Wisconsin is one of a handful of states that prohibit election workers from processing ballots before 7 a.m. on Election Day. In municipalities facing a mountain of absentee ballots, such as Milwaukee, this meant that some workers stayed at their posts for close to 20 hours.

“The result of the election was not terribly different from four years ago; it went to the Democrats rather than the Republicans, but Wisconsin remains a narrowly divided state,” said Barry Burden, director of the Elections Research Center at the University of Wisconsin-Madison. “I think election officials managed to operate in that highly partisan environment quite well.”

The lifecycle of a ballot

Tracking the journey of an absentee ballot — from registration and requesting the ballot to being fed into a tabulator — reveals the myriad of safeguards against fraud built into Wisconsin’s election system. There are small differences in how election workers process ballots from one municipality to the next, but for the most part the procedures are consistent statewide.

While 59 percent of Wisconsinites who voted this year opted to cast absentee ballots before Election Day, they still had a presence of sorts at the polls.

“Your envelope acts as a person,” Helgeson explained. “Our poll workers need to physically read your name and address aloud for every single absentee ballot as if you were there.”

Helgeson said election observers, who are allowed at all polling places in the state, can oversee this part of the process, which includes checking that each envelope has the voter’s signature, a witness signature and witness address.

An election worker then numbers each envelope and tracks that in the absentee ballot log and poll book. In Greenville, workers also put a red “A” — for “absentee” — next to the voter’s information in the poll book.

If a ballot is damaged — such as the misprint in Calumet and Outagamie counties that rendered thousands of ballots unreadable by machines — it must be duplicated by hand. Two election workers, preferably one from each major party, label the damaged ballot and a new ballot with an identifying number and copy votes to the new ballot, which is then fed into a tabulator.

Once a group of envelopes is numbered, recorded and opened, they are sealed in a secure bag, by reporting unit. Election inspectors record the seal numbers on the bags.

After ballots are fed into a tabulator, they’re sealed in separate bags, and the inspector records the seal number. These records help maintain the chain of custody to ensure ballots are stored and transported securely.

After workers close the polls in Greenville, the tabulator prints the results, which are automatically sent to Outagamie County. Then, the chief inspector calls to verify that the printed results match what the county received.

This step in the process was different at Milwaukee’s Central Count, because the high-speed tabulators are not connected to the internet.

After all ballots were counted, Milwaukee Election Commission Executive Director Claire Woodall-Vogg manually transported the results, on encrypted flash drives, to the county to be imported. (The temporary misplacement of one of those drives fueled conspiracy theories of tampering.)

Finally, the ballots and envelopes are transported to the county building and retained for 22 months.

Some communities use central counting

Generally, absentee ballots are counted at a polling place. But Greenville is among 39 municipalities in which these ballots are shepherded to a centralized location called Central Count.

Milwaukee processed more than 169,000 absentee ballots at Central Count from 7 a.m. on Election Day to 4 a.m. on Nov. 4, when results were released.

Poll worker Luke Knapp sorted ballots for 19 hours. Knapp and his partner first checked each envelope to ensure it had the voter’s signature, a witness signature and address.

If either the voter’s signature or witness signature are missing, the ballot is rejected, Woodall-Vogg said. If the witness address field is missing, election workers can locate the witness in their database and fill in the address in red ink — a process being challenged by the Trump campaign.

After Knapp checked those three fields, he and his partner took the batch of envelopes to another station where two other election workers ran them through a machine that sliced them open.

Workers kept a record of the processed ballots by numbering the envelope and ballot and placing the same number next to the voter’s name in an absentee ballot log, Woodall-Vogg said.

Knapp and his partner then flattened the ballots so they would go smoothly through the tabulating machines at another station.

Because of the intense scrutiny on this election, Knapp said, “It kind of felt like being in a fishbowl.”

Kevin Kennedy was Wisconsin’s chief election official for more than 33 years. He said voter fraud “has always been very, very small. And there’s a lot of means to detect it.”

Take the registration process, for example. When a voter submits a valid form of ID with the municipal clerk or on the MyVote website, the information is logged in WisVote, a statewide voter registration system.

The system cross references with several databases, including from the Division of Motor Vehicles and Social Security to verify the voter’s identity. The system also links with the state Department of Health Services’ Office of Vital Records and the Department of Corrections databases — which flag if the voter matches someone who has died or committed a felony.

If the voter submits a ballot but dies before it is processed on Election Day, the vote can’t be counted under state law. And a person convicted of a felony who is on some type of community supervision is not yet eligible to vote.

The WisVote system is likely the “biggest deterrent for voter fraud,” Kennedy said.

Wisconsin is also part of the Electronic Registration Information Center, a collection of 30 states and the District of Columbia, which helps identify when voters have moved and registered in a new state.

“We’ve got to bring legitimacy to this election. If there was something nefarious that had happened, we need to look into it, we need to get to the bottom of it,” said committee chairman Rep. Ron Tusler, R-Harrison. “If some of these concerns are more perception than reality, then it’s really important for our committee to provide that information to folks.”

If Tusler’s committee does uncover fraud, it will be a rare find: Vote fraud is exceedingly rare in Wisconsin and elsewhere.

For example, there were 18 cases of possible fraud — out of 2.67 million votes — reported to the Elections Commission from the 2018 general election. The reports were mostly of voters who attempted to vote twice: both absentee and in person or in two municipalities. Voter fraud is a felony, carrying a fine up to $10,000 and 3 1/2 years in prison.

In addition to the safeguards built into each step of a ballot’s journey, a series of post-election checks and audits are baked into the state’s practices.

The first check comes after election workers finish processing all the ballots in their polling place or Central Count. They confirm that the number of voters marked in the poll books matches the number of ballots counted by the machine.

This ensures that no extra ballots slipped into the count and that no ballots were left out.

The Elections Commission also randomly selects at least 5% of reporting units to undergo a voting system audit in which at least two workers hand tally the results from ballots and compare them to the results from voting equipment.

McKim suggests a different method, an outcome-confirming audit, often called a risk-limiting audit, used in Colorado, Virginia and Rhode Island. McKim compared it to an exit poll in which auditors review a random assortment of ballots and take voter intent into consideration. For example, ballots in which voters circle a candidate’s name instead of filling in the adjacent bubble would count. Currently, state law does not require such audits.

Some experts say there is a much greater threat to Wisconsin’s democratic process than potential voter fraud: voter suppression. In the past decade, the Republican-run Legislature has enacted one of the strictest voter ID laws in the nation, reduced the window for early voting and made it harder for college students to vote.

Said Kennedy: “When all the legislative changes were proposed In 2011 and 2013, the mantra from the Legislature and the governor was ‘We’re making it easier to vote and harder to cheat.’ And the truth was, though, you’re making it harder to vote and it’s just as hard to cheat as it has always been.”

Two sources in this story are donors to Wisconsin Watch: Reid Magney donated $10 and Karen McKim and her husband donated $2,120.

The nonprofit Wisconsin Watch (wisconsinwatch.org) collaborates with WPR, PBS Wisconsin, other news media and the University of Wisconsin-Madison School of Journalism and Mass Communication.