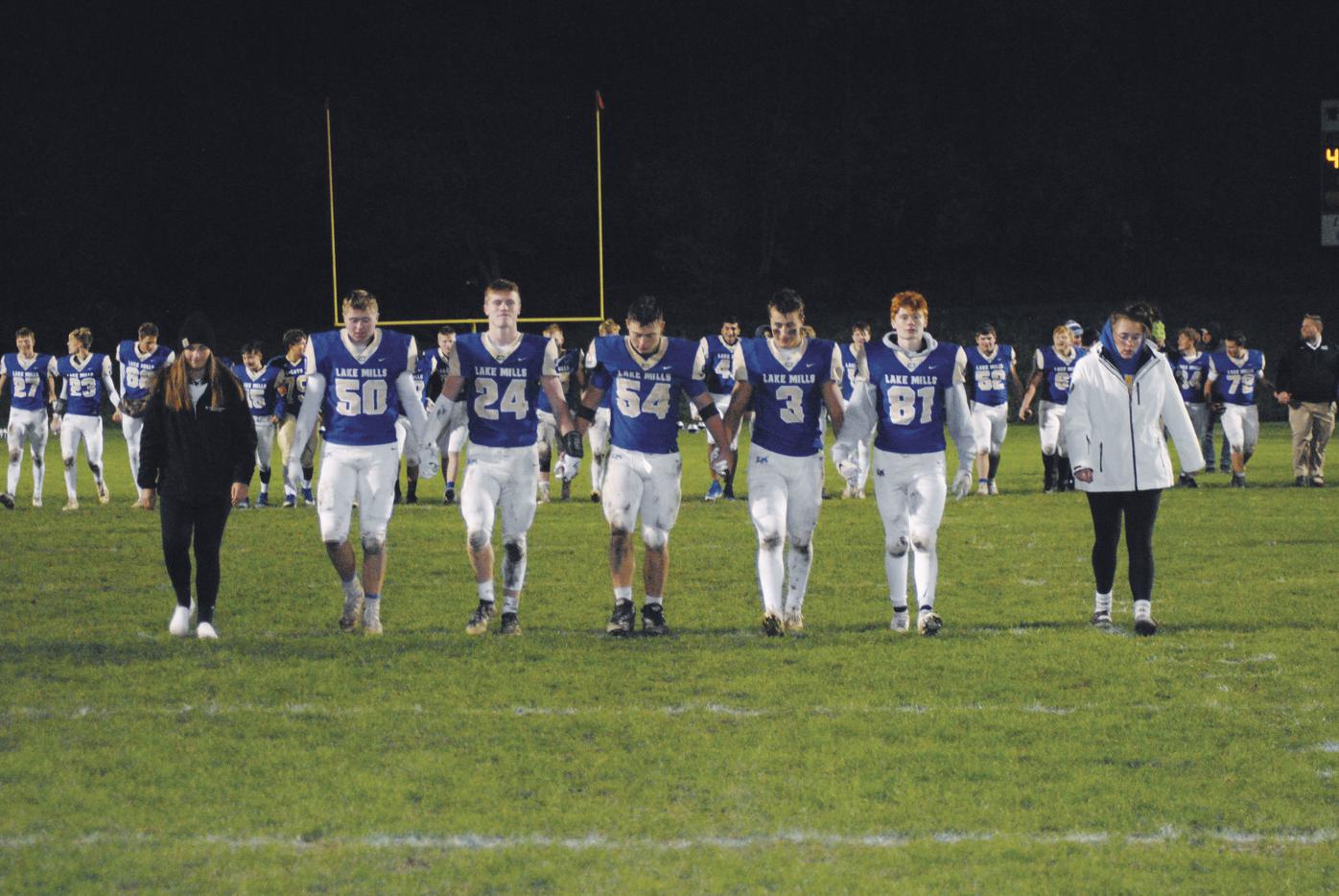 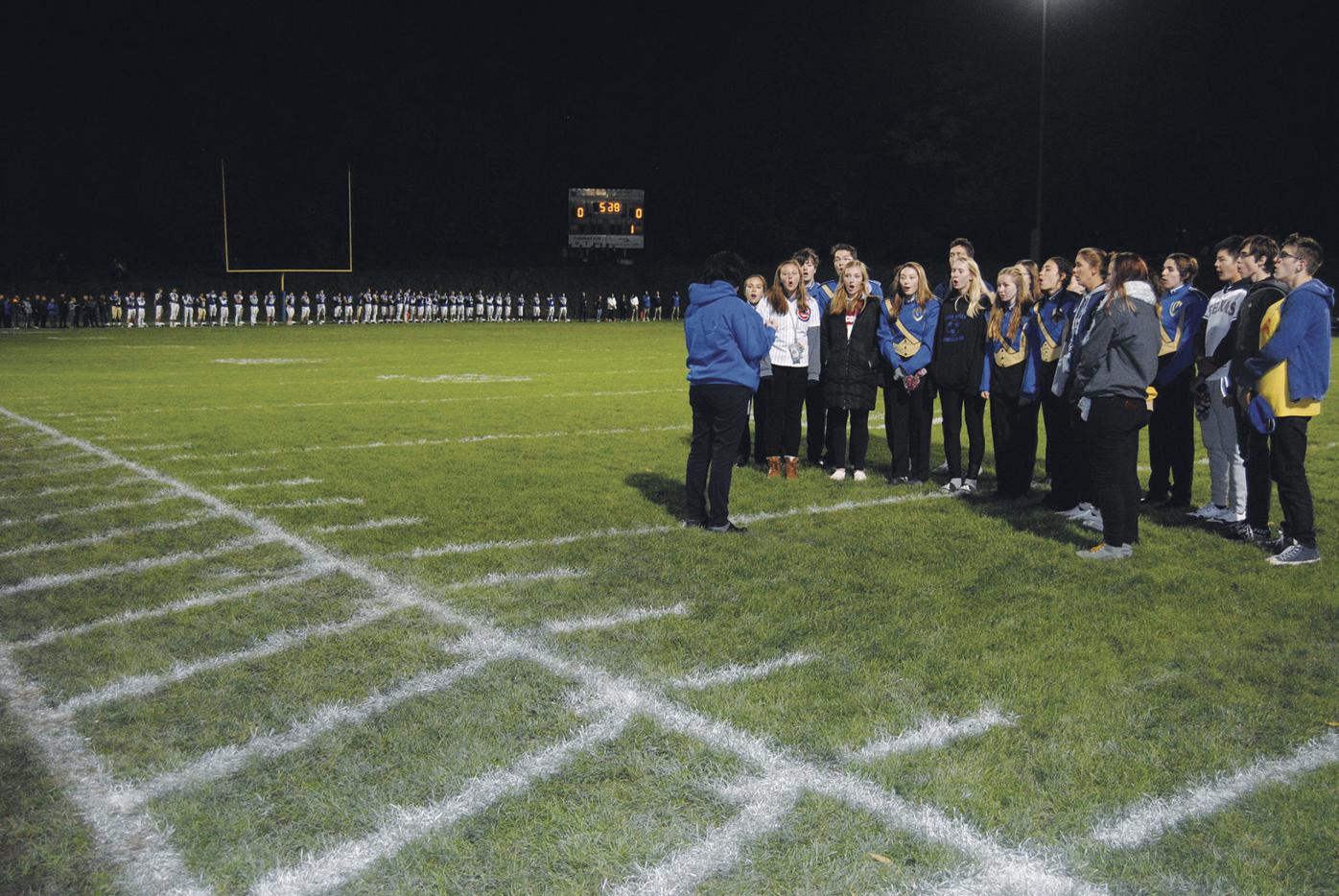 The Lake Mills High School Choir sings the National Anthem before the start of the last regular season home game at Campus Field Friday, Oct. 11 as the football team stands in the end zone. 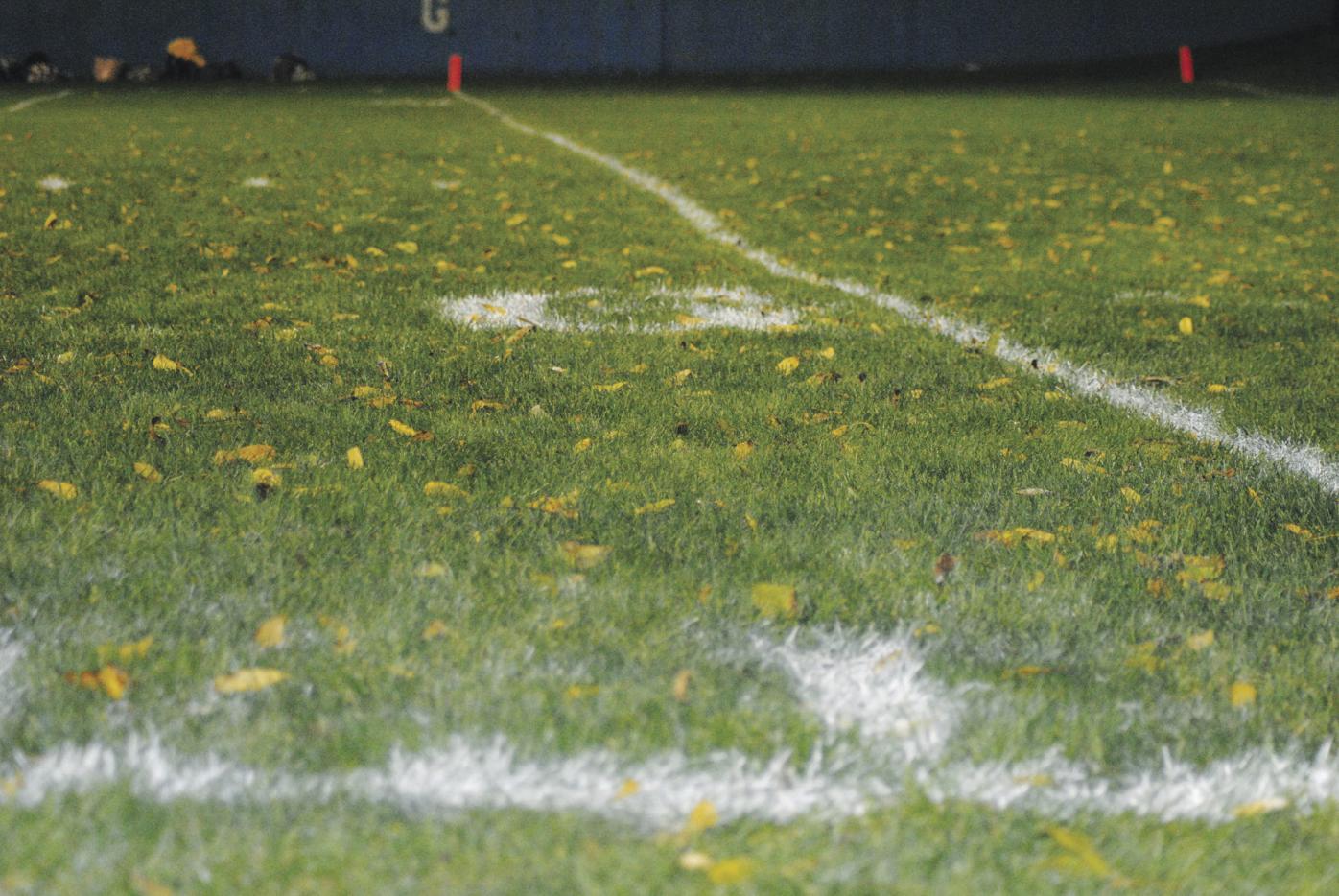 Leaves fall on the goal line at Campus Field during the last home game of the regular season at the iconic site that was once a gravel pit.

The Lake Mills High School Choir sings the National Anthem before the start of the last regular season home game at Campus Field Friday, Oct. 11 as the football team stands in the end zone.

Leaves fall on the goal line at Campus Field during the last home game of the regular season at the iconic site that was once a gravel pit.

The Lake Mills L-Cats ended their reign on Campus Field after 113 years with a win as the leaves fell during the final game of the regular season making them Conference Champions for the first time since 1988.

Despite the cold Friday, Oct. 11 there was a special feeling in the air as the community gathered to commemorate their memories at the field.

“After months of planning, we were so disappointed that the weather kept so many fans away. We needed to cancel several planned aspects of the closing program,” said District Administrator Pam Streich.

The weather kept some fans away from the game, but despite that a good crowd gathered for the pregame tailgate thrown by the Lake Mills FFA Alumni.

“Despite the cold and windy weather conditions, we were very pleased with the turnout,” said Jayne Krull of the FFA Alumni. “We served 230 people at the Farewell Campus Field Tailgate meal.”

The group had 10 volunteers from the Alumni running the event.

“We are grateful to six Lake Mills area businesses who donated some of the food items for the meal. This helped us to maximize proceeds from the event, which will go to Lake Mills FFA student scholarships or other activities,” Krull said.

The tailgate was a great addition to the pregame activities, Streich said.

“We are so grateful that the FFA Alumni provided the pregame tailgate activities. It was a huge hit with people asking us why we don’t have a tailgate more often.”

She went on to reflect about how the football team stole the show.

“The L-Cat victory over Lodi leading to the first outright winning of the conference since 1988 was actually the perfect ending to our time at Campus Field for football,” she said. “It was another reminder to me that as much as the adults try to plan an event, it is truly the students that shine! It is their time, their memories, their joy, that‘s what made the evening more memorable than anything we could have planned.”

After shaking hands with the team from Lodi the L-Cat football team slapped hands with the crowd and the seniors took their last walk across Campus Field.

Streich shared some of her memories of the field with the Leader on Monday saying she has a lifetime of memories at the field.

“My earliest memory would in watching my older siblings graduate there in the late 60s or early 70s and having no idea what was going on,” she said. “One memory that will last for a lifetime is the terrible concussion I sustained while playing high school Powder Puff Football for Homecoming. I missed a great deal of school and ended up with premature glasses.”

“I fondly remember sitting on the hill watching countless baseball games and bringing my 3-year-old to watch his older cousin Tadd play in a Little League All Star game. My son was chosen to sing, “Take Me Out to the Ballgame” over the load speaker. He felt like a star himself. In the years to come, we brought our son back to Lake Mills to be an L-Cat and play high school football on our beloved field.”

For Streich it’s an honor to be a part of closing the iconic field.

“What an incredible honor it is to be the caretaker of a piece of Lake Mills history that I enjoyed as a child. It is a bittersweet farewell to the field. The wonderful news is that Campus field isn’t going anywhere. Baseball will continue to be played there. It will be there for younger L-Cats to use in new ways as the older L-Cats move their football games to the new facility at the high school.”