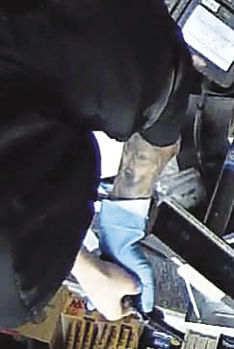 The Jefferson County Sheriff’s Office has issued a crime alert regarding an armed robbery at the Lake Mills Travel Plaza on Wednesday, July 24.

At 10:02 p.m. on July 24, deputies responded to an armed robbery at the Lake Mills Travel Plaza on State Highway 89. A male and female entered the gas station as the employee was attempting to lock the doors for closing.

The male was holding a revolver as the female accomplice went behind the counter to retrieve money from the cash register.

Deputies said the male subject was wearing a glove on his left hand and that his left arm had a large tattoo of a wolf. The male also was wearing only a partial face covering.The tattoo located on the Left Arm of the male suspect is a large wolf.

Both subjects appeared to be white.

The sheriff’s office is seeking assistance in identifying the subjects or connecting this to similar incidents.

Persons who have any information are asked to contact the Jefferson County Sheriff’s Office at (920) 674-7312.

The Wisconsin Crime Alert Network is managed by the Wisconsin Department of Justice, Division of Criminal Investigation.