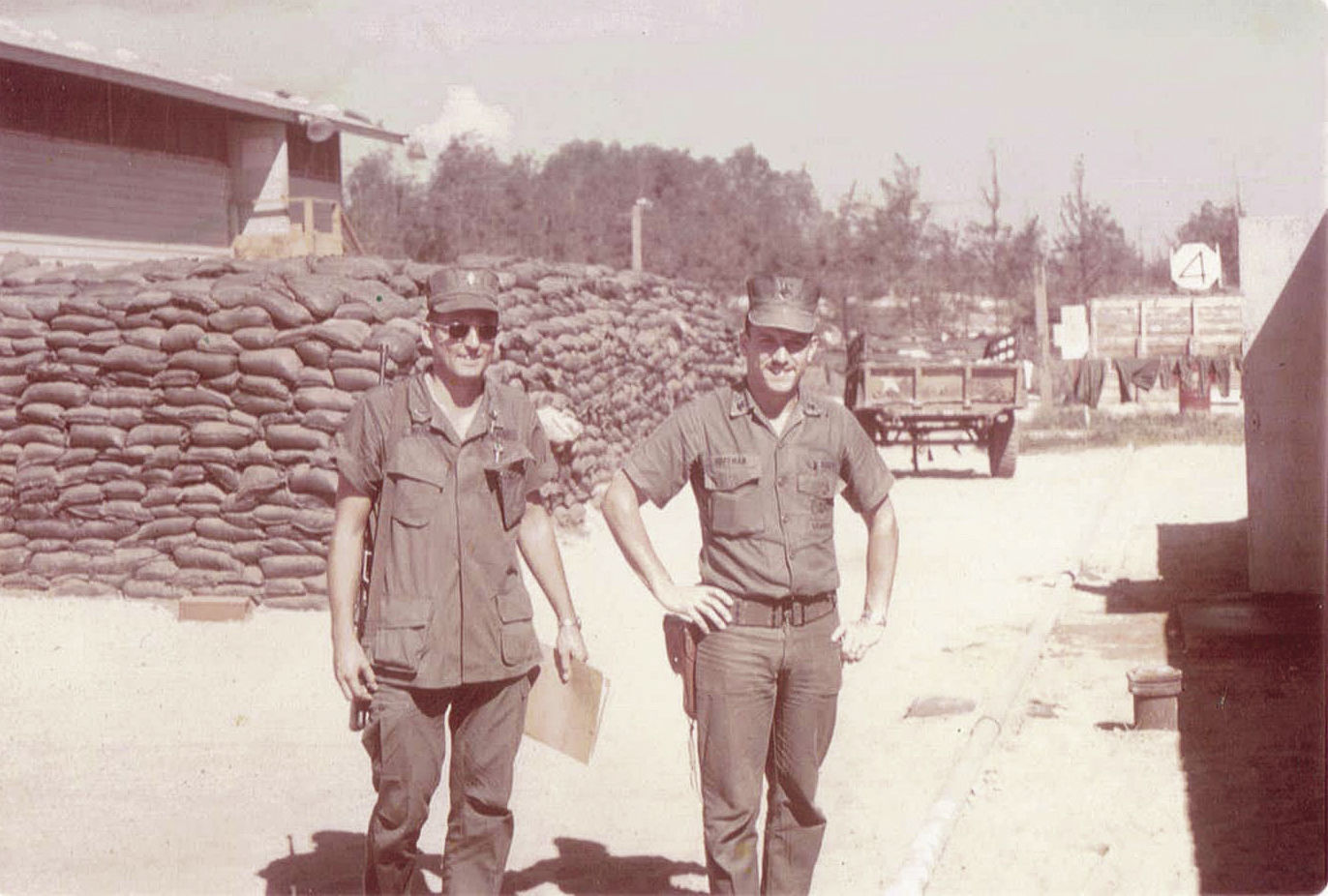 Bob Metzker and Ted Hoffman are seen while serving in Vietnam. 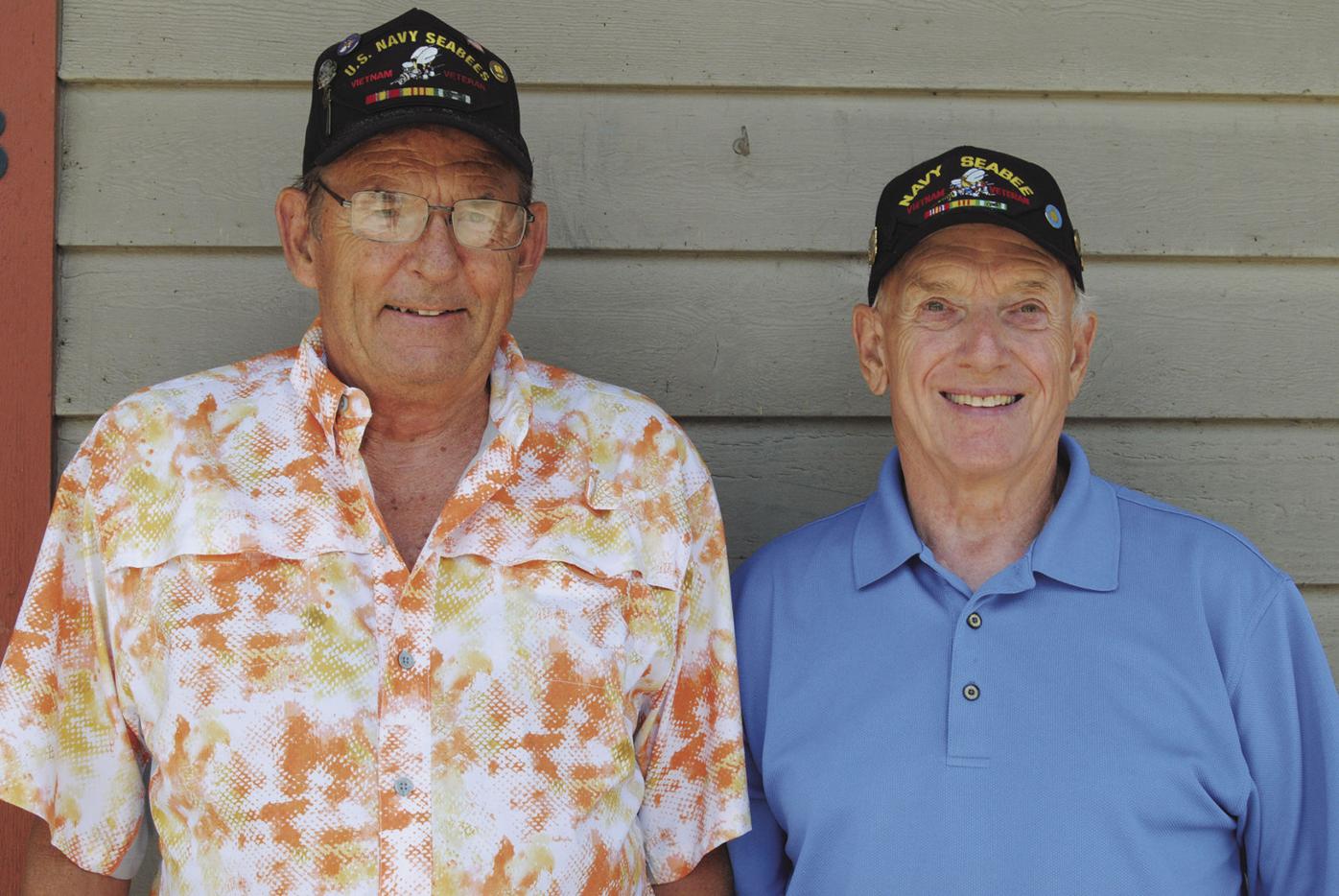 Bob Metzker and Ted Hoffman are seen while serving in Vietnam.

“Who wants to pick up a rifle and shoot people, just think about it,” asked Bob Metzker of Lake Mills.

Two local men, who didn’t know each other and met by chance, were able to avoid the draft by joining the Navy Seabees. The men met by chance and ended up in the same place over and over again throughout the course of their service.

“For me it was a no brainer after I found out about it to join as an E5,” said Ted Hoffman. “I was at a meeting one night and the Navy recruiter came in looking for someone with construction experience to join the Navy. I thought OK, I’m going to be drafted in six months, so I have to figure something else here.”

He went to Milwaukee for a physical and an interview.

“We were waiting in line for physicals and the guy next to me has the same color card as me and we got talking and it was Bob,” Ted says. “I found out he was a plumber in Lake Mills, and I was a plumber in Wausau and that was about it and we parted ways.”

Four months later Hoffman got on the plane to leave Milwaukee and there was Bob.

“We got down to Mississippi for boot camp and we were in the same company in boot camp,” Ted said.

“If we’d have planned it this way it never would have happened,” Bob commented.

When Ted signed up to avoid the draft, he was on a 120-day delay in order to finish school and get married.

“Five days after my wedding I was at boot camp,” he said.

“We missed Christmas, we were in boot camp for Christmas,” Bob commented.

“And the next Christmas we were in Vietnam,” Ted said.

They got their orders to go to San Diego to a SEAL Team base for temporary duty.

“We also had orders for Vietnam,” Ted said.

While they were in San Diego Bob was a bartender at the chief’s club, while Ted said he didn’t have much to do.

Both gentlemen went into the Navy as 2nd Class Petty Officers, E5, due to their years of plumbing experience.

They were in San Diego from January to May because they had to be in the U.S. for six months from the time they enlisted before they could ship to Vietnam.

They only had two days of combat training for their time in Vietnam.

After their six months the men took their wives home and flew to San Bernardino, California to head to Vietnam.

“We got of the 23-hour flight together and the first night there we had a rocket attack,” Ted said. “We didn’t know what was happening, we hadn’t even been there for an hour.”

“We got off the bus and I thought they had taken a wrong turn because there were white picket fences,” Bob said. “The people before us had built fences. There were paved blacktop roadways and I thought what in the world is this?”

They arrived at China Beach, Vietnam in 1969. Ted said the Seabees had been there since 1965.

The Seabees are the Navy’s construction force. Their barracks were at Camp Tien Sha.

Ted’s twin brother Tom was in Vietnam three months before Ted and Bob. He was also a member of the Seabees as an iron worker. After Ted had been there a few months they were going to send him home because they realized his brother was also there, but he was able to sign a document saying he had other brothers at home and they let him stay.

“We didn’t do much for a couple of days and then we had to go interview for a job.”

They ended up interviewing for one opening in the maintenance control division.

“The commanding officer didn’t know which one to take, we had the same training, so he said, ‘I’ll take both of you,’” Ted said.

The ended up in the same place again.

“We drove back and forth to work together,” Ted said.

Ted would go out and bid jobs that members of the Army, Navy or Marines wanted done. He worked with Korean and Vietnamese engineers and had to figure out material and labor costs.

“I don’t know if some of it ever got built or not,” Ted said.

Before he left, he was working to help move the main Naval hospital.

Bob did inspections of the facilities and wrote repair reports.

While they were there the covered storage area of refrigerators and freezers was bombed.

“The rocket attack hit the Vietnamese ammo depo next to it,” Ted said. “We had to go estimate the damage.”

There were rocket attacks nearly every night.

“They would just shoot them, but they didn’t know where they would land,” Ted said.

“I got so used to them I would sleep through them until one hit close and woke me up. I got up and there was nobody in the barracks. They were all in the bunker,” Bob said.

They both had R&R while they were in Vietnam, meeting their wives in Hawaii.

They spent a year in Vietnam and when they went home were discharged.

“It was 18 months to the day in the Navy,” Bob said. “They kicked us out after that, and we said thank you.”

“They couldn’t send us back to Vietnam for a year and they had no place else to send us because we couldn’t do work in the United States because the unions wouldn’t allow it,” Bob said.

They had a 30-month enlistment originally.

“When we got our orders to come home we were on the same plane and sat next to each other on the way home and our wives picked us up from Chicago together,” Ted said.

They stood in line together to be discharged, got their last paychecks and drove out together.

“It was the end of our career,” Ted said.

Bob’s father had a plumbing business in Lake Mills, Metzker’s Plumbing and Heating and sold to Brown’s Inc. of Jefferson, a custom home builder. Bob worked as the master plumber. He asked Ted if he wanted to move to Lake Mills to work as a plumber. Eventually Bob went into business for himself opening Bob Metzker Mechanical.

“I went to work for Bob for several years, until Bob went into business for himself and I took over his job as master plumber for the company.”

Ted eventually moved on to work for maintenance at St. Coletta in Jefferson for 20 years. He’s been living in Lake Mills since 1971.

Both couples had children for Ted it was five kids and for Bob two. They’ve stayed good friends over the years and attend Vietnam Veterans meetings together every month in Fort Atkinson.