The Hub Cafe and Pub is seen recently decorated for Halloween. The cafe was investigated by Paranormal of Wisconsin on Oct. 19. 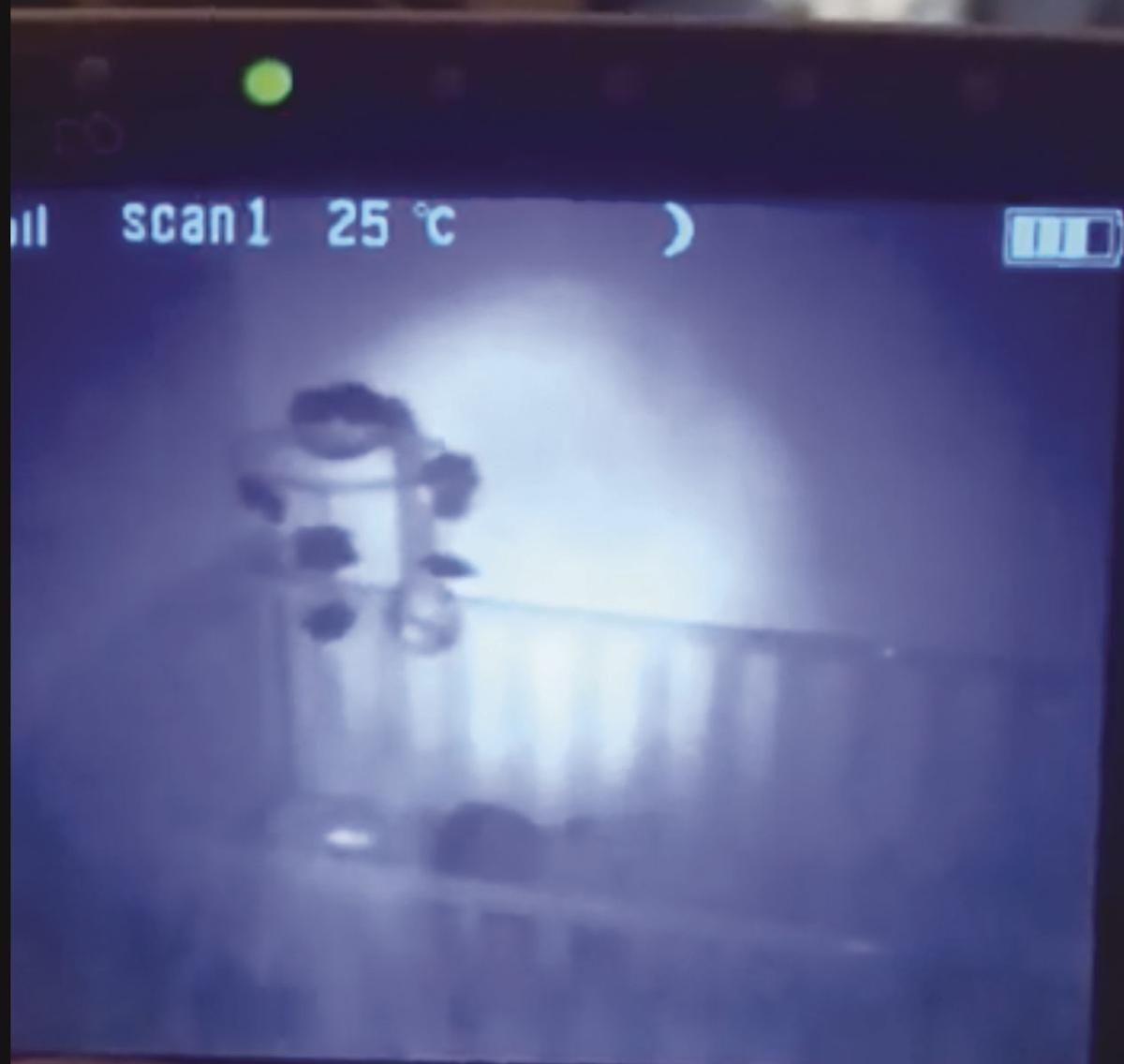 Shown is a freeze frame taken from a Paranormal of Wisconsin video on the team’s YouTube channel. Bertram recommends checking out the channel.

The Hub Cafe and Pub is seen recently decorated for Halloween. The cafe was investigated by Paranormal of Wisconsin on Oct. 19.

Shown is a freeze frame taken from a Paranormal of Wisconsin video on the team’s YouTube channel. Bertram recommends checking out the channel.

When Jason Bertram was a police officer, his duty was to investigate crimes, accidents and incidents.

Today, as the co-founder, lead investigator and case manager for Paranormal of Wisconsin, the Waunakee resident goes after ghosts, and with equipment such as infrared cameras and gadgets that detect energy, he’s encountered quite a few.

Bertram retired from the Sun Prairie Police Department in 2006 after an accident resulted in a spinal injury in 2003. He was responding to a spinout near Reiner Road on Hwy. 151, and a teenager weaving through the backed-up traffic hit the gas pedal instead of the brakes and collided with his squad car parked in the median.

Shortly after he retired, Bertram’s wife, Michelle Bertram, and friend and then fellow Sun Prairie officer, Scott Timm, encouraged him to partner with them on Paranormal of Wisconsin.

“I think they were kind of looking out for me because I was depressed,” Jason Bertram said. “I failed the [police] assessment test. I had to get six screws and three rods in my back. As a result of that I wasn’t able to perform regular duty.”

Jason Bertram was familiar with things that go bump in the night. His grandparents owned Bertram’s Tavern on Hwy. 33 just east of West Bend in the 1960s, and it was known for being haunted. His parents bought the tavern from his grandparents after his grandmother passed away at the age of 49 in 1977.

When the family remodeled the building, they found things like garlic on strings in the walls, moccasins and old books.

“There would be glasses that would break and things would be thrown across the bar,” he said.

The building had old-fashioned light switches that made a noise when they were turned off and on, and he could hear and see light through vents in the floor boards as lights were turned on in other rooms of the house.

“There’d be nights I’d be sitting there shaking and I would just have the blankets around my nose so I could breathe,” Bertram said.

Today, he and his partners travel to other people’s homes and businesses to investigate paranormal activity and coach the homeowners on how to persuade the unwelcome guests to leave.

“We caught evidence of what sounds like a grumpy man in the apartment of the business,” Bertram told the Leader. “We caught his voice on both our digital audio recorder and digital camcorder. He attempted to say several words and then yell or grunt, a rough sigh if you will.”

They also have video of a piece of their equipment being tipped over in the attic at The Hub, after it had been sitting there for several hours.

“We also have evidence of a female as well,” he said. “She was heard, what could have been her either singing or saying something with a musical tone. We heard it and have it on the recorder as well.”

Bertram said as a former police officer, he uses the same investigative techniques to find ghosts. Today he carries with him much more sensitive equipment.

The investigations begin with taking the time to establish a comfort level with the specters.

“You gain a trust, you tell them why you’re here. You gain knowledge about the investigation; you do a background on things. And that’s how you treat it. And that’s when the voices start happening,” he said. And it’s when the equipment begins to detect the presence of paranormal activity.

The first investigation with Bertram and Timm responding at a tattoo shop in Portage was the most jarring. It took them two years to solve the case and finally ended with an encounter.

“We’re down in the basement; there was an embalming room in the place. There were tunnels from the prohibition era. There’s a whole highway system of potential paranormal occurrences,” he said.

At the time, their equipment consisted of only a tape cassette and video recorder.

As he was holding the camcorder, Bertram could feel the room “get heavy,” he said. The barometric pressure got intense and he could feel an electrical charge in the air, similar to the feeling of an impending storm.

Bertram said he looked at Timm, who said, “I see it.”

Then Bertram’s police instincts kicked in. That former police training and experience is what separates his paranormal team from others, he said.

“We come in, we calm the situation down, we get an understanding. We develop a relationship with our clients, and we try to find the facts of what’s going on,” he said.

Bertram said he spoke to the apparition much as he would have as an investigating officer.

“I said, ‘You there. I want to you to stop where you are and do not move anymore.’ And it’s looking at me,” Bertram recalled. “I look at the apparition and I say, ‘I want you to leave immediately. Do not come back. The people here, this is their place, and they don’t want you any longer.’”

Timm high-fived his partner, and the apparition began to dissipate. The owner never had a problem again.

Not all investigations end so dramatically. But only one has turned up nothing paranormal, and the homeowners were actually upset that the investigators debunked their claims. Noise in a light switch turned out to be faulty wiring, and a disturbance in the bedroom was simply a tree branch brushing against the home’s exterior.

“They kept saying there was a ghost in the wall, and it kept crackling,” Bertram added.

Today, the investigators use a battery of equipment, ranging from thermal imagers, digital camcorders and other hi-tech gizmos. For the Bertrams, it’s become family hobby, with daughter Candice, 24, editing footage taken at the scenes.

The investigations follow a structure, from allowing the paranormal visitors to feel comfortable enough to make contact, the long process of reviewing all of the evidence gathered on the equipment, then revealing the findings to the owners of the premise. They then instruct the owners about how to encourage the ghosts to leave. Nine times out of 10, it works.

All of this is a hobby for them – Bertram’s partners all have other jobs – although they have begun to charge for speaking engagements. They have also been contacted by large production companies seeking to film shows.

“The problem is Hollywood is Hollywood,” Bertram. “The amount of time they wanted, it would have run the risk of everybody losing their jobs.”