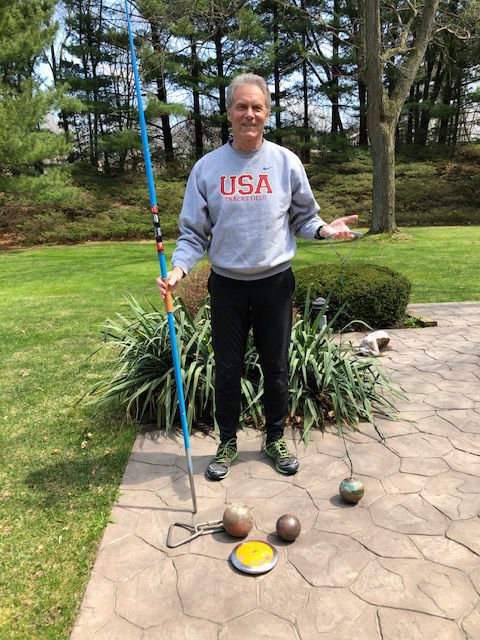 Pat Hauser is pictured above recently with the five throwing elements of the weighted pentathlon. 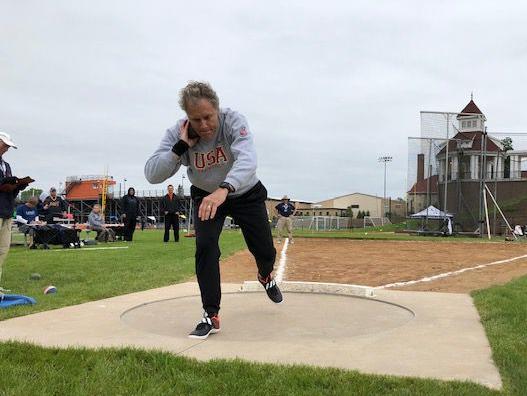 Pat Hauser competing in the shot put at the USATF State Championships at Carroll University in Waukesha. 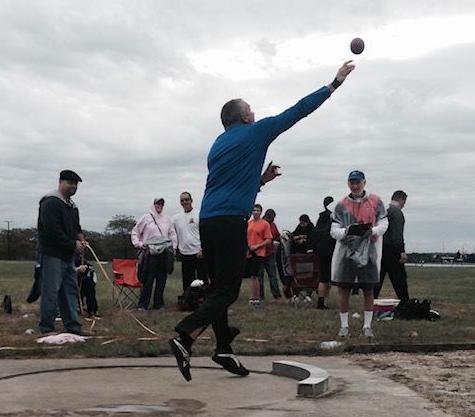 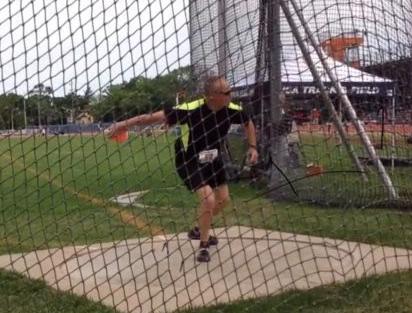 Pat Hauser competing in the discus during the USATF Midwest Regional at Carroll University in Waukesha.

Pat Hauser is pictured above recently with the five throwing elements of the weighted pentathlon.

Pat Hauser competing in the shot put at the USATF State Championships at Carroll University in Waukesha.

Pat Hauser competing in the discus during the USATF Midwest Regional at Carroll University in Waukesha.

Many in the Lake Mills community know Pat Hauser from his tenure as a physical education teacher in the district, serving as a head coach for three varsity sports.

In retirement, Hauser, 68, has taken up a new challenge, competing in USA Track & Field (USATF) competitions in the weighted pentathlon. The pentathlon consists of throwing the discus, shot put, javelin, hammer and weight.

Hauser, who competes in the 65-69 year-old age bracket, is ranked fifth nationally in both the weighted pentathlon and the discus. He is 13th-ranked worldwide out of 696 competitors in the discus.

Hauser’s initial plan was to compete in running events before making the pivot to throws.

“When I retired my goal was to compete in the Senior Olympics in track and field,” Hauser said. “Discovered when I started I couldn’t run real well anymore so I tried throwing. I thought I could throw the javelin since a lot of guys my age having played baseball feel like they have a good arm. The javelin is hard on the arm.

“I had never thrown the discus competitively but did coach it for 10 years back in the ‘80s. I threw it fairly well and I threw it for two years. (At competitions), I sat around for two hours, did my six throws and we’d go home.”

Hauser then bought his own equipment and made the leap to the weighted pentathlon, which is scored by points for each event. He’s spent the last six years competing in this event and individually in the discus.

“In the masters competition there is a lot of comradery and relationships,” Hauser said. “I’ve competed in 10 or 11 states from the Midwest over to the East Coast. You get to know a lot of good, nice people. It’s kind of fun when you get together at these meets. That’s probably one of the best things at the meet is meeting a lot of great people.”

His training regimen, aside from throwing practice, involves kettlebell work and mobility exercises.

“I do a lot of kettlebell exercises and leg work with the kettlebell and bodyweight work,” Hauser said. “A lot of mobility work also. There are some very strong people in our events, we don’t throw the same weight as the men do on the Olympic level. At age 70, everything besides the discus gets smaller.”

While cooped up inside during winter months, Hauser still practices throwing.

“The thing I find with it is that it’s really fun,” he said. “What kid doesn’t want to throw stuff? Most days I go out and throw something. In the winter I have a tarp in my basement I throw against. The training is a lot of trying to stay loose and mobile.”

This season was scheduled to be a qualifying year for the Senior Olympics. The COVID-19 pandemic halted the early competition calendar stretching through mid June. Next month, USATF organizers will determine whether the national competition slated for Greensboro in July will go on. If the entire year is canceled, there will be a different plan for Olympic qualifying, Hauser said.

Track and field seems to be in Hauser’s blood. He coached it at LMHS in some capacity for 36 years, including as an assistant on the 1980 state-championship winning team and as the head coach for the state title team in 1986. He also was the girls basketball coach for 19 seasons and the boys’ coach for 14 seasons.