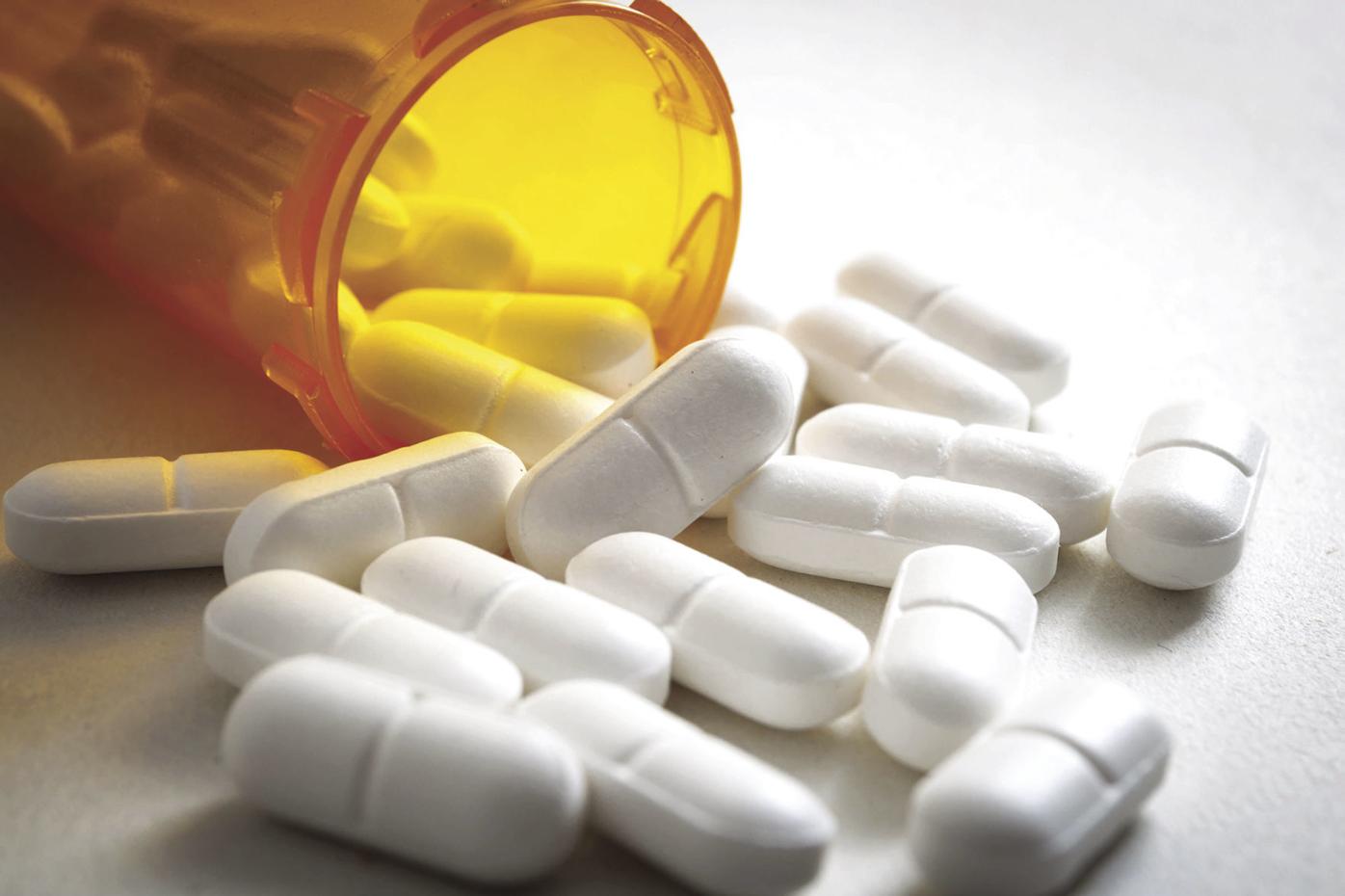 According to data compiled by the DEA and reported by the Washington Post, from 2006-12, nationally 76 billion pills flooded the market during those seven years. Of those 76 million, 15.7 million came to Jefferson County through trips to the doctor or dentist office. For the approximately 85,000 residents in Jefferson County, that’s about 185 pills per person over the seven years. 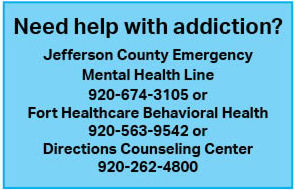 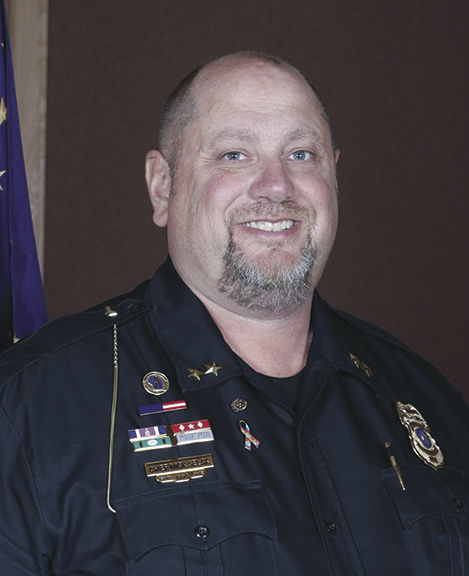 According to data compiled by the DEA and reported by the Washington Post, from 2006-12, nationally 76 billion pills flooded the market during those seven years. Of those 76 million, 15.7 million came to Jefferson County through trips to the doctor or dentist office. For the approximately 85,000 residents in Jefferson County, that’s about 185 pills per person over the seven years.

They could be your neighbor, friend, son or daughter. It could be you. Addiction happens in Lake Mills.

There have been five overdose deaths in Lake Mills in recent years. Five lives cut short. Children left without a parent and families broken.

“Having to deliver that message to their parents or siblings is heartbreaking,” said Lake Mills Police Chief Mick Selck. “Regardless of any faults that person may have had or some bad decisions, they are loved.”

The opioid crisis has been raging in the country since the mid-2000s and Lake Mills is not immune to the statistics. According to data compiled by the DEA and reported by the Washington Post, from 2006-12, nationally 76 billion pills flooded the market during those seven years. Of those 76 million, 15.7 million came to Jefferson County through trips to the doctor or dentist office. For the approximately 85,000 residents in Jefferson County, that’s about 185 pills per person over the seven years.

Believe it or not, even though Watertown and Fort Atkinson are both more than double the size of Lake Mills, it was this community that was hit the hardest by painkillers per capita. In Lake Mills 318 pills per person were prescribed over those seven years data was collected.

“People think this is a big city problem and that it’s not happening here and in their mind project what a heroin user looks like and acts like or is,” Selck said. “They might be working with them or their friends might be struggling with this at home because it doesn’t necessarily follow socio-economic lines like people think.”

From January 2015 to June 2019, 10.3 million doses of hydrocodone and oxycodone were distributed to Jefferson County residents or about 121 pills per person over four years, a decline from the 2006-12 numbers.

These numbers only present one picture of the opioid crisis, which in recent years has switched from prescriptions to heroin in part due to efforts by healthcare organizations, doctors and pharmacies making opioids harder to obtain.

“There are people that are dying from it and they create chaos in their own families lives as well as their community,” Selck said. “They are a person who can’t maintain a job, but needs to money to maintain a habit, so they are either using family and friends to get their fix or they are resorting to crime.”

These types of issues usually see the involvement of law enforcement, which doesn’t always have to mean a one-way ticket to jail for addicts.

Selck hopes family members will intervene sooner to try to get people help.

“These are people in our community who are hurting, and they don’t always understand how they are doing that. When they are in the midst of it they are very self-centered, and they are only thinking about the next fix.”

Selck said law enforcement can be the gatekeeper to help introduce someone to treatment.

“For most of these people there is a good person inside the addiction waiting to get out. They just need to find the right avenue. They need the right push.”

During the course of regular police work law enforcement finds people, usually through criminal activity, who need help with their addiction.

“Through the enforcement and through the court system we are hopeful their addiction issues are recognized and addressed so they can get help and they become a valued member of our community, instead of a burden on society through lost resources.”

The five people who have died from Lake Mills due to the heroin epidemic will be forever missed.

“Those are some real impacts that are going to be life changing for their family members and if we can help to avoid or decrease these deaths, that is a huge focus of our job.”

Jefferson County Law Enforcement signed a Memorandum of Understanding in 2016, saying addicts who want treatment can come into the police department and turn in any drugs or paraphernalia, without fear of being arrested to get help

“We can make phone calls and try to line up some help.”

Police also have the ability to help addicts when they are in the process of being arrested if they want help.

“Nobody ever turned themselves in to get help, but those who are getting arrested always want help,” Selck said. “It is a rock bottom point and they realize there are implications for their actions.”

One of those ways law enforcement helps is through Jefferson County’s Drug Court.

“There is a lot of expense that goes into monitoring the people in this situation,” which he said not everyone agrees with. “If you don’t spend the money here making them productive you will spend it with law enforcement court and prison. Where is the best value, having them incarcerated or having them working?”

For Selck the mission to end deaths due to addiction is personal. He knew several of the Lake Mills community members who died due to heroin overdoses.

“When I would see this person out in the community his smile would light up the room. I truly liked him, and I know there were many people who felt the same way and it had quite the impact when he passed away.”

He doesn’t know the backstory of every addict the police department has dealt with, but every death has an impact.

“There is a wake of devastation when someone dies.”

It’s also important to note those who aid someone in an overdose situation are immune from prosecution in Wisconsin if indeed they too are on drugs.

Helping people is the focus of the Lake Mills Police Department. Selck says they will do everything they can to point people in the direction of help if they are willing to take it. Selck has drove people to recovery himself.

Lake Mills has had a long history of drug prevention efforts going back to DARE and GREAT programs starting in the 1980s.

“They were teaching kids how to say no to drugs and avoid peer pressure situations that leads to them experimenting and trying it.”

DARE and GREAT programs start at the middle school level, where many kids have already been exposed to some type of drug through parents or older siblings. The department has also taken in thousands of pounds of drugs through its drug take back program, reducing the availability of unused prescriptions falling in to the wrong hands.

Lake Mills was one of the first police departments to carry Narcan in the squad cars, which hasn’t always been a popular stance on saving people who are going through an overdose.

In Lake Mills officers don’t use Narcan too often, but there was an instance in the past year where they had to use Narcan on the same individual twice in one day.

“Last summer there was an instance where we used it two or three times in a month and then you will go a month or two without using it.”

The latest concern in Lake Mills in the uptick in methamphetamine arrests.

“In the last two to three months we’ve had five arrests for meth.” Selck said. “A couple of them were dealer level and before that we probably haven’t had five meth arrests in the last five years. We have information about a lot more of it going on.”

Meth is a very different drug from heroin, it keeps people awake for many hours or days and then they crash and sleep for days.

“They become irrational and paranoid and if that’s someone who is living in your house as a parent that can be very chaotic.”

Many of the people Lake Mills Police have come in contact with have been driving under the influence of meth.

“Most of the meth we’ve recovered has been through traffic stops.”

“For too long there have been too many people who have sat back and done nothing,” Selck said. “Maybe they’ve watched somebody die or watched them spiral. If you care about these people help them if you can.”