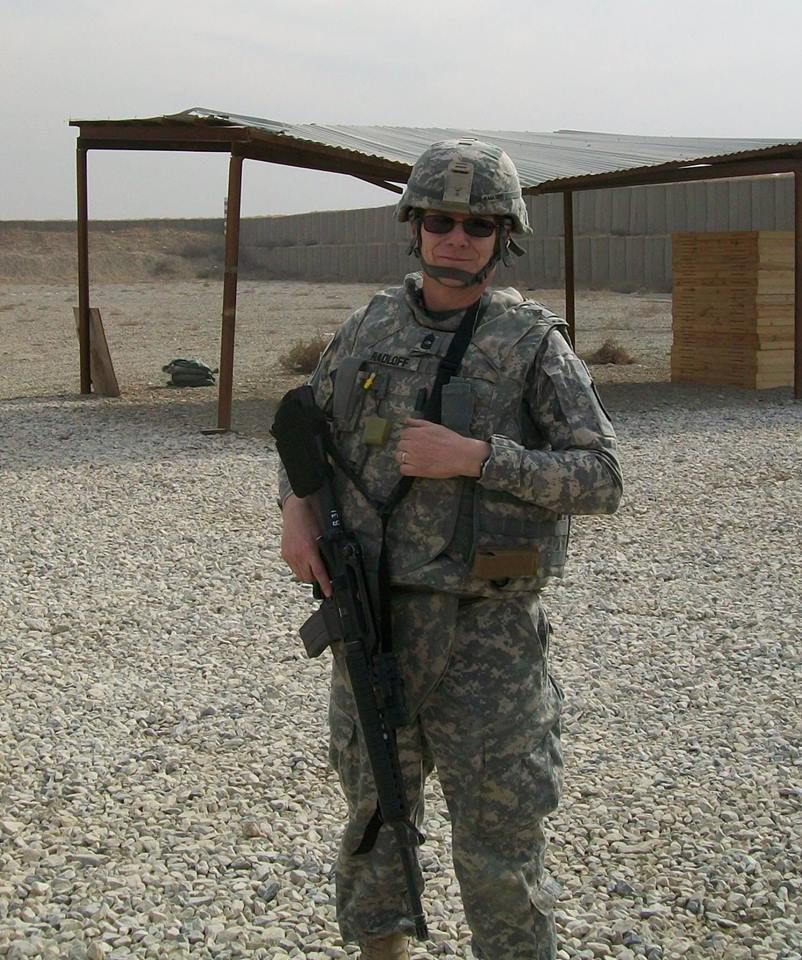 Master Sergeant Terry Radloff (retired) is seen in uniform in Afghanistan during his deployment. 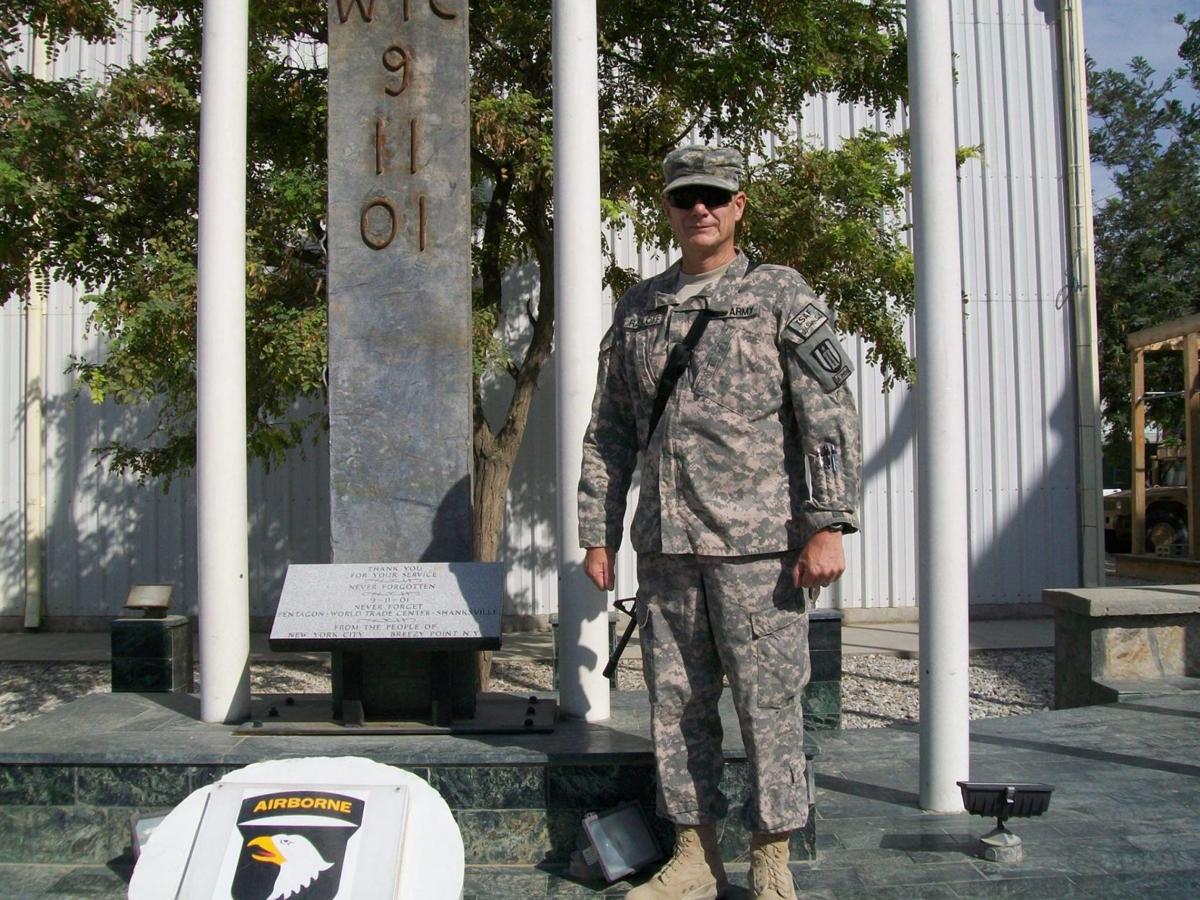 Terry Radloff is seen at a 9/11 memorial. The events of Sept. 11, 2001 inspired Radloff to rejoin the Army Reserves after retiring. 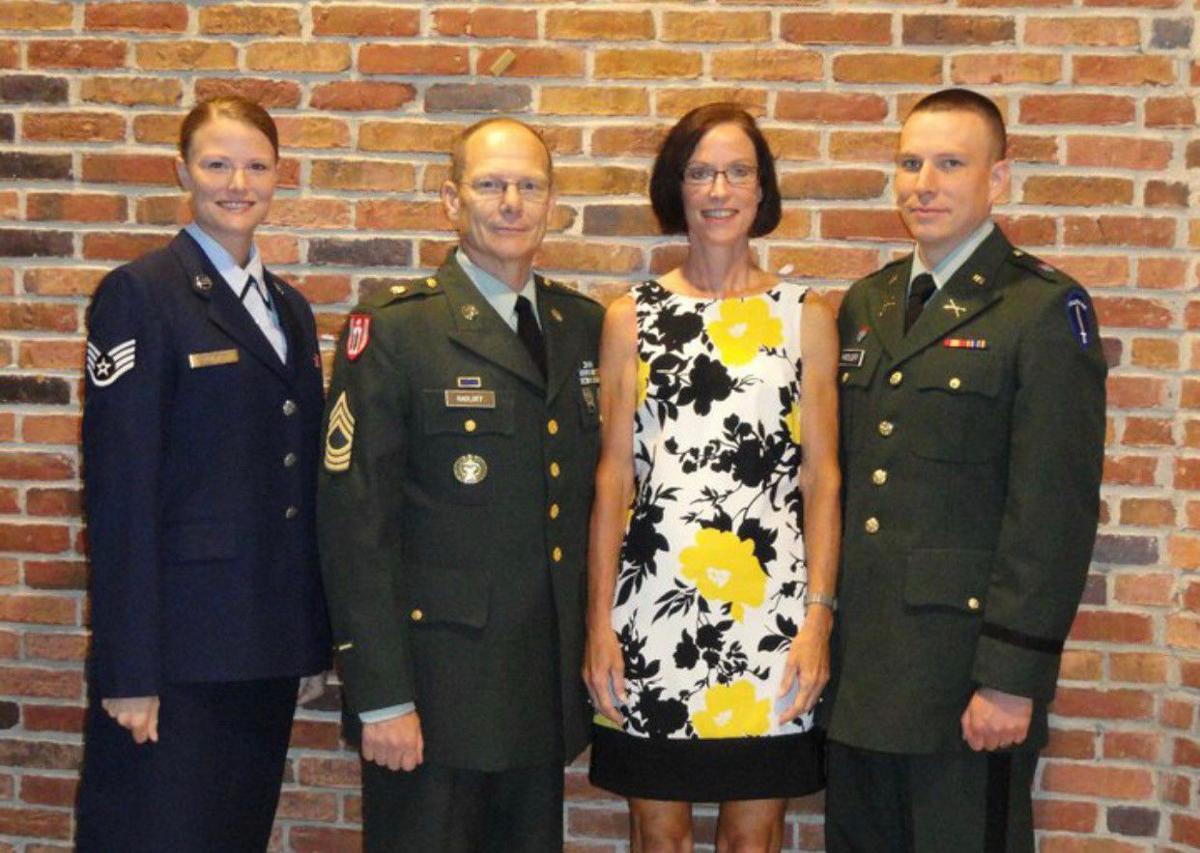 Terry Radloff is seen with his wife Debra and children Elizabeth and Ryan. The family was at one time a three-star family.

Master Sergeant Terry Radloff (retired) is seen in uniform in Afghanistan during his deployment.

Terry Radloff is seen at a 9/11 memorial. The events of Sept. 11, 2001 inspired Radloff to rejoin the Army Reserves after retiring.

Terry Radloff is seen with his wife Debra and children Elizabeth and Ryan. The family was at one time a three-star family.

For him it was an honor to serve. Terry Radloff, a 1977 Lake Mills High School graduate, who lives in Deerfield is a retired Army Reserve Master Sergeant.

“I always wanted to do something like that,” he said of his 33 years in the Reserves.

He enlisted in December 1978 and retired for the first time in 2000. After September 11 happened he reenlisted. He says his dad was also in the military, which inspired him to be involved.

“I grew up watching Vietnam on TV. I just got an interest in it as a kid.”

He went to Fort Knox, Kentucky for training and then to Madison, where he drilled for about 20 years.

“I was slotted into a drill sergeant position and I did that for 18 years.”

“I kind of fell into it,” he said of becoming a drill sergeant. “When I enlisted I was supposed to go to a different unit Jan. 5 and I woke up on Jan. 1 with measles.”

He couldn’t go, so by the time he was better he had to choose a different position.

“My first drill in Madison I remember walking into the drill hall and it was wall to wall drill sergeants. I kind of panicked a little,” he said with a laugh.

It was harder than one would think to get back into the military after he retired in 2001. It turned out he was on active reserve so then he was able to join back up. He went to the ROTC group in Madison.

“I interviewed and was hired by them. I worked in Whitewater for several years and then Maranatha doing their ROTC programs.”

He taught leadership and land navigation as a part of the ROTC program. Radloff has also had the opportunity to teach at West Point during their intercession program.

Radloff did a lot of training during his time in the reserves, but the most memorable year was the one spent in Afghanistan.

“In 2009-10 I volunteered to go over there, and I went with the 372nd Engineering Brigade out of Minneapolis. They had an opening and a friend of mine said they were looking for an E8, which I was.”

He didn’t want to go without his wife Debra’s blessing.

“She was OK with it, but it was a rough time for her.”

While Radloff was in Afghanistan he helped to coordinate route clearance packages or small convoys of vehicles with special purposes such as mine rollers and ground penetrating radar.

“They would go out and sweep the roads in our sector, the eastern half of Afghanistan, and look for IED’s. I coordinated their routes and made sure they had personnel and operational vehicles and everything they needed to do their missions.”

He heard briefs every night from multiple different military partners from other countries during his time there including after action reports about different actions that occurred.

“I went on a few missions myself. The longest one we went on we took a convoy with a bunch of French soldiers to a base up in the mountains,” he said.

“A lot of it was not knowing,” he said of the experience. “There were a lot of times you would lay awake all-night waiting.”

Radloff was on Bagram Air Base.

“We had rockets and mortar rounds that would come in. The base was a big target.”

Some nights the rockets would get close to where Radloff was staying.

“The first half that I was there we worked with the 82nd and then the 101st. They were the battle space owners and we supported all the engineering operations they had.”

“We went to a couple of villages and when we were training at Fort McCoy for pre-mobilization training they had these mock ups of these little villages and one of them was pretty dead on to what we saw.”

He remembers seeing people butchering a goat that was strung out all over.

“We went through there on the way back and there are one or two light bulbs in the whole town. It was like going through the stone age, some of the towns.”

His unit helped out with construction projects and helped to train the Afghan Nationals on carpentry techniques.

“Everything is just so backwards there.”

Radloff learned to never take his training for granted while he was in Afghanistan.

“My first time outside the wire we had to go to a road that had just been blacktopped by the French and there were reports they (insurgents) were putting IED’s in the road, the French paved over them and then the insurgents would go back and connect the wires and blow up the road.”

They also had to watch out for blue barrels filled with explosives in the culverts.

“We came across one of those culverts and I had to go with a team to check out the culvert and my knees were shaking.”

Thankfully they didn’t find any explosives in the culvert.

During his time in country suicide bombers infiltrated Bagram.

“They picked a bad spot to do that it was near the special forces section,” he said. “They found out they had soldier’s uniforms from the laundry.”

The laundry was all done by locals as were other services on the base.

Radloff has been a quality engineer for many years. He currently works at Generac and before that has worked for different companies including Hamlin for 17.5 years.

“They were a big supporter,” he said of his service. “When I got back in my supervisor said ‘Yeah, go for it.’ The whole time I was at Hamlin and in the Reserves, they were 100 percent supportive.”

He met his wife, the former Debra Wendt, in high school.

“We were high school sweethearts. I met her my sophomore year.”

They’ve been married 39 years and have two adult children Elizabeth and Ryan, who were both also in the military.

Elizabeth was in the Air Force with the 115th Fighter Wing in Madison and Ryan was a First Lieutenant with the 101st Airborne Division. His father was in the 82nd Airborne.

“He was one of those guys who jumped out of a perfectly good aircraft and so was my son.”

His father was in the military in 1955-59 in-between actions.

Growing up he says he didn’t encourage his children to join the military. He says he, and his wife wanted it to be their decision.

It worked out that Radloff was able to be in country during leave from his deployment to give his son his first salute when he graduated.

“I thought that was kind of neat.”

“We had a period of time where all three of us were in the military known as a three-star family.”

Both of his children were able to pay for their education with their military benefits. His daughter now lives in Stoughton and his son is in La Crosse.

Radloff retired from the Army Reserve 2011.

“I would do it again,” he said of the deployment. “Sometimes you get anxious. I still hate crowds. We had an incident where we were at a bazaar and we found out there were suicide bombers infiltrating within the bazar.”

He says he can understand why veterans can come back from war with PTSD and other issues.

“There are just things you are not used to seeing and nothing can prepare you for a lot of the stuff we saw.”

He said the first day he was there two little girls followed some goats out into a field that happened to have mines in it and they were killed.

“Their (Taliban) disregard for human life and the way they did things was the irritating part.”

He learned to not take life for granted from the experience.

“Enjoy the times you have with people because life is short. The last day of the month they would show all the individuals on the screen who died. For me the hard part was all the young kids who would show up on there. What a waste.”