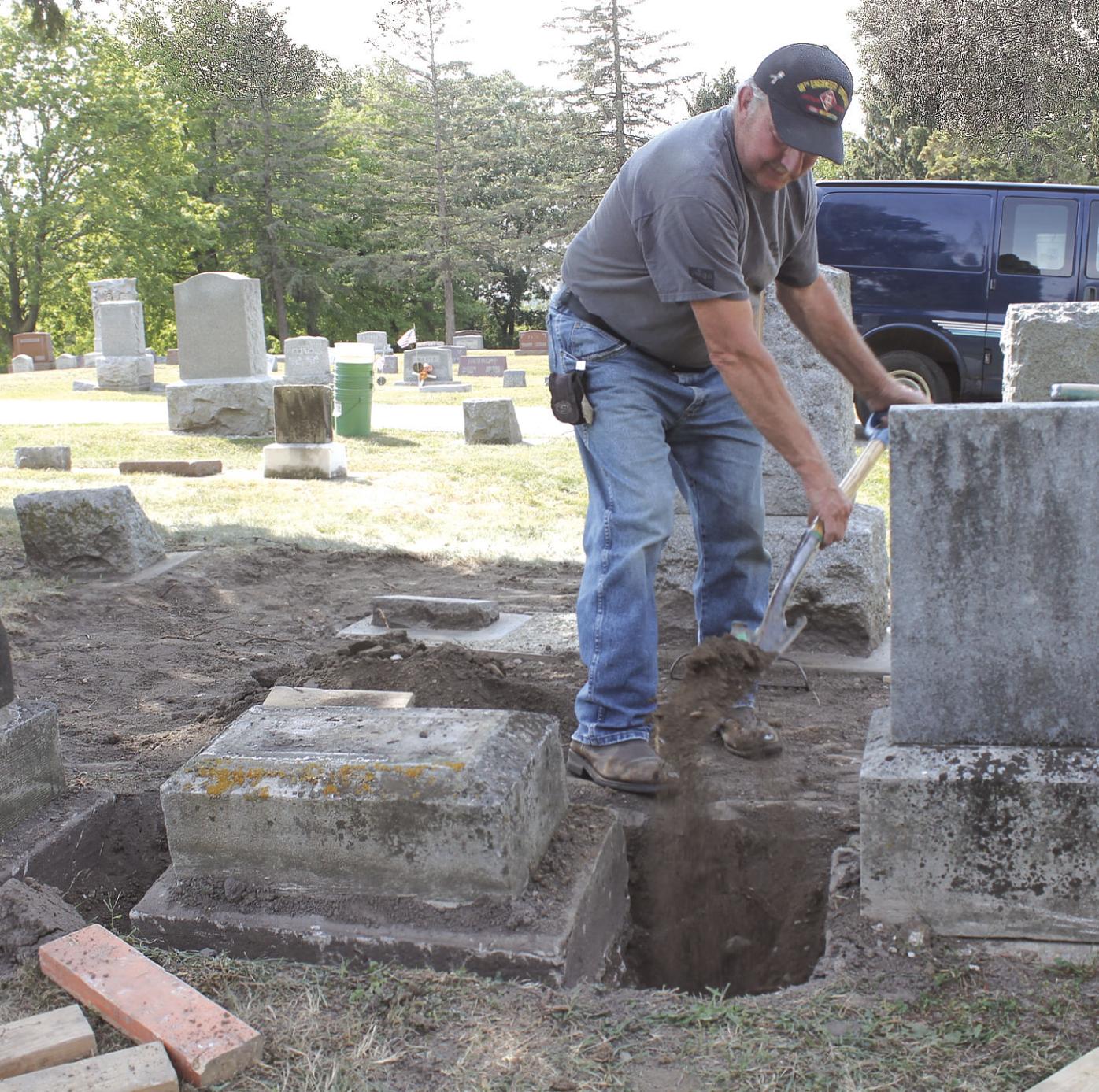 Gene Burrow, the sexton for St. Paul’s Lutheran Cemetery, digs up the dirt around the bottom portion of a headstone. This is just the first part of the process in raising gravestones that have been sinking into the ground. Last year, Burrow raised or straightened 23 headstones; he has already reached that amount this year and plans to do a few more before the weather turns. 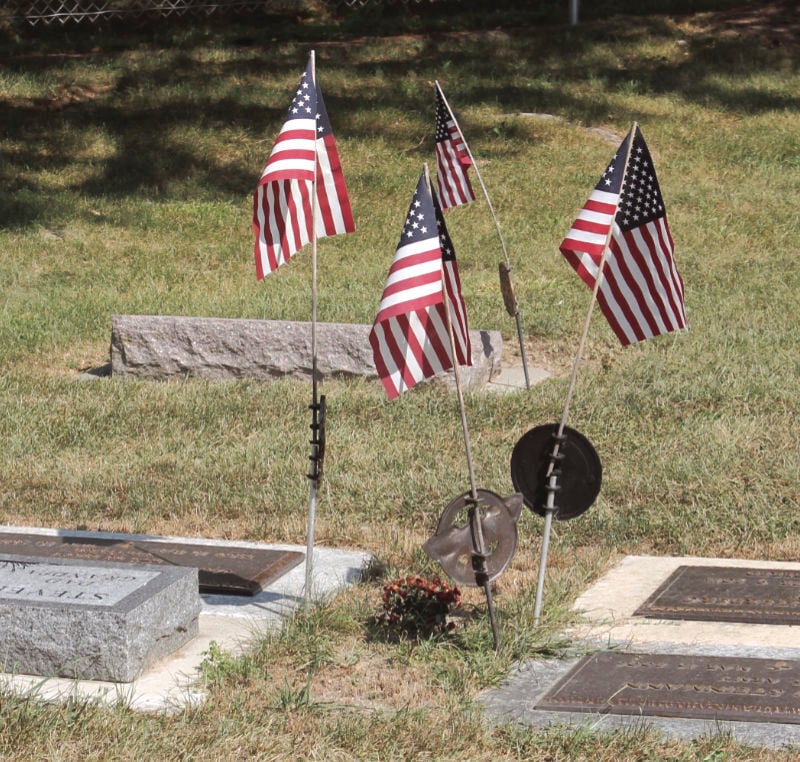 As a way to honor veterans buried in the Lutheran cemetery, Gene Burrow places flags at each of the grave sites of those who served in the military. He puts the flags up a few days after Memorial Day and leaves them in place until Nov. 1.

A collection of yard tools leans against the tree and nearby headstones as Gene Burrow uses a shovel to remove the dirt from around the footing of a gravestone.

“It’s really down there,” he said on a pleasant Thursday afternoon. “It shouldn’t take much more to get it dug up.”

There’s a growing mound of dirt at the end of the burial site from the project.

Once enough earth has been removed from around the footing, the 74-year-old will use a prybar to raise the entire headstone. Burrow will then block the space off with 2x4s and continue adding pieces of wood until the stone is at the appropriate level. The empty space under the marker is then filled with road gravel to prevent any future sinking.

It’s a physical task and one he had to work out on his own.

“Lots of trying to figure out what would be the best way to do this,” Burrow said “No one gave me any directions on how to do it. It’s mainly about raising it up to the right level.”

On a nearby headstone that was recently raised, the bottom few inches show the remnants of dirt. The color shifts from darker to lighter indicating how far the base of the stone had sunk underground.

Since Oct. 29, 2015, the retired plumber has been the sexton of the Lutheran cemetery, located on Highway A just north of the city. He was appointed to the cemetery board in 2014 and started mowing the property in 2016.

No one requested Burrow remedy the sinking headstones; it was just something he felt was appropriate.

Additionally, having the grave markers in an upright position and above ground makes mowing in the cemetery much easier.

The site he was working on Thursday was headstone number 23 this year; in 2020 he brought the same number of grave markers up to ground level or remedied stones that had been tilting.

Many of the sites Burrow has been fixing are in the older part of the St. Paul’s cemetery, which was founded in 1899, and is now a total of 1.69 acres. There are 829 single lots in the graveyard, the majority of them already sold, he said. Last year, the cemetery association added a columbarium.

Getting the older grave markers above ground is just one of the things Burrow has done as the sexton.

He noticed that each year, the local American Legion post would place small flags on the graves of the many veterans buried in St. Paul’s cemetery for Memorial Day. A few days later, the patriotic symbols of the United States were removed.

Burrow, who is also a veteran, felt those who had been in the service should be honored for more than a few days. He decided in 2015 to purchase his own small flags and soon after the Legion removed the flags they posted at gravesites, Burrow would put in an American flag as a way to remember the veterans who are buried at the Lutheran cemetery.

The sexton removes the flags by Nov. 1 and replaces the ones that become worn.

“I just use my own money for this,” Burrow said.

As he walks through the cemetery, Burrow points to the headstones he will need to raise next year. One of the markers is flush with the ground.

“That’s what happens to the old stones,” he said. “Then I can’t see them when I’m mowing.”

Burrow notes how families are buried near one another, explaining the older plots will have one larger headstone for parents and smaller ones for their children. Some of the stones are engraved with names that can still be found among the residents of Lake Mills.

“You’ve got some second and third generations still living around here,” he said.

A few people have stopped to ask Burrow what he’s been doing at the Lutheran burial grounds, expressing a bit of interest in how the sexton is ensuring the stones don’t get swallowed into the dirt.

He’s been documenting the work he’s conducted from raising the headstones to building a new shed and installing new fence. Burrow also created a makeshift retention wall out of field stone around the cemetery to prevent further erosion on the property’s west side.

“I don’t mind doing it,” the sexton said. “It’s almost become my hobby.”