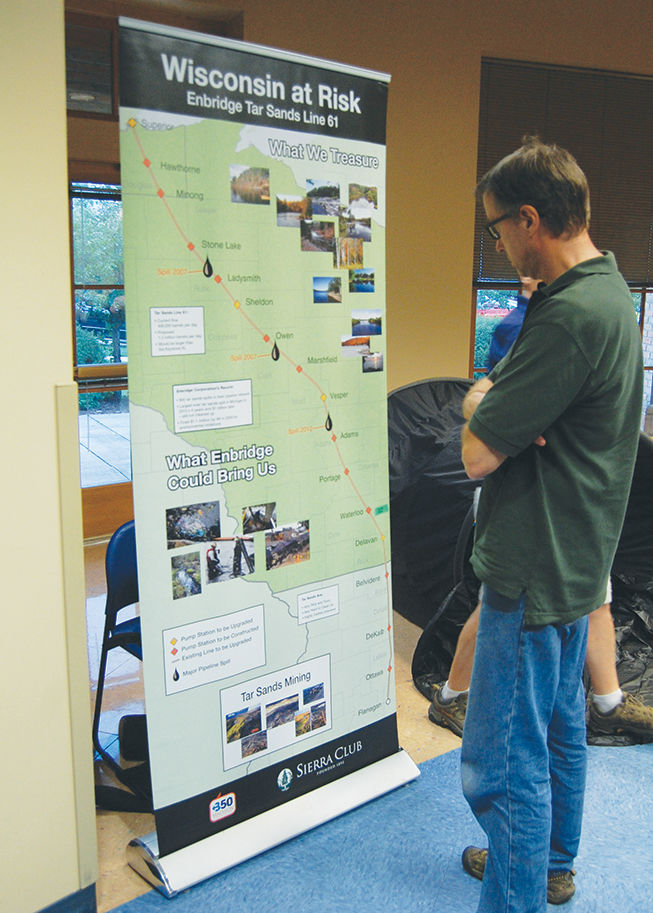 An attendee at July 14’s pipeline forum checks out a map showing where the Enbridge pipelines are in Wisconsin. 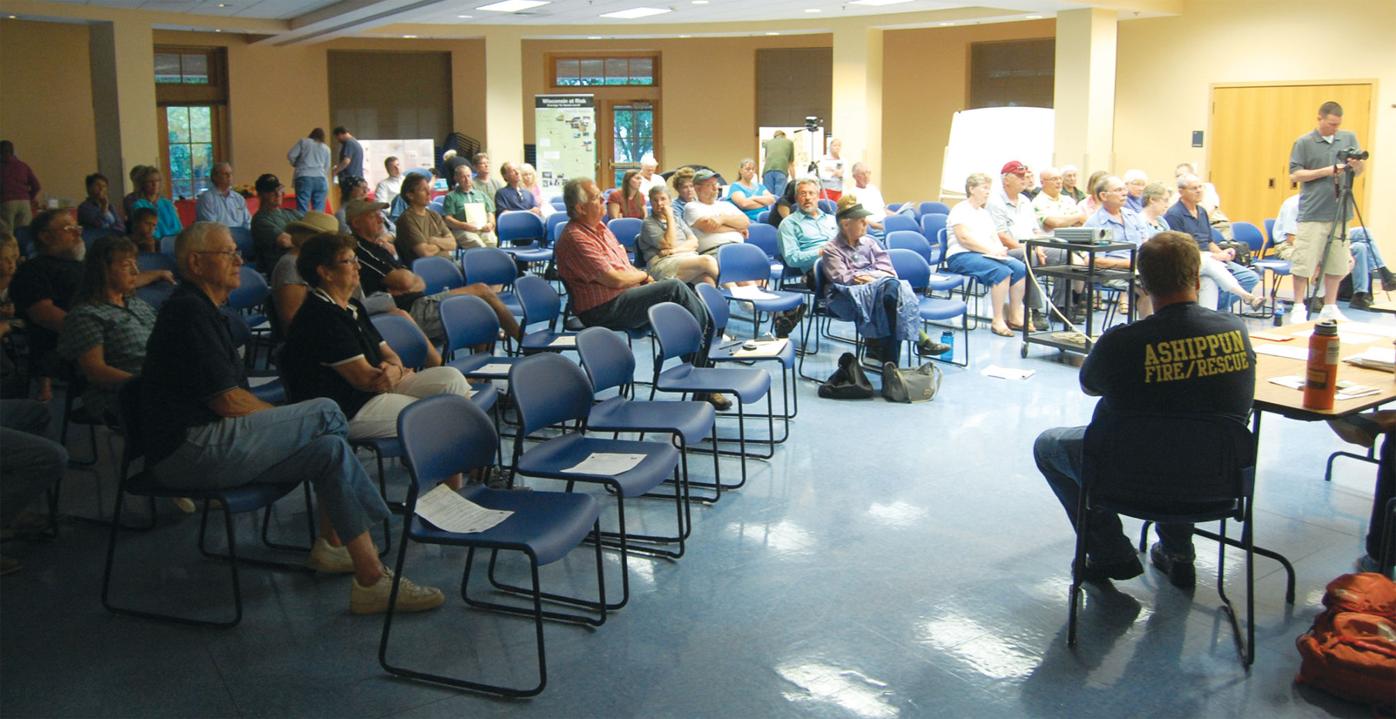 There was a sizeable crowd, including homeowners along the pipeline, who made there way to July 14’s forum at City Hall in Lake Mills. The forum touched on the many concerns southern Wisconsin groups have about Enbridge’s Line 61 expansion and the possible Line 66 expansion as well.

An attendee at July 14’s pipeline forum checks out a map showing where the Enbridge pipelines are in Wisconsin.

There was a sizeable crowd, including homeowners along the pipeline, who made there way to July 14’s forum at City Hall in Lake Mills. The forum touched on the many concerns southern Wisconsin groups have about Enbridge’s Line 61 expansion and the possible Line 66 expansion as well.

“I’m certified by Enbridge to respond to a pipeline disaster. If that doesn’t scare you, it ought to.”

Those were the words of Ronni Monroe, member of WiSE Alliance and founder of Brave Wisconsin, said at a community forum on the Enbridge pipelines July 14 at Lake Mills City Hall.

There are currently four pipelines run by Enbridge, Inc., an energy company based out of Calgary, Canada, that transport as much as 560,000 barrels of tar sands crude oil from Superior to various parts of Illinois. The pipeline that has drawn the ire of environmental watch groups over the past few years has been Line 61, which Enbridge would like to upgrade so it can begin to transport 1.2 million barrels of oil per day from Superior to Pontiac, Ill.

Right along the pipeline corridor, which includes Line 61, Line 13, Line 14 and Line 6A, Enbridge has done surveying for a potential Line 66. Line 61 and 66 were both the big topics of conversation at July 14’s forum.

Concerns Over the Quantity, Insurance

The concerns with the expansion of Line 61 is that Enbridge’s environmental record is not 100 percent clean, it has never handled an oil pipeline of this size and could require local and state government to pick up some of the cleanup tab if a spill were to occur.

The expansion of Line 61 has been held up in court as Enbridge filed a lawsuit against Dane County in January, contending it was unlawful to require the company have an extra insurance policy for its town of Medina pump station.

Since Enbridge announced its Line 61 Project, Dane County has maintained a $25 million spill cleanup insurance provision on its conditional use permit for a town of Medina pumping station. However, a last-minute provision of the 2015-2017 biennial state budget that was signed into law in July 2015 prohibited counties from requiring extra insurance from pipeline companies.

Therefore, Enbridge filed a lawsuit in January after the provision was kept in the conditional use permit. Just one month later, a group of Dane County landowners near the Medina pumping station filed a lawsuit contending the state law was not retroactive and the insurance condition should stand.

The insurance question has arisen after an Enbridge-owned pipeline in Kalamazoo, Mich., ruptured in 2010 and caused the largest tar sands spill in U.S. history. More than 1.1 million gallons of crude oil leaked from the 6B pipeline into Talmadge Creek and then into the Kalamazoo River.

The spill took Enbridge 17 hours to discover and has subsequently cost more than $1 billion in cleanup efforts.

What made this spill more dangerous is the type of destruction crude oil can wreak on an environment.

“Crude oil is 14.5 times more expensive to clean up than regular oil. Tar sands oil costs $27,000 per barrel to clean up,” said Elizabeth Ward, Programs Coordinator for the Sierra Club – John Muir Chapter. “Spills require special responses, strategies and tactics. Those we do not have right now, and that’s why this is such a concern to so many people.”

The Kalamazoo River spill was expensive to clean up (cleanup is still ongoing from that spill) because of the corrosiveness of tar sands oil. Many different chemicals are mixed with tar sands oil in order to get it to flow through a pipe.

Thus, when the cleanup process began, the Environmental Protection Agency had to dredge certain portions of the Kalamazoo River as the tar sands oil settled into the riverbed.

“Cleanup problems are terrible. Once cleanup crews locate submerged oil, it is difficult to extract without destroying the riverbed,” said Dr. Mary Beth Elliot, Professor of Pharmacology at UW-Madison. “Tar sands and their diluents are not natural parts of the environment.”

When the Line 61 expansion occurs, it will carry up to 1.2 million barrels of crude oil per day across 16 counties in Wisconsin and into Illinois.

Enbridge pipelines in Wisconsin have ruptured at least five times since 2003, including a 1,200-gallon spill that poured out through a 4-foot-long split in an underground pipe in Adams County in 2012.

So the question becomes not if, but when.

Fire departments are where one of the main issues in safety lies. Many rural, volunteer fire departments are dealing with staff shortages. In fact, a committee has been put together by state lawmakers to look into what can be done.

What is even more concerning is that if a spill happens, fire departments might not be properly equipped in order to fight a spill if one were to happen.

Foam needs to be used in order to cover a spill that starts of fire, since tar sands burns at a very high temperature. Effective extinguishment of crude oil fires requires the use of hydrocarbon foam concentrates and appliances for application of foam.

“As a firefighter, there is no fire department in the state that has enough foam to combat an oil spill (from Line 61),” said Jerry Hoefs, a former firefighter with Ashippun Fire Department. “A pipeline is a magnificent, man-made machine. But every man-made machine has failed in its lifetime.”

Tar Sands also differs from normal oil in that it needs certain diluents in order to travel through a pipeline. One of the diluents used in the transport of crude oil is benzene, a very toxic chemical.

There is also natural gas and hydrogen sulfide going through the pipeline, which could create other hazards.

“It can be batched so different products can be transported, making it more dangerous,” Hoefs said. “First responders going to the scene really won’t know what is in that pipeline.”

Elliot said benzene has a safety limit of 0.1 ppb for occupational workers, and there is somewhere between 1.0 to 1.8 ppb in the diluent used by Enbridge.

Benzene can cause acute symptoms, such as headaches, dizziness and nausea. Those symptoms were present in some people after the Kalamazoo River spill.

“There are no studies showing the long-term health risks to exposure to tar sands,” Elliott said. “Health effects were seen in both the Kalamazoo spill and in the Gulf oil spill.”

If a spill were to happen, one of the other concerns is evacuating the area around the pipeline.

Monroe said a safe distance to get to after an oil spill is 1,500-feet away from the pipeline.

But for some homeowners along the pipeline, especially in the Lake Mills area, that might not be the easiest objective to accomplish.

Since the gas that leaks from a pipeline is lighter than the air, homeowners who live directly below the pipeline in a valley would have to traverse through the wilderness in order to make it to safe ground.

Cars, cell phones, flashlights or anything else that could create a spark should not be used after a spill. For elderly people and families with young children, trekking through backcountry without any lighting, save for a glow stick, would be an incredibly difficult task.

“If you’re in a valley and the pipeline is above, you might be in trouble,” Hoefs said. “For the first 15 to 20 minutes before firefighters arrive, you’re pretty much on your own.”

Homeowners who are not willing to give up their land if Enbridge decides to move forward with its Line 66 project would face many challenges in order to keep their lands.

A provision in last year’s state budget could allow Enbridge to expedite any eminent domain claim it files against a landowner.

A last-minute budget provision, that documents have shown was written by Enbridge’s attorneys, gives the Public Service Commission the right to approve any eminent domain claim made by a “business entity.” The language used to read “corporation.”

The provision has received widespread criticism since the enactment of Wisconsin’s budget bill due to the fact a staff member of Assembly Speaker Robin Vos requested Enbridge attorneys speak with drafters on the language change.

“I dug a little bit deeper and found out that not only is this law firm on the payroll with Enbridge, but also has its partner attorneys on the board of directors on the department of land trusts (in Wisconsin),” Environmental attorney Chris Gutschenritter said. “This provision opens up our eminent domain laws in Wisconsin to dramatically increase the ease and likelihood of Enbridge’s authority to take land from landowners, specifically for Line 66.”

Gutschenritter said any landowner who does not have an attorney who is well versed in eminent domain laws should get one right away. They should also have an appraisal of their land done right away.

Rail Not a Better Option

Canadian and North Dakotan oil companies do not necessarily need pipelines in order to transport crude oil. Many companies have expanded to using rail to transport their oil from the source to a port for exporting.

Sarah Zarling of Citizens Acting For Rail Safety was there at the forum to explain that rail transportation of crude oil is not a perfect second option.

“The tank cars that haul explosive oil were designed to carry things such as corn oil. They have been known by the Department of Transportation, since the 1990s, to be prone to puncture,” Zarling said. “Government oversight and regulations are incredibly lax and abysmal and the oil and rail companies are left to their own devices to make their own rules.”

Rail transport of crude oil was a big topic of discussion and controversy even before the Lac-Mégantic, Quebec rail disaster. The disaster resulted from a train derailment in the downtown area of Lac-Mégantic, and the subsequent explosion and fire resulted in 47 deaths and the destruction of 30 buildings.

Zarling’s worst fears were nearly realized Nov. 8, 2015, when a train carrying oil tankers derailed right next to her family’s home in Watertown.

“Not more than a few blocks away from the house, there were a few tankers that had fallen off the track,” Zarling said. “I immediately got my family in the car and we drove a safe distance away.

“I distinctly remember the horror I felt watching the brave first responders spray down the tankers and the many people milling around wondering what had happened. It is beyond a miracle that the tankers that derailed didn’t ignite, especially after it had crashed into a building where there’s an electric generator and had caused a gas leak from that building.

“I am utterly resentful our lives were put in grave danger like that.”