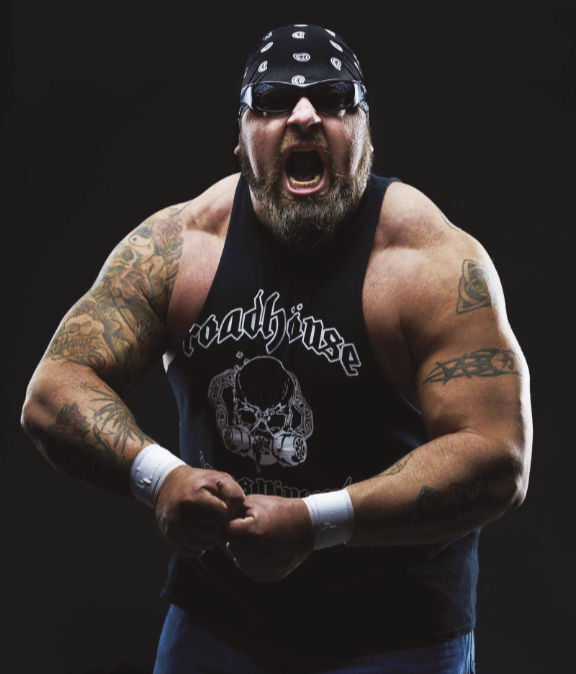 Waterloo-native Roadhouse James Vincent (real name James Brown) is ready to entertain the hometown crowd later this month. He expects it will be an emotional night and looks forward to having family, friends, and former classmates and teachers in the audience. 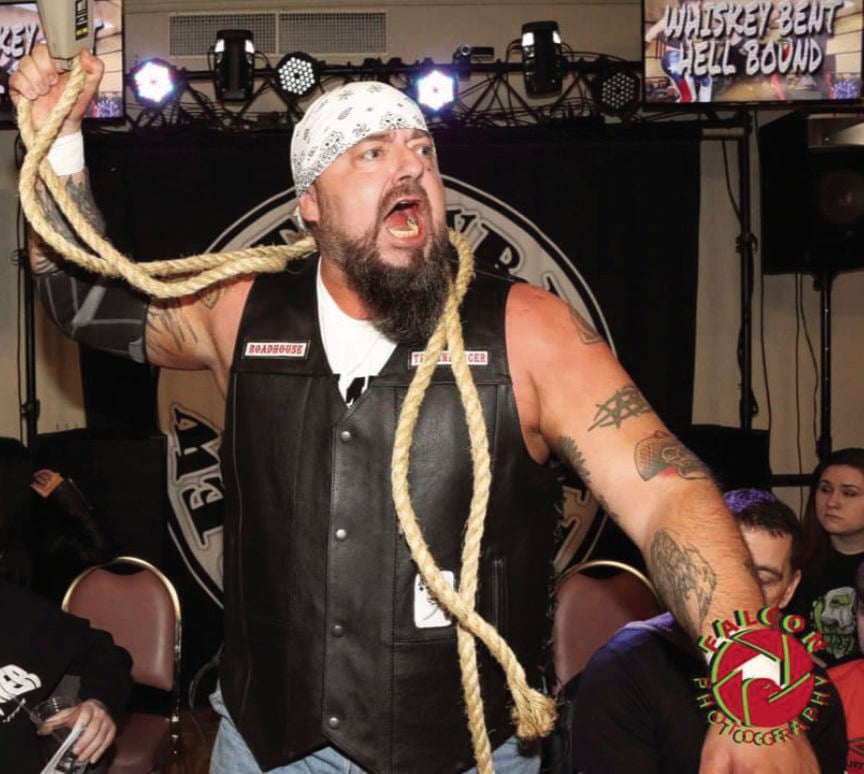 Roadhouse James Vincent makes his way to the wrestling ring during a show.

Roadhouse James Vincent, who grew up in Waterloo, flexes for the camera. An injury sustained before he started wrestling nearly curtailed his career in the ring. Now, after overcoming the obstacle of broken vertebrae, he takes nothing for granted.

Waterloo-native Roadhouse James Vincent (real name James Brown) is ready to entertain the hometown crowd later this month. He expects it will be an emotional night and looks forward to having family, friends, and former classmates and teachers in the audience.

Roadhouse James Vincent makes his way to the wrestling ring during a show.

Roadhouse James Vincent, who grew up in Waterloo, flexes for the camera. An injury sustained before he started wrestling nearly curtailed his career in the ring. Now, after overcoming the obstacle of broken vertebrae, he takes nothing for granted.

As Roadhouse James Vincent enters the ring, he’s often met with boos and people giving him a thumbs down. In wrestling terms, he’s the heel aka the villain of the match who will do almost anything to win against the protagonist, known as the face. It’s Roadhouse who will take the jeers from the crowd. But later this month, he might just get to be on the other side of the heroics when he returns to his hometown.

Roadhouse, whose real name is James Brown, will take part in the Battle of Waterloo hosted by amateur wrestling league Frozen Tundra Wrestling on April 30 at The River’s Edge Venue.

Being able to wrestle in Waterloo “is a dream come true.”

“I’ve been counting down the days like a kid before Christmas,” said the 37-year-old. “It means a lot for me to do this in front of a hometown crowd. It’s going to be quite an emotional night, I think.”

He’s eager to have friends, family, and former teachers and classmates watch him wrestle.

“I’m almost 38 and (wrestling) has been my obsession since I was a little kid,” he said.

Roadhouse moved to Waterloo with his family in 1988 and spent most of his life in the city, graduating from Waterloo High School. Seven years ago, he moved to Oshkosh where he is employed at a metal fabrication center.

Prior to joining the Wisconsin-based amateur wrestling league, Roadhouse had not stepped on a wrestling mat during his school days nor was he a performer in school plays or musicals, though both are skills he uses when entering a match.

“I actually used to stand in front of the mirror or was in the shower and would recite the wrestling promos I would hear,” he admits.

Now, the Wisconsin wrestler is making promos for shows and getting the chance to live out his obsession.

“It’s a big part of our lives and a huge deal at home,” he said; Roadhouse’s wife Jennifer participates under the persona of Stacy Shadows.

As Roadhouse approaches his 10th year in wrestling, he explained why he is still stepping into the ring for shows.

“Once you go out and do it, nothing compares to it,” he said. “It’s the ultimate adrenaline rush. To go out there and be a performer at that level, there’s really nothing that can beat that.

“The minute that crowd either boos and say mean things to you or to make them cheer and think you’re the greatest thing in the world, it’s quite an experience to have,” Roadhouse said. “I’m going on 10 years and I still get nervous, I still get butterflies before I go out there.”

Taking nothing for granted

Roadhouse might be a heel, but his origin story is more like that of a hero who overcame obstacles in pursuit of his dream.

“My earliest childhood memory is it was one of my weekends with my dad is watching World Class Championship Wrestling out of Dallas, Texas,” he said.

Roadhouse was hooked, watching the matches whenever he had the opportunity; his favorite childhood wrestler was good guy Hulk Hogan.

It was November of 2011 when Roadhouse had his first taste of amateur wrestling.

“I always wanted to try it,” he said. “I didn’t want to have the whole ‘what if’ thing. I just went online and looked up wrestling schools in the area and I found Brew City Wrestling out of Waukesha.”

A month after contacting Brew City and meeting with the trainer, Roadhouse attended a wrestling fantasy camp that provided an insight into the performance sport. It was an opportunity to find out if he wanted to pursue the childhood ambition further.

“I was immediately hooked,” the Oshkosh resident said.

His involvement in the league quickly evolved from setting up the ring before public matches to stepping into the ring to compete.

Roadhouse was fast-tracked through the program, training with Matt Winchester, known to Ring of Honor wrestling fans as the Brew City Bruiser.

“A lot more learning came in the cars or in the bars,” he said. “You’d buy a veteran a beer or two or a pitcher and ask questions and learn from them.”

While the more formal training was on the weekends, Roadhouse spent a lot of time at the gym or watching and studying old film of WWE wrestling – everything from the physical aspects of wrestling to creating event promos.

The Waterloo resident was given the opportunity of a lifetime, but there was some negative news on the horizon.

After about 18 months after he started wrestling, Roadhouse decided to get checked out by a physician. He’d been in a car accident in 2010 before he started on his journey into the ring. Lacking health insurance at the time, the wrestler chose not to go to the hospital to check for injuries.

“I went in and they told me, ‘Your neck is broken. If you keep doing this, the best case scenario is you’ll be paralyzed.’ And that was pretty heavy. I called Matt, my trainer, and I was crying and so upset,” Roadhouse said. “Imagine getting a taste of your lifelong dream and then have it taken away.”

Since Roadhouse was entertaining and worked the crowd so well, he shifted from the role of wrestler to bodyguard/manager for a fellow wrestler. It was during this period he took on the name and persona of Roadhouse.

“They said ‘we need to get you a good bodyguard name,’” he said. “Somebody said, ‘too bad he’s not a bouncer like Patrick Swayze in Roadhouse.’ And you just saw everyone’s eyes light up like ‘you’re Roadhouse, that’s it.’”

For nearly four years, Roadhouse stayed as a manager/bodyguard. Eventually, he went to get some MRIs completed and discovered his C4 and C6 vertebrae were compressed on one side and some of his vertebrae were shifted and on his spinal column.

The wrestler was told his injuries were in need of immediate attention or could be fatal.

Roadhouse had a double neck fusion – a plate was placed over his C 3, 4, 5 and 6 vertebrae in January 2017. He took the year off to recover and slowly returned to the ring in 2018. After working out with Winchester and taking a few bumps, Roadhouse physically felt fine.

Enthusiastically, he returned to the shows.

“By the grace of God I was given a second chance and I don’t take anything for granted anymore,” Roadhouse said. “I know anything can happen so I’m going to do what I can to have a good time and put on a good show and live the life I want to live.”